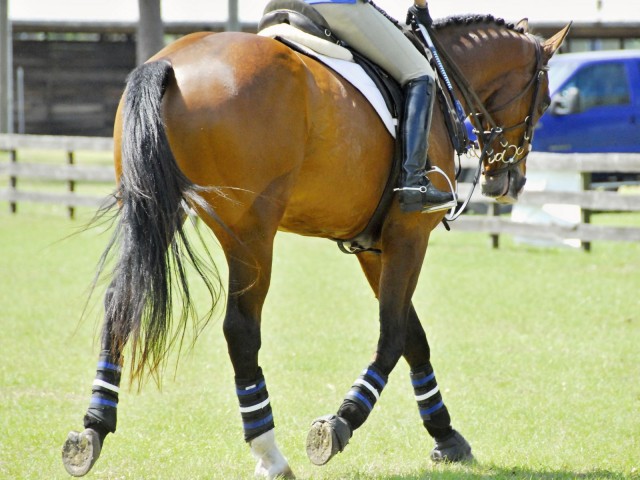 Yesterday I had the great pleasure of cross-country schooling at Longwood in Ocala, FL.  I know, all you snowed-in northerners are completely sick of reading stories about the Lucky Few down south enjoying the sunshine, while your first-of-the-year outings are still weeks (or months) away.  I’m sorry…I know your pain, I used to be one of you!

Nonetheless, I enjoyed cross-country schooling yesterday with my three horses.  One of them has already competed twice this year; the goal with him was to test out a different bit for better brakes.  But it’s Longwood, it’s like Disneyworld for eventers, so you know he had some fun jumping a few things!  He felt excellent, very bold and brave, yet responsive in a three-ring gag.  He formerly went in a rubber mullen pelham, but it became too much bit and caused him to curl, despite the snaffle rein.  For two cross-country outings I used a slow-twist Dr. Bristol…it worked okay the first time, and then was an utter failure at the second event.  The three-ring gag, with reins on the snaffle and second ring, seems to earn enough respect to half-halt effectively, while keeping him elevated and not rolled up.

We practiced a few things that he hasn’t yet seen in competition at Training level– a trakehner, a double bank question in and out of water, mounds and skinnies.  Longwood is so fantastic because all these “upper level” questions are presented at low, inviting heights.  It builds great confidence in the horses, while exposing them to situations they will see later in their careers.

So that was the easy horse.  The other two on the trailer were much greener.  You may remember Aero, from last year’s stories.  Now five years old, he’s still with me after a short term lease/purchase didn’t work out this fall.  I just got him back in February, and he needed a bit of weight and reschooling.  He’s coming back into fine form, and was ready for his first cross-country school since last September.

The vast array of jumps scattered in the schooling field were a bit overwhelming to poor Aero, so we trotted a lot of small things to let him settle.  As we went on he got into a good rhythm and began looking for jumps to do.  He’s really a horse who loves to be challenged; the more you throw at him, the better he focuses and tries.  He jumped banks, water, and the ditch with boldness by the time we finished.  He’s a quirky little horse, a bit of a mental workout, but he has the physical parts to grow into a very nice horse someday.  His first competition is coming up this weekend; I don’t have high expectations for scoring well, but the experience will be very good for him.

The other green horse is REALLY green– like fluorescent lime green.  A four-year-old filly, she’s been off the track for about three months.  She has an incredibly mature mind, however, and I’m very excited about her for the future.  She has taken to jumping like a duck to water, and naturally canters around on the lightest rein in great rhythm.  With the way she snaps her knees over fences, she could make a hunter, if this cross-country thing doesn’t work out….

So yesterday was her introduction to Jumps That Don’t Fall Down, a variety of logs, bushes, tiny banks and baby ditches.  While it felt like she would rip my arms out at a trot going crooked in all directions at once, as soon as we picked up a canter she settled into her loopy rein contact, balanced and straight.  Thoroughbreds– they’re bred to canter and gallop, remember, not trot!  She hopped over some small logs, wiggly as most green horses are, but with bravery and willingness.  She cantered some bushes, jumped me out of the tack, and enjoyed herself greatly.

Ok, so she could jump natural jumps.  What about the real stuff, water and ditches and banks?  We stayed at the small end of the ditches, but she didn’t even blink once.  The baby bank was nothing more than a simple step, which made complete sense to her.  And then she sealed the deal, barely hesitating on her first ever approach to water.  At home, she’s like a fish…she plays in her water tank up to her eyeballs, and willingly splashes through any available puddle.  A water jump is just an excuse to get wet!  By the end, she was hopping up and down the tiny bank in water with her ears pricked.  Success!

You can pick out some really nice eventing prospects– good conformation, good mover, good jump– but you never know if they’ll hate ditches, or water, or galloping alone away from the group.  That first cross-country school is a glimpse into the horse’s future: can they make it in this sport?  Do they have what it takes, the desire to jump crazy obstacles between the flags?  While a 2-foot log and trotting into water is no indicator of Advanced potential, it can give you insight into the horse’s innate willingness and natural enthusiasm.  It looks like I’ve found another one who wants to play the game– and I’m so excited to see where she goes.