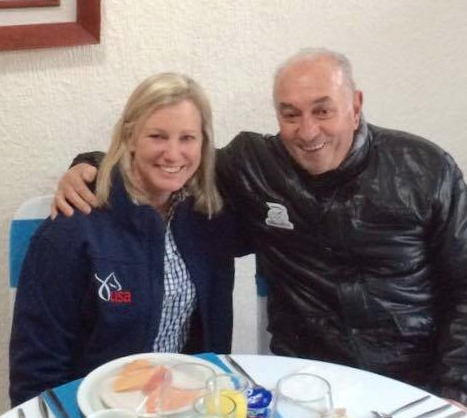 It’s an exciting time for Karen O’Connor, Mexico and eventing as a whole after last week’s announcement that she will immediately take up the role as coach of the Mexican eventing team. More than two years after the rotational fall that ended her riding career, Karen said she finally felt ready to take that next step professionally.

“I’ve had people around the world talk to me over the last few years about whether I would be interested in coaching,” Karen said. “At that point, I didn’t feel like I had completely recovered from my back surgery and had enough stamina to take on the job.”

Then Sue Ockendon, Bromont’s event director who has worked extensively to boost eventing’s presence south of the border, called Karen around Thanksgiving last year to speak to her about Mexico’s fledgling eventing program.

While Mexico sent teams to the 1976, 1980 and 1984 Olympic Games, the country hasn’t been back since. Now a new generation of eventers is committed to expanding the sport in their country and becoming competitive on the international stage. It’s a key aspect of a larger rebirth and revival of eventing in Central and South America.

“A number of riders, especially Canadians and Americans, have been working very hard to grow the sport in these countries,” Karen said. “There has been a tremendous amount of energy, and the infrastructure is already there thanks to amazing work from a lot of people.”

“There’s a great commitment from the various groups in Mexico — a large group from the army that is very excited about promoting eventing within the army, as well as a civilian group with many riders we already know that have been back and forth through the U.S. It’s a big enough group to start a program for sure.”

When Karen visited Mexico for the first time while exploring the opportunity, she found numerous signs that the country, which has never had an international coach for eventing, is ready to grow its program — from a 2,000 mare breeding station that is producing impressive offspring from North American, Irish and English stallions to a very determined group of athletes.

“They have one major goal, which is to learn and become competitive riders on the world stage, however long that may take,” Karen said. “It’s really exciting for me to be a part of that.”

The immediate goal for the Mexican team is to get as many riders as possible qualified for the Pan American Games in Toronto,  she said. Some of the riders will stay in Mexico to earn their qualifications, while others will come up to Florida to qualify.

While only one Mexican rider is currently qualified for the Pan Ams, Karen said many of the eligible athletes have completed a CIC* and CCI*, which until recently was the highest level of competition offered in Mexico at the country’s venues with FEI courses: Perote, Mexico City, Cholula, Veracruz and Huixquilucan de Degollado.

Thanks to John Williams’ work to expand the cross country course at Perote, Mexico will now be able to offer a CCI2*, which is scheduled to be held next month, and plans are in the works to hold a CCI3* in September.

All riders who qualify for the Pan Ams will base at the O’Connor’s farm in The Plains, Virginia, before the final Mexican team is selected toward the end of May. Karen said she is currently speaking to her husband, Team USA Coach David O’Connor, about the possibility of having the Mexican team join in on the Pan Ams prep trials at Great Meadow in June.

“The world is getting smaller. With the use of YouTube and the internet, the riders have a fairly good idea of what the standard is,” Karen said. “They’re talented athletes, and they really are committed to getting better. They have beautiful hands and great balance; they’re like sponges when we teach them, just soaking it all up.”

She also hopes to bring a group of her riders to Rolex Kentucky CCI4* in the spring to let them see the standard at this level firsthand, as many of them have never seen a four-star competition before.

“I want them to understand what the great goal is,” Karen said. “A lot of work has been done before I got this opportunity, and now the country is getting really excited about wanting to become competitive on the world stage at the two-star, three-star and four-star level. For me, it comes at a great time, and it’s a really good fit for me — writing a program from scratch. It’s very stimulating.”

Indeed, Karen has been waiting for an opportunity like this to come along since her retirement from competing. After David’s appointment as Team USA’s coach in late 2012, she found herself suddenly unable to participate in the USEF High Performance committees she’d sat on for 25 years due to the perceived conflict of interest.

For the past two years, she’s devoted herself to her students, teaching clinics, hosting camps and lecturing at symposiums, as well as sourcing horses in Europe with Marilyn Little for riders in the U.S. and Canada. And while she said she will continue doing all that, the opportunity in Mexico gives her a chance to be involved in a program on a High Performance level once more.

“If we get a country like Mexico to become competitive on the world stage, that’s a great thing,” Karen said. “Think of the IOC Charter; if I can help become a part of getting another nation involved in the Olympic Games, that’s a big deal for the FEI. That helps secure a place for our sport. I’m excited to help another nation be a part of the Olympic movement.”

Having another competitive National Federation so close to home can only help both Team USA and Team Canada alike, as it bolsters the playing field on our own soil and raises the bar at our events. Remember what Leslie Law said in his keynote speech at the USEA Convention? “What America is missing is the competition …”

Of course, Karen knows getting the Mexican team to the Olympics is still a very longterm goal, and she plans to take it one step at a time. Her contract currently goes through the Pan American Games and will be up for renewal at that time.

“Mexico would love to have a team qualify for (the 2016 Olympics in) Rio,” she said. “We’ve very early in those stages to see if that’s even possible; a lot of it is going to be evolving. But that’s certainly the quality of the work we’re looking for.”

In the meantime, we’ll be seeing many of the Mexican riders on American soil as they look to qualify for the Pan Ams, starting in March when they come up to Ocala. The riders who qualify will then move up to Virginia to train with Karen.

We look forward to getting to know these horses and riders and supporting them as they look to achieve their ultimate goal of seeing the Olympic stage. Considering the implications that would have for our sport as a whole, it’s something we can all cheer for.

We also wish the very best to Karen as she takes on this new role and would like to sincerely thank her for her time in this interview.