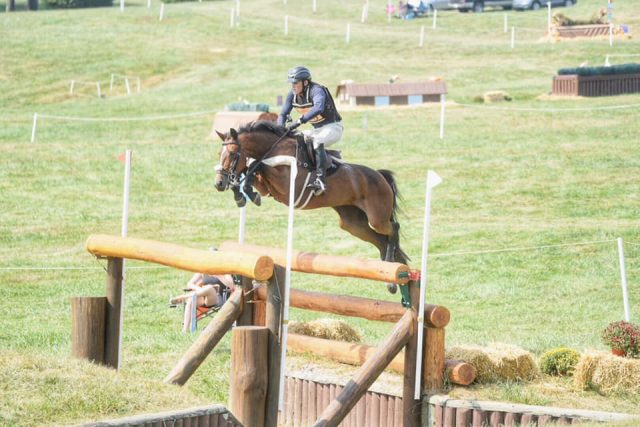 Bobby Meyerhoff has learned a lot from the smallest horse in his barn. Perhaps one of the greatest lessons a horseman or woman can learn is that of empathy. Without this all-important skill — one that doesn’t always come naturally, at that — it can be difficult to tap into the deepest, most locked away talents a horse possesses.

There is no handbook for empathy and horsemanship. All we have is the concept of feel, our own instincts, and our knowledge of how horses operate. Sometimes, we learn the most valuable lessons when we’re least expecting them.

This idea is what made Bobby chuckle to himself as he galloped through the finish flags aboard Fortuna, a 9-year-old Dutch Warmblood mare he’s produced from the ground up. The diminutive mare, who stands just 15.2 hands, had just completed her first CCI4*-S at Plantation Field. And while the pair came away with perhaps the most memorable photo of the event, artfully captured above by JJ Sillman, the story behind the photo is one that speaks volumes — if we’re willing to listen and dig deeper.

Fortuna (Nova Keur x Balou de Rouet) was feisty and hot-headed when Bobby first acquired her as a two year old. Right away, it was a lesson in patience for Bobby, who knew that he would need to listen to the mare in order to obtain her trust. Somewhere under that tough exterior was a careful and freakishly talented horse.

“It’s been a lot of slow and steady like a turtle,” Bobby explains. “I just have to keep telling her the same things: everything is ok, work your body side to side and let go, trust me. I’ve come to realize that she can be a little insecure — she has all this bravado and attitude, but underneath it she’s got some insecurities.”

Trust is something we all strive to achieve with our horses. Fortuna is “crazy brave and bold”, but sometimes this creates a potential for trouble out on a cross country course. We often discuss at length the shape a horse’s body should take over a jump. The distance we find to an obstacle dictates the shape and the efficiency of the jump. Bobby’s learned how to ride Fortuna forward to the base, which helps her tame the careful exuberance she displays. This carefulness and exuberance makes for an awesome photo, Bobby says, but the important thing to learn here is that this type of jump needs to be treated with caution.

“I had a sense that she would jump super high over that oxer at fence six,” Bobby recalls. “When she sees something she doesn’t know — and that was one of the bigger fences she’s seen — her instinct is to jump crazy high. And sometimes that power doesn’t carry over because she dedicates her inertia to getting up in the air but not necessarily over.”

By moving slowly with the mare, Bobby’s been able to smooth out her jumping technique over time. But it’s a constant question of balance for Bobby, who at 5’11 says he’s really had to fine tune his own balance in order to allow Fortuna to do her job. “If I move my upper body an inch, she moves,” he says. “So it’s actually made me have to ride better. I know she’s a super quality and has a lot of jump and scope, but I also know she’s giving me her all. So I know I have to be right there with her and everything has to be that much tighter.”

A newly minted Advanced horse, Bobby knows that with more time and experience Fortuna will continue to develop her jump. After that bold jump at the open over on Mike Etherington-Smith’s course last weekend, Bobby knew he needed to pay attention to his mare during the remainder of the course, which is certainly no slouch for even the most seasoned horses.

“The pictures are impressive, but they also mean she’s harder on herself,” Bobby explains. “I want her to be more efficient, and I think with more experience she’ll learn to use her talent more positively. You just have to be careful with horses like this and take your time with them.”

“She wasn’t scared, but she was impressed,” he continues. “I had to ride carefully at the next few fences after that just to make sure she hadn’t lost confidence after that big effort. And she really started to get better — she let me ride her to a better distance and listened to and trusted me rather than just looking at the size of the jumps and reacting on instinct.”

Bobby knows he’s sitting on a star. He knew it before he set foot out on Plantation’s cross country. And over the last seven years of creating a bond with the sensitive Fortuna, he’s been able to fine tune his sense of empathy and of knowing exactly what type of ride his horse needs on that day. That day, Fortuna grew up a little, and Bobby felt that much closer to cracking the code.

“Walking to the cross country warm-up, I had a little chat with her,” Bobby says with a laugh. “I said, ‘Ok, I’ll make you a deal. I’m going to trust you and go with you out there, but you have to trust me too. So let’s meet in the middle.’ And she went out, she got a bit impressed, but she listened to me and she took that and got better and better.”

Crossing the finish flags, Bobby was overcome with an emotion that elicited a chuckle from him. “It was something like, I can’t believe we just experienced that together.”

Bobby says he’s not concerned with ticking off goals at a specific point in time with his and his wife, Danica’s, talented mare. “I think it’s easy to say ‘Ok, they’ve done this level, now it’s time to move up,’ but I think that’s where you can get into trouble. If you don’t take the time to look beyond the qualifications on paper and ask yourself if the horse is truly ready for the next challenge, you may end up with a horse or a rider that has lost confidence.”

They say that if you can get a mare on your side, the sky may just be the limit. Even though Fortuna hasn’t been easy to get close to, he says every bit of this journey has been worth it and a testament to the idea of patience and empathy for the horse and what it needs. Horses, after all, aren’t so complicated, at the end of the day. They just need someone willing to listen.