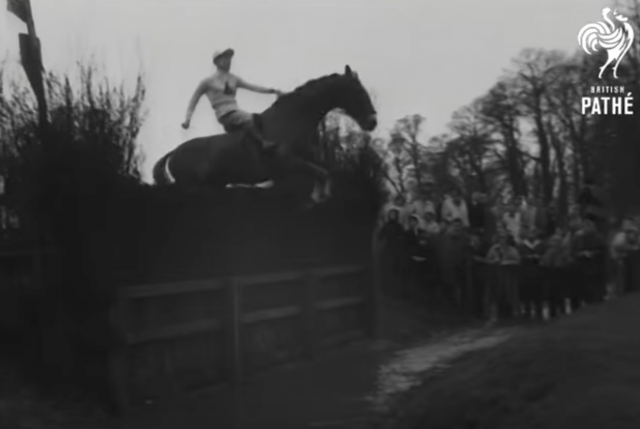 … the event has endured a long and complicated relationship with the weather — rain in particular. May is one of South Gloucestershire’s wettest months and excessive precipitation has wreaked havoc on the event on multiple occasions since its inception in 1949.

According to Badminton.com, for the event’s first 10 years running dressage and show jumping were held on the old cricket grounds in front of Badminton House. In 1959, “after torrential rain turned the park into a sea of mud,” the arenas and trade stands were relocated to their present positions.

Riders know to pack their big-boy studs for Badminton’s cross country course, which has historically rewarded riders with sticky britches and horses with an ability to shift into four-wheel drive when the going gets boggy. But on a handful of occasions, conditions were deemed too waterlogged for even the toughest mudders. Inclement weather has caused the cancellation of the event on four occasions: 1966, 1975, 1987 and, most recently, in 2012.

In 1963 Badminton was downgraded to a one-day event on account of “terrible weather” in the months leading up to the event. This film reel from moving picture archive collection British Pathé shows spectators’ cars being towed out by tractors and a cross country course that looks downright treacherous.

Of 13 starters that year only six horses finished and, in general, it wasn’t a pretty sight. Exhibit A: the horse/rider combination that fell into a muddy ditch on the backside of the jump, at which point the narrator triumphantly reports: “One fall doesn’t daunt a rider of the Colonel’s caliber, so he remounted!”

One needn’t look too far back in the rear view to identify another Badminton that produced similar results. At the 2014 horse trials, wet and windy conditions contributed to a cross country day marked by thrills, spills … and more spills. Of 77 starters only 35 completed, with 24 going clear and nobody making the time. Australian Sam Griffiths and Paulank Brockagh moved up from 25th place after dressage to win the event thanks to the scrappy mare’s heroic jumping efforts.

Here’s to a safe and partly sunny Badminton 2017! Keep it locked on Eventing Nation for live reports from all the action.