There are so many event horses out there who, while they may not have quite made it to Rolex or the Olympics, deserve to have their stories told. Honoring these special equines is the premise of our “A Tribute to the No-Name” series, dreamed-up by East Tennessee eventers Erika Adams and Katherine McDonough. Today, Mary Jo Downen shares the story of Mighty Mouse, her "never say can't" horse. 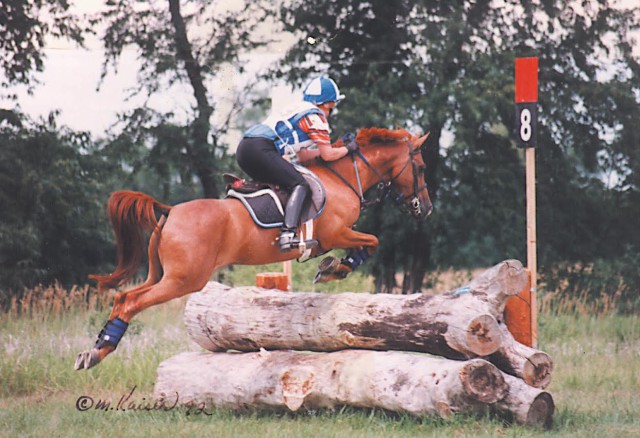 Mighty Mouse passed away on July 5, 2000, at the approximate age of 21. Those active in Area IV eventing in the late ’80s and early ’90s might remember Mighty Mouse for several reasons. First of all, he was a 14-hand Arab in a sea of Thoroughbreds and warmbloods.

Secondly, in spite of these two strikes against him, he was in the ribbons … a lot. I would like to share our story because I believe it can inspire people who don’t believe they can succeed at the sport of eventing without spending lots of money on the “right” horse. Mighty Mouse was the “wrong” horse who just happened to get it right. 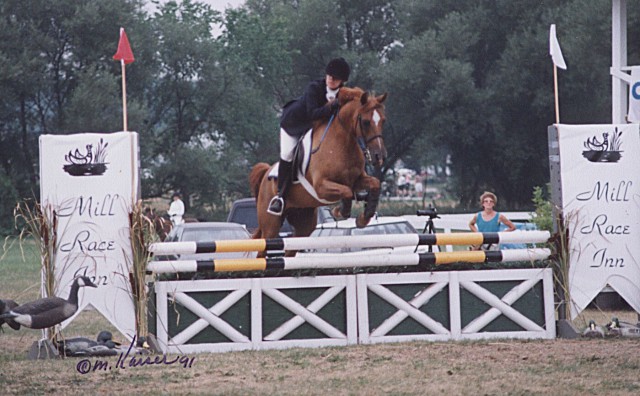 Mighty Mouse was found running loose in a fairly populated area by some friends of mine in the late 1970s. He had an Arab freeze brand which indicated he was a purebred, but did not have a readable registration number. After notifying the police of their find, my friends were eventually given ownership when no one stepped forward to claim him. After failing to make a trustworthy riding horse out of him (he dumped my friend and sent her to the hospital), they contacted me when they had to move and couldn’t take him.

I had been horseless for about eight years, and a green-broke 14-hand Arab was not a horse I should have considered buying. However, my friends were desperate to place him, and he was pretty enough. I figured for $200 I could put some saddle time in, get him more broke, and sell him as a lady’s or child’s horse, ideally making enough money to purchase a “real” horse. 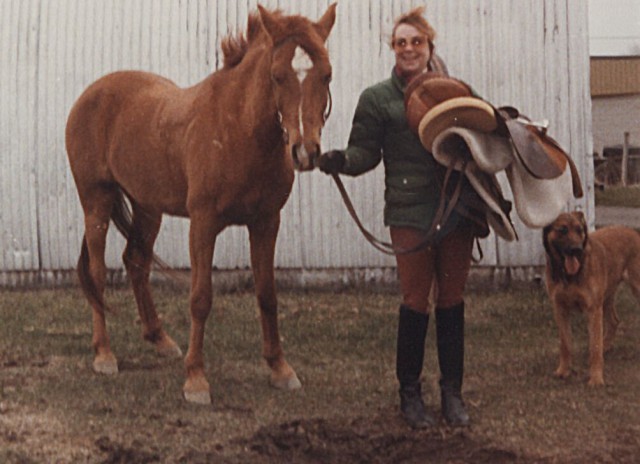 First meeting (fall 1984): My first ride on Mighty Mouse. He ran away with me! Photo by Ron Downen.

It quickly became apparent that Mighty Mouse was no lady’s horse, let alone a child’s. Greener than grass, he was a chronic bolter and runaway until the day he passed on. But back then I was starved for horses. I had sold my outgrown pony when I was 17 after I had completed one horse trial, and I sorely wanted to do it again. I made a few attempts to sell him, but there were no takers. Supporting two horses was not in the budget at the time, so Mighty Mouse was going to learn to event.

Always a forward horse, he took to jumping pretty well. People always commented on how confident he was over fences, but the truth was, he really wasn’t as confident in himself as he was with me. And I was just too naive to be afraid, so away we went! Our first mini event was at Chrislin Farm, and although our dressage was dismal, he jumped the cross country clean and had one little runout in stadium. I was hooked! 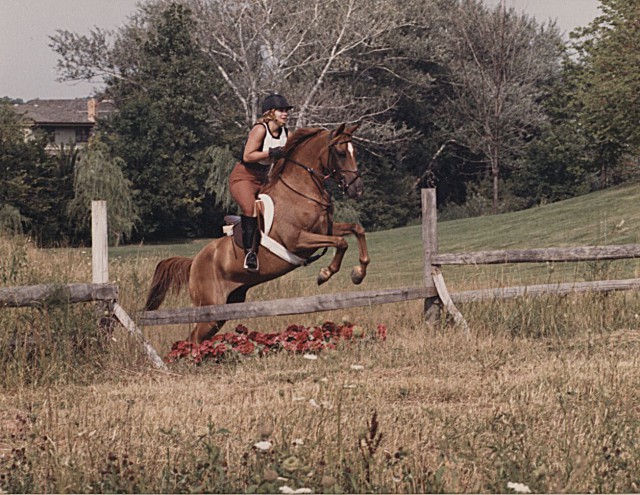 The next year I took him Novice, with the same results. Almost always dead last after dressage, he zipped around cross country and stadium clean and fast (and often out of control!). Although I was thrilled just to be showing, I quickly realized that if I ever wanted to get a ribbon, I needed to improve my dressage. People commented that although he was cute, he would never do well in dressage because he was an Arab. Well, he was the only horse I had, so I sought out help.

My friend Jill (to whom I’ll always be grateful) introduced me to Barb, the trainer who would change both my own and Mighty Mouse’s lives. Barb had a great approach to dressage because she had a pure and honest love for it and for the horses. When we first came to her, her attitude was “let’s get to work!” She never said anything negative about him, but rather worked on MY riding, stressing that as I rode better, he would improve. She was right!

After about a year of hard work, people starting noticing a difference. Instead of last place in dressage, I would be in the ribbons! When people asked me what I was doing, I said a lot of lunging and work on my position. Nobody could believe it was the same horse that a year before was upside down and high-headed in the dressage ring.

And I am here to tell you that judges DO NOT look down on breeds such as Arabs! As our work got better, so did our scores. I only encountered one judge in my entire six-year eventing career who I felt judged us unfairly. And while his inherent tension was always a challenge, his pure gaits and our ever-improving accuracy in our tests put us higher and higher in the ribbons until there was nowhere to go. We were first!

Coupled with our clean jumping, Mighty Mouse gained a reputation for winning the dressage and finishing on that score. I now have more blue ribbons and trophies than I ever thought I could win in a lifetime, and all on a little Arab that wasn’t supposed to be able to do it. 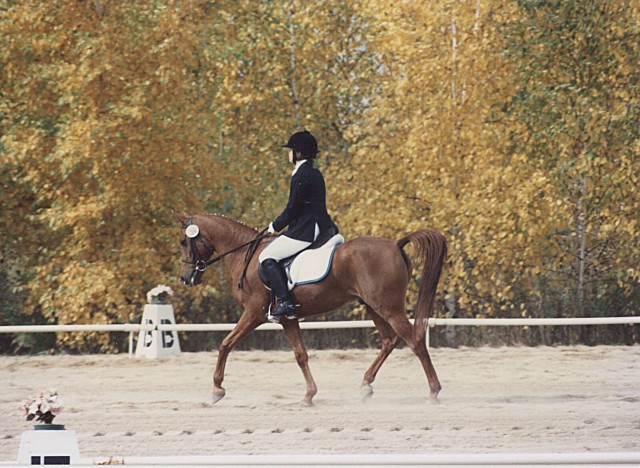 Dressage at Evergreen Farm (October 1991): On his way to another win at Training level. Photo by Bernadette Hare Chvoy. 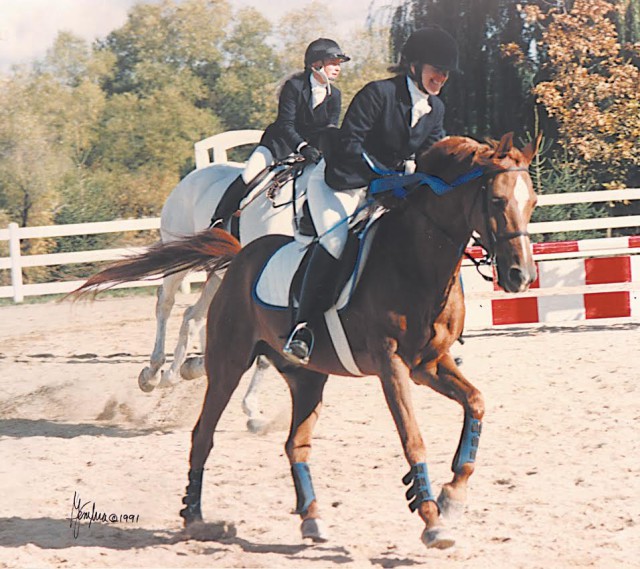 After two years of winning consistently in Novice, I began to think about moving him up to Training. Again, I heard: “You can’t take him Training; he’s too small.” And I agreed! Those Training jumps scared me to death! But I slowly started schooling Training level cross-country while I was still competing at Novice level. And he could do it! After I had successfully schooled the local cross-country courses, I knew I could compete at Training level.

Training level was definitely more of a challenge for my little horse. The extra height, faster time and his advancing age all challenged him. I particularly noticed this in the stadium phase, where I had to push him round for the first time; I had always struggled to rate him in the past. 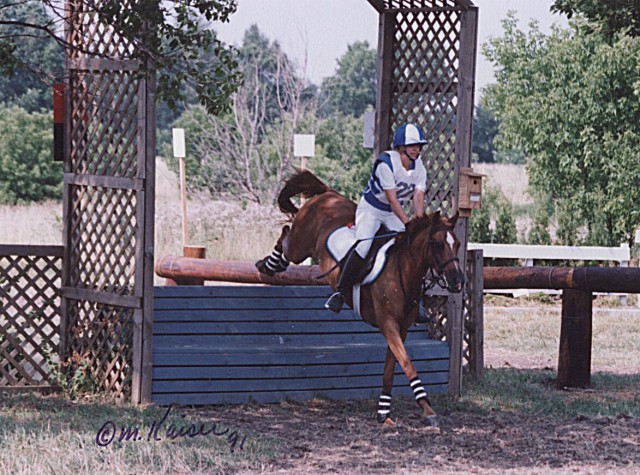 But in the two years I competed at Training level, he never placed below fifth, and he had several wins, the most notable being at the Fox River Valley Horse Trials, where he won a perpetual trophy for the best Training score of the event. All my dreams had come true, and all on a horse no eventer would have looked at twice. 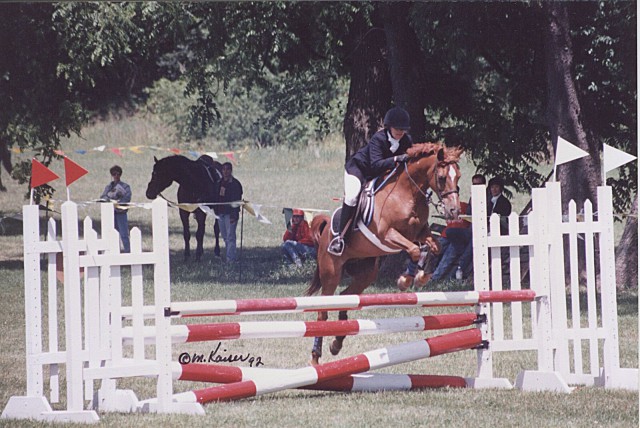 I retired Mighty Mouse in the fall of 1992 because I felt that he was competing at the edge of his abilities, and I wanted him to go out on the top of his game. At his last event, the fall Silverwood Horse Trials, he finished second, and we were surprised with a special “goodbye” ceremony and a gift of a halter from the event organizers. Shortly after, my husband and I purchased our farm, and he lived his last years in the comfort that he had earned. 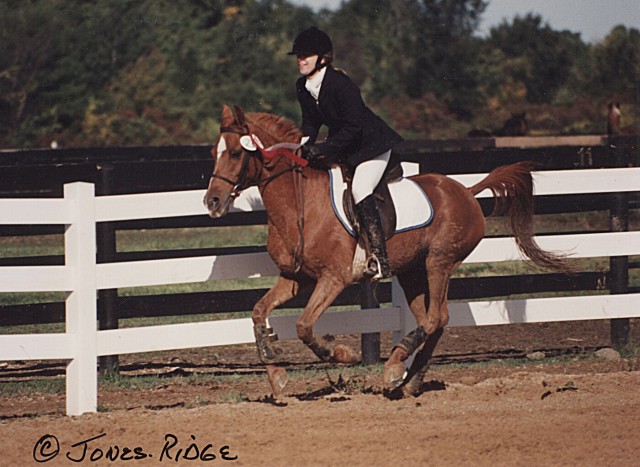 When the end came (the vet thought he probably had a tumor on his adrenal gland), it was mercifully quick. His body is now gone, but the lessons I learned from him will always be with me, and I hope they are values that I can pass down to my daughter. I will be forever grateful that I didn’t give up on the horse that couldn’t do it. 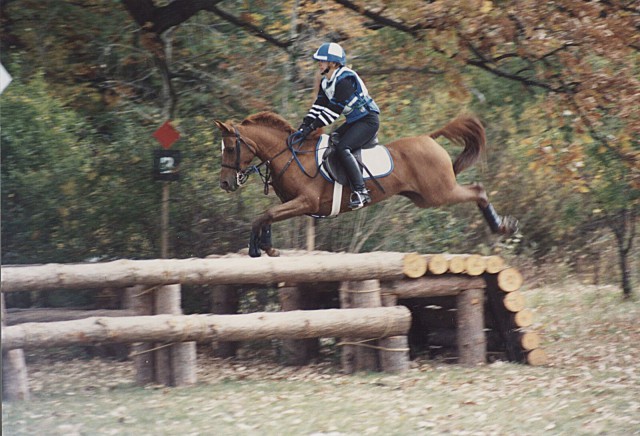 Evergreen Farm H.T. (October 1991): Giving a table plenty of room. What the photo doesn’t show is the one-stride to a vertical! Photo by Bernadette Hare Chvoy.

Thanks to Mary Jo for sharing the story of her extraordinary little horse. Does YOUR special horse deserve to have its story told? Email it to [email protected] for inclusion in a future edition of “Tribute to the No-Name.”