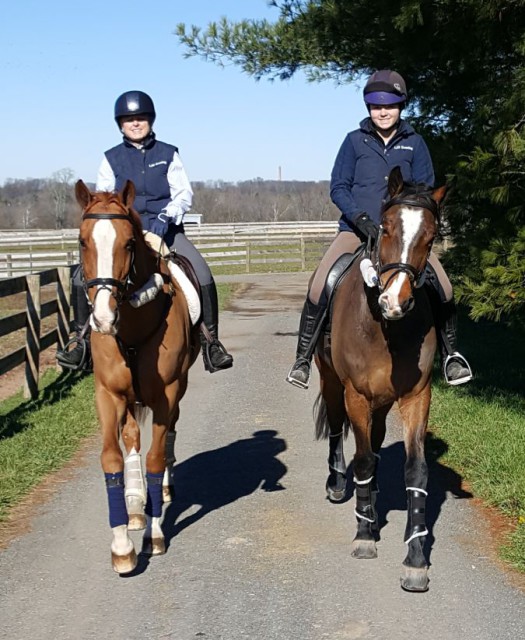 Sharon Decker on Share Option and Skyler Decker on Inoui Van Bost out for a post lesson hack. Photo by Dave Taylor.

Would you bid to win a lesson on a four-star horse? Sharon Decker knew she couldn’t pass up the opportunity last fall during a fundraising dinner to send Lillian Heard and her four-star partner Share Option to France for Les Etoiles de Pau CCI4*.

Many of Lillian’s sponsors donated exciting items to be auctioned off to help them make the trip, but the marquee item on the auction block was a lesson on Share Option, her 14-year-old Irish Sport Horse gelding, once they returned home from France.

When Sharon heard that this once-in-a-lifetime experience would be up for grabs, she wasn’t going to let anything get in her way. “I was bidding on it, and I was winning it,” Sharon said. “There was another supporter of Lillian’s there that was giving me a run for my money, so I bid as high as I could to make it happen.”

Sharon is the mother of Skyler Decker, who was a member of the Area II team that won a gold medal in the CH-J* at the 2015 North American Junior and Young Rider Championships. As Skyler’s biggest fan, Sharon is always supporting her daughter as a successful young event rider. But this time, it was Sharon’s turn to have the ride of her life. 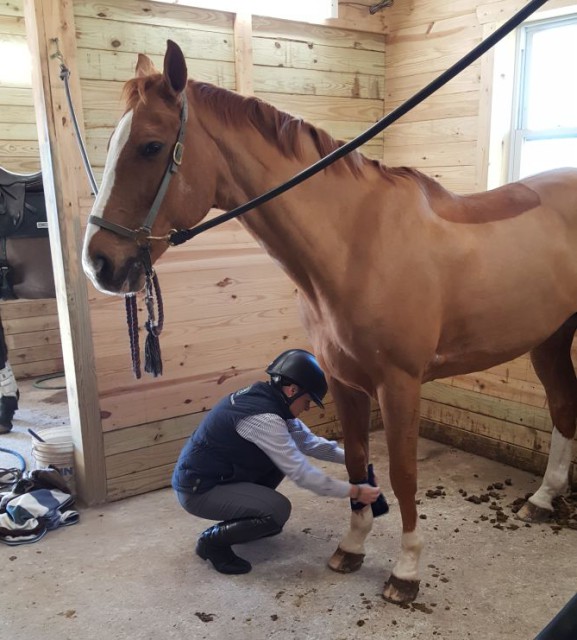 Sharon Getting Whitey Ready for His Lesson. Photo by Dave Taylor

Share Option, better known as “Whitey” successfully completed Rolex CCI4* for the past two years. Though Lillian ultimately retired him on course at Pau due to a minor breathing issue, Whitey was back to his old self after a month of rest.

He came back into work in early December, and Sharon started the new year off right last Sunday when she got her chance to spend some quality saddle time on a four-star horse at Bascule Farm in Poolesville, Maryland.

“It’s been about 10 years since I was last on a horse,” Sharon explains. “Back then I did a little walk, some trot, and I accidently cantered.”

The lesson began as any other would: grooming, tacking and getting squared away on the horse. As Sharon climbed onto Whitey, a smile appeared that you wouldn’t see leave her face for the rest of the day.

Lillian instructed Sharon and Whitey through the walk, and then the trot, and this time a canter that Sharon actually asked for. The lesson lasted just about 45 minutes as Lillian helped Sharon work through the years of rust, and by the end Sharon had a real grasp for the horse that Share Option truly is.

“I knew Whitey would be really good at a lesson like that because he is so laid back,” Lillian said. “Watching Sharon ride him like that brought me as much joy as it did her. I never get the chance to see my horse go, but to have him be so good and go so well for an adult amateur made me incredibly happy.”

After the lesson, Sharon got to do something that was priceless in her book. With Sharon still on Whitey and Skyler riding her own horse, Inoui Von Bost, they went for a mother-daughter hack around Bascule Farm on a gorgeous January day.

“This whole experience was amazing; the fact that I could ride a four-star horse was really cool,” Sharon said. “The fact that I got to be on a horse that has competed at some of the biggest events in the world combined with enjoying an afternoon hack with my daughter was something I will never forget.”