This is the second article in William Micklem's four-part "Dressage Gold" series. Click here to read the first installment, "Good Dressage Equals Medals and Money." Keep coming back this week for the next articles in his series, and be sure to check out the Micklem Bridle, which is part of William's personal drive for more humane training. 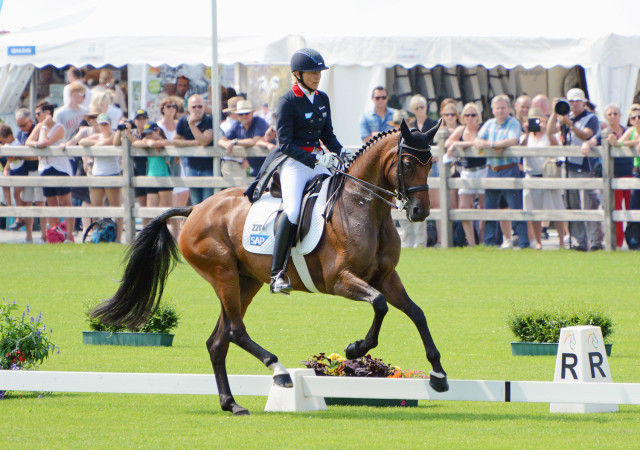 The German scales of training have become predominant in dressage training in every European country in recent years. There is not a coaching manual or book that does not mention them, but on examination there is sufficient confusion and misunderstanding to ask if they really are the best structure for us to use for dressage training.

The sheer number of contradictory books on the scales of training, the rejection of the scale by experts in biomechanics, and the major concerns of those two hugely well respected equestrian professors, Dr. Thomas Ritter and Dr. Andrew McLean, all suggest we should at least keep looking for improvements. In particular we need to find ways to make this type of information more accessible and memorable to those with an interest in dressage.

A Search for a Better Way

In the dressage world Herbert Rehbein was considered the professional’s professional — a humble genius. He won the Hamburg Dressage Derby eight times and seven titles in the German Professionals Championships. He was also voted Trainer of the Year by the International Trainers Club in 1991 and in 1994, and the German Federation conferred on him the title of Riding Master.

In the 1970s I was lucky enough to spend two short periods at his training stables, Gronwoldhof, when he explained to me that most people misunderstood and incorrectly translated the scales of training. This started a personal quest to study the subject and led to me producing a new structure 30 years ago that I call “the Constants and the Variables.” The bones of this structure are described in my book The Complete Horse Riding Manual published in 2003.

Rehbein pointed out a number of things to me, the first of which was that the scales are not classical principles in the real sense, because at that time they were barely 50 years old. He said they had only recently gained such credibility because coaches and riders everywhere were desperate to grab on to something that was simple and credible in a dressage world that at that time was being pulled apart by contradictions and conflicts between different dressage schools and traditions.

Since that time the poor horse has gone through centuries of abuse, much in the name of classical equitation, that has seen the use of the strongest bits, sharpest spurs and all manners of gadgets. So attaching the word “classical” is often more marketing than truth.

I was delighted to find that one of the retired equine residents at Gronwoldhof was Alwin Schockemöhle’s great show jumping World Champion Donald Rex. However I was even more delighted to watch an athletic 4-year-old working, who was the apple of Herbert’s eye — his name was Pik Bube.

It was no surprise that he went on to become world famous, both as a multiple Grand Prix winner and as a dressage stallion. His success further cemented the reputation of the Hannoverian stud book, despite the fact that he was half Thoroughbred, as was Reiner Klimke’s greatest dressage horse, the “Westphalian” Ahlerich.

Herbert Rehbein trained with Bubi Gunther, who together with Willie Schulteis and Joseph Neckermann were trained by the father of modern German dressage, Otto Lorke. They in turn trained Harry Boldt, Reiner Klimke and the majority of today’s top trainers including, Conrad Schumacher and Jean Bemelmans. What a dynasty! What they have collectively achieved means their words have huge significance.

Not Perfect by Any Means

What we must acknowledge is that the scales are not always perfect in concept or use and that students should be encouraged to keep an open mind and test things to see if they are good or if they can be improved. As Jean Bemelans said at the Global Dressage Forum in 2007:

“In Germany we have the classical training scale. … If you have a perfect horse with a perfect character with no problems, then you can stay on the classical scale of riding, and step by step you come to the Grand Prix. But there is no perfect horse! You can have a nervous horse, there are many problems, then you have to find out the right way to come to the end with that horse. We have our rules where we go step by step, but on the other side we cannot be like a policeman and say, ‘there is only one way!’”

Conrad Schumacher echoed this in September 2008: “As a trainer of trainers I want to help other trainers find the best way to help his or her students, and sometimes that means being less standard in their approach and more creative in their application of the scales of training and traditional training techniques to get the best result.” Now that’s an open door!

It is now commonly suggested that the order of the scales can be improved. From both a practical training and a biomechanical point of view there is a growing consensus that straightness should come before schwung and there are many who put losgelassenheit ahead of rhythm.

For example Reiner Klimke always put losgelassenheit first. Now his hugely successful daughter Ingrid, who was lucky enough to learn to ride on a Connemara pony, says the same. Her conveyor belt of top horses shows that the Klimke system works and it is of huge value to look at their personal three top training priorities.

Ingrid says, “My Father always strived for Olympic glory, but he was well aware that he would not reach this goal if he took shortcuts. He knew it was better to wait than rush a horse’s training. Our highest aim is to make our horses more beautiful and keep them healthy through their training. To achieve this the three daily priorities with all horses are 1) take small steps, 2) keep variety in the training and 3) foster the horse’s personality … which means we should never dominate our horses.

The first real difficulty in the scales of training is the translation of losgelassenheit. What does it mean? It is now usually translated as looseness or suppleness and at times relaxation, but in German looseness is “lockerheit,” suppleness is “geschmeidigkeit” and relaxation is “entspannung.” So why was the specific term losgelassenheit used?

It is a noun that has been created from the verb loslassen, meaning “to let go,” therefore losgelassen “to have let go” or “be comfortable mentally.” Heit is just an ending that changes verbs and adjectives into nouns. The key point is that it refers to a mental not physical state. This makes much more sense, as it is obviously vital to have acceptance and calmness as a basic prerequisite for good physical performance.

Rehbein confirmed this by saying that suppleness is what you develop in a horse over a long period of time using the progression of exercises as you work towards impulsion. As you will see the latter part of this sentence about impulsion is of huge importance in defining schwung.

Schwung Is Not Impulsion

The majority in the English speaking world describe this as “impulsion,” but I believe this is wrong.  It means “spring” and it is close in meaning to that now less used word “cadence,” which is about a bigger period of suspension and a shorter stance time for each step. This is confirmed by the fact that it clearly states in the German manual that you cannot have schwung in walk, because there is no period of suspension. Yet we can obviously have impulsion in the walk.

I believe that where the German manual talks of “developing propulsive force” is what we mean by impulsion, and that impulsion comes as a result of putting in place all the elements of the scales of training. This gets to the heart of the problem of incorrectly describing the scales as a pyramid rather than a scale. A scale is like the notes on a piano that are all used together for top results.

The development of controlled propulsive force, or controlled impulsion, is in practice the main aim of the scales as a whole. And they are scales, to go up and down continuously. Hence the name scales, not pyramid! A pyramid makes a very pretty illustration but it is fundamentally wrong to look at the scales in this way. This is certainly different from many people’s understanding of the scales but it makes obvious logical sense and can be seen in the original German manual.

Thankfully we have moved on from the early aims of so-called “classical” dressage, which did have collection as the ultimate and single aim. This resulted in disastrous and often cruel consequences for horses. No, surely our ultimate aim is to have a happy athlete doing a whole range of exercises within a range of both collected and extended paces and varied activities, all of which fundamentally require impulsion.

I am only too aware that this subject stirs the passions, however it is important not to get too emotional. None benefit if there is a breakdown of constructive discussion and research or we lose our sense of humour. A very bright local Pony Club rider, having heard me talking about the scales of training, emphasised this when looking at the flaking skin of a dressage coach that had seen too much sun and too little moisturiser.  “Look,” she said, “the scales of training!”