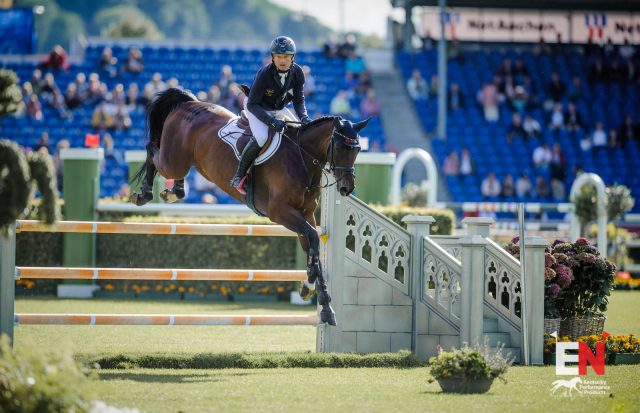 Michael Jung and fischerChipmunk retain their Aachen lead in the second phase. Photo by Tilly Berendt.

Boy, does Aachen move fast: we were scarcely free of the Deutsche Bank stadium, the site’s secondary devoted to dressage, before the eventing competition moved over to the capacious main stadium with its 40,000 seats and wide swathes of grass footing. There’s nowhere quite like this in equestrian sport, and it’s even more unique in eventing – though Kentucky’s main arena offers an impressive stadium setting, this feels like striding into something more akin to Wembley. That can be a bit of an eye-opener for horses, who often go rather starstruck in their rounds, and it also lures riders into using a bit too much of the available space. As a result, poles fall liberally — and the time penalties rack up pretty prolifically, too. 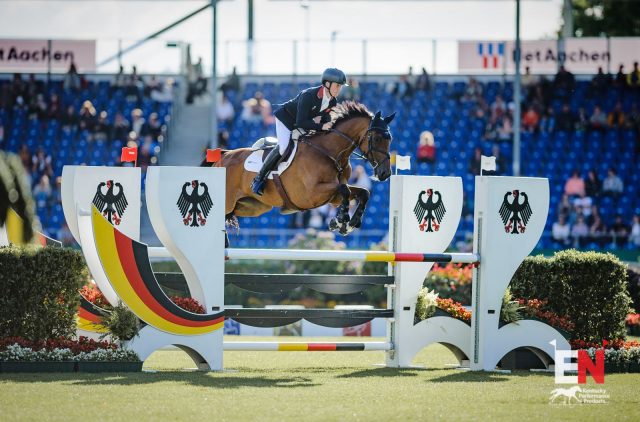 Tom McEwen and Toledo de Kerser continue their Badminton redemption arc, moving up a placing after delivering a clear round. Photo by Tilly Berendt.

We saw no small amount of action in the ring this evening, with just nine of the 42 combinations delivering fault-free rounds. Notable among those four-faulters were previously second-placed Will Coleman and the ten-year-old Chin Tonic HS, who tickled and toppled the airy upright at seven to drop to sixth place going into cross-country; Ros Canter and her World Champion Allstar B, who had an early rail to drop from fourth to eleventh; Germany’s Boekelo winners Sophie Leube and Jadore Moi, who tipped the second element of the double to slip from seventh to twelfth; and Will Coleman again, this time with last year’s winner Off the Record, who had the same rail as Sophie to move from ninth to thirteenth. France’s Stephane Landoise, tenth after the first phase with Chaman Dumontceau, also slid from the top ten, moving down to fourteenth after knocking an early pole as the last to go. 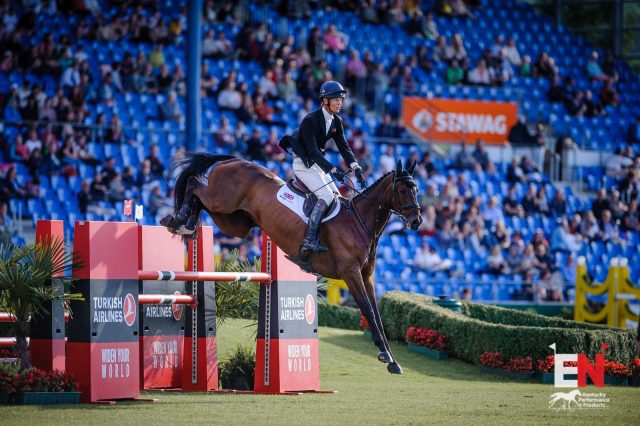 William Fox-Pitt’s Little Fire delivers the goods as his breeder watches on. Photo by Tilly Berendt.

That opened the door for those nine clears to act as the catalysts for fortuitous leaderboard climbs. Tom McEwen and Toledo de Kerser, arguably the most reliable show jumpers in the field, delivered the goods to step up from third to second, while William Fox-Pitt and Little Fire, whose breeder is here spectating this weekend, did the same to climb from sixth to third overnight. 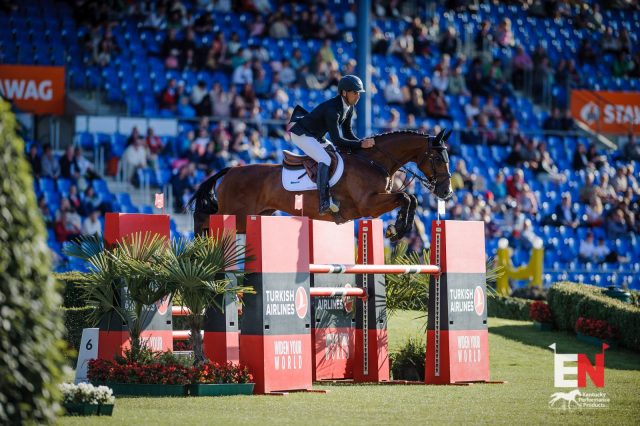 Many of the clears came at the tail end of the class as the anchor riders of each team delivered their best efforts. Among those was Tim Price, who orchestrated a one-place climb to fourth after a characteristically stylish round with his 2021 Pau winner Falco – though he’ll be ruing the 0.4 time penalties he picked up, which prevented him from going ahead of William Fox-Pitt. 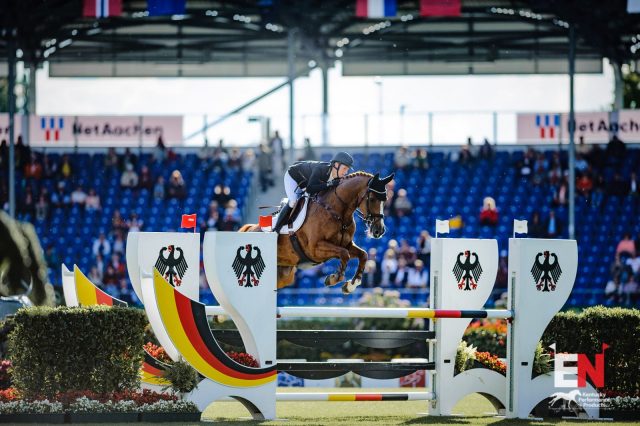 Sandra Auffarth and Viamant du Matz make their move up the leaderboard with a super clear. Photo by Tilly Berendt.

Sandra Auffarth, third to go for the German team, moved up from eighth to fifth with her Tokyo mount Viamant du Matz, which put them ahead of previously second-placed Will Coleman and Chin Tonic HS in sixth. 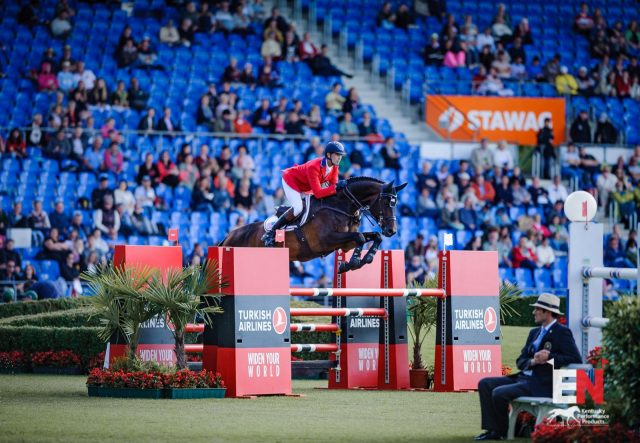 Will Coleman and Chin Tonic HS. Photo by Tilly Berendt. 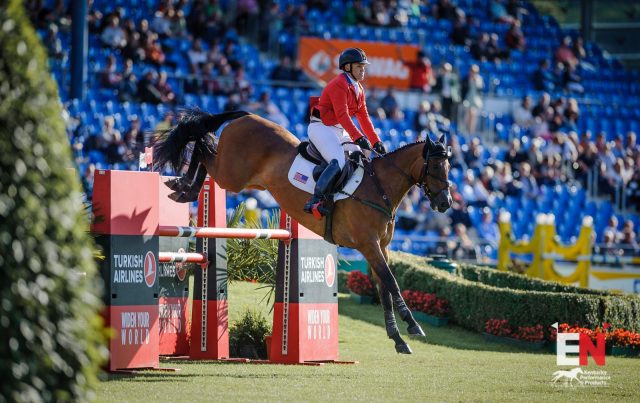 Buck Davidson and Carlevo halve their placing with one of the nine double-clears of the day. Photo by Tilly Berendt.

There was plenty to celebrate in camp USA, though: they also hold seventh place after a sparkling clear from Buck Davidson and Carlevo propelled them up from 15th – and the team itself moved up from fourth to third place in the standings. 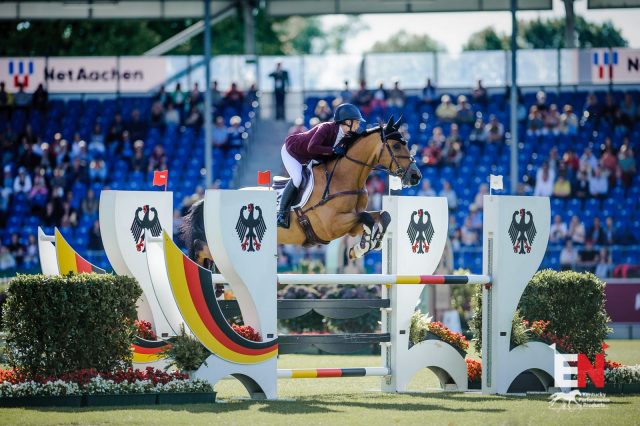 British partnership Yasmin Ingham and Rehy DJ — or Piglet, to his friends — moved up to eighth place from sixteenth after an attacking, confident clear, and Australia’s Andrew Hoy and Vassily de Lassos, with whom they were equally placed after the first phase, delivered the first faultless round of the day to move up to ninth overnight. The top ten is rounded out by Ireland’s Joseph Murphy, who survived a sticky jump mid-course with Calmaro to move up from 21st. 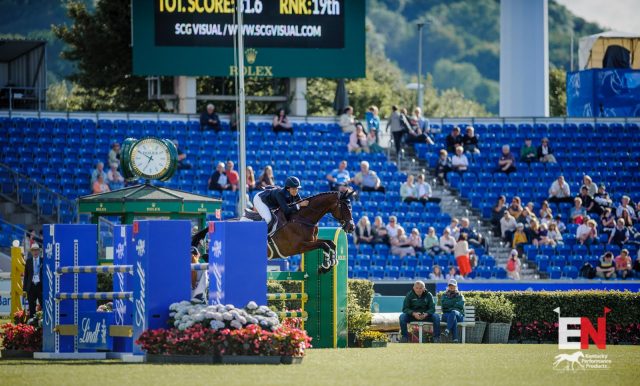 Meghan O’Donoghue and Palm Crescent get the job done under pressure. Photo by Tilly Berendt.

We also saw a super clear with 1.2 time from the USA’s Meghan O’Donoghue, who jumped from 26th to fifteenth place with her ex-racehorse Palm Crescent, while fellow US teammate Sydney Elliott had an unlucky pair of rails, plus 1.2 time penalties, to slip from 28th to 34th place. 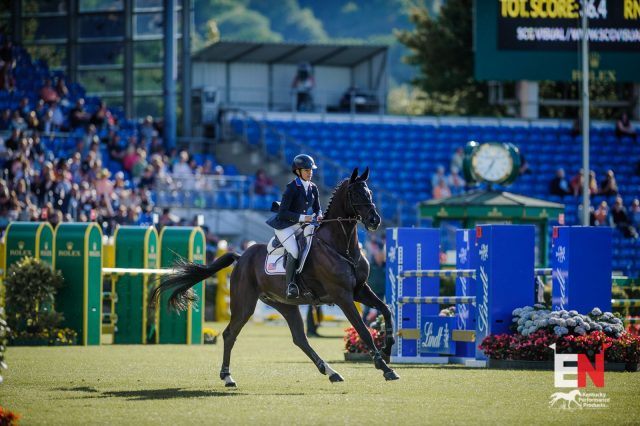 The margins are looking tight as a tick as we head into tomorrow morning’s cross-country finale — well, expect at the top of the leaderboard, of course. Michael Jung boasts a 4.2 penalty lead over Tom McEwen, which translates as 11 seconds in hand, and though Aachen’s time is notoriously hard to catch, it’s hard to imagine the super-fast pair needing that much of a buffer. Tom’s margin ahead of William is slimmer: he’s 0.8, or two seconds, ahead, and from then on out, much of our line-up stands within seconds of one another. We’ll be taking a closer look at the challenge to come soon — in the meantime, Go Eventing!

The team standings after two phases at Aachen.

The top ten after an influential showjumping phase at Aachen.