Across the Pond is our new weekly update series on what our North American riders based in Europe are up to. Have a tip on an American or Canadian competing in Europe? Send it to [email protected]. We’re also always on the lookout for photos and videos. Go USA and Canada! 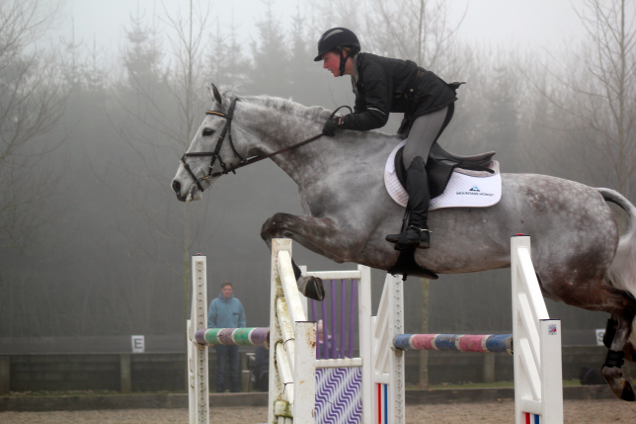 Tiana and Finn at the UK Training Sessions earlier this month. Photo by Samantha Clark for PRO.

Tiana Coudray: Tiana’s fans will be thrilled to learn we might see her on home soil this year for Kentucky, as she hasn’t yet decided whether Ringwood Magister will run there or at Badminton. Seeing pictures of him from Samantha Clark’s UK training session reports on the PRO blog is almost shocking, as he’s starting to lose much of that dark steel grey color in his coat. Of course, he’s still stunning to look at! Finn had his first run of the season earlier this month at Isleham in Intermediate, where he jumped clear and had an easy trip across the country. He did the Advanced/Intermediate division this past weekend at Great Witchingham, placing ninth with a dressage score of 25.7 and adding just time penalties in both jumping phases.

As we’ve seen on the PRO blog, Tiana has an exciting new horse she’s campaigning this year in Sambuca F, another stunning grey new to her yard as of just a couple weeks ago. Tiana had the 8-year-old mare out for the first time this season at Great Witchingham this past weekend, where she ran HC at Novice. Tiana told Samantha: “She’s struggled a bit last year in the dressage. She’s a beautiful mover and she’s done some very good tests as a six year old, but last year as a seven year old the wheels were coming off the cart a little bit. I’ve just let her have it really easy so far, no pressure, I’m just trying to make friends with her before I start to ask much of her because I know she has a history.” 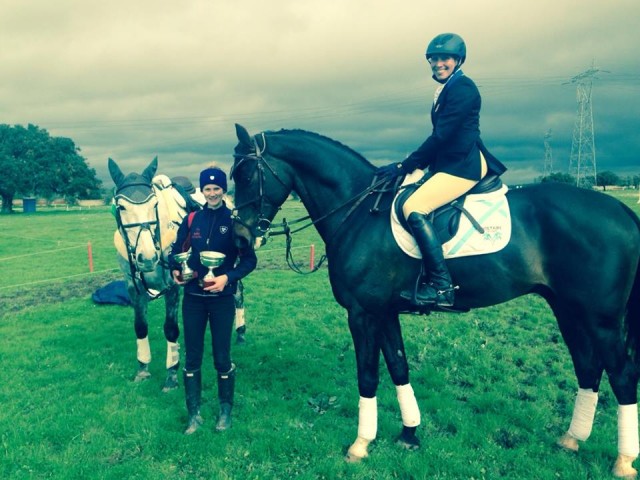 Liz Halliday-Sharp: Liz has been having a bang-up season so far with her upper-level mounts Fernhill By Night and HHS Cooley. She abandoned the soggy weather in England early in the year and headed to Portugal with both horses, where Fernhill By Night (Blackie) won the CIC2* at Vale Soboroso CIC2* — winning a Harley Davidson motorcycle in the process — before winning again the following week in the CIC2* at Barroca, where Cooley also finished third. Not a bad way to start the season, right?

Sadly, she had to return to chilly England soon after, but for a good reason — to ride with David O’Connor in the UK training sessions, as both Blackie and Cooley were listed following strong performances in the second half of 2013. We reported over the weekend that Liz was the sole American competing in the Nations Cup at Fontainebleau CICO3* this past weekend. Both horses had very competitive dressage tests before picking up unfortunate stops on cross country.

Liz posted the following update on Facebook: “We had an educational week in Fontainebleau with a mixture of results, but all in all I am pleased with my horses! In the CICO3*, HHS Cooley and Fernhill By Night did good dressage tests for 47, then sadly both horses had a run out at different places on the seriously strong xc track. Cooley had miscommunication in new bit early on, and Blackie just jumped too big into last water, and we made the turn too tight to next element. They both jumped really well today around a huge SJ course‚ Cooley one rail and Blackie clear. Disappointing result after xc, but still pleased with my horses around a really difficult track early season!” 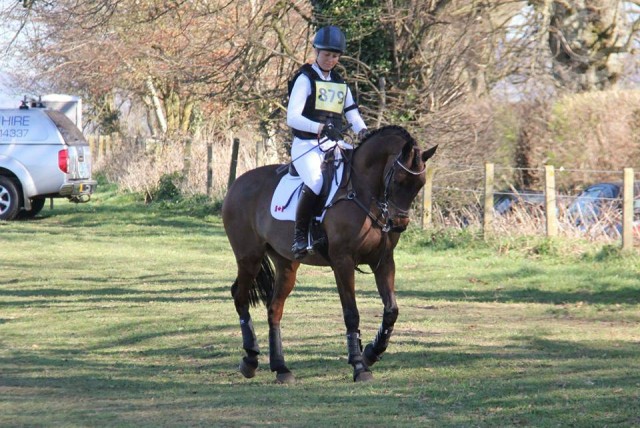 Rebecca Howard: Rebecca Howard and Riddle Master are coming off a fantastic season in 2013, in which they were named Canadian Rider and Horse of the Year, as well as landed a spot on British Eventing’s top 20 pairs list. Rupert hadn’t been out since his 12th place finish at Burghley last fall until this month, when he romped around the Open Intermediate at Aldon for his first event back. I love the photo above from Uptown Eventing — doesn’t he look so excited to be out again?

Rebecca took Rupert to Gatcombe this past weekend, where they just did the Intermediate combined test. They had a good dressage test and a rail down, but Samantha reported over on the PRO blog that the going was very tacky. “The horse has got super quality work,” Rebecca told Samantha. “He has the ability to go in and be up there with the best in the world, but he struggles with nerves in the arena and anticipation, and then he overreacts to my aids. He’s a bit of a mission for me.” Rupert heads to Belton CIC3* next as a prep run for Badminton. 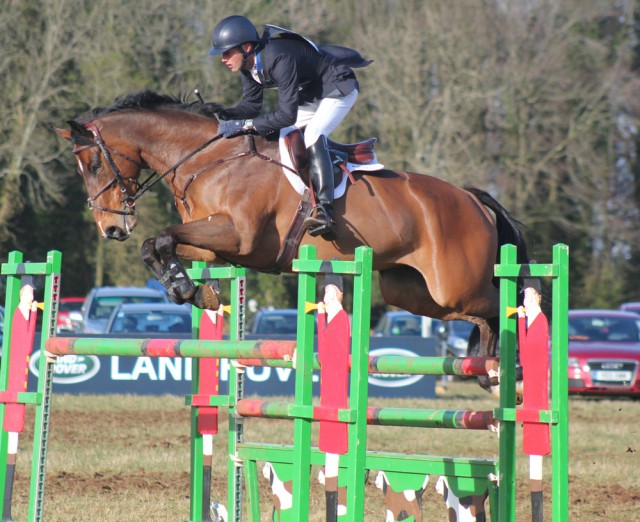 Clark and Glen at Gatcombe this past weekend. Photo by Samantha Clark for PRO.

Clark Montgomery: Clark and Jess have been settled into the UK for over a year, with Loughan Glen and Universe boasting numerous impressive finishes in big classes this past season. Both horses are preparing for Badminton, and Samantha has done a wonderful job keeping us apprised of their prep over on the PRO blog. Glen and Universe were both out at Gatcombe this past weekend, where they ran the Advanced/Intermediate division. Glen scored 29.6 on the flat, with Buzz scoring 31, and they each pulled a rail in show jumping before having clear trips across the country at an easy pace.

Clark told Samantha: “The cross country felt fine actually, even being here over a year I still come here and look at all this mud and think, ‘Holy crap! I don’t want to run in it!’ but then you start going and the horses get on with it just fine. Glenn felt really good, super. He didn’t have a great run at Isleham so I was a bit worried about that but he’s been schooling a few more times and he came out like himself today, I was really pleased.” 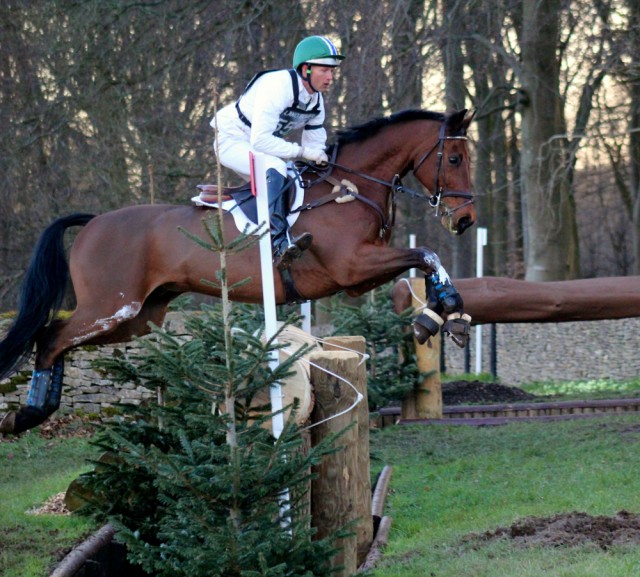 Clark and Buzz at Gatcombe. Photo by Samantha Clark for PRO.

And about Buzz: “He was just a little monster on cross country, he loves it! He’s definitely feeling really good, if anything a little overly confident, we just need to keep him under control, but he did relax as he went around, I think he just needed to blow some energy off so I think it was really good that he got to have the run. He loves it, it’s awesome, he’s really blossomed over here and it’s just fantastic to feel.”

Samantha reports that both Glen and Buzz will head to Belton CIC3* next, where they’ll see Mark Phillip’s course, which Clark expects to be “big and galloping but technical at the same time with a few combinations.” Click over to the PRO blog to see Samantha’s Gatcombe dressage report here and show jumping and cross country reports here. Many thanks to Samantha for the video of Glen’s dressage test, as well as the lovely photos. 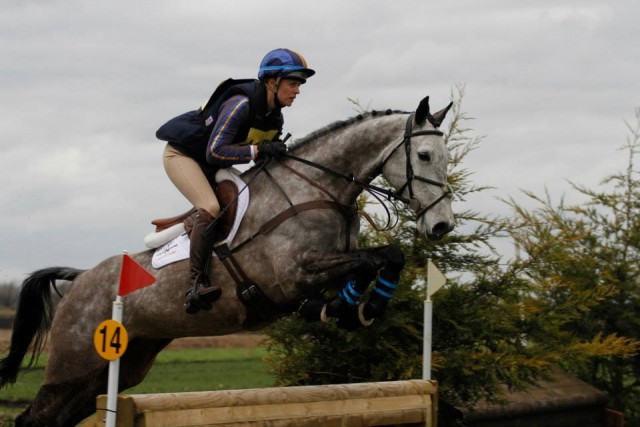 Jules and Chwupdiwup. Photo used with permission from Lulu Kyriacou.

Jules Stiller: Jules is another rider with some really fantastic horses she’s acquired recently that will be exciting to watch this year. Sintra BK came to Jules last summer from Andrew Nicholson, who took the now 9-year-old mare to a 14th place finish at Saumur CCI3* just before she got the ride. Jules and Sintra BK completed both Hartpury CIC3* and Blenheim Palace CCI3* last season, and Jules had her out in the Intermediate at Oabsy earlier this month as their first run of 2014.

Pandora X is another of Jules’ exciting upper-level mares who came to her following the 2012 season from Giovanni Ugolotti, who campaigned the horse from the one-star level. Jules capped the 2013 season by moving the mare up to her first CIC3* at Barbury, where they finished 24th. They retired at Blenheim in their first crack at a CCI3*, and Jules hasn’t yet had her out this season, so it will be exciting to see how she looks coming off her break.

In addition to her two upper-level mares, Jules also has a number of lovely young up-and-coming horses, including Chwupdiwup, a 7-year-old mare who did her first CCI* last fall at Ballindenisk, where she placed third. Jules had her out for the first time this season in Novice at Isleham, where they were eighth, and the mare was 10th a week later at Oabsy, also in Novice. Do we have any other mare fans out there? I’ve only ever owned mares, so I love that Jules is all about girl power too.

Other riders: I’ll also be following along with Americans Brianne Staley, Logan Rawlings, Jacob Fletcher, Mary-Francis Cargile, Katherine Coleman and Cindy Rawson, as well Canadians Shandiss and Jordan McDonald, Kathryn Robinson and Mike Winter in these regular updates, so stay tuned for much more on our North American riders based in Europe. Go USA!