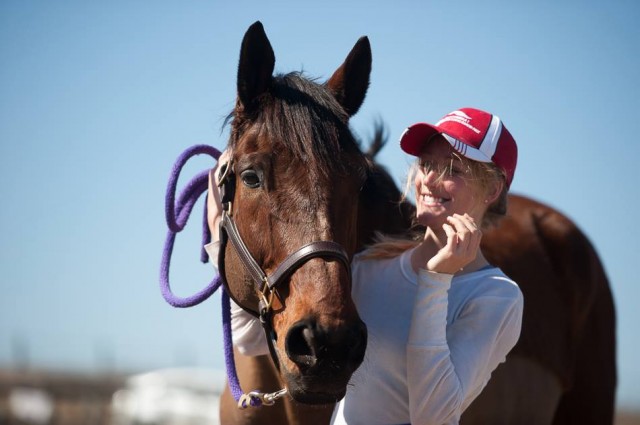 Kelsey and The Gentleman Pirate after their cross country run at Paradise Farm. Photo by Jamey Price.

Kelsey Briggs and her OTTB, The Gentleman Pirate, have become one of our more popular stories of late. After Kelsey wrote in and told us the tearjerker story of her beloved Pirate’s recovery from what was sure to be a career ending, if not life threatening, injury, we couldn’t help but keep tabs on this pair as they go on a whirlwind comeback tour this spring.

I was able to catch up with Kelsey at Carolina International this past weekend, where she and Pirate were competing in the Preliminary division. Kelsey said that Pirate has been training well and is super fit to the point where he barely has to catch his breath after coming off of cross country. “He doesn’t feel like he spent the last year off with a broken neck at all,” Kelsey said. “He feels like he hasn’t missed a beat.”

Kelsey went on to have a stellar weekend at Carolina International, scoring a respectable 38 in the dressage in a large and competitive field. They added one unlucky rail in a difficult show jumping arena and went on to finish cross country clean with just a handful of time. Kelsey was thrilled with Pirate’s run this weekend and feels confident in her decision to move back up to Intermediate at The Fork next month.

Kelsey has her eyes set on doing a CIC2* by the end of the year and, if all goes according to plan, will consider moving up to Advanced sometime next year. “I want to make sure that we are really good at Intermediate before we move up to Advanced,” Kelsey said, having never run Advanced herself yet.

She plans to partake in some more training to further both her and Pirate’s education to ensure that they are as well prepared for the move as they can be. In the meantime, Kelsey is eternally grateful for the second chance she has been given to ride her horse of a lifetime again, and is simply enjoying the ride that she and Pirate are privileged enough to go on.

To keep up with Kelsey and Pirate, visit their Facebook page.

Here is Kelsey’s helmet cam from the Preliminary cross country at Carolina International this past weekend: