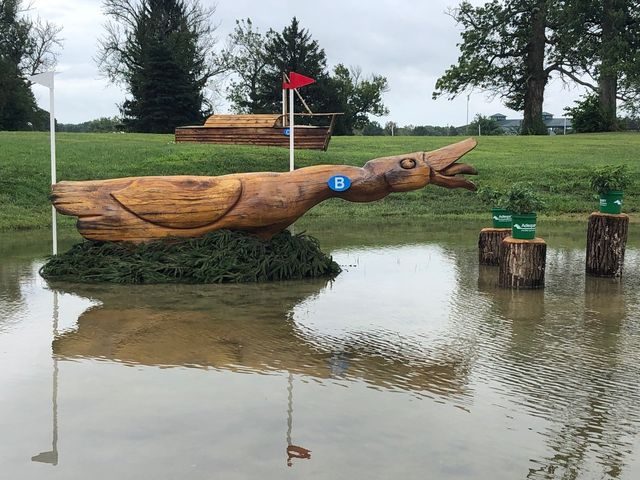 The Kentucky Horse Park cross country course is the original frontier for carved wooden waterfowl, and the flock has grown beyond contented-looking ducks over the years. This goose looks none too happy about being an obstacle on the AEC Advanced cross country course. This is #7ABC, the Adequan Water Park. Photo via CrossCountryApp.

Competitors are facing off against the blue numbers bright and early Friday morning, with the first horse contesting $60,000 Adequan USEA Advanced Final sprinting from the start box at 8:46 a.m.

You can follow along via the live stream here. Take a virtual tour of the course via CrossCountry App here, follow along with live scoring here. Advanced ride times are here.

10:13 a.m. ET: And that’s a wrap for the Advanced division! Boyd and Long Island T hold their lead heading into the show jumping finale tomorrow evening. 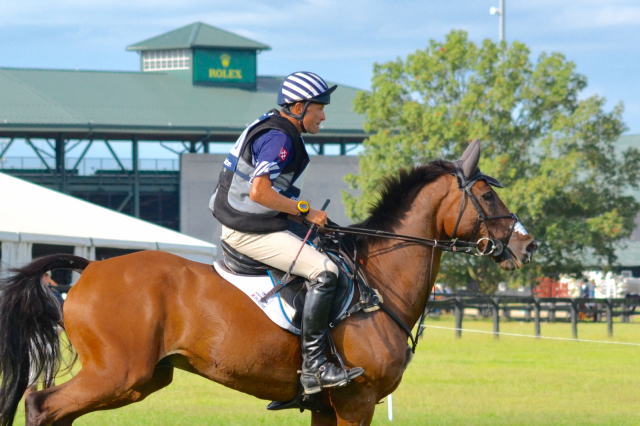 UPDATE: Remarks from Boyd, who described his round as “fantastic.”

“I was actually very nervous going into it, he said. “I hadn’t jumped a really big track on him since earlier this year and it was a pretty intimidating track, but typical Kentucky you just get out there and it rides magic. Ludwig was brave and just jumping out of stride. I was trying to give him a good ride to every fence and he just really gave me a good ride today.

“I didn’t go for broke, but I also need to start practicing trying to jump the fences out of stride. A course like this that is so open and galloping if you got a good eye and you are a little bit brave you can catch a lot of those galloping jumps without touching their mouth. I worked hard at that and he’s a pretty experienced horse now so I made a couple of tight turns and jumped some fences on the angle and thinking of that big check tomorrow I kept running to the end.”

Shout-out to Fylicia Barr and Daniela Moguel, who had my favorite rides of the day but who I didn’t get to mention on here! Here is your top 10 heading into tomorrow’s show jumping. Not one pair made the time; Boyd and Leslie clocked in with the quickest turn of hoof. 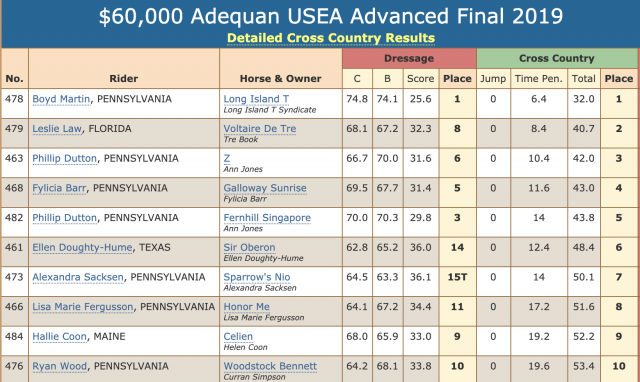 10:08 a.m. ET: Matt Flynn and Wizzerd climb a bit to get over the corner out of the coffin and take the pins with them, but a reminder there will be no penalties for this.

10:07 a.m. ET: Our last pair of the division, Sara Gumbiner and Polaris are on their way!

10:05 a.m. ET: Provisionally, Boyd will now go back into the overnight lead after Phillip came home with 14 time to drop a few spots down on Fernhill Singapore. 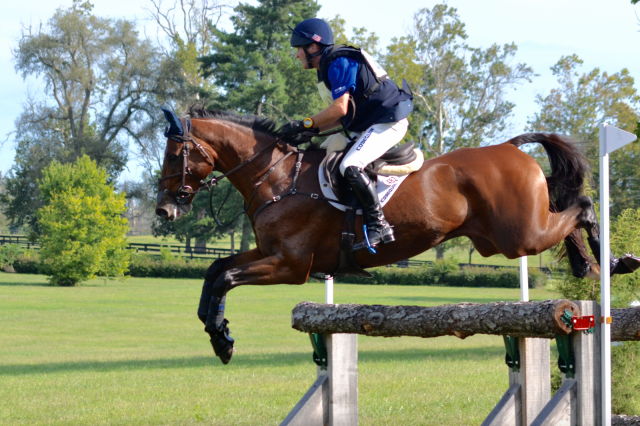 10:04 a.m. ET: Hallie Coon and Celien are now on course and looking sharp.

10:03 a.m. ET: Matt Flynn uses all of his tallness to direct Wizzerd on where to go on a sharp right turn coming out of the Frog Pond. Well done!

10:02 a.m. ET: Leslie Law and Voltaire de Tre also bring home one of the faster rides of the day with 8.4 time faults.

10:01 a.m. ET: And another runout, this time at the corner at the coffin for Waylon and Lancaster.

10:00 a.m. ET: A late left hand runout at the coffin corner for Ryan and Flintstar. Now on course are Phillip Dutton and Fernhill Singapore, who now have a leading score to defend after Boyd came home with time.

UPDATE: Phillip’s comments on the course: “He was great. Obviously I wanted it to be a good round since Aachen didn’t go to plan but I didn’t think he really had a bad fence. It was a good round. I tried to go quick, I probably misjudged how fast you had to go because I probably could have gone a little faster on him. I thought [it would be difficult to make the time] walking it but I didn’t think it would be quite as difficult as it was. It’s a long year and I’m not too worried. I was very pleased with him.”

9:58 a.m. ET: Waylon Roberts and Lancaster unfortunately lose their hopes of hanging on to second place after grinding to a halt at the corner out of the Frog Pond. Bummer. Clear on their second attempt.

9:56 a.m. ET: Scores are reporting 6.4 time for Boyd and Long Island T, which would put them on a two phase score of 32.0. This may yet be adjusted since there was a hold, I’ll update if so.

9:58 a.m. ET: Waylon Roberts and Lancaster unfortunately lose their hopes of hanging on to second place after grinding to a halt at the corner out of the Frog Pond. Bummer. Clear on their second attempt.

9:56 a.m. ET: Scores are reporting 6.4 time for Boyd and Long Island T, which would put them on a two phase score of 32.0. This may yet be adjusted since there was a hold, I’ll update if so.

9:56 a.m. ET: Ryan Keefe scraps her way through the Frog Pond question at 10AB with Flintstar and gets the job done on the way out.

9:55 a.m. ET: Many thanks to Rob Burk, who’s been chatting away on the live stream all weekend and is accompanied by Cathy Wieschhoff today.

9:54 a.m. ET: Just a hang of the back leg at the Sunken Road for Voltaire de Tre and Leslie Law. Leslie looks back to check the pin but all good. Also an update on Jules Ennis Batters that she’s doing fine, just a little sore. Heal fast, Jules!

UPDATE: Remarks from Leslie on his ride: “He was amazing. He’s really turned into this cross-country machine. I haven’t run him since he was here for the Land Rover Kentucky Three-Day Event in April so I was a little nervous. I think I get more nervous now than I ever used to, but he was a real machine out there. A lot of it went to plan. I would have liked for the second water to not be so dramatic, but apart from that it was very good.”

9:47 a.m. ET: Screens had been put up around Arden for privacy purposes and are being taken down now, so we should be getting back underway shortly.

9:41 a.m. ET: An update on Arden: she’s conscious and talking but will be transported for further examination. I believe Il Vici is ok, but will confirm. We’re still on hold.

9:38 a.m. ET: We’re still on a hold here in the Advanced division. We’ll bring you an update as soon as we can get one.

9:34 a.m. ET: Not sure, but looks like we may have another hold on course. It looked like Boyd was being pulled up. Leslie Law — shown below, striding into the deep end a bit but ultimately getting the job done — lives dangerously early out on course and he is also now being held. 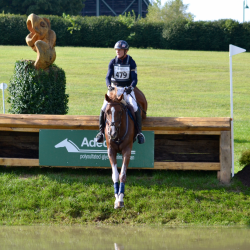 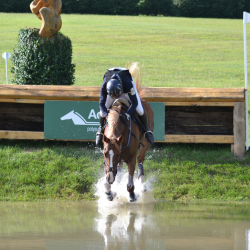 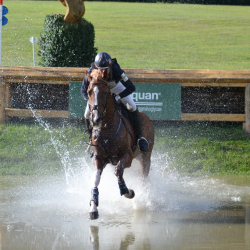 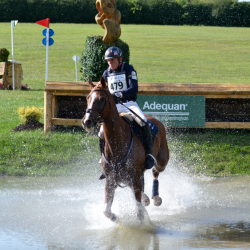 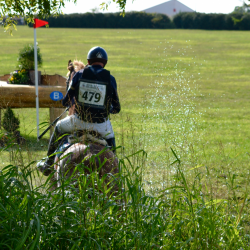 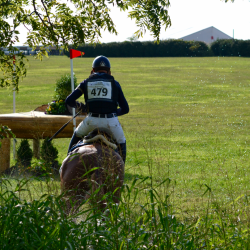 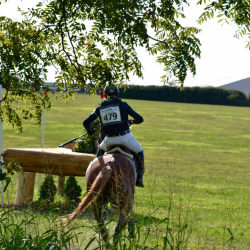 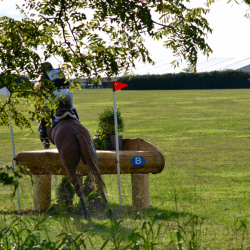 9:31 a.m. ET: Overnight leaders Boyd Martin and Long Island T are on course! What do we think, pedal to the metal to bring home our first clear inside the time? 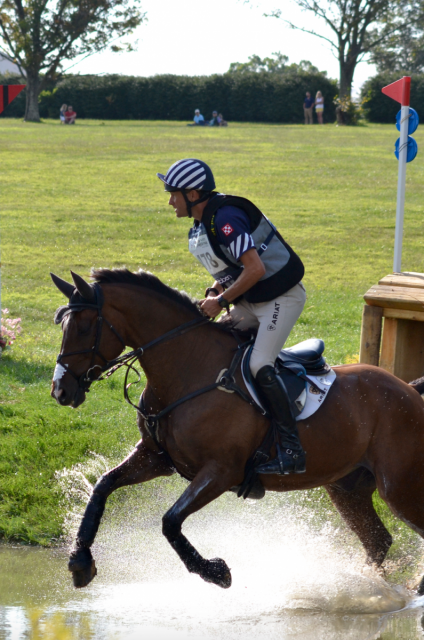 9:30 a.m. ET: Arden Wildasin, who had a great day in the Preliminary division yesterday, takes the long route at the sunken road with Il Vici. 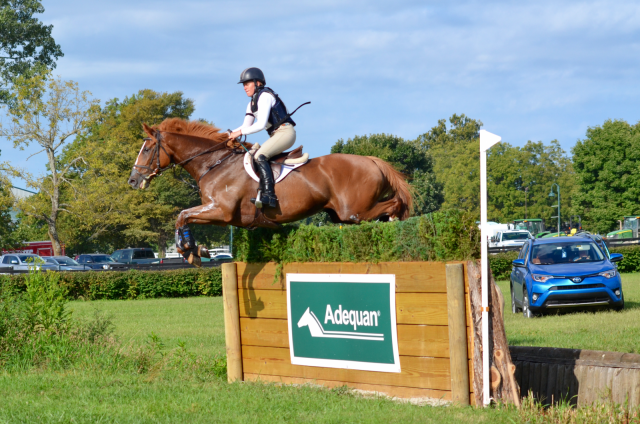 9:25 a.m. ET: Clark Montgomery and Caribbean Soul drop the frangible pin going into the sunken road, and he put his hand up shortly after. Bummer. 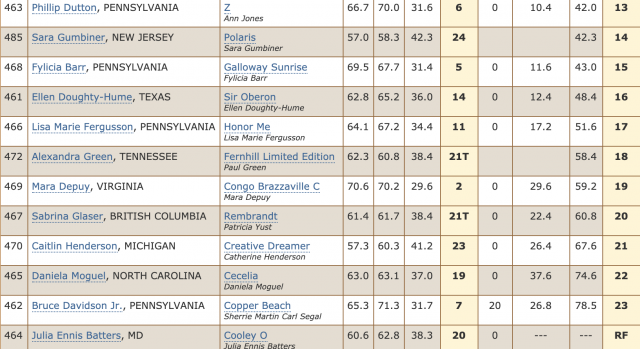 9:19 a.m. ET: Alex Green picks up a fly by at the corner coming out of the sunken road, but she’s clear on her second attempt.

9:13 a.m. ET: Good morning, EN! We’re up and running with live updates comin’ at ya from the Advanced cross country first thing this morning. If you missed the first handful of riders, let’s catch up:

The optimum time of 6:22 is proving tricky for the first few riders. We’ll see who picks up a double clear first, stay tuned!