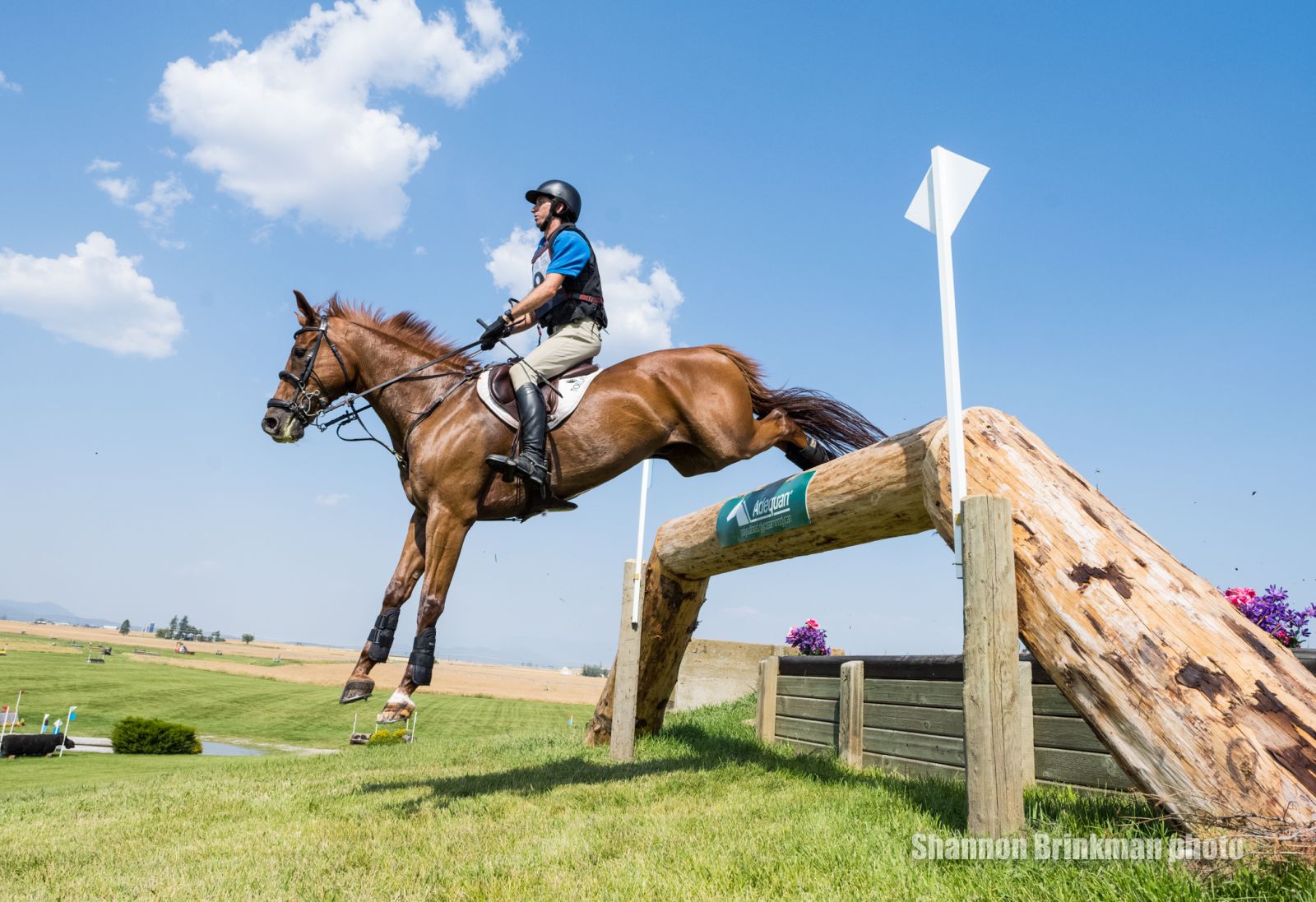 Time to check in on our USEA American Eventing Championship competitors! Many thanks to the hardworking team at the USEA for the awesome press releases, which are used in part below.

Today, the upper levels (Modified through Advanced) tackled Ian Stark’s cross country track, which certainly stood up to the task of presenting a championship-caliber challenge. More than a few pairs were caught out throughout the day, primarily stemming from a need to embrace the Ian Stark way and keep kicking. These riders will all take home some valuable information, clear round or not, from their experiences today.

Dressage begins tomorrow for the Beginner Novice divisions, while the upper levels conclude with show jumping and the Novice through Training riders go cross country. You can view the full schedule here. Tomorrow’s live stream will primarily feature show jumping, but one main camera will be positioned for some cross country viewing too. Check out the full schedule and the stream here.

The following press release excerpts were written by Meagan DeLisle for the USEA: 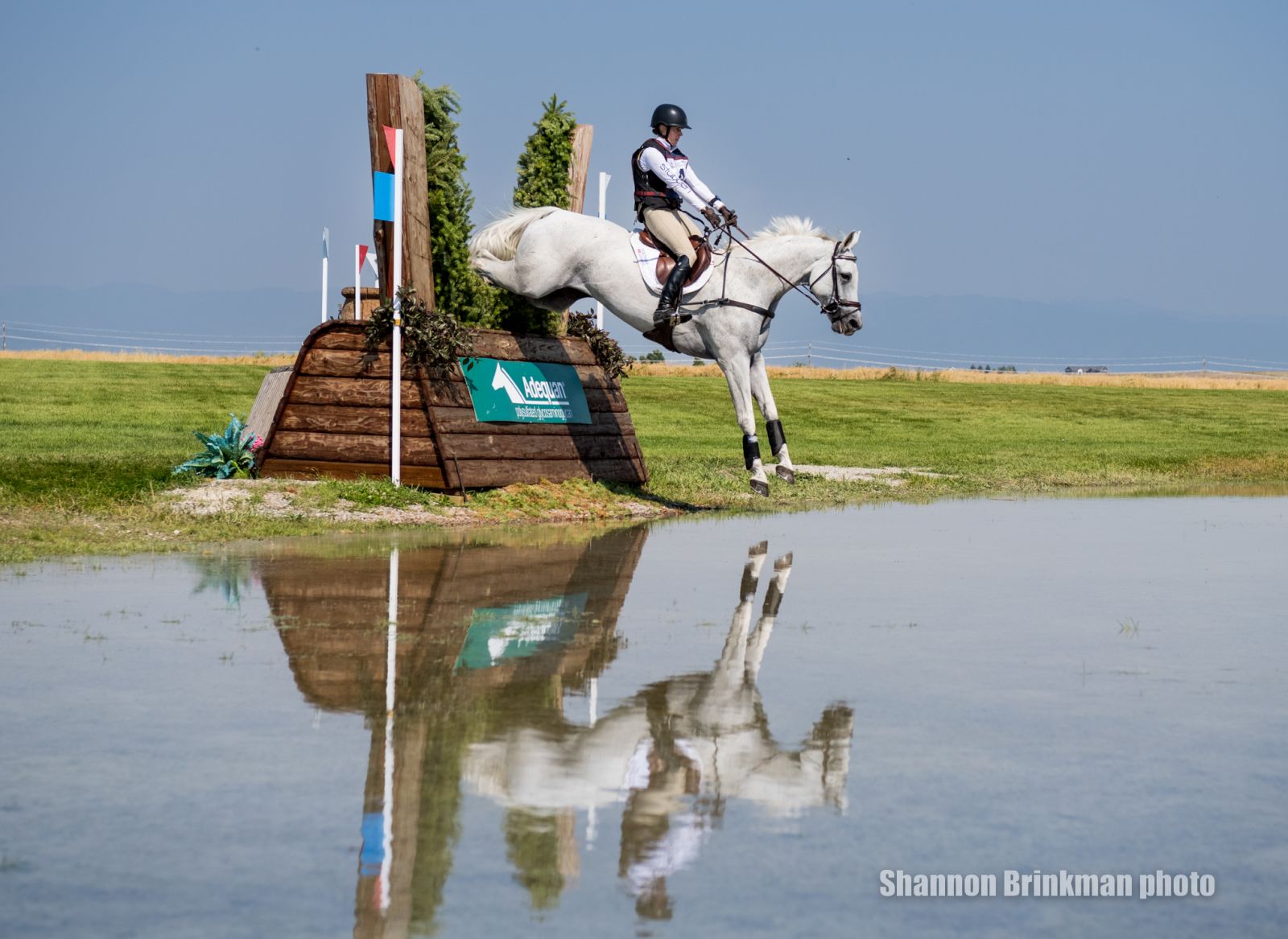 It is the battle of the Allistons in the $60,000 Adequan® USEA Advanced Final during the 2022 USEA American Eventing Championships (AEC) presented by Nutrena Feeds. The husband and wife duo currently sit hold all three of the podium spots following cross-country day with James in the lead aboard the 13-year-old Hanoverian gelding Paper Jam (Paparazzo x Reely Jammin XX) on a score of 32.1. Helen, who was the overnight leader following dressage, has moved down to the second place position with the 13-year-old Oldenburg gelding Ebay (Escudo x Contessa), and James also has a claim on the third place spot with the horse the Alliston’s have brought along since he was a yearling: the 8-year-old Canadian Warmblood gelding Nemesis (by Novalis).

“The horses were really good,” James commented. “The time was really tight so I think it was a benefit having multiple horses because I realized to get near the time you really had to be on it from the start really. Even then, I didn’t make it, but it was definitely tight.” Riding Paper Jam, James added just 1.2-time penalties to their dressage score and incurred 5.2-time penalties with Nemesis.

Comparing this year’s AEC track to the four-star held at Rebecca Farm in July, James reflected: “I think in July I was going slower in the longs because you have more time. But with all of this money on the line, you are pretty motivated to be as competitive as you possibly can. I think just adding the speed makes everything harder. The horses have to make split-second decisions and things don’t always come up perfect when you are going that sort of speed.”

Helen added 7.2-time penalties to their score after crossing the finish flags of Ian Stark’s Advanced course. “That was awesome,” said Helen. “I had a lot of fun. I went as fast as I possibly could, but it wasn’t quite fast enough, unfortunately. The horse was awesome and I don’t think I would change the way I rode anything. He jumped beautifully and felt like a pro. I was thrilled.” 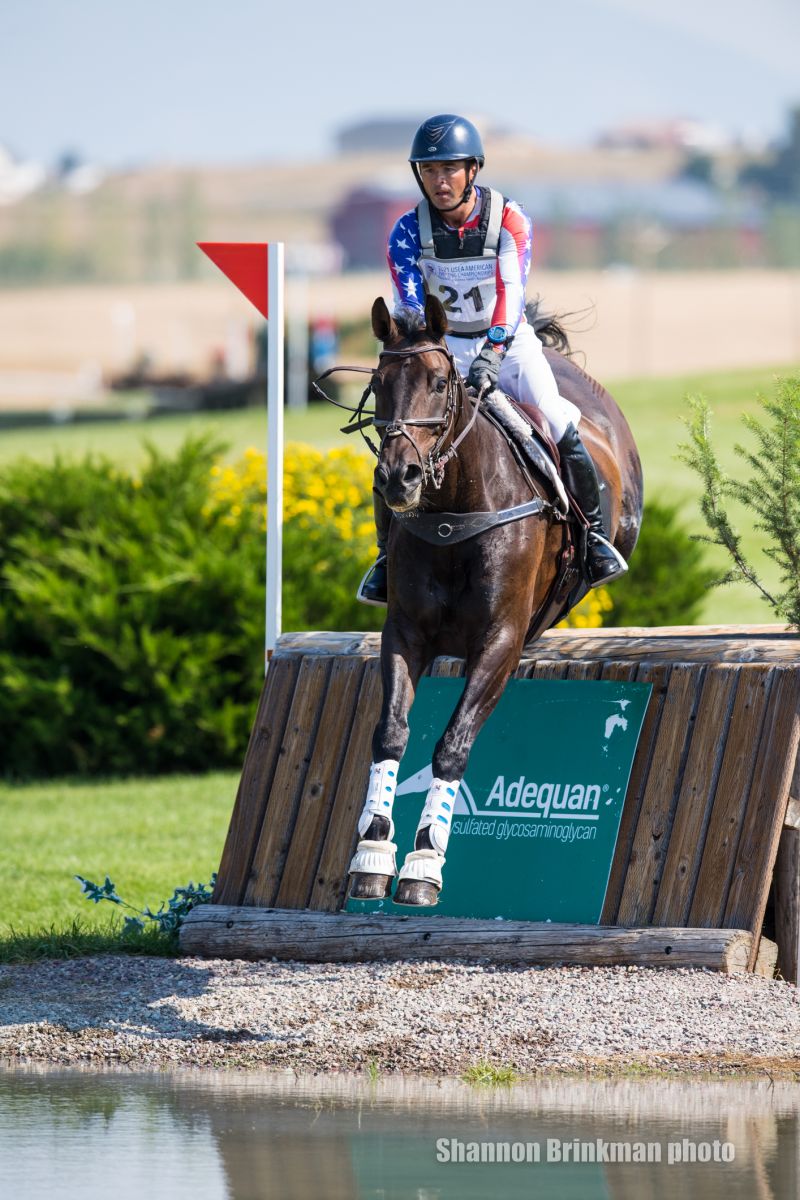 Travis Atkinson and Don Darco are in control of the Intermediate Championship. hoto by Shannon Brinkman Photography.

Time was definitely a factor in the USEA Intermediate Championship at the 2022 USEA American Eventing Championships (AEC) presented by Nutrena Feeds as horse and rider pairs contested Ian Stark’s cross-country track on Thursday. Of the 11 pairs to compete, only one went double-clear. Adding just 2.8-time penalties to their dressage score to take the lead going into the final phase was Travis Atkinson of Lehi, Utah, and his own 13-year-old Zweibrucker gelding Don Darco (Damarco x Gong Lee).

Dressed in red, white, and blue, Atkinson piloted “Darco” skilfully around Stark’s track despite an early miscommunication with a crossing guard, which he attributes to part of the reason why he found himself incurring the handful of time penalties. Overall, however, Atkinson was very pleased with the horse’s performance.

“He is my first horse to move up through the levels,” he shared. “We have been learning the ropes together. I got him as kind of a troubled horse, he is a little bit spooky and can be a little funny here or there. But on cross-country, he really seems to want to do the job. He is fun out there and is a game horse– even when he worries he is looking for a way to get the job done. He was great today, as good as I could have expected him to be. At the end of the day, it didn’t really matter, it moved us where we needed to be in order to be in contention for the win tomorrow.”

Darco and Atkinson have competed on the grounds at Rebecca Farm once before in 2021 where they competed in the Preliminary division. Going into show jumping, the pair were in the lead, but two rails cost them the win. “We were both a little less educated back then, so we are hoping we finish a little stronger tomorrow than what we did back then,” Atkinson reflected.

Looking to improve on last year’s performance, Atkinson sought the help of John Michael Durr in relation to their show jumping efforts. “In the past, our show jumping phase hasn’t been our strongest,” he said. “For me, I want to go and jump clear tomorrow obviously, but at the end of the day, my outlook with this horse is a lot bigger so I want to go in and have a good show jump round. If that is a clear round, then that is what I am going for. If it doesn’t, we just go to the next show and keep chipping away at it like we always do.”

Madison Langerak and Kelly Langerak’s 10-year-old Hungarian Sporthorse Normandy Kivalo (Kalaska De Semilly x Carina) clenched tight to their overnight lead in the USEA Modified Championships during the 2022 American Eventing Championships (AEC) presented by Nutrena Feeds with a double-clear cross-country performance on Thursday afternoon. The partnership goes into the final phase of the Championship with a nearly 7-point lead above the current second-place pair with their impressive dressage score of 20.6.

“He came out of the box and at fence number three, he spooked so hard and I lost my stirrup and I thought he was going to run out,” Langerak shared after her ride. “After that, I sat down and buckled in, and rode harder than I thought I was going to have to and got the job done. Normally he’s pretty slow so I was happy to look at my watch and be up on the time by the end of it.”

While Normandy Kivalo has had what Langerak refers to as a “picture-perfect upbringing in eventing,” it hasn’t come without its challenges. The horse has overcome two colic surgeries and overcome a torn tendon in his career so far. “We were actually headed to Montana a week after he had his first colic surgery where we were supposed to be for our first two-star. And then his first colic surgery happened and then the next year he tore a tendon, then he had another colic surgery and he’s just kind of a disaster—a walking disaster—but every year somehow he makes it out again.” As a testament to that, the pair competed in last year’s AEC held at the Kentucky Horse Park in Lexington, Kentucky, where they finished in ninth place in the Bates USEA Preliminary Amateur Championship.

“Honestly he’s had such a successful career at Preliminary that he very much could have been doing that but I took him Modified this spring at Spokane and he got a 17 in dressage and he killed cross-country. He won that but he came home a little weird so I kind of just decided to take it easy on him all summer. I just rode him at home and set my sights on this show because obviously, this would mean the most to me. So I really did not do anything this year. I had no plan and I have no plan after this but I just know the horse so well at this point and I know how consistent and reliable he is in the dressage phase in particular that it made it really easy to come out here and perform.” 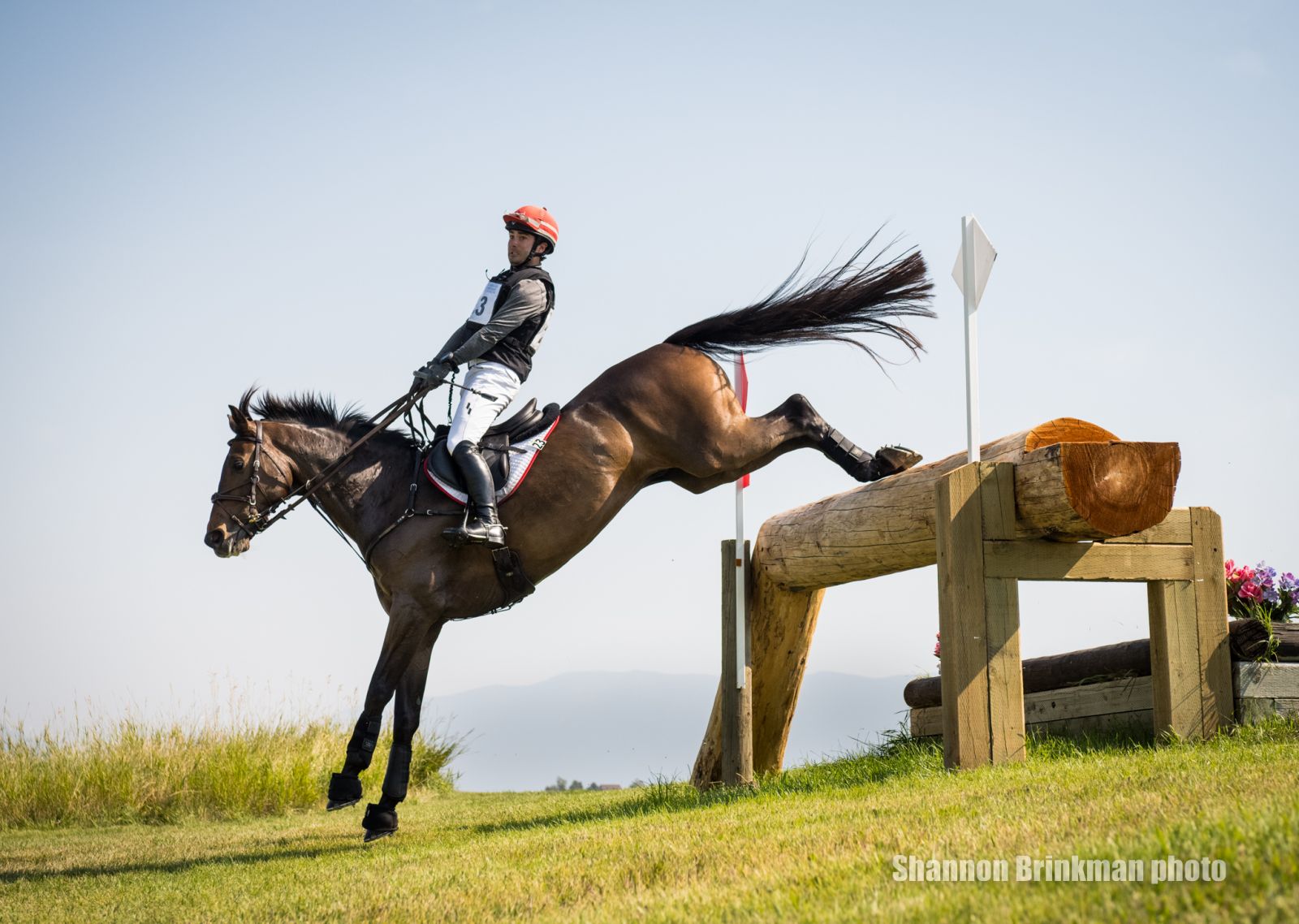 Tommy Greengard and Joshuay MBF are within striking distance of the leader in the Intermediate Championship. hoto by Shannon Brinkman Photography. 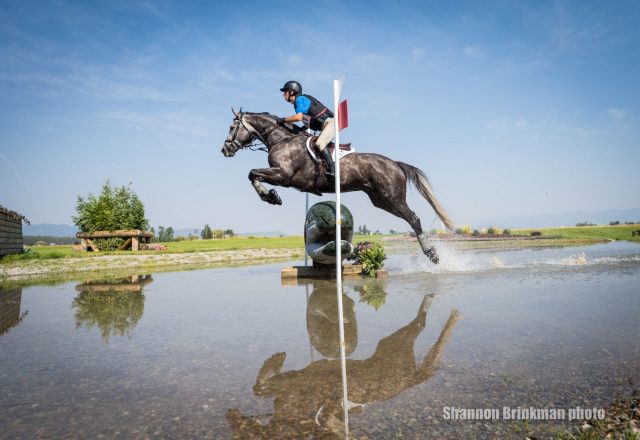 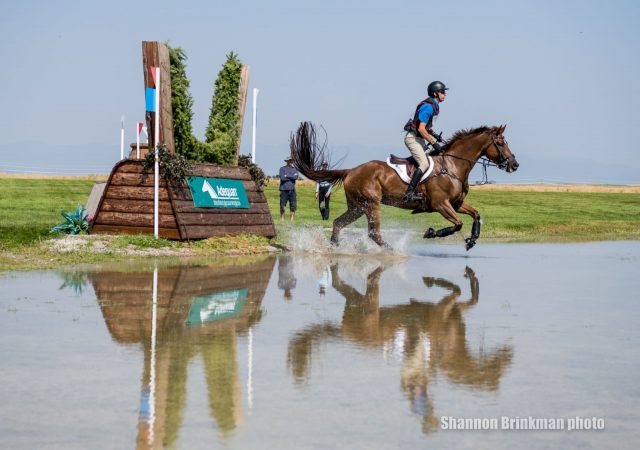 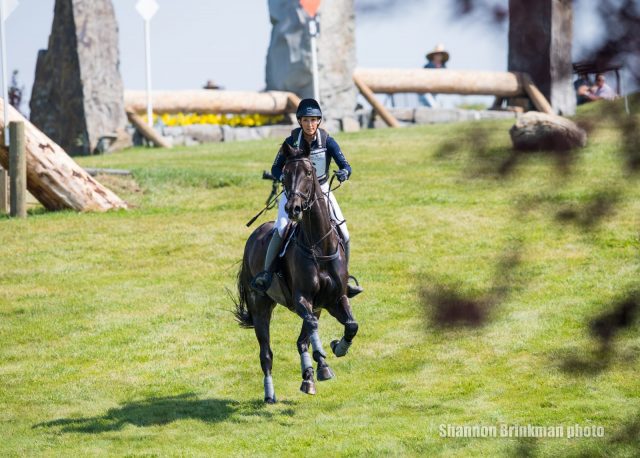 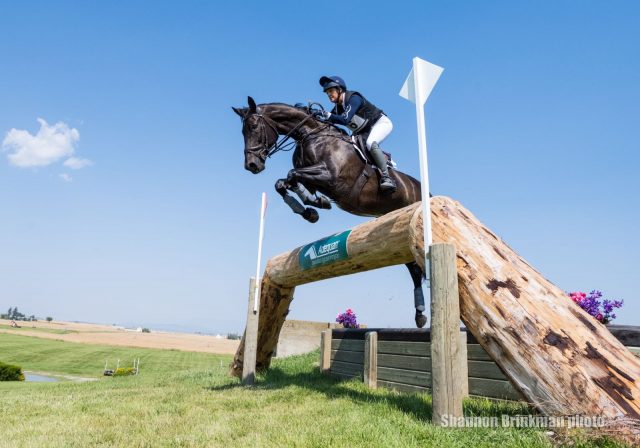 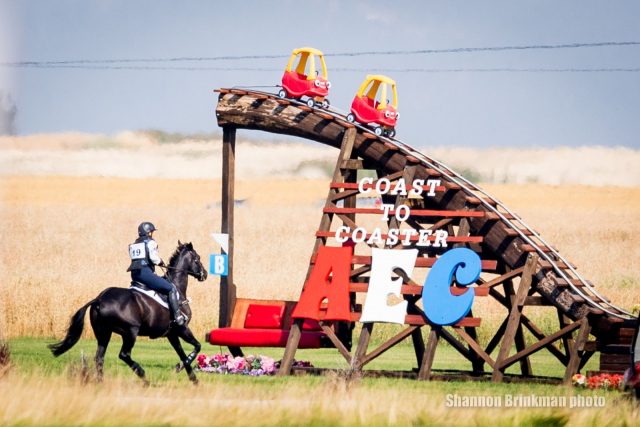 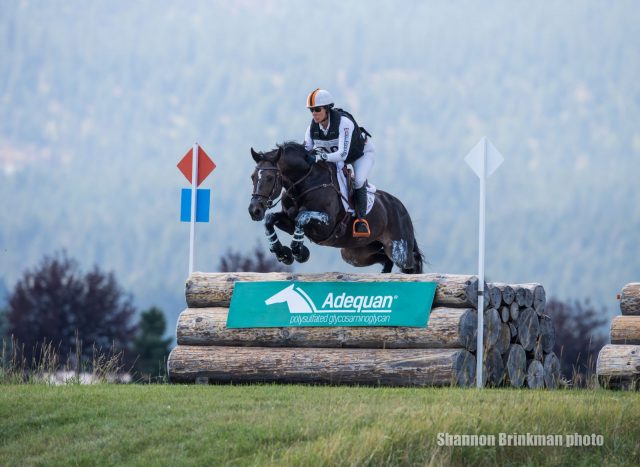 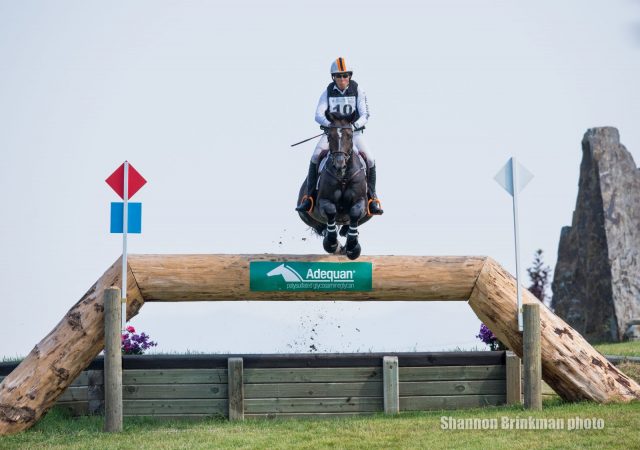 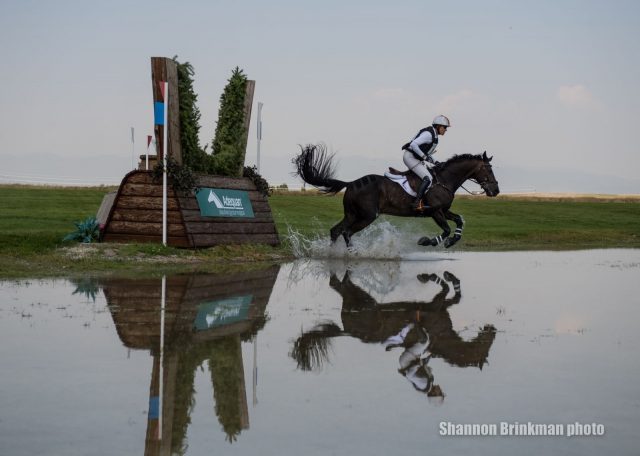 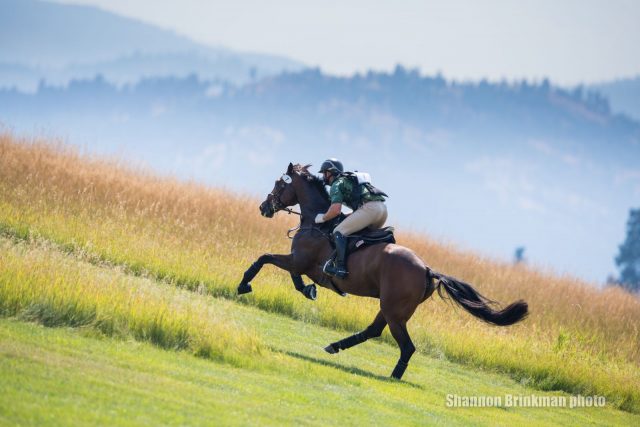 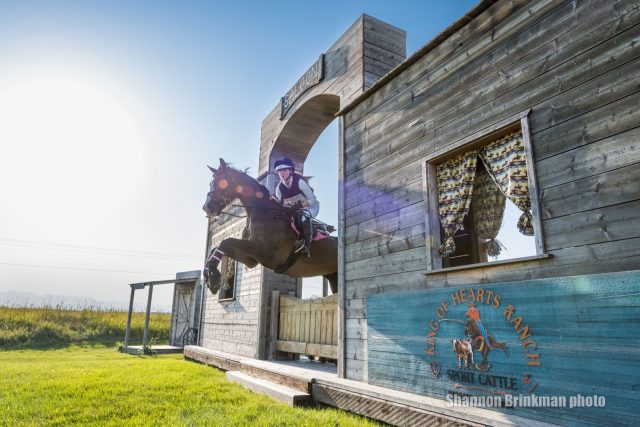 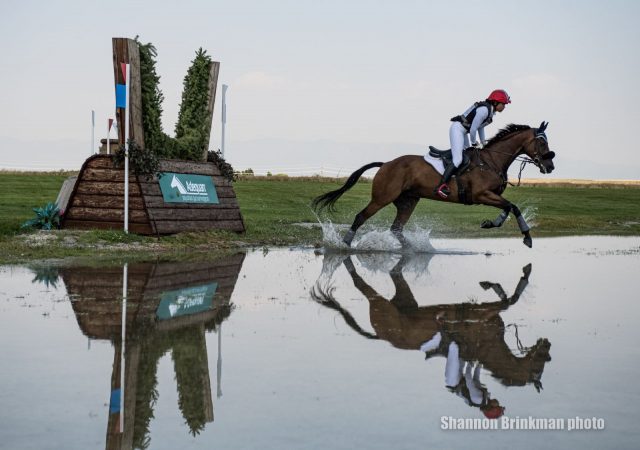 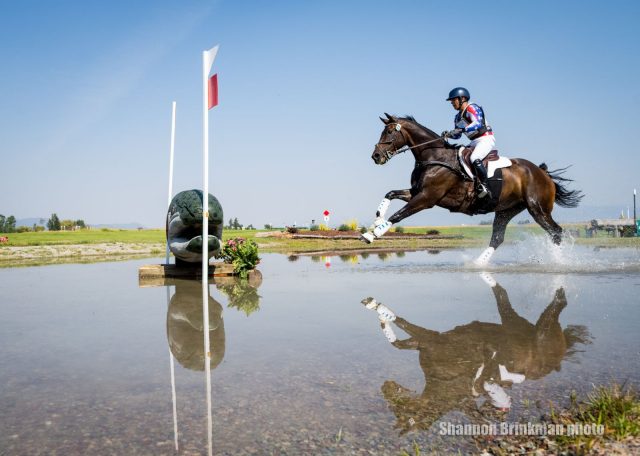