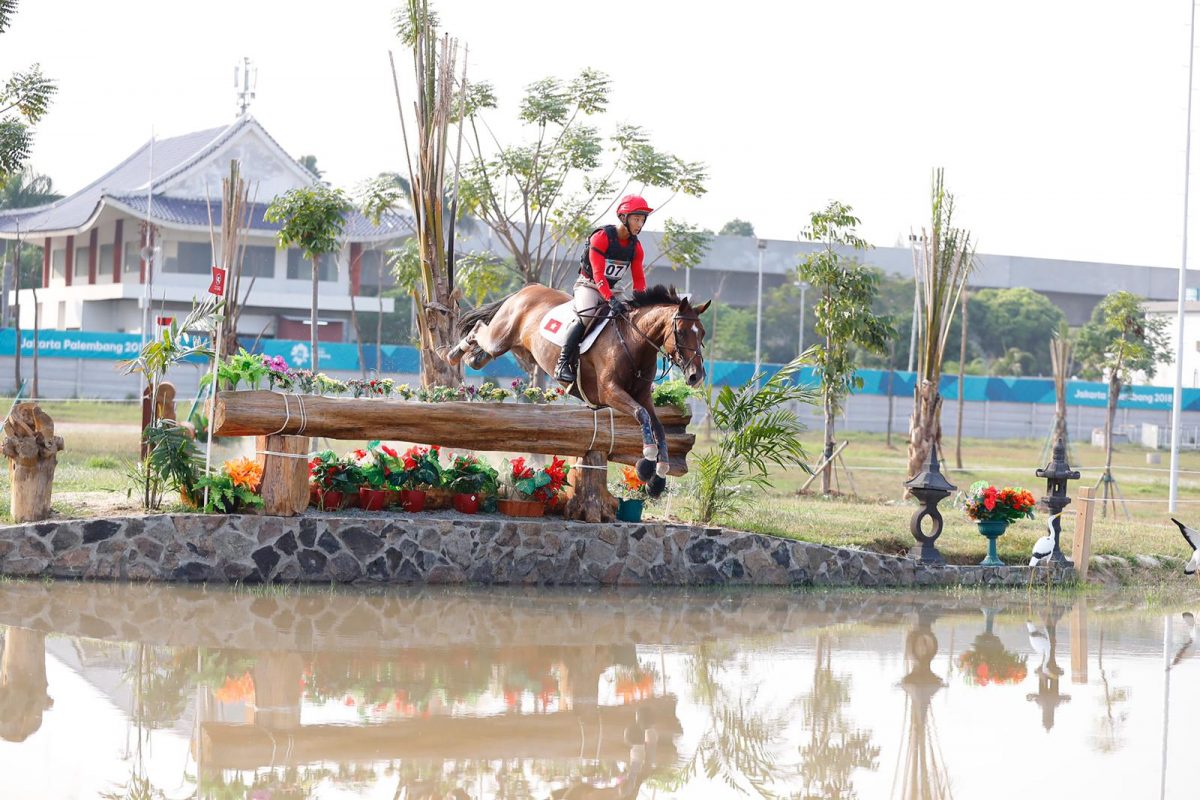 Tucked away on the easternmost side of busy, bustling Hong Kong, looking out over Clearwater Bay, is the Clearwater Bay Equestrian Centre, a haven for horse lovers that serves as a springboard – the site where many come to catch “the bug”. With nearly 8 million residents in a 426 square mile territory, there isn’t much space for equestrian sport – but it exists in these small, well-maintained incubators, within a network of Public Riding Schools, and on the two horse racing tracks heavily patronized by eager fans and bettors.

Yuxuan Su was six years old when he discovered horses and began riding at the the bayside riding center. Fascinated by the athletic partnership between horse and rider, something about the horses kept him enamored. Horses in Hong Kong require wealth and land, something his family was unable to spring for, so he spent much of his time at the Equestrian Centre, working off lessons and spending as many minutes as he could around the horses.

It was from here that the rest of his life would spring, a lifelong pursuit of excellence and education rooted not only in horses but in a desire to see and know the world. And it all began inside the little slice of riding heaven that existed solely to do what it had done for Yuxuan: open the doors to the incredible world of horses for more new riders who otherwise wouldn’t have the exposure.

It was the Summer Olympic Games of 2008, during which the equestrian events were hosted in Hong Kong with the support of The Hong Kong Jockey Club (HKJC), that spurred the rise in popularity of equestrian sports that continues today.

Long recognized among the largest community benefactors in Hong Kong, HKJC recognized the potential that lay in producing top equestrian athletes to represent the country in future championships. Investing in this talent development as well as the ongoing improvement of the community, HKJC bolstered its equestrian support. The establishment of the HKJC Equestrian Team and Junior Equestrian Training Squad expanded a program that already opened the door to horses for many through its network of British Horse Society-accredited Public Riding Schools. Each year, these Public Riding Schools (three of these are open to the public and one is designated for HKJC members only) attract over 80,000 visitors of all ages. 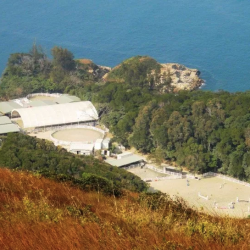 These developmental efforts supported by HKJC are intriguing. One unique aspect of the program here is the support riders receive at all stages of their involvement. The Jockey Club provides financial support, physiotherapy, coaching, and even horses for those who do not have their own – a commonality in a small country where importing a horse is often the easiest way to find one. With these barriers to entry removed, talent is able to be properly nurtured.

And the efforts are paying off. In 2016, HKJC opened the Hong Kong Equestrian Performance Plan, a merit-based program that provides team members with support personnel and competition horses. In 2018, Hong Kong collected its first-ever Asian Games gold medal thanks to the efforts of team rider Jacqueline Siu’s individual dressage victory. This program continues to grow, with more connections to young rider development put into place in recent years.

Combined with the impact and reach of HKJC-supported events such as the Longines Masters of Hong Kong and Asia Horse Week, the benefits of supporting equestrian sport and talent development are innumerable in terms of community engagement. Notably, the Jockey Club also supports the Jockey Club Youth Football Programme, collaborating with the Hong Kong Football Association and Manchester United to provide a similarly-constructed pathway program for aspiring football (American soccer) players.

Yuxuan Gets His Shot

When The Hong Kong Jockey Club elected to pluck a 13-year-old Yuxuan from the stable, where he was mucking stalls in exchange for lessons, and place him in the earliest formations of the Junior Equestrian Team, they succeeded not only in cultivating a talent that would reap rewards in the form of Asian Games medals, but also in setting a young man free to pursue his passions in a multitude of directions.

If you were to sit and look at Yuxuan’s riding career alone, it reads impressively, telling the story of a dedicated rider willing to put in the time it takes to eke out success in a demanding, often isolating sport. After completing secondary school, and through the support of the HKJC Junior Equestrian Team, Yuxuan traveled to Australia to work under show jumper Clive Reed and would also spend time training with Lucinda Fredericks. Shortly after moving to London to begin his undergraduate studies in philosophy at King’s College, Yuxuan met the man who would become his most supportive owner: Howard Green. “He’s still my main owner today,” Yuxuan explained. “He lives in Hong Kong but has his event horses based (in the UK). He just kind of put his faith and trust in me and gave me this opportunity.”

Suddenly, Yuxuan, despite his relative inexperience in terms of competition (he’d primarily competed on the local circuit back in Hong Kong and commented that the sheer size and number of competitors at shows in Australia blew him away), found himself with three talented horses to ride and produce. He wasn’t about to squander this opportunity. 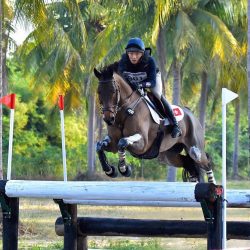 Yuxuan Su and All or Nothing. Photo by HorseMove Thailand.

That hard work and dedication paid off: Yuxuan won individual bronze in eventing at the 2017 FEI Asian Eventing Championships and was a member of the silver medal-winning team at the Games in 2019.

But among the successes – and the toiling it took to get to them – existed an entirely separate part of Yuxuan’s life.

After his time in Australia, Yuxuan took a gap year, one in which he “completely didn’t see a horse”, to travel and volunteer with a friend, see a little more of the world. This experience coupled with an innate desire to do more and be more solidified Yuxuan’s conviction that he keep one foot in the horse world and with the other continue to explore the vast rest of the world.

“I missed being around the horses, but the travel confirmed that there is a massive world and a lot to see a do out there,” he explained. “I feel like that’s where my life is now. I want to still be in touch with the world and have interests and passions outside of horses whilst this eventing is my career.”

And so it’s with this general curiosity that he descended on London, eager to begin his first year of university. When the opportunity from Mr. Green came, there was one caveat: the horses were being kept in livery in Leicestershire – two hours by train from London.

“The horses were in full livery, so I spent Monday through Wednesday or Thursday in London and the rest of the week I would travel and stay at the stables with the horses,” he recalled. “I had masses of support in that I didn’t have to worry about the horses when I wasn’t there. But at the same time, it still felt like I threw myself in the deep end. Mentally, it was tough to deal with the riding and the added pressure of going to school and moving to a new country where I knew no one.”

I don’t detect any regret or self-pity in Yuxuan’s voice as he recalls the hustle of his university days. “I kind of have this thing where I just say yes and deal with it after,” he laughs. But then he sobers a bit. “As a consequence, I kind of threw myself into this space of being in uni, having these really nice horses to take to events, and this pressure to represent Hong Kong and qualify for the Asian Games…off the back of having done nothing. It didn’t really sink in until I started going to these national events in the UK, I realized I had been a big fish in a small pond for so many years and that this was a whole new world.” 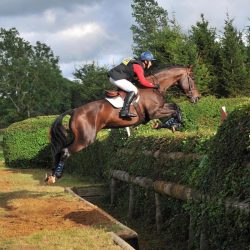 The pressure and the unknown are enough to make anyone question their reason why. “I was at a point where I did take a hit to my confidence in my riding, and I didn’t know if I was good enough for it. I was almost convincing myself I didn’t want to do it. Looking back, I can see that it was all just brand new to me and that there was a lot of this pressure – a lot of it from myself.”

Several years have passed since those grit-it-out days in university. Yuxuan says he’s been able to find more balance, and this year off from the Asian Games and Championships cycle will allow him to focus on building his partnerships with his small string of horses. He’s still not flush with spare time, however: he’s just completed his Master’s studies in bioethics and is preparing to embark in pursuit of his doctorate next. He is, in a word and perhaps an understatement still, driven. But, he says, all of this perspective, these experiences and skills only benefit his riding career.

“I think it’s quite easy when you work in horses and in the equestrian industry to be fully consumed by it,” he explained. “Because it is so time-consuming and requires so much effort. So having some time outside of that has helped me to understand how everything fits in to the bigger picture. And I feel I’m really able to think critically about my riding, something I think I’ve taken away from uni.”

A lifelong athlete who also played rugby and competed in powerlifting, Yuxuan enjoys seeing the correlations among sports and applying concepts he’s learned elsewhere to his riding, and vice versa.

In all, it’s an athlete, a scholar, a professional who make up significant parts of Yuxuan’s identity, one that has been crafted and shaped by the world at large. And he owes a lot of this direction his life has taken to that early experience and exposure to horses as well as the support The Hong Kong Jockey Club and Mr. Howard Green.

“I can honestly say it wouldn’t have been possible without (HKJC and Mr. Green),” he said. “If I hadn’t been on the Junior team and hadn’t been able to go and train and compete abroad and be exposed to that world of sport, I wouldn’t have even considered it possible to do this for a living. So that sort of exposure to it and the initial access to these opportunities were massive.”