Many eventers have encountered a special horse, had a breakthrough competition, or experienced a revelation during training that changed … well … everything. In a new weekly series presented by Attwood Equestrian Surfaces, eventers share their ah-ha! moments. In the premier edition Boyd Martin, whose Windurra USA in Cochranville, PA, features Pinnacle and Sand Blend arenas from Attwood, recollects the story of the eventer he calls his “horse of a lifetime.” 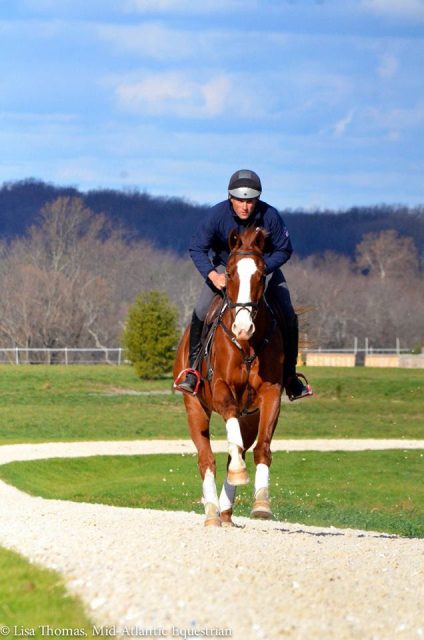 When I was growing up in Australia my first 13.2-hand pony was called Will He Do It; later I moved up to 15.1-hand Lenny, but when I was about 15 years old and getting taller, I needed a bigger horse. We found an 11-year-old, 16.2-hand off-the-track Thoroughbred called Flying Doctor for $1,200. He’d had a bit of basic training but had never been to a show, and at the time my parents didn’t know much about horses. I decided to try him over a few fences and at the first oxer I pointed him at, he stopped dead in his tracks and I fell off. My dad said, “I think we should buy him because he didn’t run away!”

In hindsight Flying Doctor wasn’t actually that talented, but he had a heart of gold and the toughness of a gladiator. Being an off-the-track Australian Thoroughbred, he also had no “quit” in him. Neither of us knew too much but he took me to my first one-, two- and three-stars and eventually my first four-star in the year 2000.

At our first four-star at Adelaide, he did a great dressage, roared around cross country and had one rail down for a 5th place finish. At this point he was starting to get a bit old and a bit creaky in his joints so I planned to give him six months off after the event. I decided I’d like to take him to one more four-star before he retired, at the same event the following year. 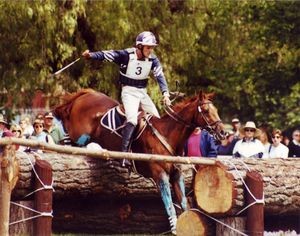 These days my horses receive lots of pampering to keep them at the top of their game, but things were a bit different back then. During our preparation for his final four-star I was riding around in Heath Ryan’s indoor, which had a mixture of wood chips and horse manure for footing. I didn’t realize he was limping a bit while I was doing dressage. Heath had a great old vet named Shanksy who I’d never seen without a cigarette in his mouth. He told me to wait right there and headed over to his truck. He came back with a big needle and syringe, still with the cigarette hanging out of his mouth, pulled off the boot and shoved the needle into the horse’s ankle. Then he put the boot back on and told me tomorrow the horse would feel like new. Old Shanksy was right, and Flying Doctor was sound as could be the next day.

I figured because he was such a seasoned campaigner I’d just give him one CIC3* in preparation for the four-star. I chose Golbourn CIC3*, which was about three weeks before Adelaide, and I couldn’t believe it when I got there and pulled him off the truck: he was three degrees lame with a foot abscess. He was in absolutely no condition to do his only preparation event for the big one. So off we went to our second four-star, having not competed at all since our previous four-star a year before. 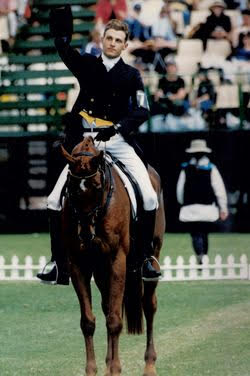 It was bit daunting not to have any lead-up events but to his credit, he was such a legend that he dug deep and gritted his teeth and went clear around the big, tough cross country track in the long-format CCI4* at Adelaide. I still remember the thrill that it gave me: He may not have been a world champion, but he was a good, tough old horse and really powered around the massive, solid course.

There was one particularly dramatic moment on the steeplechase course. It was a four and a half-minute steeplechase, and we were galloping as fast as we could at the big brush fences to make the time. I had the miss of all misses as we took off over one fence and Flying Doctor skidded through the jump. There was brush flying everywhere and I nearly got pitched off, but he somehow found his feet as he landed on his nose, picked himself up and kept on galloping. Unfortunately the fence was next to roads and tracks course, so a number of my friends were witness to that moment and were ribbing me before I headed out on cross country!

As a competitor Flying Doctor was heroic, achieving far more than I ever imagined, and he really inspired me by giving me a taste for the four-star level, an addiction I’ve never been able to kick. These days I would never consider buying an untried, 11-year-old horse off the track, but he really helped launch my career as an event rider.

After Adelaide I felt he was getting a bit too old to keep running him over big cross country tracks so I sold him to a kid for a couple grand and he did Pony Club for a few years. He was a legendary wind-sucker and towards the end of his time with me, his front teeth had almost worn away. After his stint in Pony Club, he retired to live out his days. Unfortunately he was bitten by a poisonous snake and died under a tree in his paddock. In a way it was a fitting and dramatic end for a horse that exceeded everyone’s expectations.