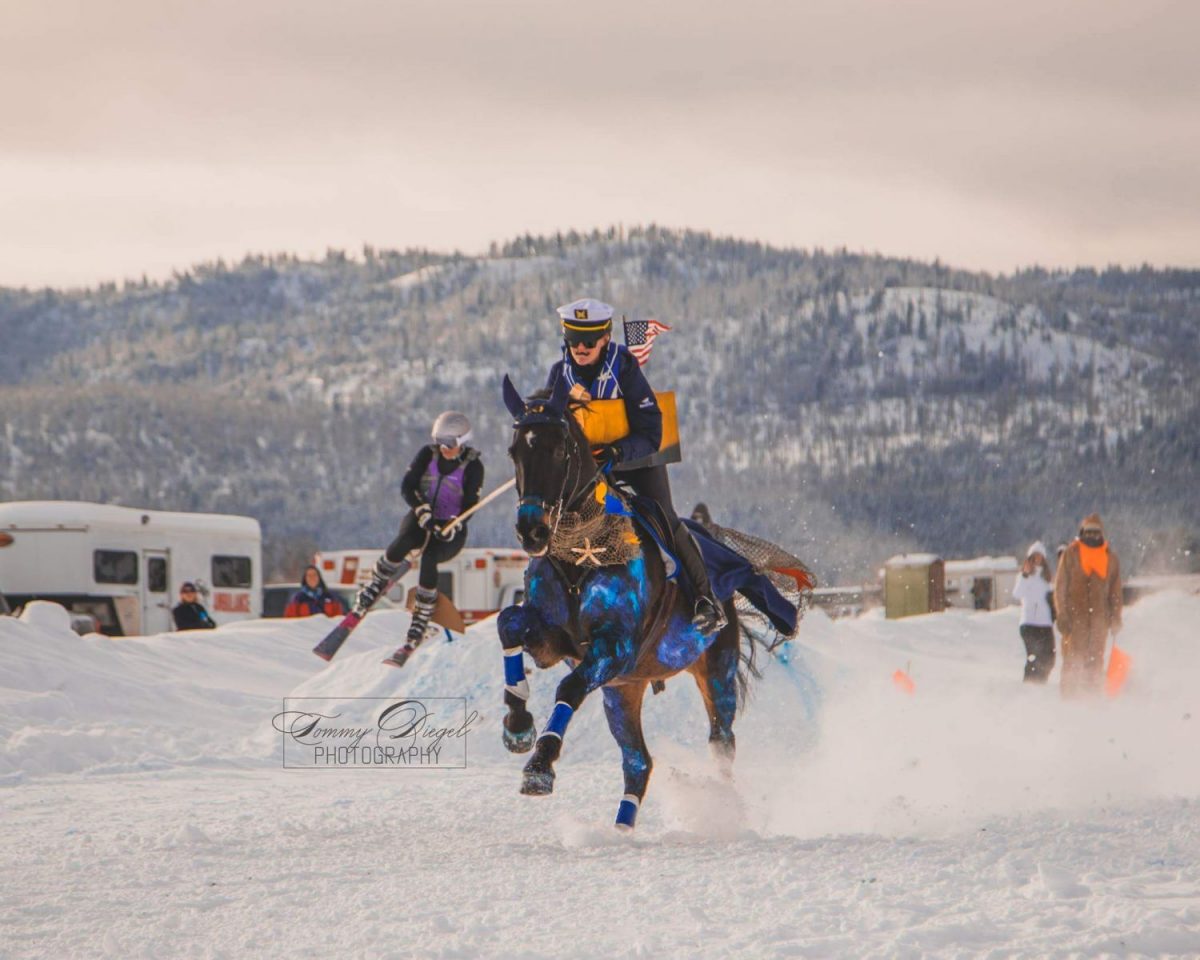 Jen Johnson in the tack and Sarah Broussard skiing in the Skijoring at Rebecca Farm costume class. Photo by Tommy Diegel Photography.

Sarah Broussard is a woman of many talents, among them mom, rider, event organizer, firefighter and cancer-fighting superhero. And she’s also quite the skijorer, apparently!

Derived from the Norwegian word skikjøring meaning “ski driving,” skijoring is a winter sport that combines skiing and horseback riding. The sport consists of a horse pulling a skier through an obstacle course, all while hitting jumps that range in size from three feet to nine feet high. Competitors are judged based on how long it takes for them to run the track, which stretches approximately 850 feet from start to finish.

On the final weekend of 2017 Sarah handed the reins over to a mustachioed sea captain, Jen Johnson, and laced up her ski boots to celebrate Rebecca Farm’s inaugural skijoring competition.

Sarah made the course look easy, but Rebecca Farm’s path to hosting the event wasn’t without its challenges. Snow, of course, is critical to the sport — and there wasn’t a snowflake in sight throughout the month of December. With barren ground and no snow in the forecast, Sarah and her team feared their foray into skijoring might be over before it even began.

Fortunately, snow started to fall shortly before Christmas. Sarah drew a celebratory breath of relief and she and her team set to work prepping the facility. But their relief turned to concern as ominous weather reports circulated; record snowfall and low temperatures were predicted for the New Year’s Eve weekend.

“After a dry December, the irony that there could, in fact, be too MUCH snow or temperatures too cold for the horses? Well, that was a heavy weight. We wanted to have a great event but safety is the top priority. We were fighting for a way to have both,” Sarah says.

As the predicted winter storm barreled down on the Flathead Valley, Broussard’s team soldiered up. Throughout the frigid post-Christmas week, they were determined to make the inaugural run of Skijoring at Rebecca Farm a reality. 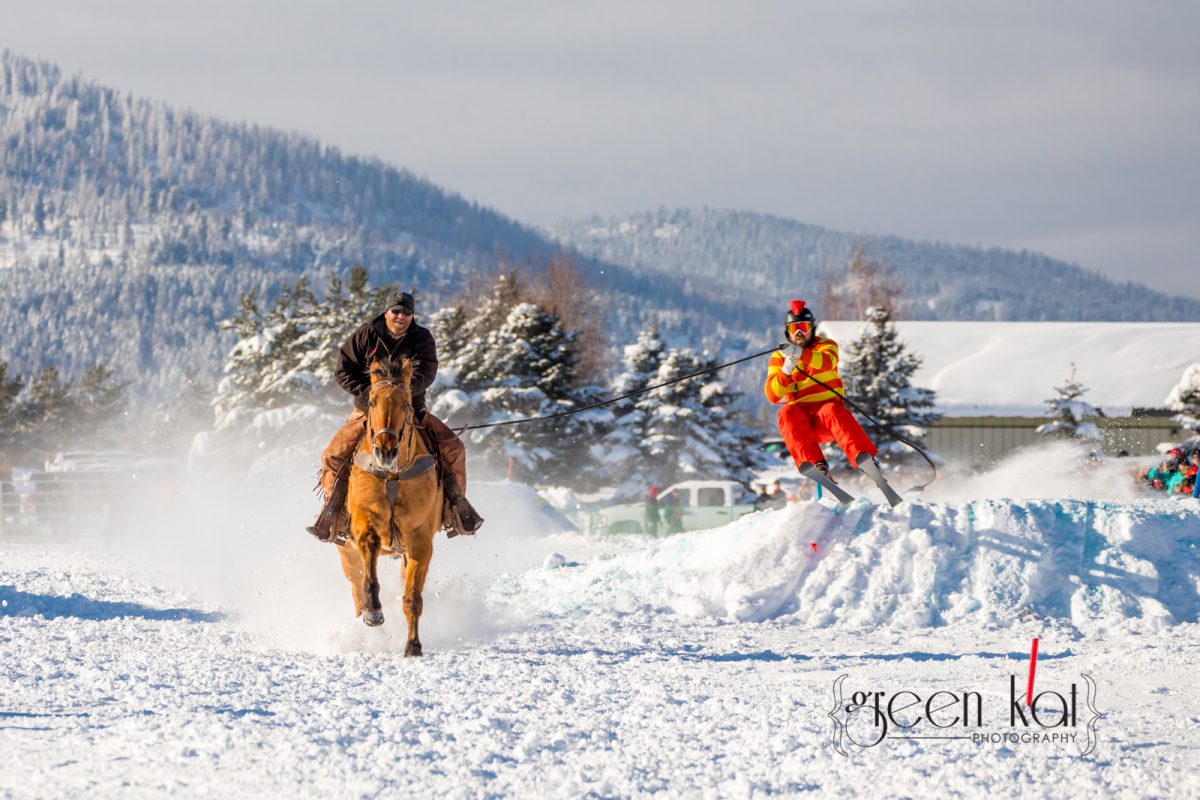 ‘Come Hell, Heavy Snow or Detours, We’ll Be There’

Simultaneously, Skijoring America board member and open division competitor, Richard Weber and his longtime teammate and travel partner, Tyler Smedsrud, were loading up five horses. The pair was preparing to make the 18-hour, 1,200-mile trek from their home base in Ridgway, Colorado to Rebecca Farm, where they would lead preparations for the course. Richard and Tyler are some of the sport’s most visible and committed competitors; in addition to contending in the top division, the duo volunteers most of winter weekends building courses for events sanctioned by Skijoring America.

Richard believes that ensuring the appropriate blend of safety and challenge for sanctioned courses is an important part of skijoring’s future. It is that devotion, along with the adrenaline rush, that have had him trucking through winter storms, power outages, and significant detours over the last two years.

“After six years of skijoring locally, I decided to get serious,” he explains. “For three years, I’ve been on the circuit. I put 15,000 miles on last season; it was worth it. Those people out there on the skijoring road, they’re family. I’ve also learned a lot about what works and what doesn’t, and I want to help others.”

Sarah, Richard, Tyler and the scores of other hardy event volunteers would need all of that determination and more to face down the challenges headed their way: The evening of Friday, Dec. 29, just one day prior to opening ceremonies, snow and high winds belted the Flathead Valley. As highway crews struggled to keep major roadways open, the newly created skijoring course, parking area and roadways at Rebecca Farm were buried in layers and drifts of snow. And while most of the Flathead Valley battened down the hatches, skijoring crews fired up equipment and started working in the early hours of Saturday to make a way for the event. 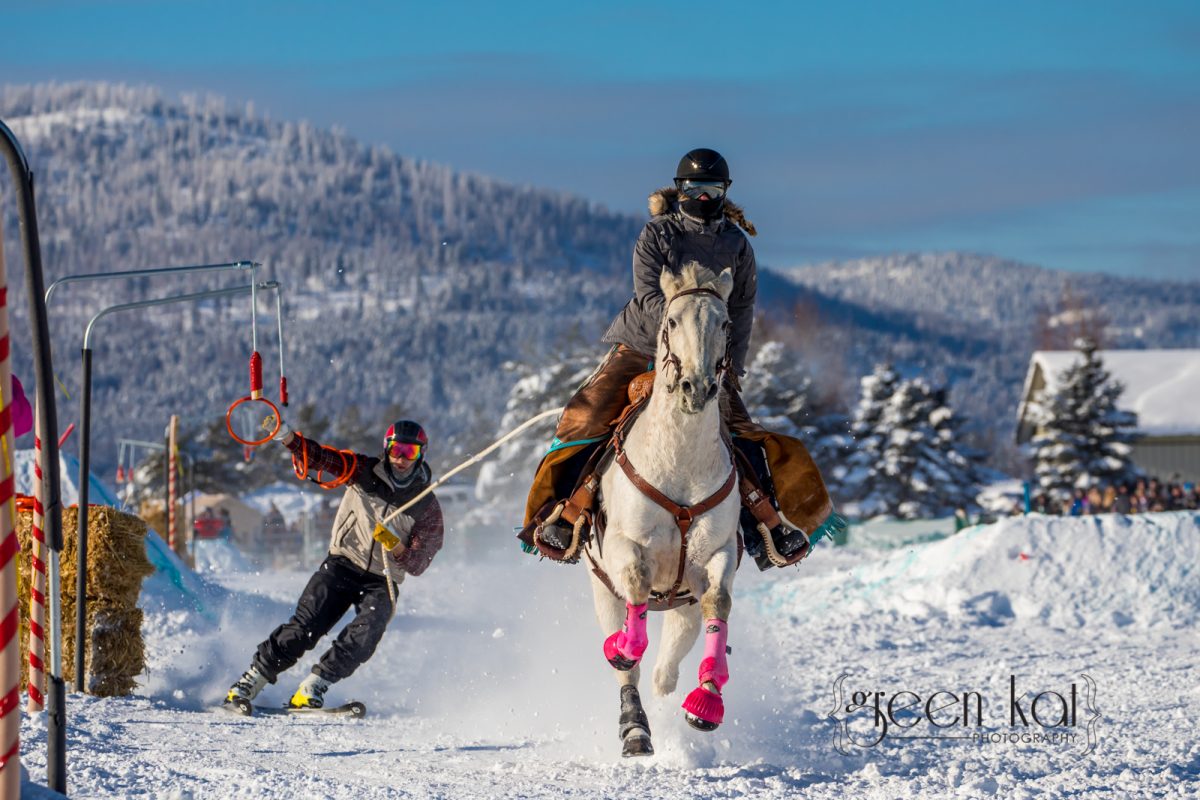 It Takes a Valley

“For me, Saturday was very challenging but there was a real sense of camaraderie with the crew. We had 10 rigs out moving snow,” Sarah says. “Earlier, on Thursday and Friday, we needed water to reinforce the jumps, and our West Valley volunteer firefighters brought the fire trucks over and jumped in to help. It was crazy but that whole weekend really had a community feel to it. People helped out any way they could.”

In the end, the snow was cleared, and though festivities kicked off an hour late, happy spectators would say the event itself was a small miracle. Considering the “can-do” attitude of the participants and crew, though, the success of Skijoring at Rebecca Farm might well have been predictable.

“I love to see the sport growing with people just as stubborn as I am, that don’t let obstacles get in their way,” Richard laughs. “Come hell, heavy snow, or a 400 mile detour, we’re getting there.”

Richard was not alone. Both out-of-state and Montana horse trailers began to roll into Rebecca Farm early Saturday morning. In the end, despite the weather, approximately 80 teams ponied up and thousands of spectators braved the cold to partake in the fun.

“When it comes to these kinds of events, I always say that ‘it takes a valley.’ Skijoring at Rebecca is certainly no exception,” emphasizes Sarah. “The community, the sponsors, the local volunteers, the folks from Skijoring America – they were all incredible. They pulled together and made this event — which felt impossible at moments — possible.”

And Richard couldn’t agree more. “I’ve been to a lot of great events, but Rebecca Farm had an amazing group of volunteers – maybe the best I’ve ever seen.” 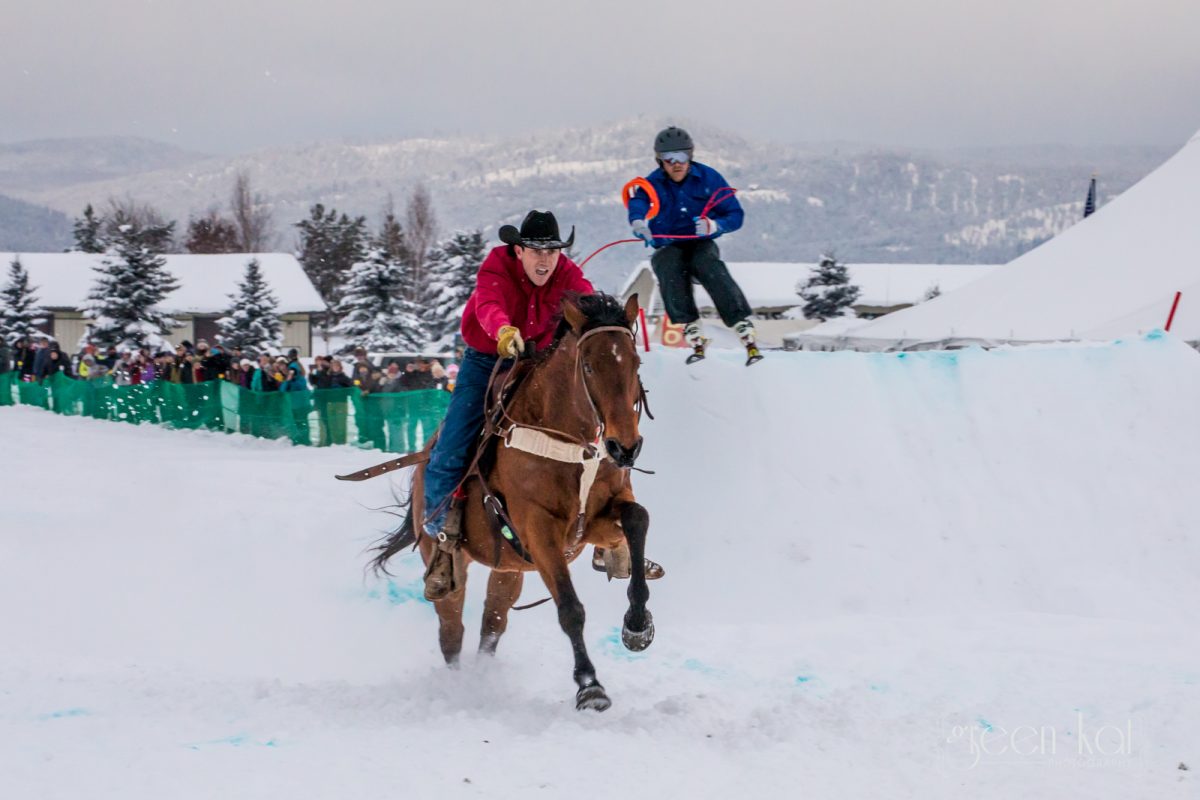 Local racers scooped up several weekend honors and landed at the top of Skijoring America’s 2018 leader board for the Open and Sport Divisions. Scott Ping, the Whitefish resident affectionately called “The Grandaddy of Skijoring,” rode to first place in the open division rider standings, finishing with a total of 90 points. Ping’s trusty steed, Kona Koffee, led the field for open division horses with an overall score of 90 points. Open division skier, Toby MacIntosh of Columbia Falls, jumped his way to the top of Skijoring America’s rankings with a perfect score of 100 points.

In the sport division, Kalispell native Kali Kitchen headed the rider leaderboard with a total score of 48 points. Longtime skijoring competitor Bart Slaney matched Kitchen with 48 points of his own, landing the lead for skiers in sport.  Topping sport scoring honors for horses with 24 points was Royaleigh, ridden by the Flathead Valley’s Jennifer Butler.

While held the last weekend of 2017, Skijoring at Rebecca Farm in fact served as the opening event for Skijoring America’s 2018 season. Learn more about the sport of skijoring here.

Watch videos from the event here.

This story is edited from a press release.