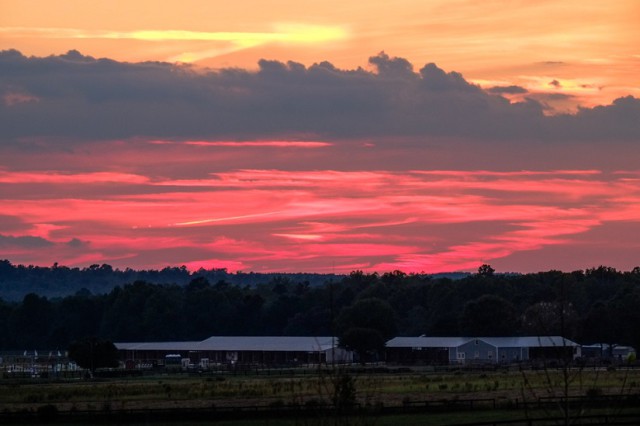 I feel that this time of year most East Coast eventers surrender themselves to the constant beating from winter and ride inside. Most use this time in a smaller, crowded arena to work on their dressage or stadium, ironing out our technique and accuracy for better dressage scores or working the ever popular grids to prepare our mounts for what lies ahead in spring.

But its not easy to motivate yourself, or your horse for that matter, to ride on a daily basis when winter hits you in the face as soon as you walk outside your front door. So, this past fall, I made a plan to meet winter head on.

This winter it was my goal to aim for Aiken and compete in two horse trials before the spring season started up in Area II. This would be my first time traveling south, so I was champing at the bit for an adventure. After looking at the USEA omnibus about 80 times and going over my wife’s and my show schedule another 80 times, I picked the two shows I would enter.

Preparing for our journey

As this was my first time traveling to Aiken, I quickly had a mile-long list of questions about everything. Having finally chosen my first show, Paradise Farm Horse Trials (Feb. 13-15), the search began for a place to stable our horses, as well as a place to stay. I believe I asked well over 30 people for their advice and finally decided we would be stabling and staying at Full Gallop Farm. It seemed far too easy to have both us and our horses in the same location.

Plans for my first trip south were falling into place. I had arranged to take a fellow boarder here at Sunset Hill and her horse Rocco to Aiken as well, so we would be able to share the fuel cost. I also had alerted family that lives in Atlanta that we were within a reasonable drive if they wanted to experience their first horse trials.

The last final step was to make sure Serendipity (Beans) and I were well prepared for the show ring. I scheduled a few back to back jump lessons with Kristen Bachman, schooled dressage with my built-in dressage trainer of a wife, Nicki, and rode every day before we departed. A true feeling of preparedness overcame me as Nicki and I packed the trailer with everything we might need. 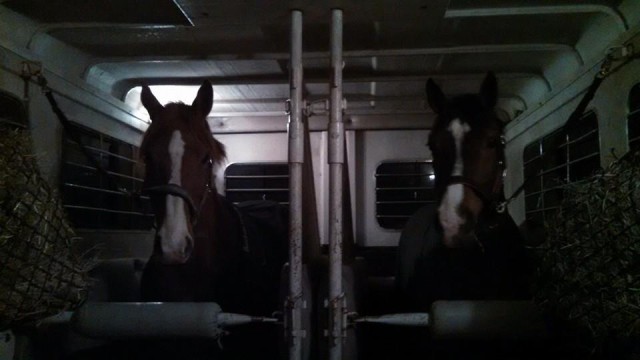 Ready to hit the road.

The drive to Aiken would be a 560-mile trek that, if you could drive straight through, would take about 8 hours and 40 minutes. So we planned to head down the road no later then 4 a.m. to beat rush hour traffic both around Washington, D.C. and Richmond, Virginia.

We loaded the three horses (Beans, Rocco and Nicki’s dressage mount Deliza) and made our departure from Maryland. With Nicki and I taking turns driving (as we are not very good at preparing ourselves for a trip and typically are up until midnight getting packed therefore not getting more the two hours of sleep), we made it to the “America’s favorite highway oasis & gateway to the southeast,” more affectionately known as “South of the Border.” 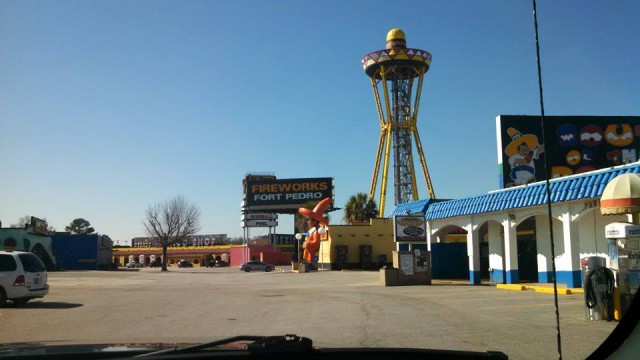 South of the Border!

South of the Border is a rest stop and road side attraction originally built in the late 1940s. You are teased by bright colored humorous signs for miles prior to entering North Carolina and can see the signature, for lack of better terms, Eiffel Sombrero well before the exit. After South of the Border, there are only another 165 miles left in the journey to Aiken, which seem to crawl by but are totally manageable.

Taking time to settle in

We arrived in Aiken by 3 p.m. to awesomely mild temps in the high 50s, which, after temps struggling to get out of the 30s at home, was a true blessing and all the fuel we needed to unpack and settle the horses into their new temporary housing. Full Gallop Farm is owned by Lara and Dan Anderson andconsists of five barns, 20 paddocks and a giant cross country course. They plan to host a total eight USEA recognized horse trials this year, so they exude professionalism and calmness despite any issue that may arise.

After Beans and Deliza settled into their stalls, we got our living space set up in the trailer, which we were instructed to park next to the barn. I then walked around the barns and took stock of the more permanent winter inhabitants of Full Gallop. We shared a barn with upper-level eventers Tracey Bienemann, Beau Guimond and Dr. Stephanie Davis of Team Ride Safe, among others that I hadn’t had time to meet yet.

The lst thing we did was find a place to eat. I received several suggestions for places I needed to visit for a gastronomic experience from Aiken alum. Dave’s Grill and Grocery, known for its burgers and fries, is a small roadside gas station just down the road from Full Gallop with a small convenience store-sized building that houses this diamond in the rough.

Maria’s Mexican Restaurant is the local eventer watering hole where many upper-level eventers can be seen talking business; planning show schedules; or treating themselves, their clients and their staff to a well-deserved margarita. And, finally, the most Aiken famous Takosushi, where “far east meats southwest,” which, admittedly, we did not get the time to eat at on this trip but will be the first place we dine at upon our return. 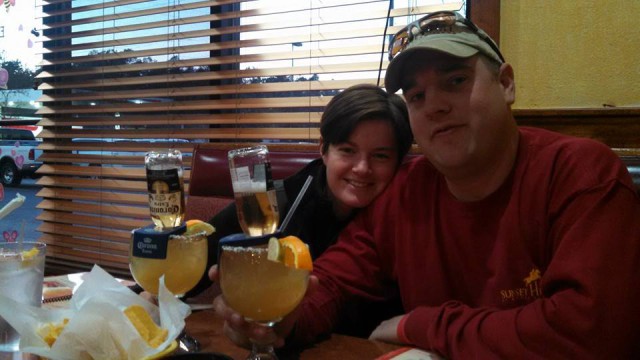 No matter where you eat in Aiken, it seems likely you will run into a face you recognize. Sitting down to dinner, you may see Kate Chadderton, Doug Payne, Dom and Jimmie Schramm, Kim Severson, Boyd Martin, Phillip Dutton or Sally Cousins. The amount of eventing elite that make a winter home in Aiken is incredible and feels a bit like living in a version of Eventing USA magazine. Prepare yourself to be slightly star struck when hanging out in Aiken.

One of the best things about Aiken is the awesome footing everywhere you walk. The ground down in Aiken is a soft, sandy clay with no stones, which screams to be ridden on. The area was originally made “horsey” in the 1890s when the wealthiest of wealthy yanks would bring their horses south to keep them working year-round. And this rings true even today.

When it’s cold the footing remains workable, as the sand doesn’t hold moisture, so it doesn’t freeze solid. Because of this, we could ride everyday at Full Gallop and most days twice. Whether schooling in the ring, doing trot sets around the property or hitting the cross country course, the footing was always consistent.

Now keep in mind I’m from the Maryland, where the ground typically is one of the following: soaking wet and muddy, desert dry and hard as rock, or frozen, so having decent footing everywhere I went was awesome. Also, as I mentioned, being in Aiken made it possible for some of my non-horsey family to come visit and see what eventing is all about.

I was more than honored when my Aunt Beth, her grandson James, and my Grandmother Erla were able to make the two-hour drive east to watch and learn. So the pressure was truly on to have a good round. 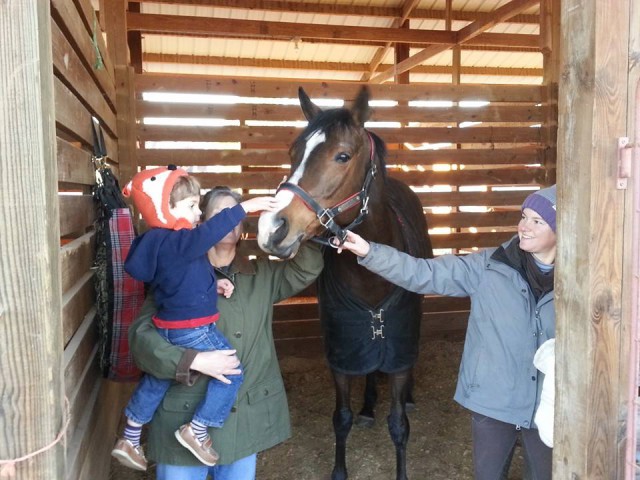 The family learns what eventing is all about.

Lastly, the weather while we were there was amazing. Highs in the upper 50s, sunny and just perfect when you have been dealing with a cold winter at home. It was warm enough for both of our horses to get a bath, which hasn’t happened in over a month. Besides riding, we spent most of the time just sitting outside hanging with the ponies, watching others ride, and hanging with old and new friends. This trip was a true winter oasis vacation for both Nicki and I and a welcome slowdown in our normal busy lives. 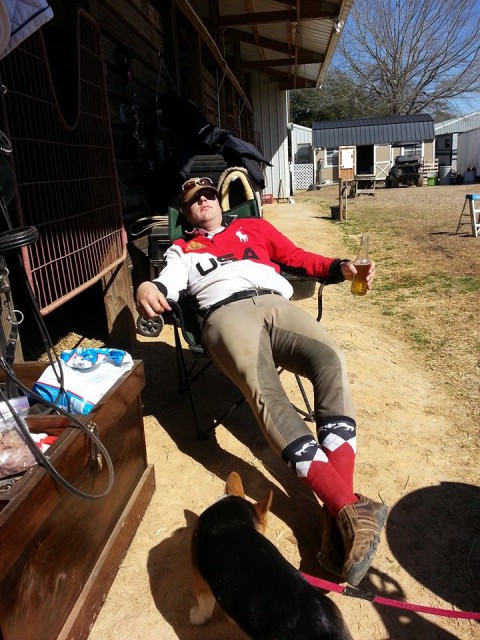 Not only was this my first Aiken trip, it was my first two-day horse trials. Being able to focus on each phase more independently than the typical horse trial took a bit of getting used to. My nerves still get to me a little bit on show day, but being able to focus solely on each individual phase helps keep the mind focused on the job at hand. Paradise Farm is just over a mile down the road from Full Gallop, making preparations for the show extremely easy.

Saturday was dressage and stadium with my ride times starting at 10:15 a.m. and finishing up around noon. It was a pleasant enough day but a touch windy, which had the dust and sand flying around. Beans was originally dealing with the excitement well, staying cool calm and engaged, until the caution tape on the rope separating the warm up form the rest of field flapped. We recovered and entered our ring and put in a decent test that could have shown more difference in the lengthenings, but was a decent enough test for a 30.7.

Next was stadium, which looked to be a challenging course. The topography was rolling with lots of ups and downs. On top of that, the wind had picked up even more, and planks were starting to be blown off the standards. I watched a handful of riders before my go, with most of them going clear. Then it was my turn; we had a decent round, taking a rail at the first jump but going clear after that.

Sunday was cross country, which I was more then ready for. Beans is a quality three-phase horse, but going cross country is where she excels. The course had some fairly advanced questions considering this was our first cross-country round since November. But, regardless, we jumped around like seasoned professionals with a just a few odd spots but nothing we didn’t handle well.

We completed the course double clear and feeling great, while Beans was ready to keep going. Our main goal for this entire weekend was to get another training NQR to compete Prelim later this year. We finished 13th out of 29 and got another NQR, so this was a successful event all the way around.

After cross country, we packed up the rig, loaded the horses, cleaned our stalls and headed back north. Our time in Aiken was over far too quickly. Five days had flown by, and our return home was made even more painful in that we were heading back to Maryland, which while we were gone had moved further north into the Arctic Circle.

From highs in the 50s to highs barely breaking the 20s was a true insult. I kept hoping that the truck would break down right outside Aiken and we would be forced to stay even longer. But, alas, Black Beauty was as tried and true as always. We made it home just after midnight Monday morning.

We head south again at the end of next week to compete at Full Gallop and will be staying at Paradise Farm (seemed easier to stick with what we know this time). The time is flying by, especially when we spent all last week not getting above freezing, and the cherry on top was 10 inches of snow this past Saturday into Sunday.

And it appears this week will be filled with fairly similar cold temperatures and weather patterns. Oh how easy Mother Nature is making my decision to travel south to the eventing mecca — Aiken, South Carolina.