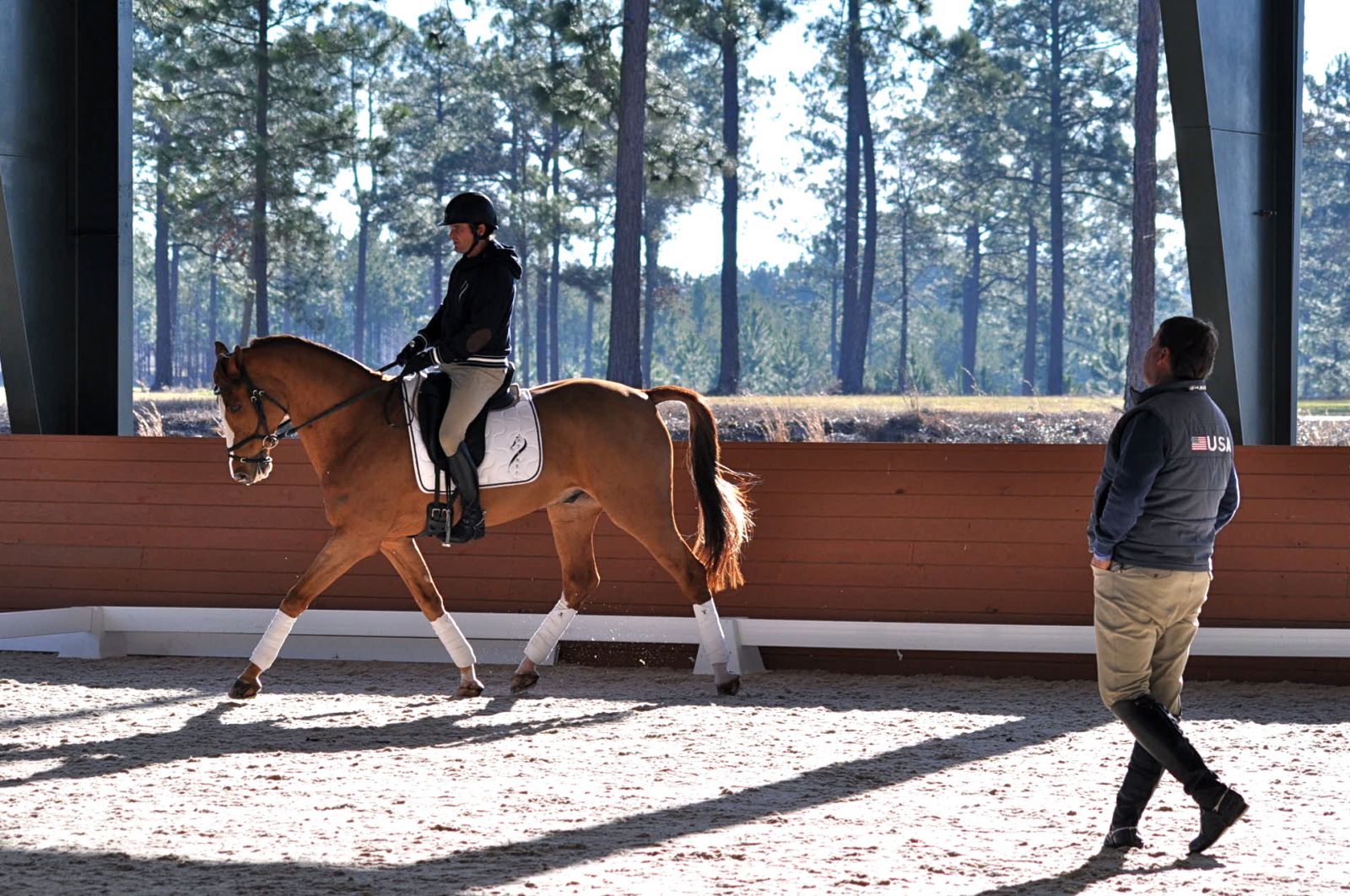 Today was the first day of USEF High Performance Training Sessions in Aiken, S.C., and everyone was excited to see the upper-level horses after their winter break. For me, it’s really fun to see how the horses have grown and matured even since their last fall competition, and lots of them seem stronger and better developed this spring.

I was able to go early in the morning and catch Phillip Dutton on Mr. Medicott (Cave) and Will Coleman on Conair (Joey). As David explained, today was more about seeing where everybody was in their training and what they’ve been doing since their last meeting together. The exercises today were more geared toward horses that were on the aids and letting the riders maneuver their bodies for better preparation for various movements on the flat. 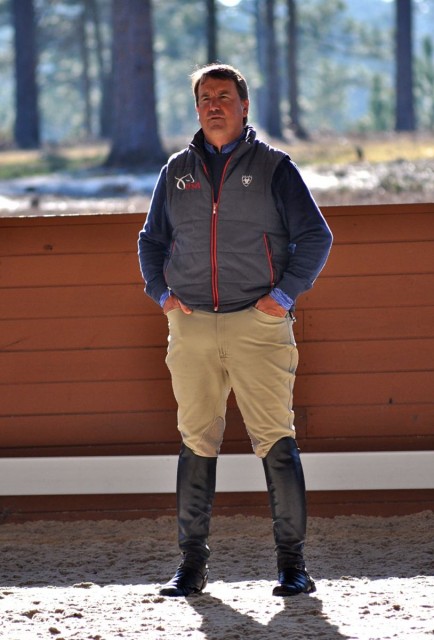 A lot of emphasis was placed on the quality and flexibility of the canter, and David had them use a lot of transitions within the canter to get the hind legs active and underneath the horses. Both Phillip and Will worked on going forward in the canter and then collecting, both on the centerline focused on straightness and within various lateral movements like leg yield and half pass. Each horse was able to use this to move their hind legs more underneath their bodies and increase their ability to collect correctly and softly with their riders.

I caught the end of Phillip and Cave’s lesson, and when I arrived they were practicing cantering down the centerline, focused on Phillip’s ability to have the first few steps of the turn exactly as he wanted them in order to affect the straightness of the horse. David said that especially on the centerline “controlling your weight and your balance is just as important as controlling his” when he referred to getting a score of 9 instead of 8 on the entrance in a test. “Make sure it’s as much about the quality of your movement as it is his,” he said as he worked with Phillip to get some more jump in Cave’s canter, with Phillip using his seat more than his legs to accomplish this. 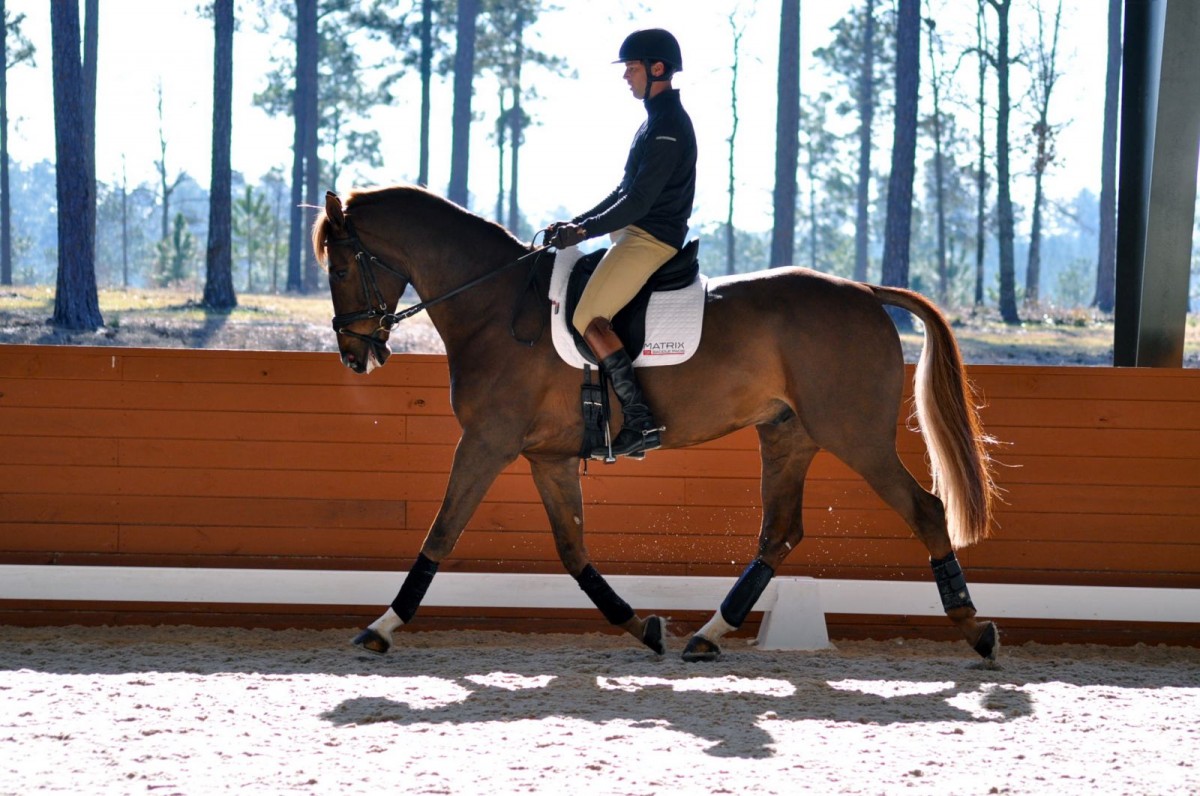 Will Coleman and Conair. Photo by Kate Samuels.

Will entered the ring after this, declaring immediately that riding Joey “is like riding Secretariat every day; he’s just a lot of horse.” Joey certainly looked buff today, and seems to be in excellent health. Will mentioned that they’ve been able to improve his general well being since acquiring him last year, and, in response, the horse is feeling his oats, so to speak.

With this pair, David worked on exercises of the same nature, going forward and then collecting within the gaits because, as he says, “it’s like doing reps in the gym — you do five this way and five the other way to strengthen yourself.” At one point, David decided to hop on Joey himself, as he felt like the horse could be a little more light in front and that he had a tendency to get a little low in his frame and then hang on Will. After David returned the reins, Joey was very responsive to Will’s half halts, and there was a noticeable difference in the step from the hind end up underneath his body.

Tomorrow there is jumping, which promises to be quite exciting as many of these horses haven’t had many proper jump schools yet, and most of them have yet to compete, so everyone is quite fresh! The schedule can be found HERE on the USEF High Performance Facebook Page.