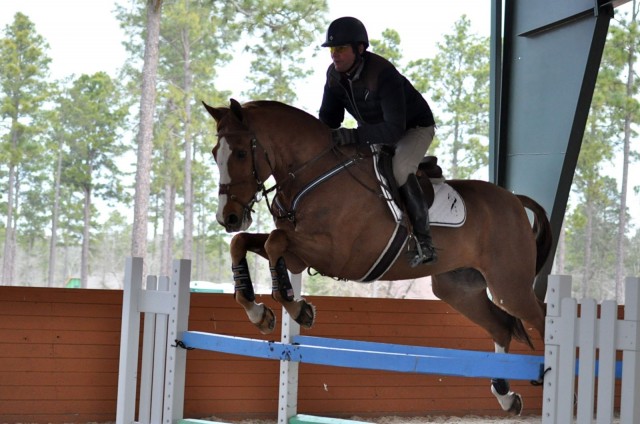 Today dawned the second day of USEF High Performance Training Sessions here in Aiken, and true to tradition at this point, it was positively freezing. The unseasonably bitter wind combined with the freshly clipped horses who are just starting to feel pretty fit made for some very energetic mounts today and some hard-working riders.

I was able to get to Stable View Farm early in the morning, dressed in all of the clothes that I brought to South Carolina. I caught the tail end of Phillip Dutton’s lesson with Mr Medicott (Cave) and then the full lesson with Jan Byyny on Fair Hill CCI3* winner Inmidair (JR) and Lillian Heard on Share Option (Whitey). All of these horses are very experienced at the Advanced level and beyond, and most of them are just beginning to get fit and have bigger jump schools in preparation for the first events of the year in February. In much the same way as the dressage lessons yesterday were aimed at figuring out where the horses were in their training and preparation, today’s jump lessons were not incredibly intense, but more aimed at working on the basics for both horse and rider. 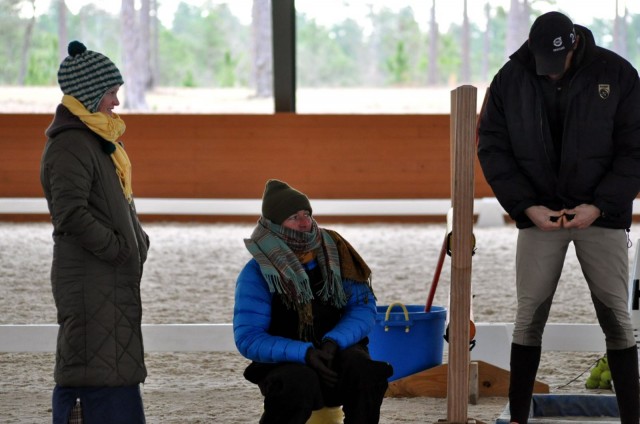 Caption this! (Kim Severson, Will Faudree and Will Coleman). Photo by Kate Samuels.

Today, Cave looked a lot more enthralled with his work and was unsurprisingly perhaps a little too enthusiastic at times. He’s an incredibly experienced horse having completed seven CCI4* competitions and an excellent jumper, but often known as one that you see on cross country with a variety of large bits and contraptions on his head to keep his enthusiasm under control. Phillip, on the other hand, can almost never be seen riding a horse with more than a snaffle, and today he was riding in a simple eggbutt with a figure eight, and it seemed to be working well enough.

The exercises that David set up involved a lot of bending lines and oxers to get the horses up and using their backs, but also staying responsive and listening to their riders on the backsides of fences. Phillip and Cave worked a lot on the effectiveness of the half halts in terms of using them to transition weight and balance to the hind end instead of just slowing down the front end. As an incredibly experienced and clever horse, Cave sometimes feels that he knows better and has no problem getting right up underneath the jumps. The pair, sometimes at odds last fall while getting to know one another, seem much more well adjusted to one another’s styles this spring. With their combined experience, this is great news for their prospects as members of the WEG team. 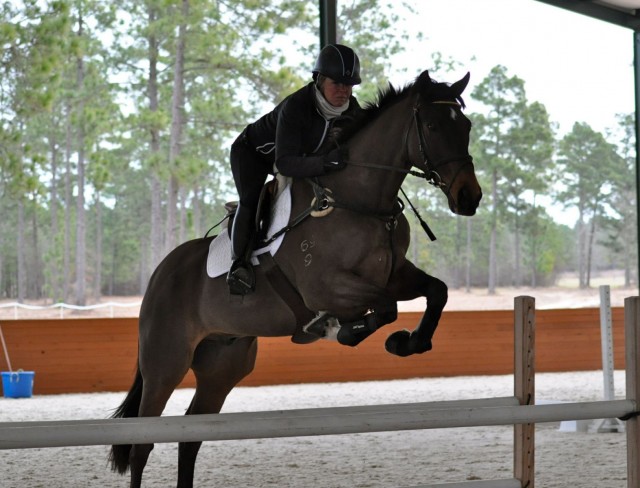 Jan and JR are your reigning Fair Hill CCI3* champions, and both were looking ready to go after a winter break. JR has an unusual jumping style, and my hat is off to Jan for her ability to stay with him when he flies up in the air two feet over the jumps. David worked with them to keep the motor running from behind when approaching combinations so that they could soften and be quiet the last few strides, as opposed to waiting more on the approach and having to accelerate into the first jump.

David asked Jan to get JR a little rounder through his back on the way to the fences and for her to keep her butt a little more off the saddle, keeping her weight light on his back. JR responded with even bigger jumps, but a little more rideability in between the fences. Hopefully we will see this pair at Rolex in the spring. 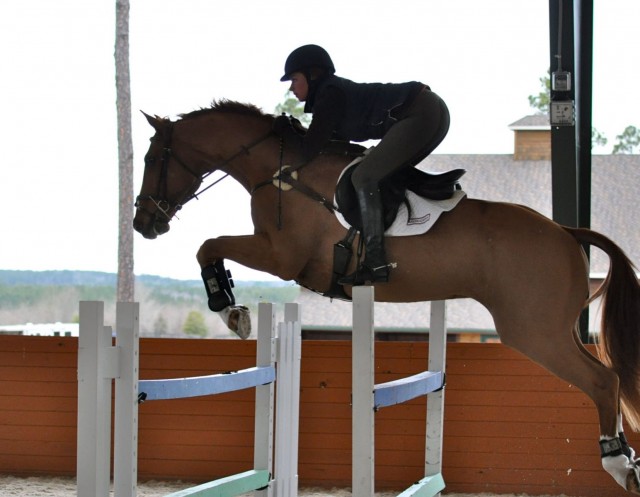 Lillian and Whitey were also in this jump lesson, having earned a place on the training lists through the merit of their solid performances at Jersey Fresh and Fair Hill this past year. This horse always amazes me with his seemingly nonchalant attitude and impeccable form over every fence. The other two horses were positively raring to go and seemed to be more like your typical naughty and slightly chilly upper-level horse, but Whitey was just loping over the bigger fences like it was a walk in the park.

This lesson started with a simple raised pole exercise through which the riders were asked to put two strides and three strides in between. While this may seem simplistic, it’s a very easy way to measure connection and rideability without putting too much concussion on the horses. David asked Lillian to work more on her tendency to stay focused on the first jump, even as she was clearing it. “NEXT NEXT NEXT” he chanted, as she quickly readjusted her eyes and balance to be planning for the next obstacle. As they moved on to actual jumps, David worked with her to prepare for the first fence better by bringing the whole horse around the turn from the hindquarters instead of turning the front end and assuming that the proper connection was there. Whitey was very unfazed and jumped everything very well.

Tomorrow is the final day of training sessions, although I will be unable to attend. The riders will be doing more dressage, and I expect it to be more challenging than the first day. If you have any interest in attending, the schedule can be found HERE on the USEF High Performance Facebook Page.