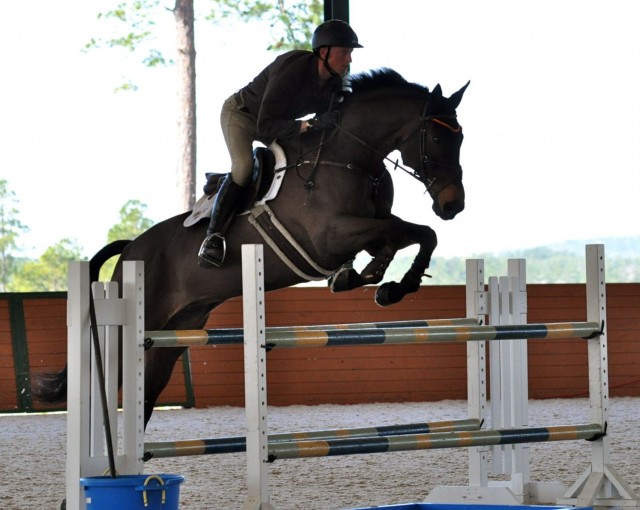 For the first time in a long time, the Aiken Training Sessions were not frigidly cold and blustery, but instead a lovely sunny day with a light breeze that kept both horses and riders comfortable. Coach David O’Connor must think we are all insane, as he travelled up from Florida this week after the original training sessions of last week were cancelled due to our freak ice storm and subsequent loss of power for eight days. “It looks like a tornado went through the town of Aiken,” he said, and he isn’t far off. Having endured the terrible temperatures lately, all the riders and spectators were ready for a good dose of jumping horses and sunny weather.

Today was also a special occasion because we got our first glimpse of the new US Eventing Show Jumping coach, Silvio Mazzoni. Already familiar with some of the riders, Silvio is based out of Middleburg, VA and Ocala, FL, which are two areas filled with Eventers. Not only has he been successful through Grand Prix in the Show Jumping arena, but Silvio represented Argentina in the 1998 World Equestrian Games in Rome in Eventing, so he is quite familiar with our sport, and the complications that go along with creating a clean round on the third day of competition. 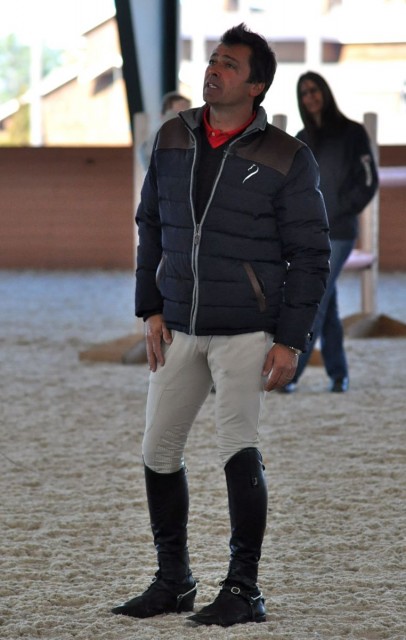 Today was very much a sort of meet and greet occasion, as Coach David O’Connor was there to introduce each horse and rider combination to Silvio. Not only were the sessions today aimed at introducing everyone, but almost all of the horses are heading to Pine Top on Friday, and therefore were unlikely to be making any grand changes directly before the competing.

I was able to watch Doug Payne on Crown Talisman (Tali) and Will Faudree on Pawlow (Ernie) for the second set of the morning, and while it was a little difficult for spectators to hear what was going on, I managed to grab a few nuggets of wisdom. The first and most noticeable thing was that Silvio had set up a much more complex grid to begin with than we usually see in the training sessions. There was a raised cavaletti to a regular pole, followed by a small vertical to another pole, and then to an oxer which grew in size. The distance between the vertical and the oxer was quite short, and combined with the poles, it effectively kept the horses on their toes and also forced them into a deep distance for the takeoff, working towards a rounder and more difficult arc over the jumps. 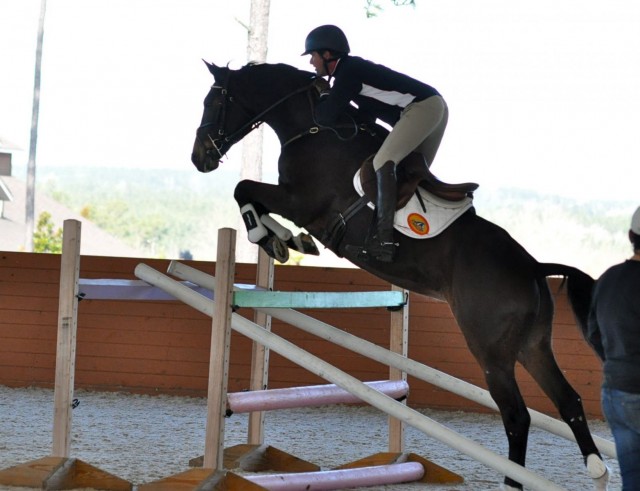 Will Faudree & Pawlow through the grid. Photo by Kate Samuels.

Silvio was very soft spoken, and made only a few minor adjustments to each horse and rider pair. He was consistently adamant about riders keeping their shoulders back, and using their balance to insure that the horse was properly prepared for both the takeoff and landing of each jump. Doug’s horse Tali tends to be a bit slow off the ground, and Silvio worked with Doug to encourage Tali to decrease his hesitation on the takeoff. Will’s horse, Ernie, was feeling a tiny bit careless today, and so he got to use the channeling poles through the oxer (as seen above) in order to get a little better quality jump and increase his carefulness for the day.

While I wasn’t able to see anything absolutely ground shattering today, it must be said that I thought Silvio did a quiet, thoughtful job with what is undeniably a difficult job. To enter into a whole new world of riders who are quite experienced and competent and immediately take stock and control is a challenge, to say the least. As he left it today, each rider left with something small to take home a practice a few times on their own, but I know we still have more to see of Silvio Mazzoni’s expertise.