On Sunday, August 24th, Caber Farm Horse Trials hosted a retirement ceremony for Area VII's Intermediate-level eventer, Worth The Wait. Having completed 48 events with his adult amateur rider, Aimee Witherspoon, this Holsteiner gelding is a shining example of why amateur horses are so loved in our sport. Aimee wrote the following tribute to honor him. 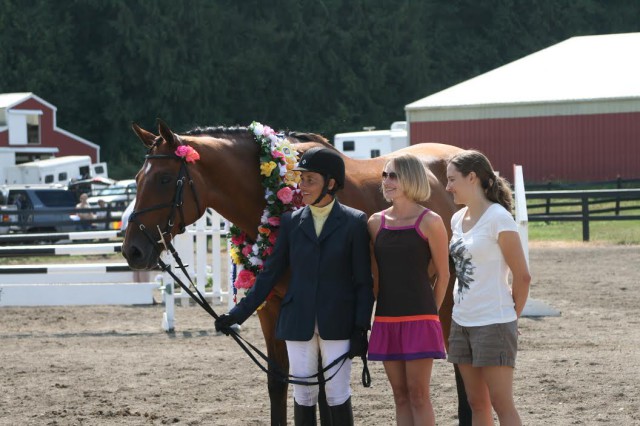 Worth The Wait during his retirement ceremony alongside Aimee Witherspoon and her two daughters. Photo by Maggie Rikard.

I would like to thank my coach, John Camlin, and my friends and family for all the support they have given me in keeping this horse going and achieving far more than I ever dreamed. There were times when I would be walking a cross-country course and start wondering if I would survive. John always patiently told me, “If you just ride the way you have been trained, your horse will take care of the rest. You have a horse who takes care of you.”

Now, here’s the story of Worth The Wait:

I first encountered my horse in 2005 at my trainer’s barn. I was in the process of selling my fourth horse who had failed to enjoy eventing. I had dropped by to tell her I was thinking about changing careers to some other kind of riding, when she said, “I have just the horse for you.” I said, “What’s wrong with him?” She said, “He bucks people off and he flunked his flexions so he isn’t really sellable. But a friend got the buck out of him so he will be fine.” She also told me this six-year-old horse was really special and would be a great horse. My thought was, “What would possess me, an old lady, to buy a bucking, lame horse?” But it was love at first sight. 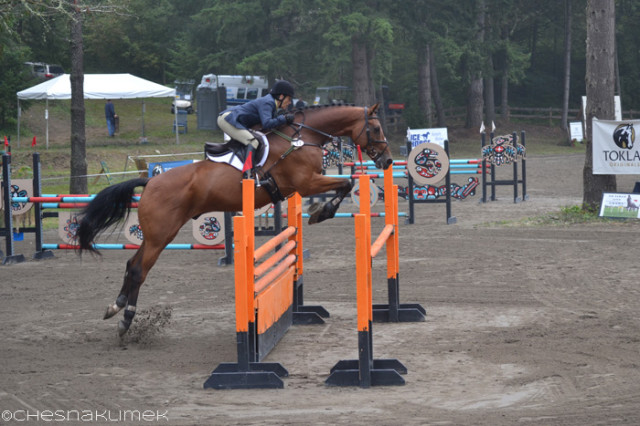 Aimee Witherspoon and Worth The Wait competing at Aspen Farms. Photo by Chesna Klimek.

That was August 2005, and I rode him at Caber Farm at the Novice level for his first event. He literally cantered the cross-country fences without picking up his feet. He hit more than a few show jumping fences. I wasn’t sure what I had, but I was so glad he did all three phases without objecting I thought he might be a good back-up horse. I turned him out that fall and let him be a free roaming pasture horse.

During that time, I figured out he had back pain and discomfort under the saddle area, hence the buck. The back pain also explained the flunked flexion tests. I also learned he was a well-bred Holsteiner and that he had had OCD surgery on both stifles as a nine-month-old colt.

The following year in 2006, we did a couple of clinics and I decided to move up to Training level. He started jumping instead of cantering fences and we developed a solid partnership. He went on to be Training Horse of the Year in Area VII.

He let me know that he had requirements under no uncertain terms. He needed 24/7 turnout or he got cranky and stiff. He wanted a pasture buddy as he loves a friend. I was not allowed to hit him harder than he deserved, or I would eat dirt. He also trained me that I had to mount in two-point as he never lost his memory of the poor saddle fit. 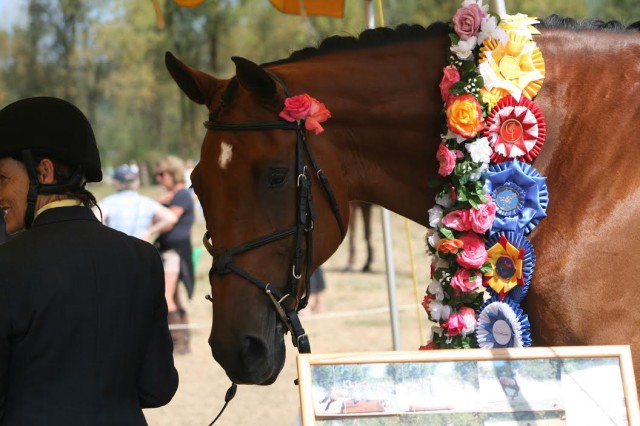 Worth The Wait during his retirement ceremony at Caber Farm. Photo by Maggie Rikard.

What I got in return far exceeded my expectations of what a horse and companion could do for you. He would do anything I asked and he would do it carefully. He took care of both of us so we didn’t get hurt. He never refused to try, even when I asked things he didn’t want to do. Rather than fearing cross-country jumps, he respected them and always looked carefully and jumped with confidence.

He would patiently try to do what I asked in dressage, even though I had no idea what I was doing. His most common comments by the judges were “Lovely horse” and “Horse tries very hard.” I guess that summarizes dressage for a horse that barely fits in the ring!

In 2007, we did more Training competitions followed by Prelims. I knew by that time I had the horse of a lifetime. I was worried I might break him with conditioning required for the Preliminary level, but we both knew that he was well past the Training level. We went on to do a CCI* in Montana. By the end of 2008, we were ranked fifth in the nation in the Master Adult Amatuers. Now what was next?

The next year I decided to try Intermediate. I never dreamed of getting to that level. That was the level where pros had trouble, and I was far from a pro. But now Prelim was easy for both of us and I was caught waving at friends on my Prelim cross-country rounds, so it was time to move up.

We competed Intermediate at 3 Day Ranch in California, which looked doable in the pictures. Little did I know the place was full of steep hills. This was the event where I realized what my horse would do for me. There was a triple bank drop with a chevron on a three stride angle at the bottom.

I got to the bottom of the three drops with one stirrup and no rein contact so I just looked at the triple brushed chevron and he jumped it for me. It was truly amazing to see and ride this hugely talented horse. He just loved his cross-country job! 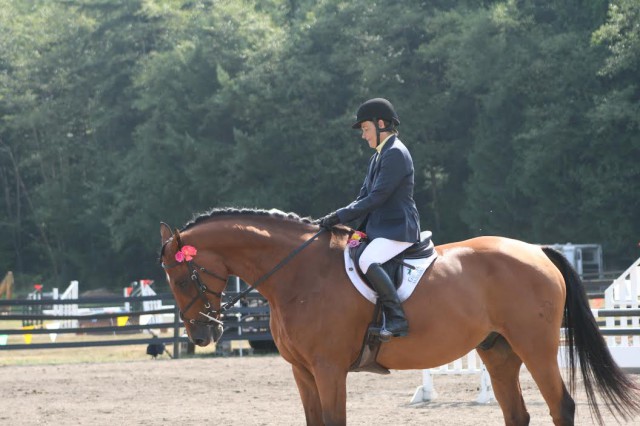 Aimee Witherspoon and Worth The Wait after their final competition together. Photo by Maggie Rikard.

In 2012 I was offered a considerable sum to sell him. I thought about it and then I asked how could I sell my best friend?! He cost me nearly nothing and gave me so much! He deserved to stay in his plush pasture with his happy lifestyle.

He has since competed at Intermediate for six years with occasional Prelims. This January we even drove the 7,000 mile round trip to Ocala, Florida for the winter. He showed up those east coast horses by winning the Preliminary Rider division at the Ocala 3 Day Horse Trials.

For his size–17.2 hands and 1,500 pounds–it is just amazing that he has stayed sound all these years with no injuries even though he was competing at one of the highest levels of eventing. For a horse that flunked his flexions as a six-year-old and had bilateral OCD surgery, it is truly remarkable.

He is a well known fixture in the stabling area as he always has his stall door open since he doesn’t easily fit in the puny 10 foot stall. He also is well known for attending the adult rider parties and hanging out with his head on my shoulder while we drink wine.

He has become quite a character in the stabling and well known for his antics to get attention including his famous neck roll to beg cookies from strangers. He earned the barn name Marshmallow from Lou because he thinks he is a pocket pet and really likes people. He thinks he should be at the party in the chair not in this dumb puck stall.

I was working on a client’s horse once many years ago and I was telling her about my special horse and she told me this wise piece of advice, “If you are lucky enough to have a Horse of a Lifetime come into your life enjoy every minute and cherish him. Other future horses may not measure up and shouldn’t be compared, so just be thankful that you were lucky enough to have this special horse come into your life.” 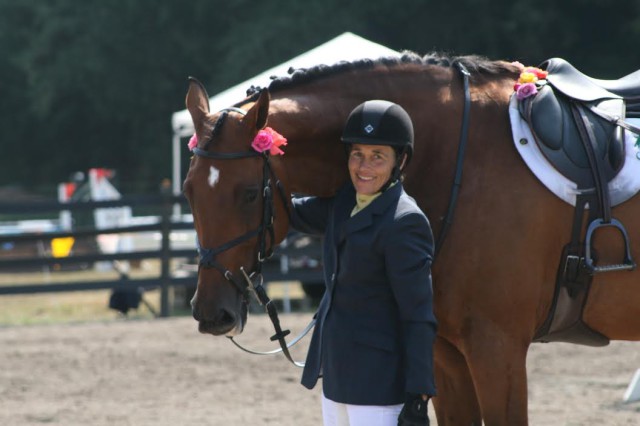 Aimee and Worth The Wait celebrating their partnership together. Photo by Maggie Rikard.

So out of the blue I found a rejected horse that became my horse of a lifetime and my best friend. He will always be honored and cared for in return for all he has done for me. I am so happy, grateful and very lucky that I get to keep him and be a part of his life.

I have been asked why retire a going horse? There is really nothing wrong with him other than old age like me. He is stiffer when we start out and slower to warm up. He doesn’t have quite as much punch in his jumps but with his amazing scope he still makes it look easy.

I know in my heart he would keep jumping those massive jumps for me even if he was hurting, but he deserves better than that. I always promised him that if I could retire him sound I would and the time has come. With 15 years of age, 10 years of eventing and 48 events, he has more than paid his dues, even though I still love every ride I get to have on him.

Now he gets to be the world’s best trail horse, doing occasional clinics and camps to show off his stuff and avoiding the dreaded D (dressage). Mostly, he gets to be a lounge lizard and chase his good buddy, the colt, around the field which he so richly deserves.

I ask you to honor this horse and honor all the horses who try so hard for adult amateurs riders so they can compete in this sport. We may not always give them the best ride but they do their best to take care of us.