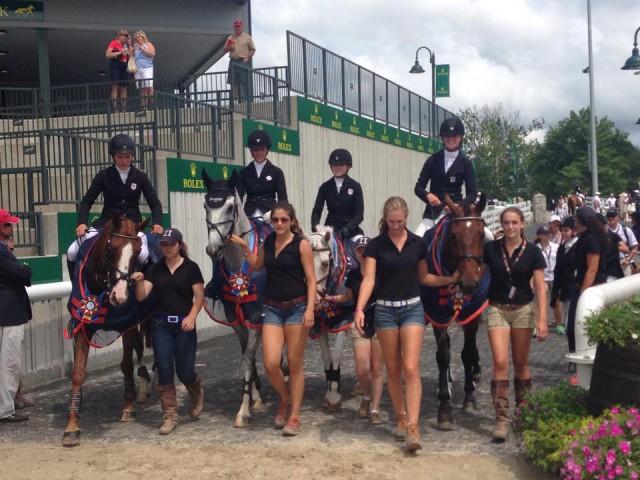 It was all Area II today in the show jumping phase of the CCI* at NAJYRC. Alexis Nelson entered Rolex Stadium sitting in second place individually on her dressage score of 49.4. She and Total Eclipse executed a flawless round, coming home with no jumping and no time faults to add nothing to her score over the weekend.

Sitting in gold position after cross country, Moira de Ste Croix-Laframboise and Blue Ben had two rails down to end their quest in fourth place – still a valiant effort from this pair who had an otherwise lovely round. 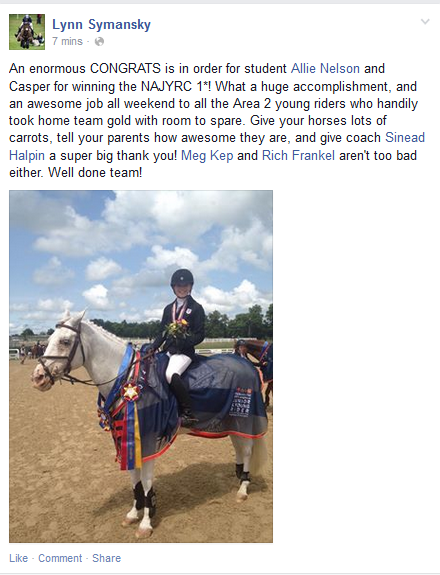 Moira’s rails left Alexis sitting in gold medal position, handily winning the division by 5.6 penalty points and helping clinch Area II’s team gold medal. Thanks to some great riding by Area II riders, the team added just 8 faults to their cumulative score, ending the weekend on a total of 165.9.

Rails fell all throughout the course, which was twisty and challenging in its own right. In all, we saw just nine double clear rounds from the 30 competitors. My internet connection for the live stream was more than a bit spotty, so I unfortunately missed enough of each round to know which fences came down the most, although I did see a lot of the triple elements come down throughout the day. I also apologize for the lack of screen capped photos, as they turned out way too grainy for use.

Clara Cargile and White Indian were able to move from sixth to third after producing a double clear effort. Grace Fulton and Wild Orange clinched a fifth place finish, moving from 25th after dressage to 11th after cross country. Margret Schaeffer and Grey Area delivered one of my favorite rounds of the day, albeit with one rail down, to finish in sixth place.

Area II led after cross country and clinched the gold medal today, improving from their bronze medal in 2013. Area V added no penalties today for silver, and Area VIII added 16 penalties to move from silver into bronze.

The final team standings for the CH-J* are as follows: