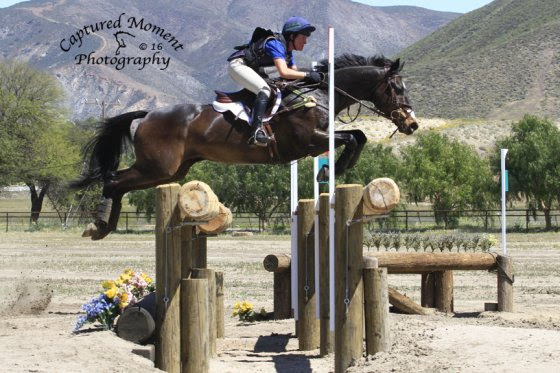 Barb Crabo and Eveready on their way to the CIC3* win. Photo by Captured Moment Photography.

Girl power ruled this weekend at Galway Downs and the end of the weekend crowns Barb Crabo (CIC3*), Frankie Thieriot-Stutes (CIC2*) and Jennifer Wooten-Macouzet (CIC1*) winners in the FEI divisions.

Barb Crabo and her veteran partner, Eveready, had one of the quicker times across country to swoop up and take the win on a final score of 57.0. Overnight leaders Mackenna Shea and Landioso were also clear on cross country but just a shade slower for second place overall. Both Barb and Mackenna are heading to Rolex later on this month, along with several other pairs in this division.

“With my other horses I get a little nervous, but Ready and I know each other so well, it is just a lot of fun to leave the box on him,” Barb said in the press conference following cross country. “He was so great today and I was thrilled with how the course rode.”

Andrea Baxter and Indy 500 were the only pair to make the time on cross country, moving them from fifth into third overall.

In the CIC2* it was Frankie Thieriot-Stutes and The Chatwin Group’s Chatwin who led from start to finish on their dressage score of 40.0. Frankie just took over the ride on Chatwin, who had been with Tamie Smith for the latter part of 2015 while Frankie had her first baby. This weekend marks their third event back together and their second win.

Frankie said in the press conference that she thought Ian Stark’s course was, “a great galloping course, with several good questions,” and that Chatwin, “answered every question asked of him and that it was so much fun to ride.”

Jennifer Wooten-Macouzet and Jordan Horwitz’sBallingowan Ginger also led wire to wire in the CIC1*, adding 1.6 time penalties to their dressage score for a final of 43.9. This is a new partnership and the second event for this pair — they previously finished fourth in the CIC1* at Fresno.

“It was great to be back out there again with a mare that is so much fun to ride,” Jennifer said. “I think we both appreciate one another’s experience and it has been very fun getting to ride such a talented mare.”

Please enjoy this great coverage from the weekend, courtesy of our friends at Ride On Video: