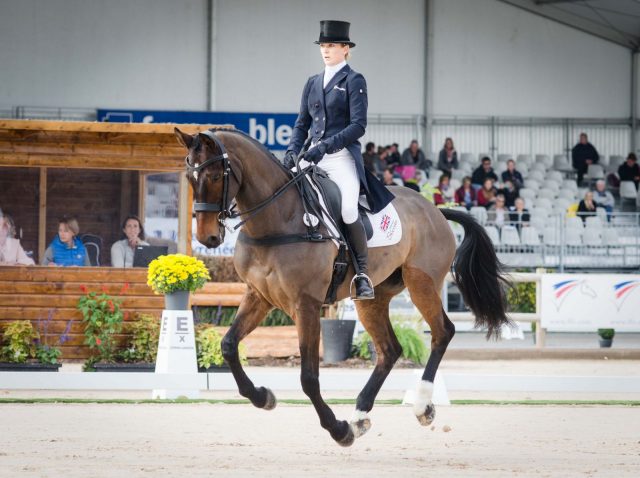 In the eventing world’s equivalent of the draft season (that is, the off season, in which riders may actually find a few minutes spare to rethink and restructure their brand and business), big changes are often afoot. Prominent horses switch hands, sponsorship deals are made and ended, and, occasionally, a big-name rider makes the decision to fly a new flag. This is rarely a decision that’s made lightly — often, a change of nationality can have an enormously positive impact on a rider’s future chances of team selection or funding. Often, too, the decision comes down to an innate feeling of identity and belonging.

Lissa Green, daughter of bonafide British eventing legend Lucinda and Australian Olympic eventer David Green, has always had the option of competing under either flag, but as her business is based in the United Kingdom, so too has her choice of nationality been.

“With my upbringing, I have often found myself waving an Australian flag with one hand and a British one with the other,” she wrote in a statement released on Instagram Wednesday evening. “I was born in Britain so it felt natural to be a part of the British system, something I have always admired and been extremely grateful for.” 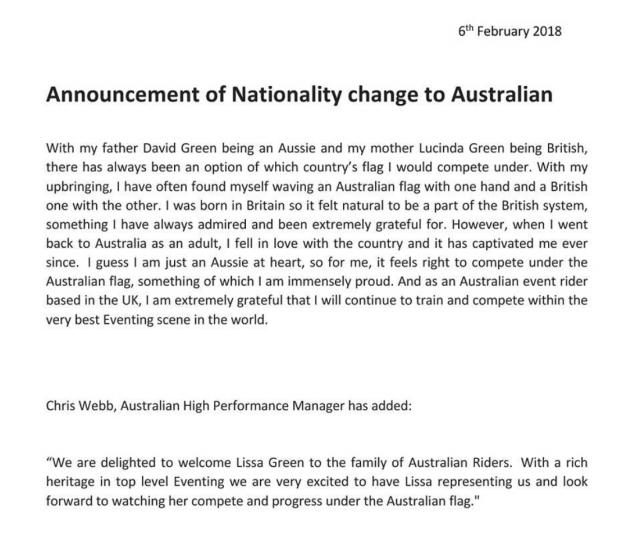 Lissa, who made the move to four-star in 2017 at Badminton with the small but mighty Malin Head Clover, says that the decision to make the switch wasn’t driven by any one catalyst, but rather, is the culmination of a multitude of factors and input from her expansive support team.

“It’s definitely something I’ve thought about for a while,” she explains. “It seemed like an appropriate time. Over the last few years I’ve been fortunate enough to build a strong team of very promising horses, exciting sponsors, and loyal owners. Having my first attempts at four-star — and LOVING it! — when competing at Badminton and Pau in 2017; all of these factors combined helped with a decision that helps me look forward as my career develops.”

A winter break in Australia, where her father, David, works as a prominent coach, furthered an idea that had been in its infancy.

“I think my father has always secretly wanted this to happen, so I’m sure he was the subconscious initiator back in the day! Although I would have thought about it myself with how fond I grew of the place. I do adore that country — there is something wonderfully special about it, and I said a long time ago that I would, hands down, live there if it wasn’t for my gorgeous horses and career back here in the UK.”

Further support, and welcome advice, came from Australian team stalwart Sam Griffiths, who is one of the lynchpins of a strong Aussie contingent based in the United Kingdom.

“I turned to Sam for advice and we had a great conversation over a pint this winter,” says Lissa. “He’s a perfect representative for Australia, and he really showed the camaraderie the athletes have between each other, and how professional their focus is towards the future.” 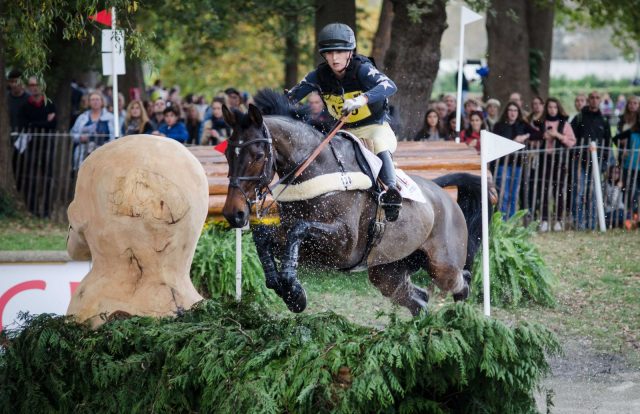 Despite the big change, Lissa will be able to continue running her business as usual, and has her sights set on Badminton, this time with Pau mount Hollyfield II. Although the pair didn’t complete the tricky course — a brakes issue at the end of the course led Lissa to make the decision to retire — Hollyfield is an exciting horse for the future. Remarkably, despite the notoriously twisty track and its difficult time, the pair were the fastest round of the day by nine seconds before their retirement, giving Lissa — and her adopted eventing federation — plenty to look forward to.

“I’m really excited about him. It’s no secret he was a risk when we bought him, and I’ve spent over two years undoing and changing him with the help of my amazing trainers, to turn him into a solid and rideable horse. This past month, he finally feels like a horse I can now build with — he feels totally different this season, which is something we always dreamed would happen, but you can never be sure when you’re on a fix-up job. I’m so excited — I really believe he’s far from the height of his potential.”