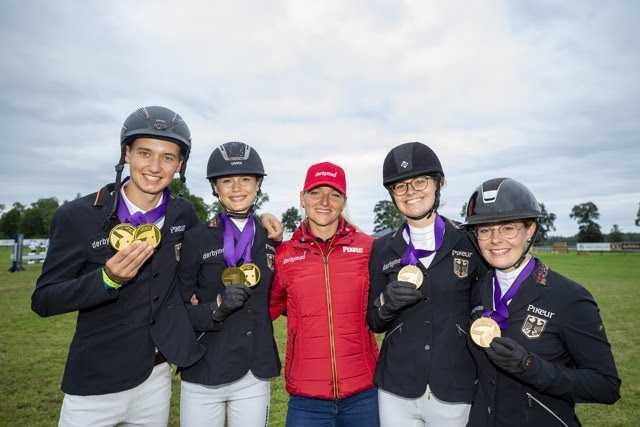 German athletes were unstoppable for gold when clinching the team and individual titles in both categories at the FEI Eventing European Championships for Juniors and Young Riders 2021 in Segersjö, Sweden yesterday.

The venue, originally a royal estate that now belongs to the ninth generation of the Montgomery-Cederhielm family, provided the perfect backdrop to a brilliant weekend of sport in which Spain and Ireland took Junior and Young Rider team silver respectively while Italy took double team bronze.

And the closing stages of both competitions was nail-biting to the very end.

A total of 67 competitors lined out before the judging panel of Seppo Laine (FIN), Laure Eslan (FRA) and Tim Downes (GBR) in the Junior dressage phase in which Germany established the advantage when Viktoria Weyers and Lariostea H posted a brilliant 22.2 for the leading score ahead of team-mate Nane Nikolaus Dehn and Zilia D who put 23.6 on the board.

On a mark of 27.7, French team member Lisa Gualtieri (A d’Aunis) was lying third while Spain’s Marçal Piro Patau (Kira HDB 20 88) was next in line on 28.0. In the team rankings Germany had the clear lead ahead of France in silver medal position, Ireland in third and Poland in fourth going into yesterday’s cross-country phase which proved very influential.

The 21-fence course, designed by Great Britain’s Eric Winters, saw 13 of the 67 starters eliminated and riders racking up a total of 31 refusals. However 35 horse/athlete combinations came home without fence penalties and 17 were clear within the time of 7 minutes 05 seconds. The bogey fence of the day was the combination at fence 11 where a total of 17 refusals were recorded, and amongst them was one for the German team anchor partnership of Sophia Rossel with Exclusive.

It proved no problem at all for the two leading Germans however, and when Gualtieri missed a flag at fence 19 to drop down the leaderboard then individual competitor Nicoletta Massmann bolstered the German position even further when moving into third after a great tour of the track with Painters Igor. 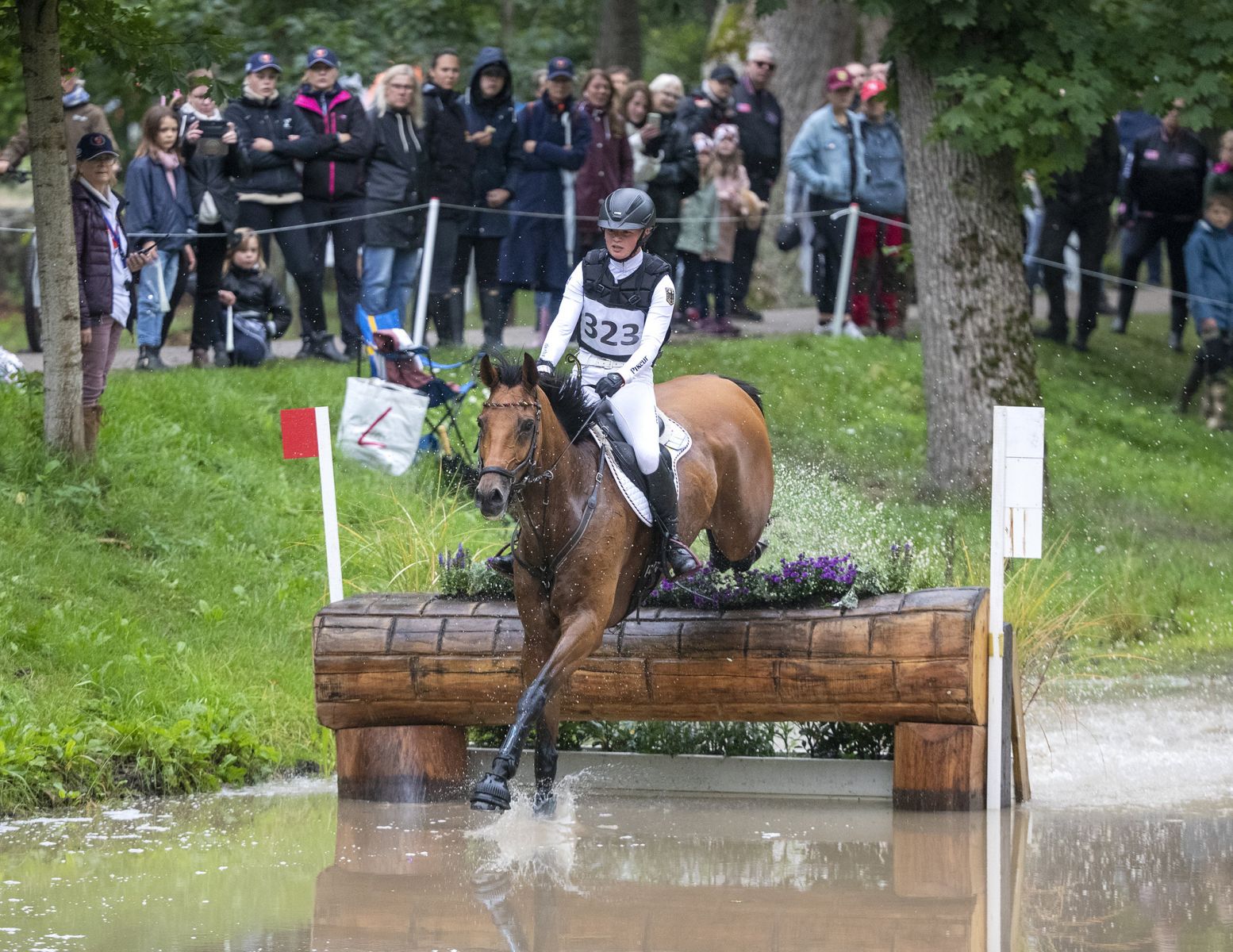 Four of the top five individuals were flying the German flag as jumping began, because team-member Kaya Thomsen (Da Bin Ich C) moved up from tenth after dressage to fifth after cross-country and was lying just 0.4 penalties behind Piro Patau. As the final stage played out less than two fences separated the top 10, and there was less than a fence between the top two.

Fifth-last to go, Thomsen kept a clean sheet to stay on her dressage score of 30.0 and then fourth-placed Piro Patau followed suit to hold on to his running total of 29.6. But, first of the final three, Massmann had two down to slip out of contention.

Dehn’s single error when the penultimate rider into the ring seemed to suggest he would scoop the silver with 29.2 now on the board. But, last to go, Weyers double-faulted and her final total of 30.2 left her an agonising 0.2 behind team-mate Thomsen who bagged the bronze, while Piro Patau stood on the second step of the podium and 17-year-old Dehn was crowned the 2021 FEI Eventing European Junior champion. 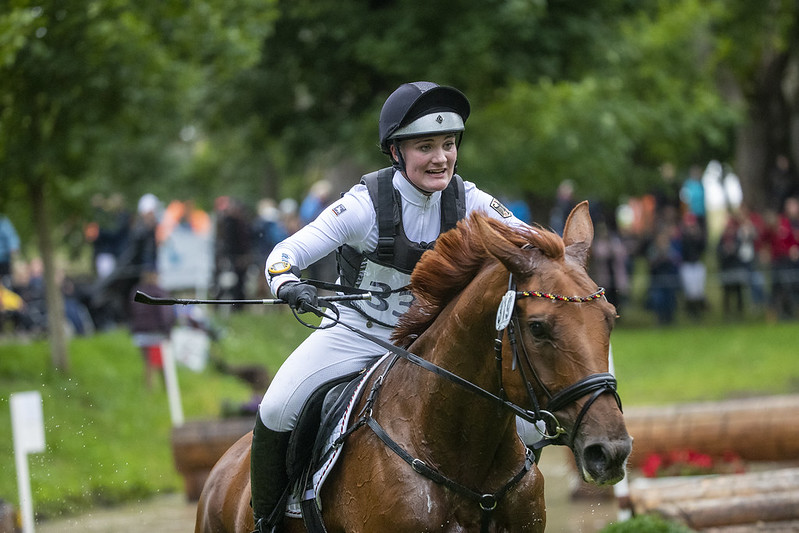 A total of 41 contenders rode their dressage tests before judges Anne-Mette Binder (DEN), Dr. Joachim Dimmek (GER) and Joanne Jarden (IRL) in the Young Riders category in which Team Germany once again established the lead from the outset.

Anna Lena Schaaf and Fairytale 39 posted the best score of 21.5, and when team-mates Greta Busacker and Scrabble OLD slotted into third with 24.1, Libussa Lubbeke and Darcy F filled fourth with 28.3 and Alina Dibowski and Barbados 26 slotted into sixth, then the German running score was 73.9 going into the second phase.

However Team France were close behind on 84.4, boosted by Anouk Canteloup’s mark of 23.8 with Daniel del Impermeable which left this pair in overnight second. The three-strong Belgian side held third on 96.2 ahead of The Netherlands in fourth on 96.6, but cross-country day would bring changes.

An impressive 20 horse/athlete combinations jumped clear over the solid timber and five made it home inside the time of 8 minutes, with two retirements, nine eliminations and 16 refusals around the 24-fence track.

Dibowski scorched home in 7 minutes 53 seconds to move up three places to third at end of the day, behind Canteloup and Schaaf who held on to the leading two spots when adding just 4.0 and 1.6 time penalties respectively. Busacker’s 5.2 time penalties dropped her one place to fourth ahead of Zazie Gardeau (Udine Jolimon Beam) and Julie Simonet (Sursumcord’Or) in fifth and sixth for France.

The team leaderboard showed Germany still out in front and France in silver medal spot after yesterday’s cross-country, but Belgian chances were dashed when Seppe Vilain (Lamparo V) missed fence 16 and Jarno Verwimp’s Mahalia had a fall at fence 20. And the French had no luck either.

Chiara Autin and Urban Legend Blues had been eliminated for three cross-country refusals so when Gardeau’s Udine Jolimon Beam was withdrawn before this morning’s second Horse Inspection and Canteloup’s Daniel del Impermeable wasn’t accepted, then their chances were also gone.

So it was Ireland’s Jim Tyrrell (Rock Gift), Alannah Kelly (Cooley Bounce) and brother and sister Brian (Tullibards Now or Never) and Jennifer Kuehnle (Polly Blue Eyes) who were lying in silver medal spot as the final action got underway today. The departure of the French saw Italy’s Matilde Piovani (Born West), Leonardo Maria Fraticelli (Belamie DHI), Carolina Silvestri (Dutchdaleo Z) and Maria de Angelis Corvi (Bungowla Diamond Time) move from fourth up into bronze, and, like the Irish, they held firm in the final analysis.

A total of 28 lined out over the showjumping course set by Sweden’s Lars Erik Jakobsson, but only four managed to keep a completely clean sheet. It looked like it might be an all-German individual podium with Schaaf, Dibowski and Busacker holding the top three places ahead of the sole remaining French team member, Simonet, sitting in fourth place as the action resumed for the final time.

Adding four faults to her score of 31.2, the French rider then had to sit back and watch the final three take their turn and when Busacker went clear then all the pressure was piled onto the remaining two. Dibowski had no room for error with only a 0.3 advantage over Busacker, but with three fences down her medal hopes were gone. So when, last to go, Schaaf left two on the floor then she would drop to silver medal spot and it would be Busacker who would grab the gold with Simonet taking bronze.