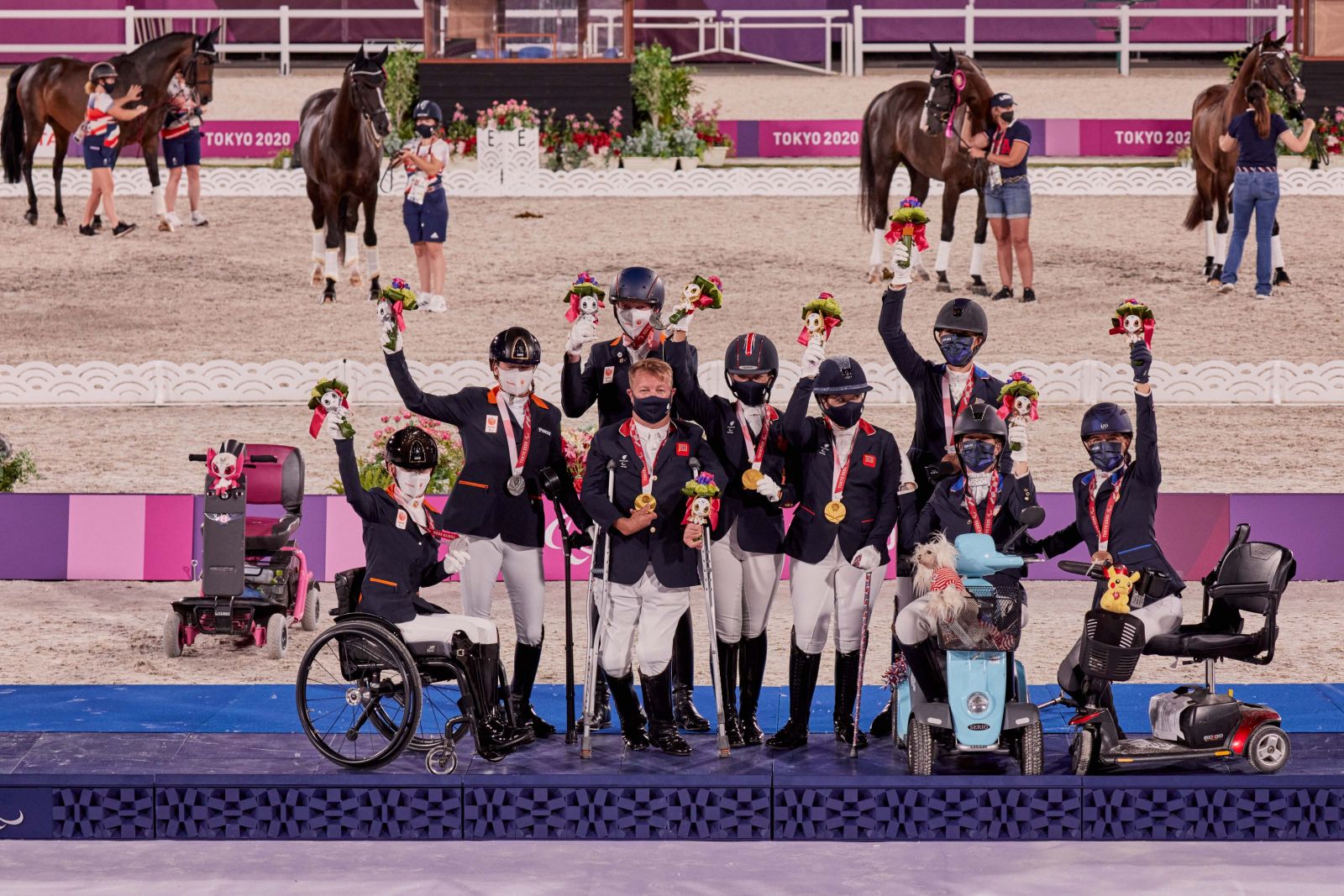 Suspense and pure grit were on display tonight as Great Britain claimed the Tokyo 2020 Para Dressage Team gold medal, continuing their seemingly unbreakable hold on the title which started in Atlanta 1996. The trio of Sir Lee Pearson (Grade II), Natasha Baker (Grade III) and Sophie Wells (Grade V) scored 229.905 to finish just 0.656 ahead of The Netherlands’ 229.249. And in another momentous shift in the sport, USA took the bronze medal with 224.352, making this their first Paralympic Team podium finish, and the first time the podium hasn’t been made up of all European teams!

There are three athletes per team. Each Grade competes separately in its own Team Test, with each horse and athlete combination performing a series of pre-determined movements, which differ by Grade. The combined results of each of the teams’ three athletes determine the overall score and the team with the most points wins gold. The competition was run over two days, starting with the athletes from Grades I, II and III performing on Saturday, leaving Grades IV and V to seal the deal today.

Here’s how the day unfolded

At the beginning of the day, the competition was shaping up to be a showdown between the three podium winners, with Great Britain having the slight advantage over the USA, with both countries having two tests already completed. 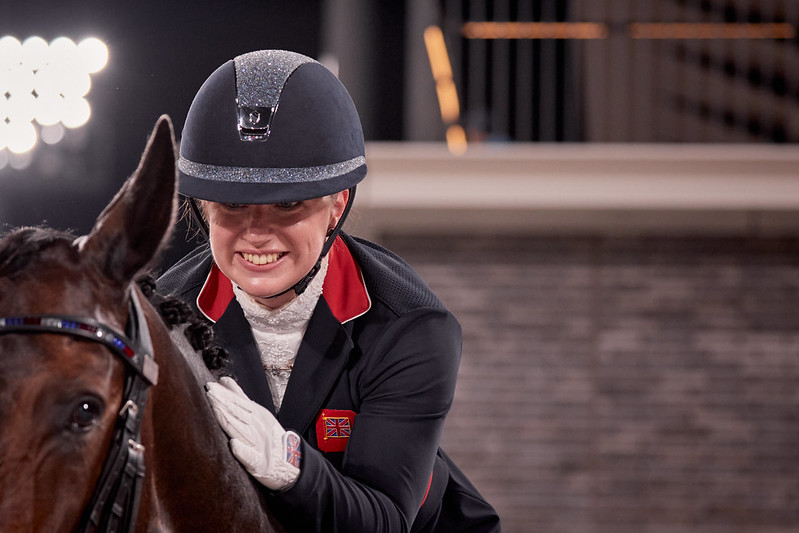 The Grade V Team test was won by Belgium’s Michele George on Best of 8. She scored 77.047% to put her country into medal contention too.

A crucial score of 75.651% for Sophie Wells (GBR) proved to be a massive boost for her country’s chances of winning, while Frank Hosmar (GBR) on Alphaville N.O.P. posted 74.814% to keep things neck and neck between the two countries.

At the start of the Grade IV Team Test, the British had completed all their rides, leaving the USA and The Netherlands with the knowledge of how much their last two athletes would have to score to beat them.

First up was Kate Shoemaker (USA) on Solitaer 40. She scored 71.825% to put the USA in silver medal position.

Sanne Voets then entered the arena on Demantur N.O.P. and knew she needed to score 78.136% to beat Great Britain. Four minutes later she left, and her score was announced, a massive personal best of 78.200%. However, between the calculation of what was needed to win, and Sanne’s test, Sophie Wells’ score was confirmed slightly higher than the provisional score given earlier, thus handing Great Britain the closest of wins. It could not have been any closer, it could not have been more historic.

Speaking after their medal ceremony, Natasha Baker tried to sum up how the team felt. “I don’t think any of us expected that in a million, trillion, gazillion years to be honest. We’re all so immensely proud of everything our horses have done in the last few days.”

“We had no expectation that we could achieve that” Sophie Wells added. “We genuinely thought it was impossible in the most realistic way. We all had horses that have never done this or been against anyone else. The Dutch are so strong and secure on their horses and we’re not.” 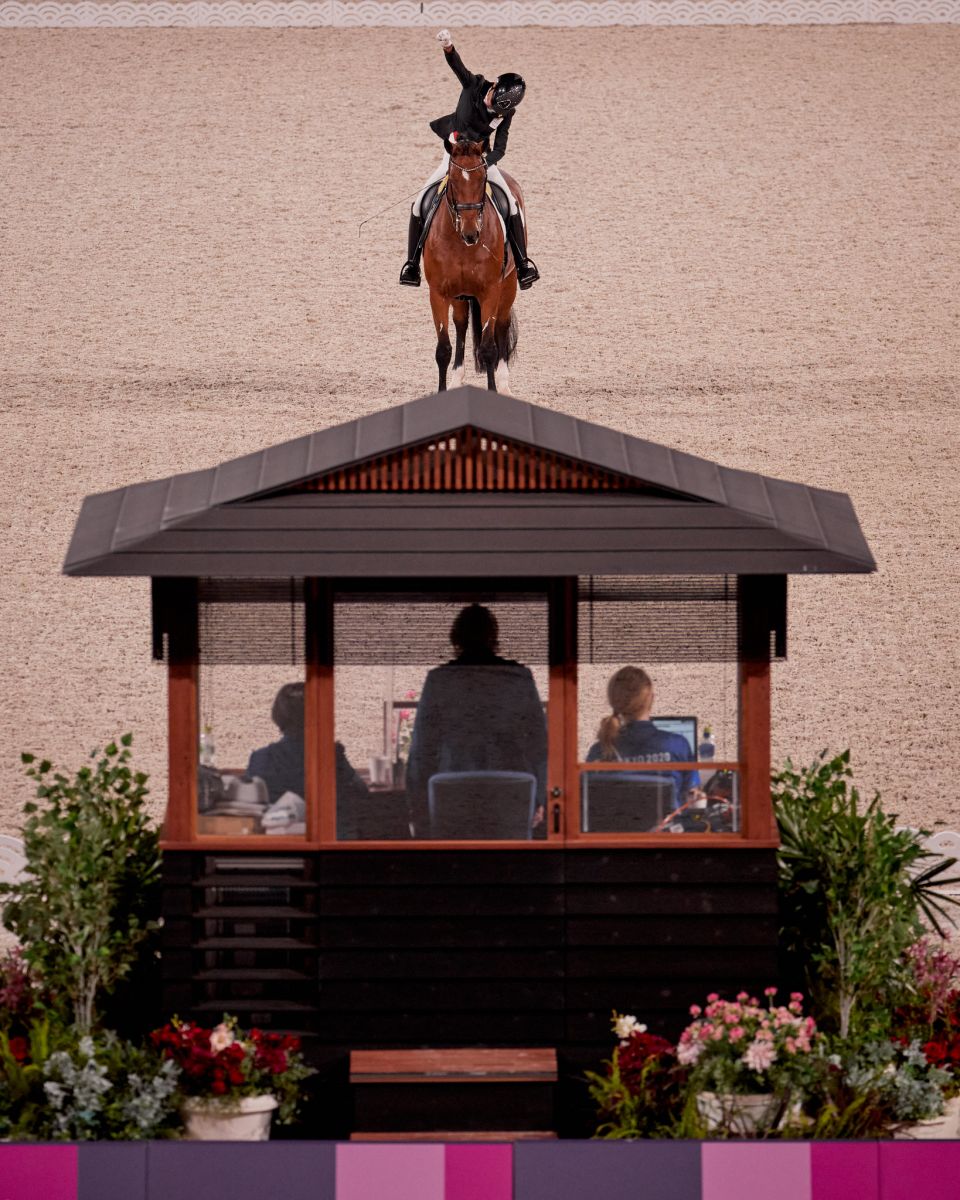 “We haven’t even got any championship horses on this team,” said Lee Pearson.

Team Leader Georgia Sharples paid tribute to the team saying: “I just think these guys are undefeated Paralympic champions but in a whole new context. You’ve heard about the inexperienced horsepower, but never underestimate these guys and what a job they did out there on that field of play.”

The Netherlands were equally enthused by their silver, and the closeness of the competition.

“We’ve been working towards this for five years,” said Sanne Voets, “and this is where you want to perform at your best and, if you can succeed at that you can’t be disappointed.

“There was so much pressure. When we saw the order to go and I realised I was the last rider of the three countries who were expected to win I knew I would know the score needed for team gold.”

And despite coming into the Games as hot favourites for the title, there was delight and relief with bronze for the USA as well, especially Rebecca Hart, who has competed at four Games now.

“I don’t have words right now, she said. It was such an amazing competition and so close. A real nail-biter to the very end. I am so incredibly blessed and happy to be standing here with these two amazing riders. To finally, after so many years, be able to stand on that podium as a country, it’s a lifelong dream come true.”

After the drama of the Team competition, the Para Dressage competition at Tokyo 2020 comes to an end tomorrow, when the top eight individual riders in each Grade take to the arena to dance in the ever-popular Freestyle competition. The five medals will come thick and fast in what will doubtless be another fascinating, exciting and potentially historic end to a brilliant Paralympic Games for Para Dressage.