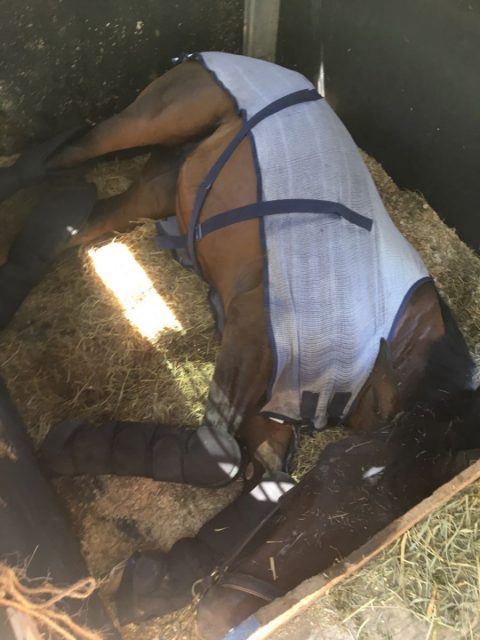 Today I was reminded, in dramatic fashion, of how grateful I am to be part of the horse community. We all know that the horses are our first love, but there is something particularly unique about the connection that exists between horse people. Regardless of discipline, level of experience, or opinion; when the sh** hits the fan you hope the one who has your back is another horseman. My greatest fear has always been a trailering accident, and for over 20 years (loud knocking on wood here), I was lucky enough to not endure so much as a flat tire. I’ve hauled mares and young foals, green scaredy-cat horses, tiny ponies determined to slip under the butt bars, and full-blown colics while white-knuckle navigating dark country roads to the emergency clinic.

Recently, I stopped at a friend’s barn to pick her and her mare up for company on the hour-long drive to our trainer’s facility. The girls had been in the trailer together a week ago with no drama, so we went ahead to load up. Even when my fussy Alice attempted to kick out at the mare being loaded onto the trailer, I thought we’d be lesson-bound in no time. Amid a squeal, I cluck-clucked for her to behave herself but quickly realized she wasn’t simply kicking with her back leg. Alice managed to get all four hooves jammed up against the outside wall of my two-horse straight load trailer. The center divider was bearing the brunt of her weight with her withers and back wedged against it. Imagine a cast horse propped sideways. She panicked; she would spend about a minute furiously paddling against the wall, the trailer violently rocking, and then would lay prone for up to 10 minutes at this impossible angle. Her eyes were rolling, her nostrils flaring, imploring me to make things right. 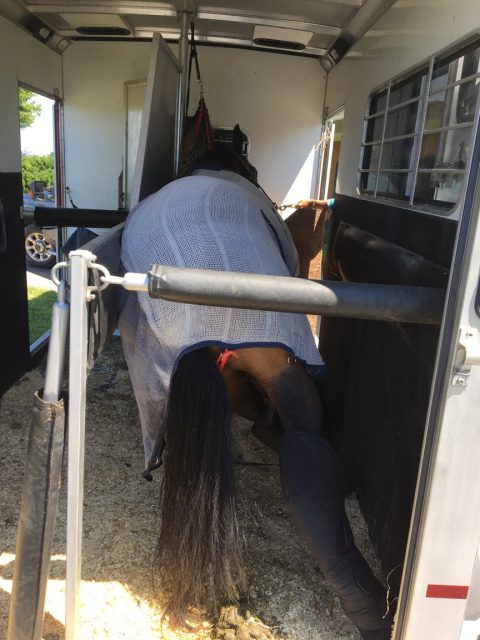 So here we were: my worst nightmare happening on a beautiful, breezy Virginia afternoon when instead we should have been merrily trailering along as my friend and I discussed our upcoming lessons on our awesome horses. But my Alice was stuck, and she couldn’t figure out how to get her legs underneath of her. Here’s the amazing part, the good news of it all; everyone in the barn— professional four-star eventers, working students, the barn manager, boarders — dropped what they were doing and ran out to help. Not one of us had ever encountered such a situation before. Though we all remained pretty calm and sane, we didn’t exactly know what to do to get Alice un-stuck.

Do we leave the ramp down and drop the butt bar, allowing the divider to swing open? What’s going to happen when she falls? Do we administer a sedative to reduce the panic? Should we try to shift her weight with ropes? What if her legs start flying again? Is everybody safe? Are her legs all still attached at the correct angles? Is she bleeding from anywhere? We administered 0.5cc Ace I.V to help her relax and then for an agonizing 35 minutes considered our options. While there was some consensus to open the divider with the ramp and back windows of the trailer closed, the pin in the bar was jammed from her weight and trying to work it out would have put someone dangerously close to her hind end. It may be easy after the fact to armchair quarterback but believe me in those moments it’s not so clear cut.

As I was talking to my vet, Stephen Bradley and Melissa Hunsberger were efficiently reaching in and across Alice to lift the divider and center poles out of the trailer. These are heavy metal trailer sections that my husband and I struggle to wrangle on a good day. How Stephen and Melissa were able to so gracefully and quietly remove them is beyond me. Once the center pole with the stud guard was removed, Alice was able to stretch out on the trailer floor. Groaning, eyes still rolling, she was totally still. While it was worrisome that she wasn’t immediately standing, we chalked it up to effective sedation and let her have some time to recuperate. After about another 30 minutes, without any additional drama; Alice just stood up. Once again, folks were right there making sure that all was safe as we quietly dropped the ramp to unload her. Sweaty and shellshocked, Alice backed off the ramp like the pro she (usually) is. The damage appears to be cosmetic and emotional. The emotional part, mostly me. 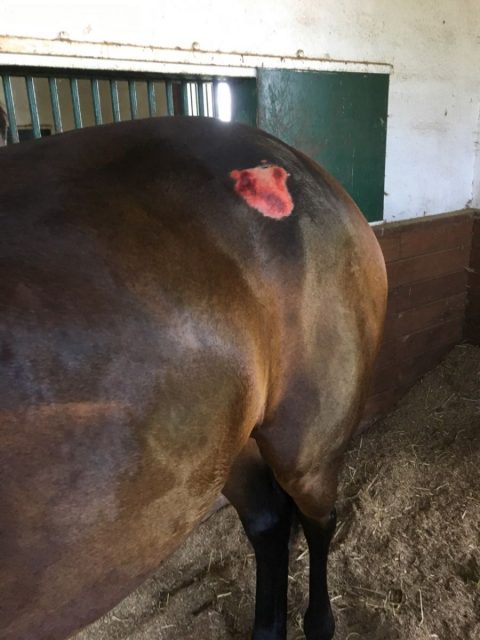 For the team at the barn, life was back to normal five minutes after my mare was off the trailer. Stephen, Melissa, Erika, and Rachel quietly disappeared, back to the work at hand — just another day at the office. The rest of us had a few hugs, told some stories, and debated the merits of shipping boots versus wraps. We didn’t say it, but we all knew that the story could have had a vastly different ending. As my vet said, it’s only surprising that this kind of thing doesn’t happen more often. I still don’t know what I might do differently if faced with the same situation again – but as one person kindly said to me — you did what was right in each moment as best as you could. That little remark meant the world to me.

What I do know for certain is that the collective horsemanship energy of amazingly kind people, who didn’t even know me, helped me navigate through one of the most agonizing hours of my horse’s life (and mine). My mare will be here another day to demonstrate the beauty and difficulty of all things mare-ish because of the compassion of others, and their generosity to give up precious time for the well-being of a horse. That’s the best of the horse world and it’s the kind of thing that happens every day in horse sports, without much fanfare, but today, for me and Alice – it’s all that matters.