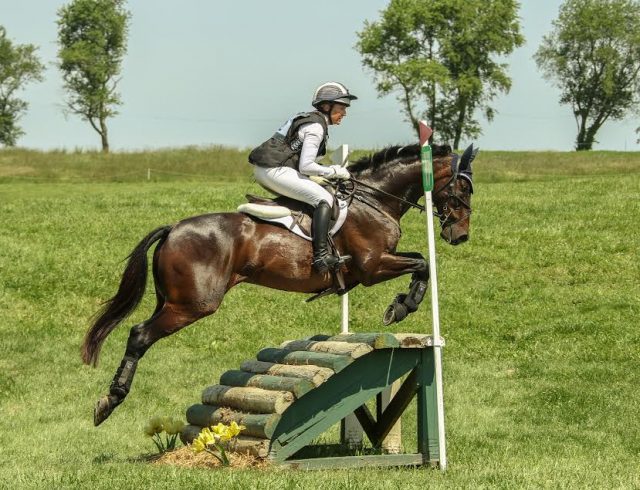 It’s been just three months since Allie Knowles suffered a rotational fall while contesting the CIC2* at Red Hills International. On cross country, she and FE Crosby experienced one of an eventer’s worst nightmares, and Allie found herself in the hospital with multiple injuries to the right side of her body.

A shattered pelvis, broken ribs and a broken collarbone were on the laundry list of injuries, and while the damage could have been more devastating, Allie’s hopes of competing at Rolex the next month were dashed. FE Crosby was uninjured in the fall.

Anyone who knows Allie knows that she’s a tough one. That toughness was truly put to the test as Allie underwent two surgeries to repair her collarbone and pelvis and began the grueling road to recovery back in her home town of Lexington, Kentucky.

The long and winding road

Two weeks post-fall, Allie found herself back at home and limited in what activities she could comfortably do. The owners of Allie’s home base farm, Valley View Farm, stepped in generously to help provide Allie with what she needed to recover. Jim and Katie O’Brien were quick to recognize that getting up the stairs to Allie’s apartment would not be something she could do, so she offered to let her and her roommate Abby Shanahan move into their house during the rehab process.

“What really made all of this possible was everyone else around me,” Allie said. “I had to persevere and be tough on myself, but I have never felt so loved and cared about. The O’Briens were just amazing, and I can’t fully express my gratitude. They let me, my roommate and my dogs move in, had a walker and a medical bed waiting for me, and basically just made sure I had what I needed as soon as I was out of the hospital.” 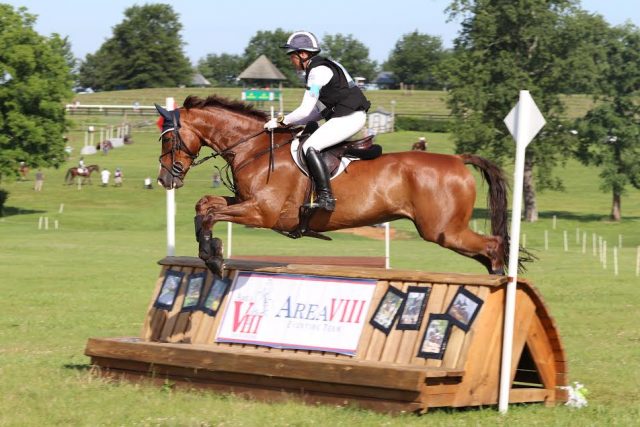 Out and about at Midsouth Pony Club HT this weekend. Photo by Samantha Clark.

Once settled, Allie began the slow recovery process, staying put indoors for about a week before she went stir crazy and had to do something to switch up the routine. Three weeks post-fall, Allie was up and using her walker to get around and slowly began returning to the barn to teach a couple of lessons here and there. She knew that in order to make up for the weeks spent not riding, she needed to make some goals to keep her mental focus in shape.

“I made it a goal to start riding again the week after Rolex, which would be six weeks after the fall,” Allie said. “By the time that Monday came around, I was able to get clearance from the doctors, who weren’t quite sure exactly how I was healing so quickly but were okay with my riding as long as it wasn’t jumping.”

“We eventers are quite obsessed and driven, and having our purpose taken away so quickly is an enormous challenge,” she continued. “It’s impossible not to feel like you’re falling behind. I Started going back to the gym as soon as I could — my personal trainer did a lot of research on my injury and really helped me with the rehab. And everything we do for our horses — Magnawave therapy, massage, RevitaVet — was used on me too. I had to do something to feel like I was moving towards the end goal.”

The old adage is that horse people typically don’t take as good of care of themselves as they do their horses, and Allie used to be one of those people. Her fall and subsequent recovery changed this outlook, though. “I figured if we do all of this for our horses, my horse is only going to go as well as I can ride,” Allie said. “So if I didn’t rehab correctly and straight, then my horses were going to be just as crooked so for the first time it was really important to me to take care of myself.” 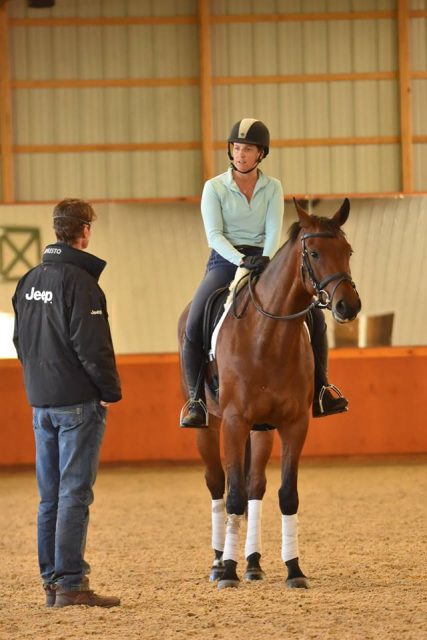 And soon enough, the Monday after Rolex dawned and it was time for Allie to realize her first post-fall goal of riding. “I had stopped taking my pain medication because I wanted to make sure I was fully present,” Allie said. “I didn’t want people worrying that I wasn’t all there around the horses! That was tough, but I was able to make it work with Advil.”

Allie started with Sound Prospect, her upper level partner whom she knows like the back of her hand. The ride went well, and she was thrilled to have reached her goal. “I made it a goal that I was going to be back competing in June,” Allie said.

Two days after her first ride, William Fox-Pitt came to the O’Briens’ farm for a clinic, which Allie had originally signed up for and then withdrawn from. She didn’t entertain the thought of riding with William until she’d picked him up from the airport and he asked how her recovery was going.

“He kind of asked if I’d been riding, and I told him I’d ridden on Monday and Tuesday,” Allie said. “When I told him that it went well, he said, ‘Well, you could probably do a lesson then, right?'”

Allie carefully selected the horse she’d take a flat lesson on, not wanting to jar her body too much. She chose Ms Poppins, a lovely 6-year-old mare owned by the O’Brien family, who was a smoother ride for a dressage lesson. Allie left the lesson feeling no worse for the wear and mentally reinvigorated to continue her journey.

Shortly thereafter, Allie packed up and headed East for some lessons with longtime coach Buck Davidson, who had also stepped up the plate to help coach her students while she was out of commission. Allie had entered her first event post-fall, Plantation Field, and wanted to get a tune-up before heading back out of the start box.

Two weeks ago, Allie left the start box for the first time since Red Hills aboard Sound Prospect. Together, they stormed around the Open Preliminary to finish on their dressage score in second position — a triumphant return for Allie, whose dedication to her goals kept her going through the ongoing recovery process.

“I wasn’t so much nervous about getting back on, but there have been a few times where I’m very aware of the fact that I do not want to fall off,” Allie said. “And that can be dangerous because it can make you ride scared, and there isn’t anything more dangerous than that. I think I took all of the horses cross country twice, just repeating exercises and getting my confidence. I think it was important to stay within my comfort zone because I knew I could do it well.”

“I have always struggled with my own bravery; I am not the most fearless rider,” she said. “I have had to train myself to be brave and trust my horses and to keep kicking on cross country. I have been working over the last few years on becoming a more efficient and confident cross country rider, and I was able to apply that training when I was coming back into it.”

Now that she is well on her way to a full recovery, Allie competed several horses at Midsouth this weekend in her home base of Lexington — and we’re thrilled to report that she picked up two wins, and two second place finishes across the Preliminary and Training divisions. Not a bad weekend at the office! 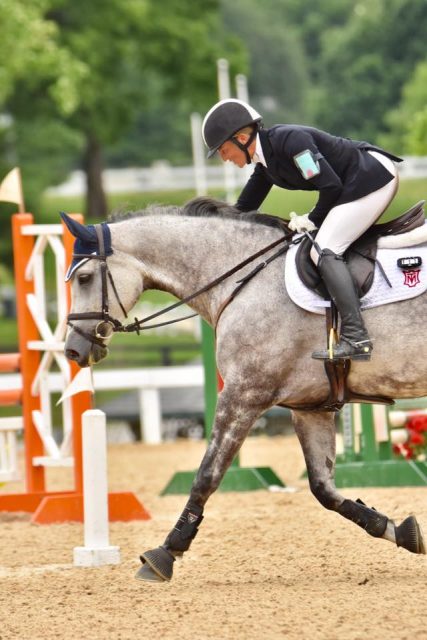 Happily back in the saddle at Midsouth. Photo by JJ Sillman.

Allie is quick to thank all of those around her who supported her through her recovery. She names the O’Briens, Buck Davidson, the Sound Prospect syndicate owners: Jeanne Gauchat, Kathleen Sullivan, Andrew Clark, Christie Campbell, and Katie, Jim and Madeline O’Brien, her working students Nicole Aden and Macy Clark, her roommate Abby Shanahan, and her parents and sister, Chris Knowles, Christie Campbell and Victoria Knowles.

“I don’t even remember how my horses got home from Florida, but I knew my girls would take care of everything and do it well,” Allie said. “My owners were so kind and never pressured me to do anything. They enjoyed watching my girls ride the horses, and I never felt rushed. My family spent a lot of time flying back and forth between surgeries and my roommate, Abby, did everything from cooking to driving me around. With all of these people I never felt alone.”

A lot of the mental coaching coming back from the fall came from Buck, who had stepped in to teach her students who were on the East Coast competing and instructed them to just pay Allie for their lessons with him. “He was phenomenal, not just with pushing me physically but also helping my mental game,” Allie said. “He is really good at getting inside my head and pumping me up. He has been invaluable for my mental state during this process.”

Now, Allie is looking ahead to Great Meadow with Sound Prospect as her return to the Advanced level. She’s also riding the horse she fell with, FE Crosby, and is looking forward to getting back out there with him. “He’s feeling great and confident,” she said.

In a true story of resilience, Allie has proven that the odds can be beat, even if they are not in your favor. Eventers are perhaps among the toughest of athletes, but the most difficult challenge can often come in the form of a mental battle. At the end of the day, Allie has beat down even the most vocal of her mental demons, and she’s stronger than ever as she continues to work toward each and every goal.