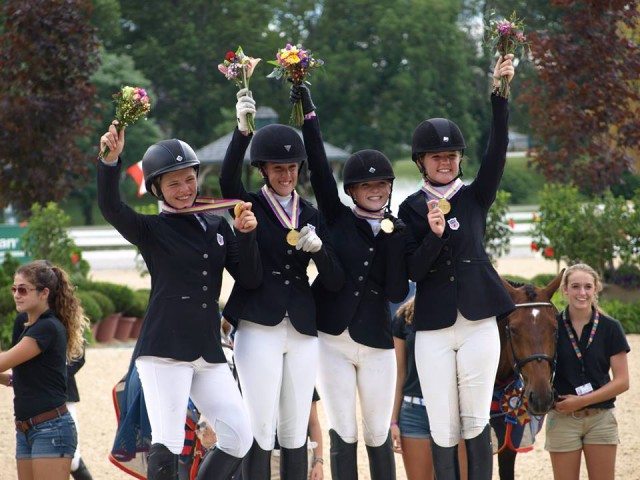 Everyone loves a Cinderella story, and Allie Nelson’s rags-to-riches tale of how she ultimately won an individual CH-J* gold medal at the North American Junior and Young Rider Championships in Lexington, Ky., this past weekend is a pretty good one.

She started riding like many of us did — at a local hunter/jumper barn at the ripe age of 7. “I also saw people do eventing, and I thought it was the coolest thing,” Allie said. “I really like a challenge, and I’m very competitive and determined, so I really wanted to try eventing.”

With the help of her mom, JoAnn, Allie bought her first pony for $500 from an auction. “He was badly abused, so we rescued him, and I broke him,” Allie said. “We did jumpers, and then I decided to switch to eventing. We evented Beginner Novice together, and he was not a dressage pony at all, but he could jump the moon.”

When it came time to move on to a new horse, Allie, then 11, found another unlikely prospect in Total Eclipse, then a 4-year-old, 15.1-hand unbroke Appaloosa gelding her barn had taken in as a rescue case from a local western farm. “They didn’t want him because he had such a big trot that they couldn’t sit it,” Allie said. “I started working with him, and a year later, I bought him for $800.”

At 12 years old, Allie started training “Casper,” the horse that would ultimately become a gold-medal winner on the biggest stage for junior riders in North America. “I broke him, and we moved up the levels together, which was cool because it was our first time doing everything together,” Allie said.

“We definitely had struggles because he’s very athletic, and I was young, but we also had the most amazing moments. I don’t come from a very wealthy family; the horses that I’ve had, I’ve trained up myself. It’s definitely taught me how to ride, and I wouldn’t change it because I’m so proud of Casper for how far he’s come.” 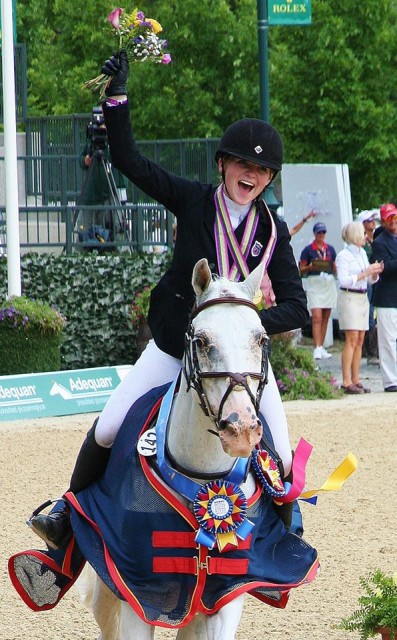 While there were plenty of bumps in the road along the way as Allie and Casper, now 10 years old, learned the ropes in eventing together, she never lost sight of a goal she set from practically the moment she took her first riding lesson: representing Area II at Young Riders.

“Since I was 7 years old, it’s been my goal to get to Young Riders,” Allie said. “Even being there was the most amazing thing. I definitely went there for my team. We altogether were hoping to pull out the gold. That’s everyone’s wish, but we were also very focused on keeping our horses happy and healthy and doing our best.”

Of course, the fact that the Area II CH-J* team also won team gold just makes the story that much sweeter, and Allie said she’s incredibly proud of her teammates, Grace Fulton, Meg Schaeffer and Maddie Mosing, all of whom jumped clear cross-country rounds.

“It wasn’t just that I got individual gold; it was the whole team — we got gold together,” Allie said. “They’re all incredible riders, and we formed the biggest bond after experiencing that together. We were best friends at the end of it, and they were all wonderful, supportive people to be around.”

Allie also said she couldn’t have achieved this milestone without the help of Lynn Symansky, who she trains with at home in Virginia, as well as Area II coach Sinead Halpin, who worked with the riders at training camp for a week prior to shipping out for Kentucky.

“Sinead helped me so much at camp and then when we were in Kentucky,” Allie said. “She taught me so much in just that week we were with her before Young Riders. She made sure we were all ready and took us cross-country schooling at the O’Connor’s so we would be prepared.”

Allie also wanted to thank her mom for all her financial support, as well as Meg Kep and Rich Frankel, co-coordinators of the Area II Young Riders program. “It’s been incredible, and I could not be more thankful to everyone who helped get us there. This is the happiest moment of my life. I’m on top of the world.”