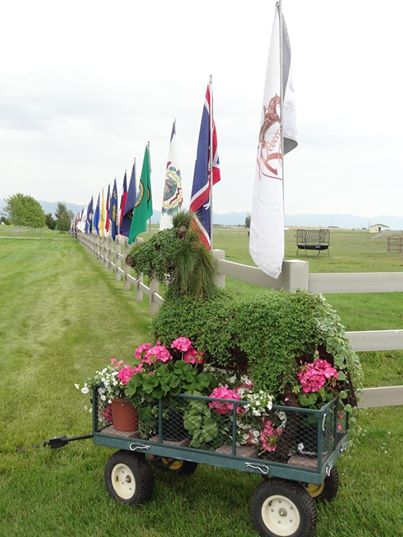 "Lucas" is ready to welcome competitors to Rebecca Farm. Photo via the Rebecca Farm Facebook page.

Good morning EN! The Event at Rebecca Farm is in full preparation for its event to begin tomorrow, and the decorations are clearly going to be as beautiful as they have in the past. West Coast correspondent Chesna Klimek will be bringing us reports from the ground as the festivities get going, so make sure to keep checking back for more coverage of the competition. Good luck to all competitors!

Queen Elizabeth’s racehorse tested positive for morphine. The horse, Estimate, won last year’s Ascot Gold Cup, and tested positive along with other horses. The cause is believed to be contaminated feed, but according to Horsetalk that has yet to be confirmed.  [Horsetalk]

Tickets for the 2015 FEI European Eventing Championships at Blair Castle will go on sale August 21. Beginning August 1, British Eventing members have the chance to buy tickets early at a discounted price. According to a press release on British Eventing’s website, Alec Lochore, Event Director said, “We felt it was very important to ensure all members of British Eventing had the opportunity to secure tickets for this Championship event and we hope that as many people as possible will book early and benefit from the offer.” [British Eventing]

Check out these seven unusual GoPro videos of horse adventures. From a bronc ride to a girth cam, they are pretty impressive. Scroll to the end of this post to see one of the videos featuring a barrel race round. [Horse Nation]

Best of Blogs: Rosie Fry writes about her experiences at Barbury and Tweseldown for Horse & Hound.