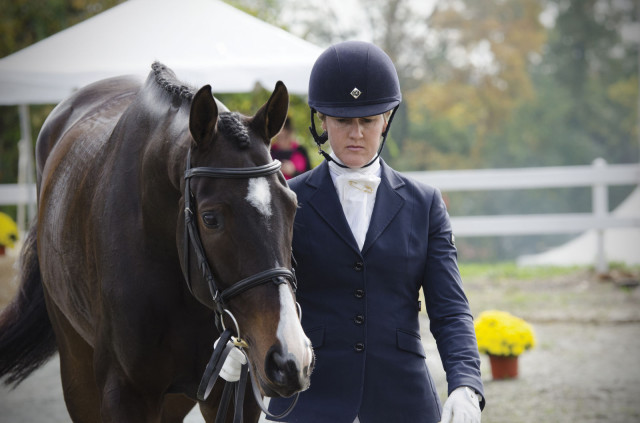 Allison Springer and Business Ben at the YEH Championships at Fair Hill. Photo by USEA/Leslie Threlkeld, used with permission.

Andrew Motion of Old Chapel Farm had asked Allison to put 60 days of training on 4-year-old Ben to “see if he might like to be an event horse” and whether he would be marketable in the sport. Allison liked him so much she bought him herself.

“I was immediately attracted to his good looks, conformation and athleticism,” Allison said. “He is super balanced, has a great gallop and a very natural jump. He might be a little too smart and I think he knows how cool he is.”

While in training with Allison, Ben went to three events. His first show was a combined test at Morningside Training Farm. Then at Surefire in late September he qualified for the USEA Young Event Horse Championships. Both of these venues are a short drive from Allison’s base in The Plains, Virginia, so the YEH Championships in Elkton, Maryland, would be his first overnight trip.

“He has shown to be a really cool customer. I thought it was a big deal for him to go up to Fair Hill as his first away show. He was happy as a clam there,” Allison said. “He didn’t scream or get nervous in the stabling. He was tense in the dressage in the main arena but he was very obedient.”

The jumping test at the YEH Championships, which was easily equivalent to a Training level course, was a big test for Ben. The jumps were bigger than what he had school and he had never jumped into water. “But he rose to the occasion and happily did everything I asked of him.”

Ben received the fourth highest jumping score of all the East and West Coast 4- and 5-year-old Championship horses and was sixth overall in his age group nationally.

“I think if they did the gallop portion of the YEH Championships first, he may have placed even better! The judges told me afterward that they wanted to give him a 10 for his gallop. I can’t wait for the day I get to gallop him cross country for real!”

Allison is now working to form a syndication for Ben. Any interested parties may reach out to Allison by emailing her at [email protected].

“I hope he will go all the way. I did not buy him thinking there was a limit. I’m super excited for his future,” she said.

We wish Allison and Ben the best of luck and look forward to watching them develop their partnership!