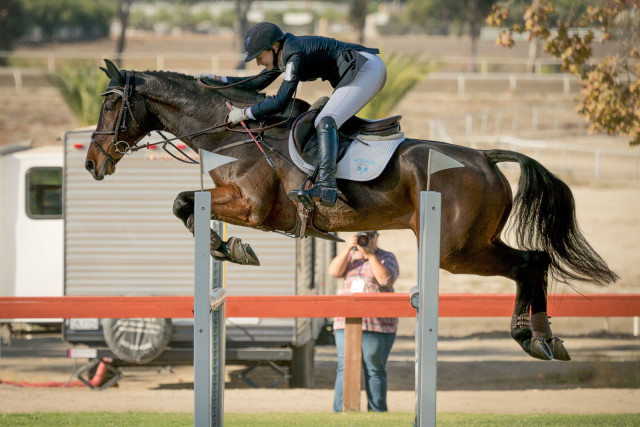 Amber Levine Bergland may be glad she postponed her honeymoon to compete at Galway Downs International this weekend as she took home the win in the CCI3* with Carry On. Amber’s horse is a star, but her new husband clearly is, too, as Amber admitted in the press conference that the honeymoon was specifically planned around this event (makes sense to us).

Amber and her 9-year-old Dutch Warmblood didn’t have an ideal go at their first CCI3* at Fair Hill last month, but they rallied for another try at Galway and ended up winning on their dressage score, 48.8.

“He’s really come into his own all weekend and really matured. He’s got a bright future ahead of him,” Amber said. “It will be nice to go home and have a little bit of a break, but it’s a great note to end on.

“I could feel it in warm up yesterday that he was definitely not done for the year. He was happy to be out there yesterday. I thought it was a great course and it gave him a real confidence boost. He got better and better as he went. Ian Stark sets very bold courses, which my horse likes. Walking the course here and knowing Ian sets on a bigger step most of the time and knowing my horse has wings was a confidence boost.” 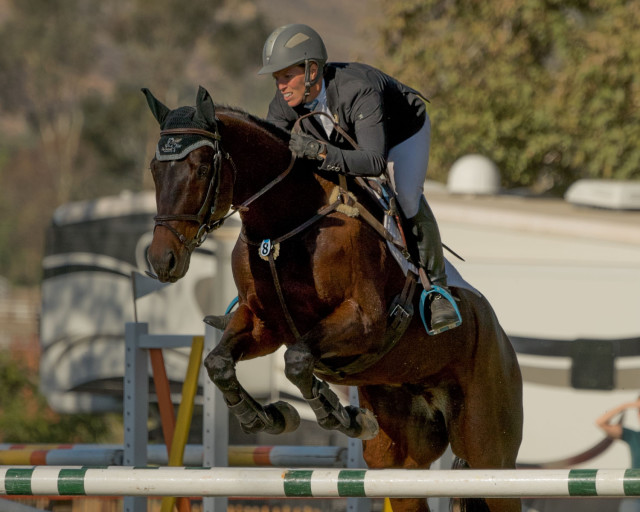 Ellen Doughty-Hume was looking for redemption as well this weekend. She fell off Sir Oberon at the final water two years ago and came back for another try. Ellen and her 14-year-old Holsteiner/Thoroughbred gelding finished on their dressage score of 56.1, steadily climbing their way from fourth after the first phase to finish second overall.

“I’m really pleased he ended on his dressage score. We’ve been working hard at our dressage all year and he’s put in good performances,” said Ellen, who traveled all the way from Texas to compete at Galway Downs.

The pair has given their frequent flyer miles a serious boost this year, as they’ve at Rolex in Kentucky, Rebecca Farm in Montana, Richland Park in Michigan, Stable View Advanced in South Carolina and now Galway Downs in California. At all of these events they have gone clear on cross country and only added two rails total.

James Alliston and his longtime partner Parker also finished on their dressage score (60.2) for third place. “He’s such a great horse. Over the years we’ve done so many big CCI classes and always he does his best,” James said. 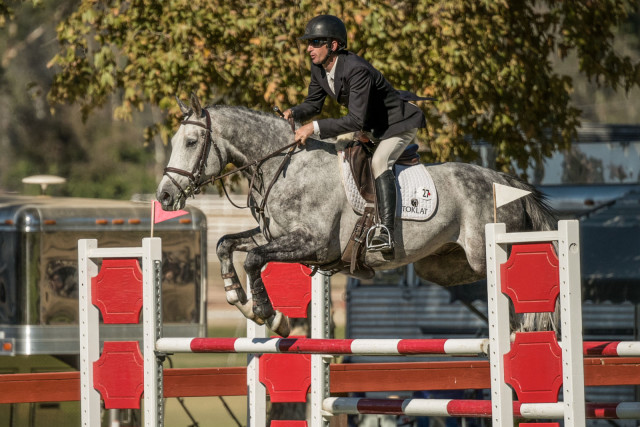 James and Sophie Hulme’s Thomascourt Cooley led the CCI2* from start to finish, adding only 2.8 time penalties across the country for a final score of 47.3 in the 8-year-old Irish Sport Horse’s first CCI.

“He’s not a ton of Thoroughbred but he galloped really well yesterday and likes the job,” James said of the son of the famous Irish stallion, Cruising. “He’s a fantastic mover, fantastic jumper, brave and careful. Now we know he can gallop. Probably his best quality is his mind. He’s a very quiet guy in general but he really wakes up for the jumping part. He’s incredibly trainable and a real sweetie.”

Heather Morris and Charlie Tango were knocking on the door all weekend, but with 2.4 time penalties to add yesterday, they finished a fraction of a point behind James and Thomascourt Cooley in second place. James and RevitaVet Elijah were third on 51.6.

Angela Bowles and Alyssa Phillips’ Oskar topped a huge CCI* division. They were only one second over time yesterday and jumped double clear today to finish on 42.7. Maya Black and Mowgli were in hot pursuit with a final score of 43.1, and Heather and Get Rowdy finished close behind in third on 43.3.

Congratulations to all the riders and the organizing committee on an excellent weekend of eventing. Special shoutout to EN’s own Sally Spickard and her Thoroughbred Mischief Managed for their excellent finish in the Senior Novice Rider division! Thanks also to press officer Ann Haller and photographer Sherry Stewart for helping us bring you this coverage.