Eventers have historically fared pretty well in the Mongol Derby, not because we know the first thing about endurance riding but because as a lot we’re generally tough, scrappy and just psychotic enough to think we can pull it off. Lucinda Green’s niece, Lara Prior-Palmer, won the race in 2013, and several more have found their way to the finish line over the years including (by the skin of my teeth) yours truly.

The 10th annual race, a sort of 1,000-kilometer Hunger Games on horseback, takes place Aug. 5-18 somewhere in Mongolia and will be contested by 45 riders from 13 countries. North America is sending its biggest ever contingent — a whopping 13 riders from the U.S. and two from Canada — and once again there will be a few eventers in the mix.

Let’s break down the American field! 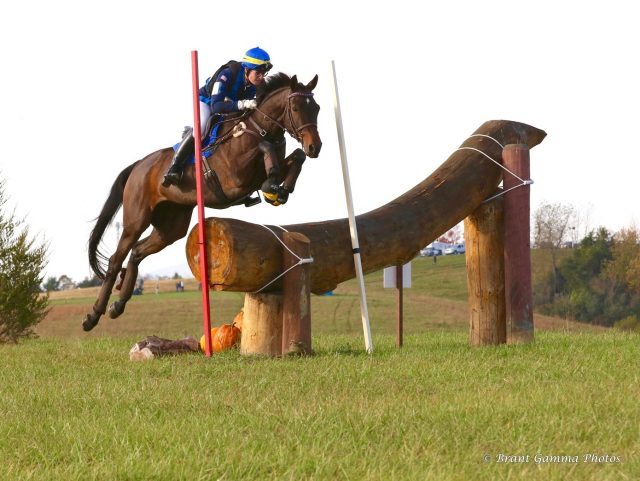 Nickie Merle-Smith, 30, and fiancé Joel Scholz, 44, are racing as a package deal. I sat down with them at the AECs last year and tried to talk them out of it, because I love them, why not just go enjoy a nice Caribbean honeymoon like normal newlyweds?, but they are a hard-headed and adventurous couple which will serve them well on the steppe. Set to get hitched in October, they are dedicating their entire wedding registry to official Mongol Derby charity Cool Earth in support of land conservation. Who needs a bunch of crap from Bed, Bath & Beyond, anyway! Learn more and follow their journey via FB page Married to the Mongol Derby 2018. 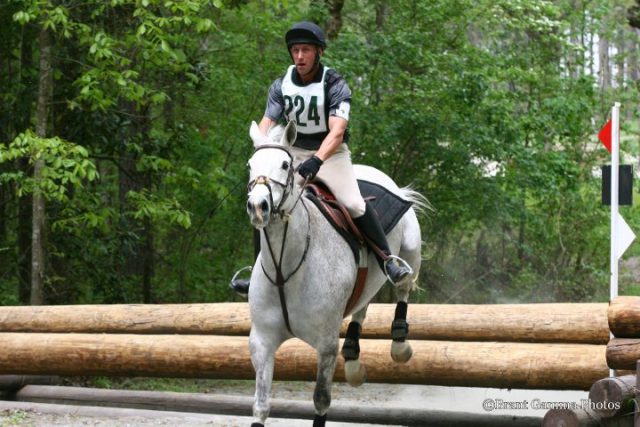 Joel Scholz and Sterling at Southern Pines in 2010. Photo by Brant Gamma Photography.

It’s been a hot minute since Joel left a start box but he spends plenty of time in the saddle; Nickie competes at the Intermediate level and is a cross country natural. They are based in Ocala, Florida, training up young homebred sport horses and riding out with hounds on a regular basis all over the country. Nickie’s grandmother told them, “If you can survive the Mongol Derby together, then you must deserve each other.” Awwww!

Just to heap on one more layer of sweetness, racing the Derby had long been a dream of Nickie’s foxhunting father Grosvenor, but since he broke his neck a few years back, it is not to be. So Nickie and Joel are carrying the torch for dad, too. 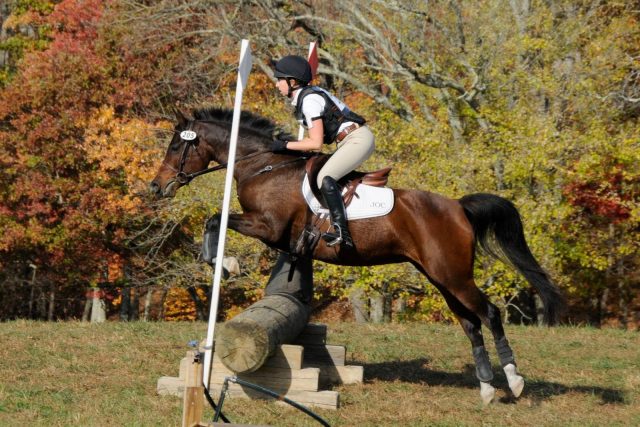 Jocelyn Pierce and her pony Treya at Loch Moy. Photo by GRC Photo.

Jocelyn Pierce, 31, of Rockville, Maryland, is an eventer and self-described adventure freak as well as an editor at Practical Horseman magazine, where she’ll be chronicling her road to the Derby — check out her first entry here.

Love her bio: “Jocelyn believes her horse-crazy childhood of pool-noodle jousting, crude attempts at skijoring and ill-fated trail rides in search of ice cream cones have aptly prepared her for partnering with the Mongolian horse. She is eager to immerse herself in one of the last surviving nomadic cultures, but a misguided assurance that her time in the concrete jungle as a U.S. letter carrier will parallel Genghis Khan’s ‘pony express’ route may prove problematic.”

I predict the best PH cover story ever! I caught up with Jocelyn at Kentucky and it sounds like she’s doing all the right prep stuff, and bonus points for being outdoorsy and gifted at sitting a buck. You can keep up with Jocelyn’s journey and fundraising efforts via her Derby Facebook page here.

A few others to keep your eye on … 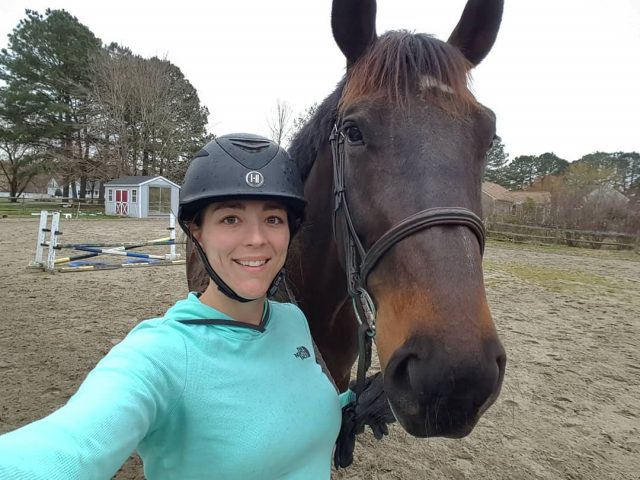 I had the pleasure of meeting Jeannette Lazzaro, 29, of Virginia Beach, Virginia, when she stopped by the EN cross country tailgate party at Kentucky last month. Jeannette grew up riding in Pony Club and eventing, and now works in aviation, but still squeezes horses in — in her spare time she trained a rescue quarter horse. Work took to her to live in Japan last year, so she’s adept at navigating other cultures, and she’s been preparing for the Derby by riding anything she can and “doing lots of squats.” Check out her blog and GoFundMe. Best of luck, Jeannette! Hang in there, Jeannette’s mom! 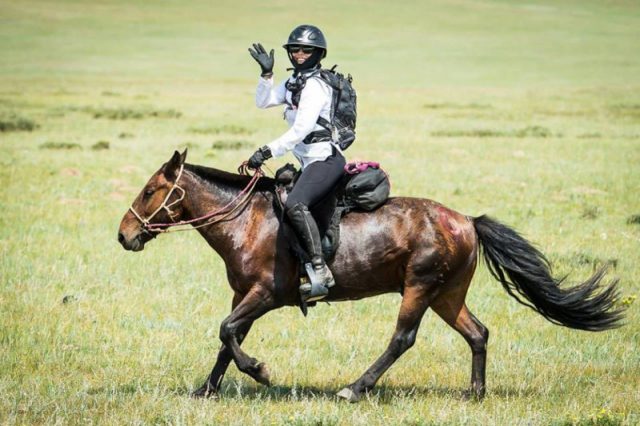 Madison Smith, 28, of San Francisco, California, is a hunter/jumper rider who is taking her second whack at the Derby after a bump on the head and some breaks in 2016. I interviewed her on the Horses in the Morning podcast last year about her sudden “game over” moment:

“The race was going great, the pacing was great, and it was the last leg of the second day, so going from station six to seven,” Maddie explained. “I don’t remember what happened, I think I crashed but I’m not exactly sure. When I came to, woke up, the doctor had already come — I’d pushed my SOS button (which sends an emergency signal from the riders’ tracking device), although I don’t remember pushing it. I had an IV in my arm, they’d taken my shirt off, my helmet was to the side. And my horse was there, which was cool because my horse didn’t run away. I’d thrown up on myself. It was kind of surreal.”

The “adventure ambulance,” as she called it, drove her five hours through the night back to Mongolia’s capital city, Ulaanbaatar, where she was treated at the hospital. Maddie says it was a bummer to drop out of the race so early in the game but, on the bright side: “It was nice that I didn’t have to be airlifted.”

Every day that you don’t end up in a medevac during the Derby is a good day, I guess. And she’s been training every day for the past year for her rematch. Go get ’em, Maddie! Check out her GoFundMe here. 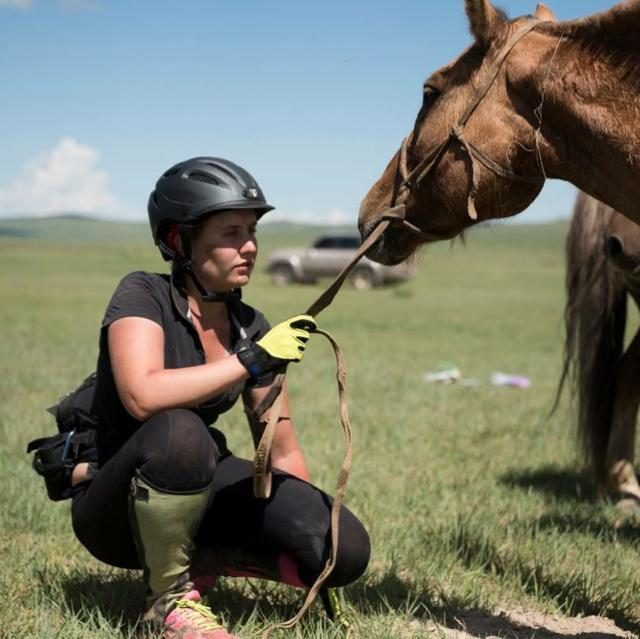 My money is on Devan Horn, 24, of Houston, Texas, who is contesting her third Derby after very nearly winning it in 2013 (she crossed the finish line first but her horse’s heart rate was slow to go down) and then falling violently ill (read: her kidneys were shutting down) during the 2015 race. Still the fastest ever competitor, this will be her fifth ride over 500 miles, and physically she’s in top form — she ran (not rode, RAN ON HER OWN TWO FEET) a 100-mile ultra-marathon in February … I can’t even.

Devan was my Derby mentor, and she has been so generous in sharing her experiences and knowledge with other competitors. Such an ambassador for the sport, and an inspirational human being overall. I would not have made it through the Derby without her guidance and support (or at least not with my calves intact — fenders not stirrup leathers, people!) and I can’t wait to cheer her on to the win this year! Third time’s a charm, girl.

Tamara Beckstead, 54, Rockwood, Canada
A small animal vet who feels most alive atop a horse. Eventing has earned Tamara the nickname “Teflon Girl” by her coach. Hunting satisfies her thrill of speed; Dressage, her desire for beauty and perfection; and Side Saddle got her and her horse, Modesty, onto a movie set. She looks forward to the Derby providing an escape from her current reality and was inspired to take this adventure by the Doris Day song “Enjoy Yourself” (look it up and sing along!).

Carol Federighi, 58, Takoma Park, Maryland, USA
Government lawyer, endurance rider, Ride and Tie competitor (whatever that is?!). Always wondered if she could ride the day after a 100-mile ride, now she will find out. Convinced a friend to sign up, will also find out how far the friendship goes …. “Looking forward to the wide-open spaces, the gutsy horses, and living by my wits rather than my phone”.

Heather ‘Flash’ Accardo, 37, Prairieville, Louisiana, USA
“My mom always made sure I had a horse to ride while growing up — for that I am eternally grateful.” Flash grew up showing Arabs in every event possible and now endurance is her love. Her motto in life is: “If you want something bad enough you’ll find a way, otherwise you’ll make an excuse.” She has been blogging her preparations on Facebook at Flash’s Journey To The Derby and is raising money for her charity Heroes and Horses.

Michael Gascon, 28, Poplarville, Mississippi, USA
Fifth generation horse trainer who has dedicated his life to the way of the horse. “Ready to go on an adventure for the ages!!”

Matthew Graham, USA
Mechanical engineer, yoga teacher, freelance outdoors and adventure writer. Hang glider pilot, paraglider pilot, SCUBA diver, rock climber, skier, sailor, paddler and cyclist. Started riding horses 25 years ago because it was his wife’s favourite sport. They rode together in fox chases, played polo together for over a decade and took equestrian vacations throughout Europe. He then tragically lost her in a freak hang gliding accident two years ago. Is “competing in this race in honour of her and her love of horses and her spirit of adventure.”

Pamela Karner, 64, Ithaca, New York, USA
Recently retired large animal veterinarian. Has practiced for over 30 years in Ithaca, New York. Is an endurance rider, veterinarian and ride manager in both the US and more recently in Australia as well. “I have felt drawn to Mongolia since I was a little girl AND I thrive on challenges! I can’t think of a better way to satisfy both of those than racing across the steppes. I wake up every morning ridiculously excited and equally frightened by the upcoming race. I don’t feel 64 but ask me that after the race!”

Kelsey Opstad, 27, Anchorage, Alaska, USA
A commercial fishing captain and paramedic who grew up showing dressage, but has since found a love of travel and other sports (backcountry snowboarding, speedflying, snowmachining, paragliding, biking, climbing). The Derby is “an opportunity for me to immerse myself in horseback riding once again, and a challenge to combine riding skills with those of navigation and survival. I wanted a reason to bring horses back into my life in a big way, and this was the one which excited me most.”

Kelsey Riley, 29, Lexington, Kentucky, USA (Canadian)
Having not ridden a horse for two years prior to applying, Kelsey decided the Mongol Derby would be a good excuse to get back in the saddle (no, seriously). After she was, shockingly, actually accepted to participate, Kelsey has discovered that (thankfully) she has not forgotten how to ride. A rigorous training schedule should hopefully see her ship-shape in August. She is an editor of the Thoroughbred Daily News, and is riding to raise money for the Thoroughbred Retirement Foundation’s Second Chances Program at the Blackburn Correctional Complex in Lexington, KY.

Christine Roberts, 29, Dallas, Pennsylvania, USA
Growing up with three brothers on a farm in Colorado did not cultivate a weak person. Instead it created an independent, tough-as-nails woman who enjoys martial arts, competitive shooting, travel, and horses. Christine has been riding since in the womb and has never been without a horse. She grew up riding in Competitive Trail and made the switch to Endurance Racing in 2007. Easy going yet highly competitive, she cannot wait to breathe in the Mongolian air on the back of a galloping horse taking on the Derby!

May the good lord have mercy on all their souls. Go Eventing!