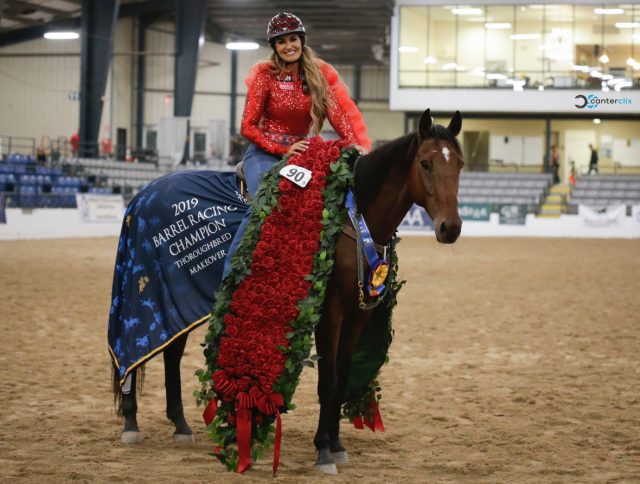 Fallon is no stranger to being a champion — as a barrel racer, she was the 2014 Women’s Professional Rodeo Association World Champion and 2018 AQHA World Champion — but in an effort to continue to grow both athletically and personally, Fallon takes on a new challenge every year: in 2018, she took up show jumping. This year, she took on the Thoroughbred Makeover.

After clinching the title of champion in the Barrel Racing discipline and once voting opened to the public for the title of America’s Most Wanted Thoroughbred, Fallon’s fan base rallied behind her and the 2014 Oregon-bred gelding to boost them into the big win.

Taylor acquired Cowboy Swagger sight unseen based on the advice of a friend who knew the horse on the track and loved his personality. He made 16 career starts, the last of which was in January 2019. The gelding, who had previously sprinted flat-out during the barrel competition only a few hours ago, stood completely calm, cool, and collected while bridleless for the awards ceremony.

“I think the coolest thing about these Thoroughbreds is their demeanor,” Taylor commented. “This is a special, unique horse. I’m just sitting here with no bridle on, people all around, all these cameras pointed at him, and he’s completely unaffected. The Thoroughbreds want to please. And these guys are made to run — they’re made for this job. It’s our job to be kind, be patient and help these horses learn the pattern and learn their new job. We need to go out and get these horses and scoop them up!” 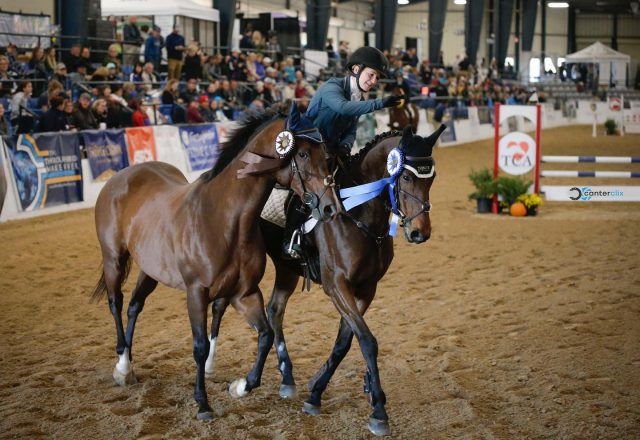 Rosie Napravnik‘s four-year-old Sanimo raced four times without any notable finishes, but finally broke his maiden as the pair held on to their first place preliminary result to clinch the title of 2019 Eventing champions in yesterday’s finale.

Though Sanimo fell short of winning the overall title of America’s Most Wanted Thoroughbred, Rosie could not be more pleased with the Kentucky-bred who has found his niche in his second career. Though there were big dreams in mind for the royally-bred gelding (Smart Strike x Sanima, by Galileoa), his racing connections at Dell Ridge Farm recognized that his athletic potential lay in another in another sport and gave Rosie the chance to help him realize his talent.

Rosie, a former racehorse jockey herself, is no stranger to second careers since she’s now living her’s as a trainer of off-track Thoroughbreds. Rosie had the chance to gallop Sanimo while he was still at the track and says that since then all she could think about was galloping him on cross country. She acquired Sanimo in early in 2018 once Dell Ridge Farm confirmed that he was done racing, and allowed him to relax and mature for nearly a year before beginning his retraining.

This was Rosie’s fourth trip to the Makeover, second finale appearance, and first discipline win. She also placed eighth with Bethel Wildcat, and ponied him into the ring for the victory gallop after the finale. 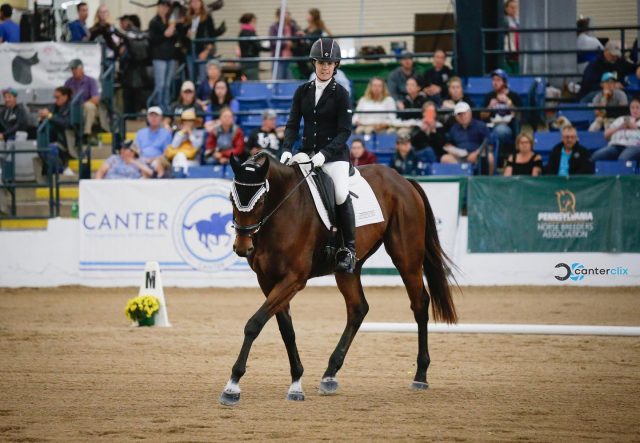 Two other eventers took home champion titles in other disciplines, showing that they’re just as versatile as the horses they trained. Alison O’Dwyer and Fifth Ace clinched the finale win for the dressage discipline. Alison also won the Dressage in 2017 and Chapter Two also finished as reserve champion in Eventing in both 2017 and 2018.

Amy Bowers competed in the Freestyle and Show Hunter competitions with Grande Warrior. A truly lovely and connected routine earned them the title of Freestyle champions. Their routine included lateral work and jumping at liberty, along with bridleless riding.

Barely a dry eye in the house as #163 Amy Bowers and Grande Warrior perform a beautiful, connected freestyle with no bridle! They were sitting in first place going into the Finale.

Congratulations to each and every horse and rider pair who competed in this year’s Makeover!