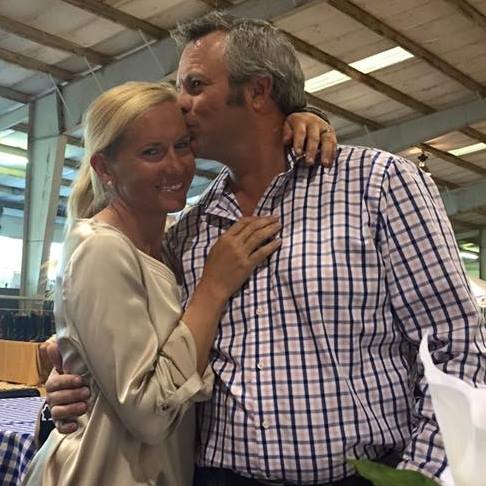 It was a weekend to remember for Angela Gryzwinski and Andy Bowles, who began dating just about a year ago at Woodside Horse Trials. Angela competed in the USEA Adequan Gold Cup Final at the Nutrena American Eventing Championships this past weekend with her OTTB mare, Novelle, and she capped off her dressage day with a 50th birthday celebration for friend and longtime client Jim Snider.

“We made plans to celebrate Jim’s birthday at AECs since a lot of us were there and staying in campers,” Angela said. “Jim got up and started talking towards the end, which I thought was a little out of the ordinary. He said a lot of things about how happy he was to be a part of the (Tempus Eventing) family, and then he said how happy he was to have Andy as a part of it.”

“Then Andy got up and started to talk, which was very strange,” she continued with a laugh. “To be honest, I’m not even sure what he said, but the next thing I know he’s down on one knee and there was a ring, and I’m pretty sure he asked me to marry him.”

Indeed he did, and Andy had pulled off the ultimate surprise, as Angela had no idea the proposal was coming. “My mouth was just open in shock and eventually he said, ‘You’re going to have to come up with some sort of response!’ So, of course, I said yes in not so eloquent terms through my shock.”

The idea of the proposal came spontaneously to Andy, whose primary goal was to pop the question when Angela’s friends were around. “It was one of those things that needed to be done at the right time, when her friends were there,” he said. “It was pretty nerve-wracking!”

Andy informed Jim of his plans, as he did not want to steal his birthday thunder, and the proposal went off without a hitch. Both members of the eventing community — Angela as an Advanced rider and trainer and Andy as an event organizer and official — they’ve already started planning and have set a tentative date based on their respective schedules.

Mike Huber will officiate the wedding, so he’s studying hard to become official for the job as we speak. As for Angela and Andy, they’ll celebrate their one-year anniversary at Woodside this weekend and recently purchased a new farm together.

When asked for advice for relationships in the equine industry, Andy was quick to name what has worked for him and Angela. “You have to make time for ‘us.’ With our travel schedules, we always try to put in some time on the calendar to do non-horsey things and just be together,” Andy said. “We also have to respect each other’s careers and schedules and find time to talk when we are away from each other.”

The EN team wishes Angela and Andy the greatest of happiness as they move forward with their lives together. Congratulations on a perfect AEC engagement!