We first met Sadie Buchenau, originally from California, in 2014 after she took up a working student position in Germany for Andreas Diboski. Since then, Sadie has become a budding professional herself, now basing in Germany with her partner, Esteban Benitez Valle. Sadie shares an update on what she’s been up to for the past six years in her newest guest blog for EN. 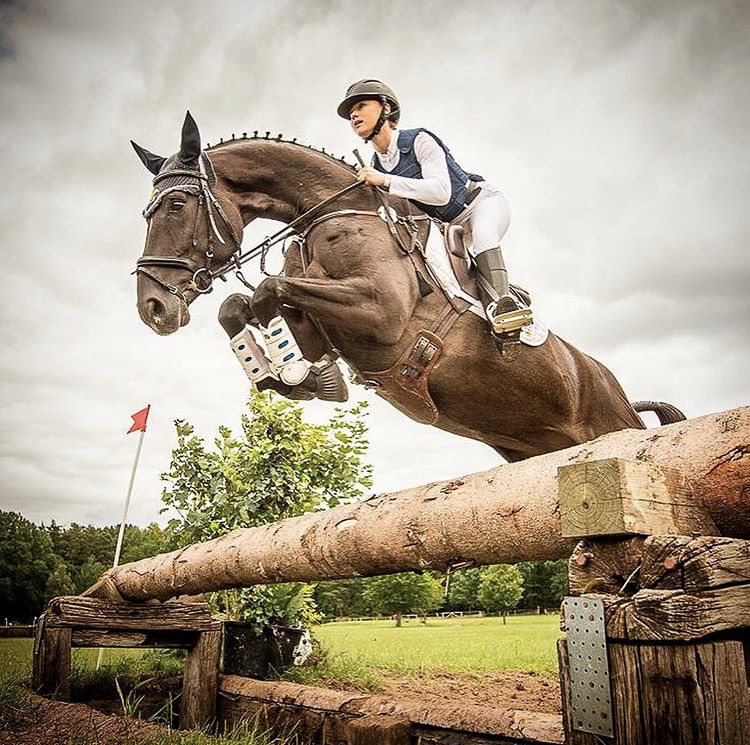 I grew up in the beautiful Santa Monica Mountains in California, in Topanga Canyon. When I was about seven years old I received a trail ride at a local ranch as a Christmas present. I spent about a year just going on trail rides and learning basic horsemanship skills until I wanted to learn to jump. From there we moved a few miles deeper into the canyon to Mill Creek Equestrian Center, which became my addiction for the next two decades. I spent every possible minute at the stable, until I began working in exchange for lessons.

At 18, I moved abroad to pursue my riding career. It definitely was a very big leap and a kick in the butt in terms of independence, however I was always a go-getter and pretty independent from a very young age. Toward the end of high school, I began to realize that the typical college route was not my path. Whereas some universities in the States have equestrian teams and offer an education in equine basics, there is nothing quite as extensive as the system in Germany.

When I graduated I decided to take a gap year and move to Germany and pursue a working student position. I had interviews with a few different riders from the German Olympic Team and was offered positions with all of them. This was my first major decision, who did I want to work for? After lots of deliberations and weighing the pros and cons, I chose to take a position with Andreas Dibowski.

The transition, to be honest, was not the most difficult part. It was saying goodbye to family and having that “last meal” with Mommy while knowing I would be left “alone” for the foreseeable future, with new people, new horses, etc. Here in Germany, you don’t really get much of an adjustment period. It’s learn fast, keep up, work hard, or go home, and I was not about to go home.

The language barrier was frustrating at times, but most major competition facilities in Europe are made up of very international team members and English is a basic form of communication. Minor misunderstandings and confusions are part of the game, but once you get in the flow of things, the language issues work themselves out.

After completing my year internship, I returned to the States to continue expanding my career. I went back home to my childhood stable and immediately got a job teaching and training horses. I worked in the lesson program and helped with basic management at the stable. I grew a nice client base and also did some freelance riding throughout the area. At some point I realized I would not be able to teach to the extent I wanted to without some type of certification or licensing, which is when I decided to return to Germany and take the official step to study in their apprenticeship program. 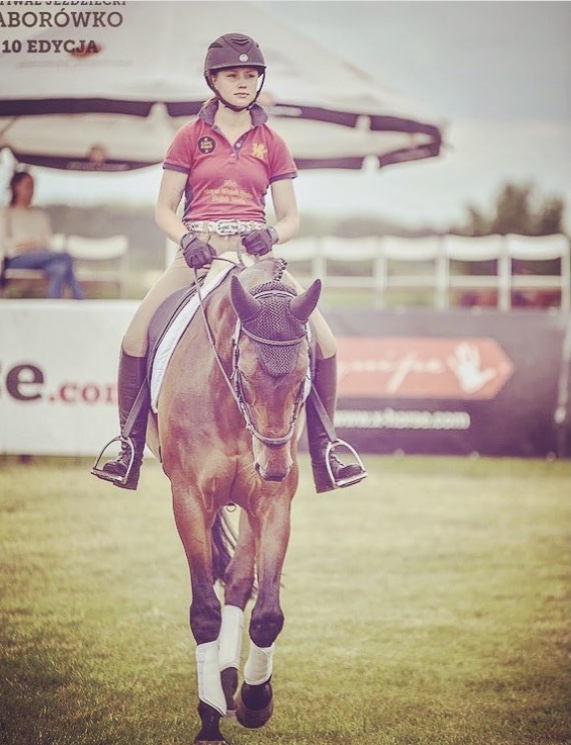 Here in Germany there is a three year apprenticeship program with a few choices of majors, i.e. service, breeding, driving or, in my case, classical riding and training of horse and rider. Throughout those three years I learned German, attended German equine school, and trained with a few top event riders as well as a showjumping and breeding stable in Holstein.

After completing my degree – and about two weeks before my flight home – I met my boyfriend, Olympic qualified four-star rider Esteban Benitez Valle. At the time we met, he was operating his self-made business with almost 20 competition horses. Things between us just “clicked”, so I made the big decision to stay in Germany.

I am very lucky to have met someone with similar goals and ambitions, who trains his horses and rides in the way that I do. Together we are training, teaching, competing, selling, and integrating our riding style into the classic German styles. We currently have a full stable at Cádiz Sport Horses.

There are quite a few differences between the American way of riding and the German way, most of them major. However the biggest difference would have to be in the show jumping.

In the U.S. we are taught a lot in half-seat or two point position; here they would call it your light seat. We are taught in our jumping courses mostly to be up off the horses backs, seeing our distances with a forward eye, active canter, waiting for the distance, and softening to the fences.

In Germany we are typically taught to be sitting deep in the horses backs, with constant contact, driving the horse from front to back, powerful tempo, connection in the bridle before, over, and after the fences to be in constant support of the horse.

For me, this is the biggest difference; working the horses round between the fences and not releasing the pressure before the fences, as opposed to allowing the horse to stay open in the throat latch and softening before the fences. The ideas of what are being accomplished are similar, but in general it was an adjustment developing a completely different feeling.

In the end I have continued to lean more towards my American seat, while still holding onto the German influence. My partner and I strive for the same overall feeling when riding: soft contact, self carriage, activity and push from behind, while remaining supple and light, rather than a constant pull on the bit. I still tend to find my half-seat between fences, rather than sitting through the entire course.

This idea is also translated into our dressage and cross country mindset as well, as we want horses who are more elastic and using their natural suspension, rather than a forced suspension.

Throughout my apprenticeship this was extremely difficult for me, trying to learn and gain all possible knowledge, while still holding onto my feeling and finesse. There were many ups and downs, frustrations, confusing moments and longer periods of time, but in the end I am very thankful to have developed both feelings and the ability to find a balance between the two. At this point in time, it is very exciting working with someone with a similar riding style, as our clients are seeing the results, and people are recognizing that there is a way that works that is slightly different than what they’ve known before. We are hoping to be able to continue to share our techniques with as many people as are open to it. 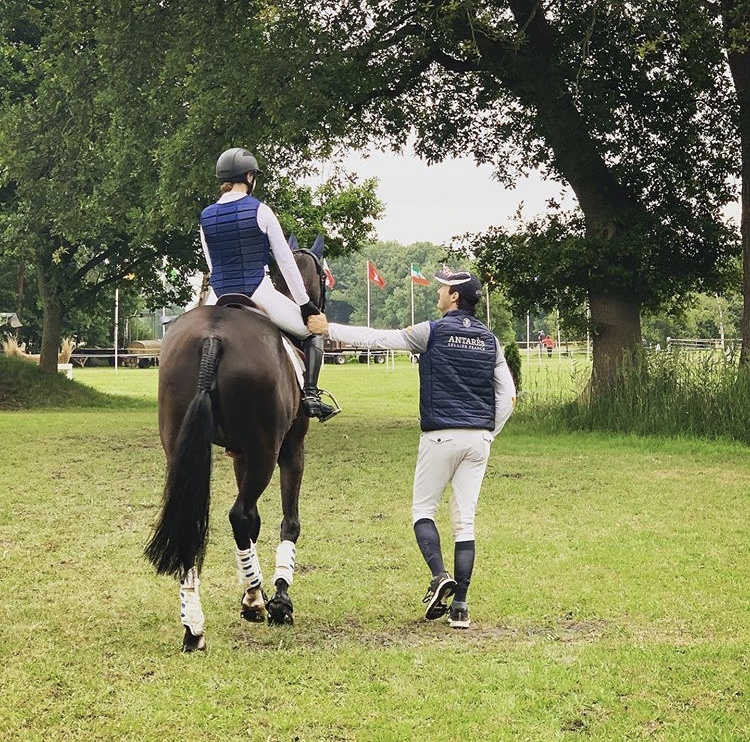 Some of my proudest personal accomplishments this past season were in the competition ring. I had waited a long time trying to prove myself in Germany and unfortunately wasn’t given the opportunity to do so until this last season. The competition season for eventing has come to an end for the winter but I have a total of six wins and another five placings under the top 10 under my belt this season; four wins with one mare, two with another, and all six of these wins were with horses who had never evented before, so it was a successful and satisfying season as a trainer and rider.

My newest and probably most exciting project at the moment is my new horse. Before coming to Germany I sold my heart horse back in the states, and very tragically he passed away last year in a pasture accident. Purchasing my own horse was a big step for me, as I had waited a long time for the right one to come along, and the right moment in my life, with happiness and stability, to be able to do so with Cleo, a four-year-old Hannoverian mare who is already showing lots of promise for a successful future.

The whole experience has been a challenge. Not giving up when times got hard, wanting to throw in the towel and sticking with it, but also being strong enough to know when something isn’t right and making the decision to get myself out of a bad situation. I’ve done a bit of both and in the end it seems to have been worth it.