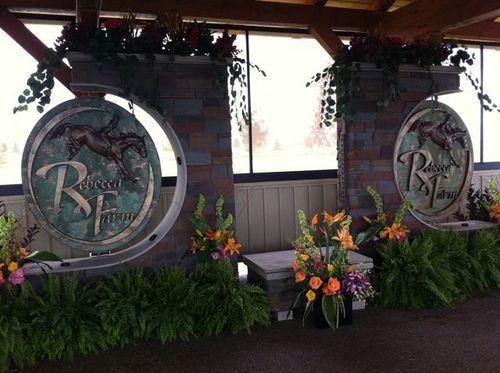 You’d be excused for thinking that Sharon White might be a bit giddy having just been awarded the inaugural Rebecca Broussard International Developing Rider Grant, worth $30,000, and indeed she is, but the frequent bursts of laughter, and exclamations are nothing new, that’s just Sharon! Unmistakeable at events, decked out in her signature, beloved orange, it would be hard to find a more popular winner or better ambassador for the sport.

It must have surely have been amongst the longest five months in Sharon’s life between interviewing for the Rebecca Broussard Travel Grant at the Event at Rebecca Farm in July, and waiting to hear the outcome last weekend at the USEA convention in Nashville. I asked her if she’d been able to forget about it at all, but she told me it had constantly been on the back of her mind. Sharon also said she had absolutely no clue (and thus no preparation) that she was the lucky recipient until they announced it at the Awards Dinner, which makes her gracious acceptance speech even more remarkable – think of all the Oscar winners who’ve failed miserably – more proof, as if it were needed, that Eventers Rock, and Sharon is quite a special one.

“It means so much to me on so many levels. I didn’t have a speech prepared but I sort of knew that if I got up there, what I wanted to portray and what it meant to me. It was also about what I’d experienced over the weekend too. I couldn’t tell you now what I said, I’m glad I had thought about it beforehand because I was crying, and nervous!” 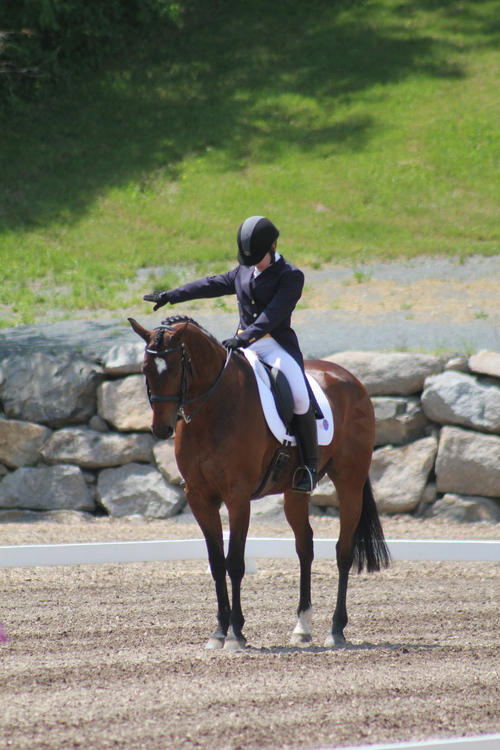 All the applicants for the grant were obligated to attend the Convention, and Sharon was bowled over by her first visit,
“Now I realise that I should have been going to Conventions for much longer – I was just so amazed and impressed with everything I saw there. The work that people put into this sport is just amazing and truly inspiring. The point of this grant and Becky’s vision is to inspire, and it really opened my eyes to the extent of how many people work so hard to better the sport. It was so cool to see that, to see that we all want the same thing. It made me want to be more involved, and I thought I was involved! I love this sport, and I work at it every day in some fashion, but there’s always more you can do. I’m really proud to be a member of this organisation and all the work that they do, and it was amazing to see that firsthand.”
Sharon said she was completely overwhelmed “in a really nice way,” and started crying as soon as she realised she had won the grant. Instead of naming Sharon, the winner was revealed by reading parts of her application out loud, and at the first sentence, ‘Jimmy Wofford (Sharon’s trainer) has said of this person…’ Sharon had an inkling it might be her, then she thought it was probably her, then when she knew it was definitely her she says the tears started! 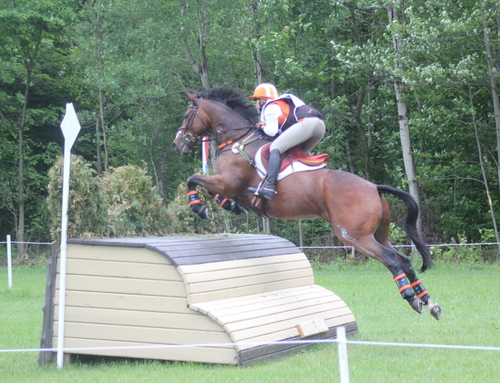 Although she’s only had a couple of days to think about how she’ll spend the grant, Sharon’s already made plans for the year ahead. In early January, she and Reggie, aka Rafferty’s Rules, will head down to Wellington, Florida for some dressage training with Linda Zang who they’re familiar with, and some jump training with US Coach George Morris,
“There aren’t any stipulations as to how you spend the grant – it’s an International Travel Grant to develop yourself, so that is my plan. Reggie is, at this point, aiming for Rolex. In my ideal world he’ll win that and head to London, and the grant can help with that, and if not he’ll go to Burghley. The point of the grant is that you’re going to do what’s right for your horse, no matter what, so if something happens I’ll have a Plan B, C, D…”
Sharon has been working with dressage coach Linda Zang since spending last winter in Wellington, and she reports a huge improvement in her and Reggie’s dressage under her tutelage. The opportunity to clinic with George Morris came about at Jimmy Wofford’s recommendation, and really, she said, only because she had spare time on her hands after Reggie got hurt at Rebecca Farm.
“The clinic was fabulous, and then Jimmy and I made a plan, and training with George is part of the plan.”
In September 2010 Sharon and Reggie spent six weeks in England, culminating in a completion at the Blenheim CCI***.
“I stayed with the Tuckers and that was amazing, they were just beyond wonderful so I think I would maybe hope to go back there, it was a great base, but also I’m a big believer in doing as much as you can, that’s why I want to go down and work with George for a bit, I want to glean all the information I can from him! Isn’t that the art of horsemanship? You get it from everywhere.” 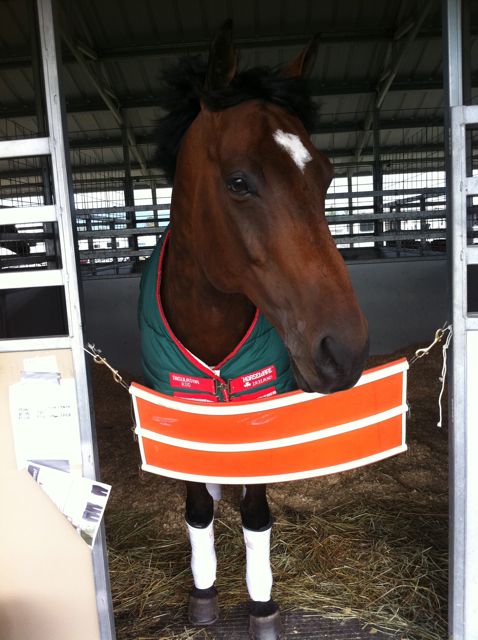 In typical silver-lining style, Sharon also tells me that Reggie is feeling great now and cantering,  and that there may even have been an upside to his injury in July,
“He is so happy to be back in work, he feels amazing. I actually feel like during his time off I got to do a lot I wouldn’t have done otherwise, and worked on some things I wouldn’t have worked on, so it all ends up being for the best, I hope.  He had a bruised coffin bone, which is better than a soft tissue injury or anything like that, bones heal – I know that first-hand!”
While Sharon and Reggie spend the summer abroad, Sharon has no qualms about leaving her barn, business and even her parents in safe hands,
“I don’t worry at all, that’s not even a concern. The people I have at home are so amazing – my assistant trainer Tim (Bourke) takes care of everything along with everybody else so that’s just not an issue for me which is huge.”
The Last Frontier Farm family grows every Christmas, a tradition Sharon explains,
“Everyone is out buying presents for everyone, and we decided it was just insane, so every year this is what we do, it’s just a nice thing, we decided to help someone who really needed it. Every year we adopt a family and it’s wonderful. It’s an American family, arranged through a church but completely anonymous.”
Before I let Sharon go, I ask her if there’s anything she’d like to add, or that I’ve forgotten,
“I would just love to reiterate how wonderful the Broussard family are, for Becky to have this vision is just amazing. The selection committee were wonderful, even though they gave nothing away – I saw all of them all weekend at the convention before the dinner and I had no idea, I figured there was no way I was getting it! It’s a lot of work to be on the committee, and all the applicants were really worthy, I wouldn’t have wanted to make that decision. Also, when they announced my name, I felt like everybody was 100% behind me and I’d like to be able to thank them all for that, it felt so special.” 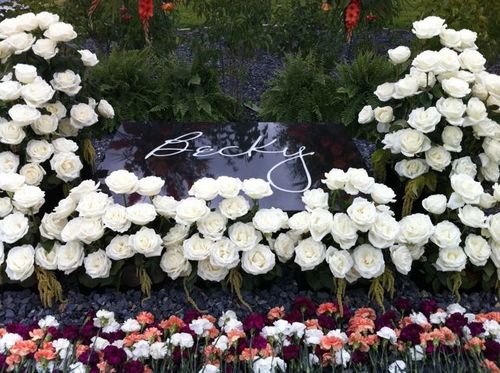 We’d like to congratulate Sharon again, and thank her for our time. Sharon assures us she’ll be keeping her blog up to date, and she’s active on facebook, so you can follow her progress, both Stateside and in the UK, and I have no doubt we’ll be hearing much more from her right here on EN too.  Go Team Orange, and Go Eventing!