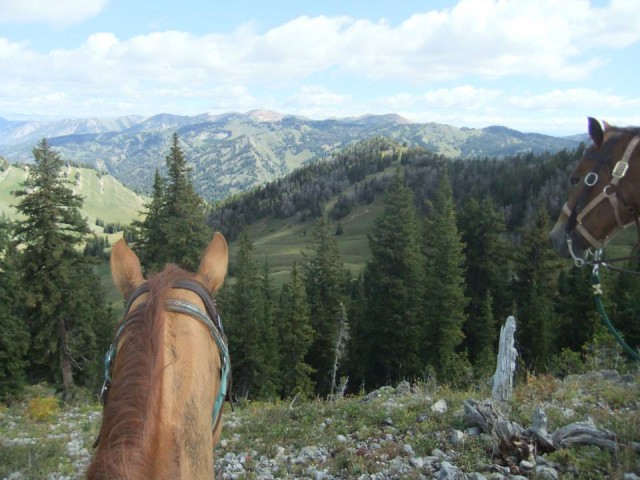 I recently returned from a trip out West, and after seven days of riding through extreme Wyoming wilderness, let me tell you…those horses give a whole new meaning to the term “work horse.”

The definition of a tool is “an article intended for use in work,” and the horses I rode that week certainly met that definition. At first glance I was not impressed by their shaggy, dull coats, overgrown manes, and bulging bellies, but over the course of a few days I noted how enthusiastically these horses approached their jobs. And although they didn’t do so particularly stylishly, or under the pressure of a stopwatch, they tackled questions each day that would have rattled even the toughest of event horses.

September marks the beginning of the elk hunting season in Wyoming, so every fall my boyfriend heads west to hunt and guide for a commercial outfitter.

This year I was lucky enough to visit during the outfit’s set-up week which gave me the opportunity to enjoy all that the camp had to offer before the first clients arrived. This included a small herd of horses which the outfit rents from a local cowboy (An actual a cowboy. Not just a guy in Wranglers).

Camp is located 25 miles inside the Bridger-Teton National Forest. Getting from camp to the closest town, Alpine, Wyoming, requires an hour-long drive on a dirt road. During this drive you will regularly encounter massive potholes, grouse, mule deer, and free-range cows who are perfectly comfortable with the idea of planting themselves directly in your vehicle’s path.

From there it is another hour on a two-lane public highway until you reach Jackson. In other words, camp is very remote and you can forget about updating your Facebook or checking Instagram once you’ve left town. 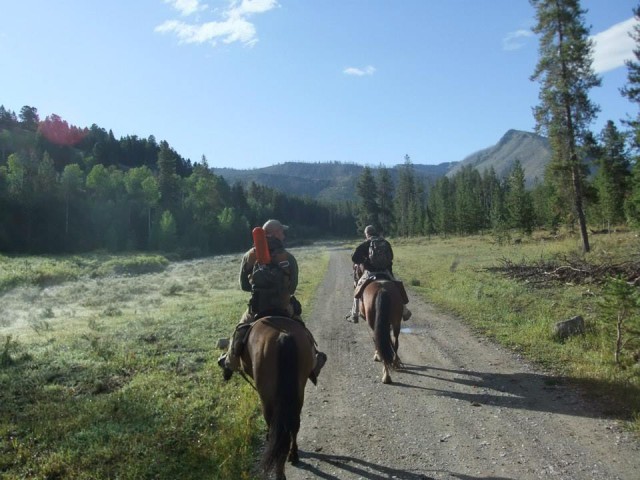 With the exception of getting back and forth to the airport, vehicles are unnecessary. In Maryland, you can pull your truck off the side of the road then hike a short distance to your tree-stand, deer blind, or what have you. However, the Wyoming wilderness is far too dense and too treacherous for even the best 4×4, not to mention that a standard pickup is about four feet too wide for the narrow trails.

So why not hunt on foot? Even for an experienced hiker, tackling these mountains on foot is ambitious.

In order to get anywhere within range of the notoriously elusive elk that make their home in the Little Greys Mountains, one must travel anywhere between five and ten miles in, and another one or two miles up. Instead, hunting clients hit the trails (I use “trails” loosely) on horseback every morning, well before the crack of dawn, often riding three or more hours in order to reach their hunting destinations by daybreak. 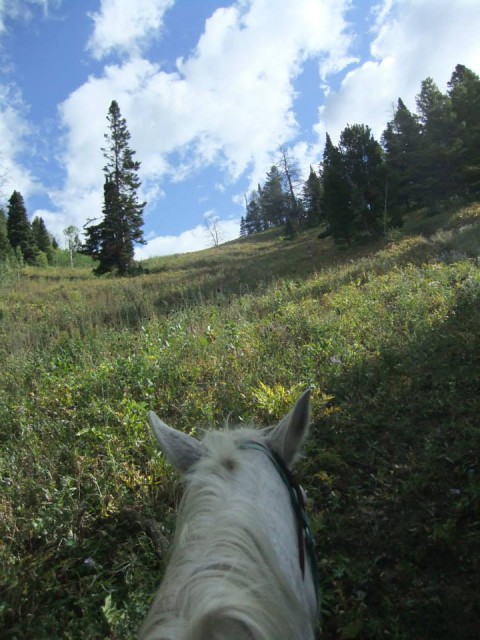 While there are a few main trails leading to various parts of the immediate hunting area, much of the riding in the Little Greys involves making your own trails.

This means hugging the edges of shale cliffs, crossing rivers, maneuvering up and down steep grades, slogging through elbow-deep bogs, and picking your way around, over, and through fallen trees and heavy shrubbery. Given their size, strength, and speed, horses are simply better suited to the task than are vehicles or humans. 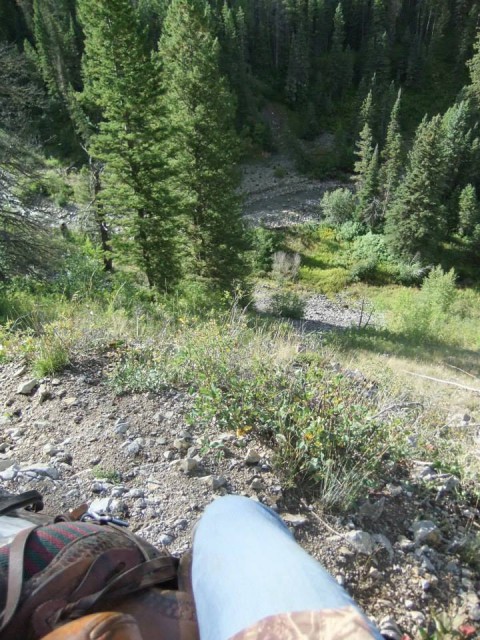 This was even more fun in the dark.

In addition to carrying their riders, horses are also responsible for hauling equipment and, after a successful hunt, entire elk. Let’s assume that each hunter weighs between 180 and 200 pounds. The western saddles the horses wear average between 30 and 40 pounds.

In addition to a cumbersome bow or rifle, some of which can weigh up to 15 pounds, which is secured at the horse’s shoulder, each hunter also brings along a day pack stuffed with food, water, ammo, and several layers of clothing. Let’s figure that’s another 15 pounds. So on an average day a horse may be carrying anywhere between 230 and 270 pounds.

To put that into perspective, racehorses usually carry between 112 and 126, depending on the race. I would guess an event horse carries something in middle—between 150 and 180 pounds. So although these horses aren’t traveling at top speeds, nor are they catapulting themselves over giant cross-country jumps, they are hauling hefty loads over very tough terrain for hours at a time. And that’s on an average day… 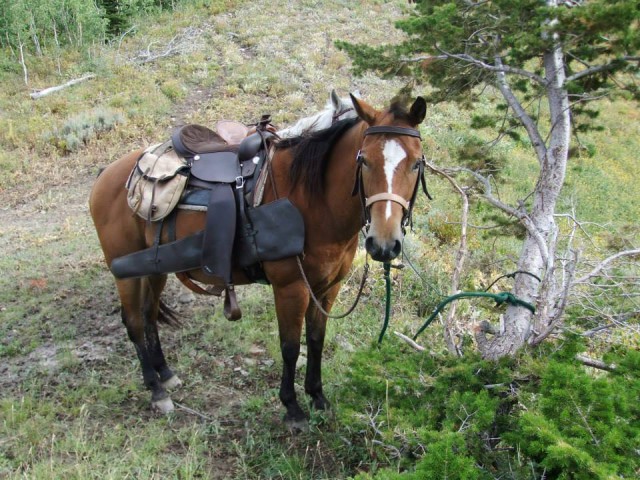 Dressed for the day

On a good day, though, a horse might be charged with hauling an (almost) entire elk back to camp. An elk can weigh between 500 and 800 pounds depending on sex and age. When an elk is killed, it is gutted and quartered on site, and packed back to camp on horseback (say that ten times fast).

Although pack horses may be led by hand or ponied behind another horse, thus eliminating the weight of a rider, tack, and supplies, they are still carrying 50-60% of the elk’s live weight. While two horses are usually required to split the weight of a large bull elk, one horse may be all that’s needed to pack out an immature bull or a cow elk.

The amount of elk that is brought back to camp (in one trip) is also largely based on how far it was killed from camp and how rough the terrain will be for the horses upon return. Finally, a trophy bull’s antlers are an average of 55 inches tall by 46 inches wide. They are essentially a small tree. Strap a small tree to your event horse’s back and see how far you get. 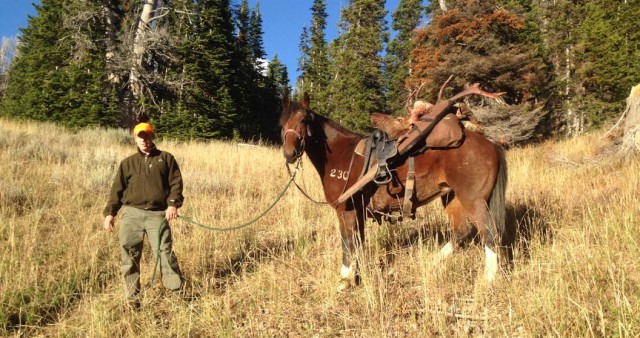 Packing out a bull

As if their sheer strength and tenacity weren’t enough, I was also impressed by these horses’ attitudes. While some were spookier than others (I mean, she did spook at a giant moose. Standing directly in front of her. In the dark.), and some tested their greener riders (Actually this was all the same chestnut mare. Surprise!), most of the horses seemed happy to be out there doing their jobs.

Even after five or six hours of steady climbing, these horses never got cranky or lazy, and were happy enough to take a quick 20-minute grazing break and a couple sips out of a stream before continuing on. And once we got back to camp, all they required was a quick groom before turning back out into their corral for the night. No ice. No poultice. No nothin’. 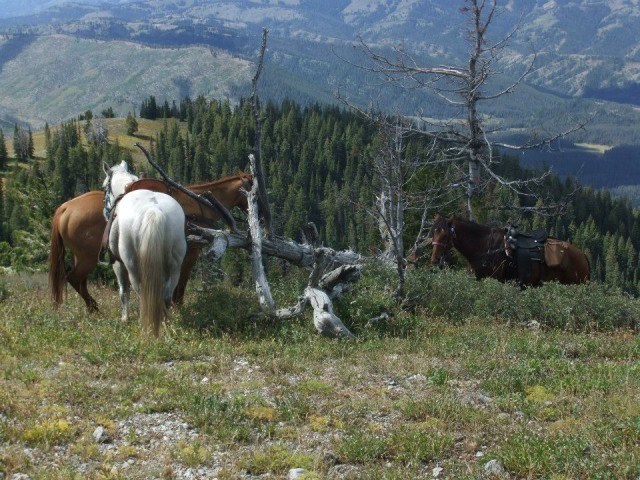 The horses were of indistinct breeding and they certainly weren’t pretty. They didn’t demonstrate acceptance of the bit, elasticity of the steps, suppleness of the back, or engagement of the hindquarters. They didn’t propel themselves over countless fallen logs with any particular grace or style. But they were sound and sturdy and they tackled their jobs with the dedication and professionalism we all expect from our own horses.

The Old West is not lost. The working horse may have become outmoded with the invention of the steam engine and the automobile, but he never became obsolete. Out West horses are still used for many of the things they were 100 years ago.

The Bucking Horse and Rider, which dates back to 1918, is the state symbol of Wyoming—the “Cowboy State.” During my week in Wyoming I saw more cowboys and their horses than I did cars. You could drive in to the city of Alpine to buy a saddle, but not a pumpkin spice latte. 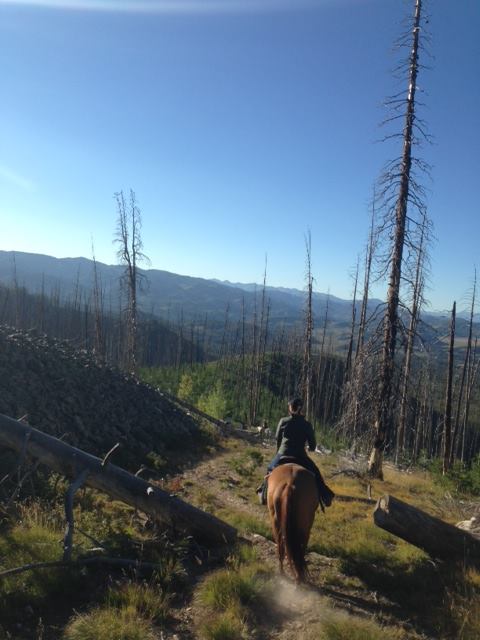 Thats me. Riding off into the sunset.

Although I can’t say I wasn’t excited to return to Maryland for the fall event season, I can say that my experience in Wyoming was an educational one. Not only did it force me to broaden my horizons by participating in a new type of riding with a new type of horse, but it allowed me to really appreciate these awesome horses—horses who I had initially dismissed as “just trail horses.”

I can’t wait to go back.