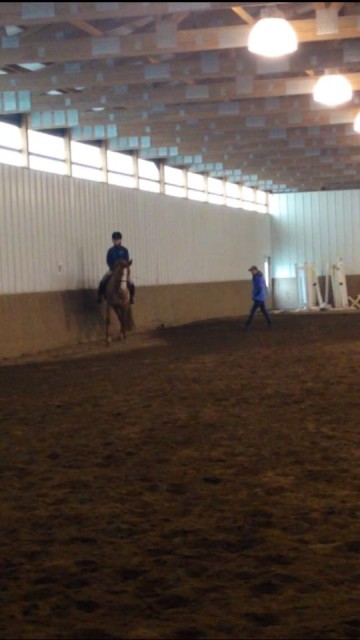 I’ve had a trainer since the day I started riding. I grew up in a great barn with two highly qualified trainers, one who specialized in dressage, the other in jumping. I learned from these two women, who helped me grow up and taught me responsibility from day one.

I moved on to college and joined the IHSA team at school, where once again I had a great coach who emphasized softness and proper equitation. Side note, I am not and don’t know that I ever will be a “pretty” rider. But I’m ok with that.

After college, I moved back to St. Louis and added a couple of new trainers to my list of people I’ve learned from. I’ve always had at least a lesson a week since the time I began riding, sometimes two if I was training for a competition.

I moved to Kansas City this winter and found a trainer here and, as you know, started spending time with a cute gray mare named Isis.

This past week, I ventured out to the barn for my first ride on my own in several years. This sounded crazy to me when I said it in my head, but then I realized that my horse was about three years removed, and that would have been the last time I rode on my own, without a lesson.

As soon as I came to this realization, I connected the unusual nervousness in my stomach with some subconscious anxiety that something bad was going to happen. I was going to fall off, or Isis would decide today would be the day she’d rear and buck and do every other bad horse thing possible.

“What if I screw her up?,” I found myself thinking. I thought ahead to jumping her around a course or taking her cross country schooling, and immediately thoughts clouded my head about not being good enough and getting taken off with across country with no semblance of control.

When I take a lesson, I find that I am much more confident than when I ride on my own. Add to this scenario the fact that it’s been so long since I’ve ridden outside of a lesson, and it compounds this weird need for validation. It’s as if I don’t feel I’m a capable enough rider without someone on the ground telling me what to do.

I thought back to all of the time I spent with my horse riding on my own. We learned a lot during those rides, perhaps even more than during our lessons because we could really focus on what the other was trying to say.

So I got to thinking about this sense that I’m incapable of riding (well, riding and being productive and correct) without a trainer’s eyes on me. Did it come about from the past three years of no “independence,” or was it bred into me from 15 years of working with trainers?

Don’t get me wrong, my trainers were all instrumental in my riding education in their own ways, and I will always be a firm believer in having a good trainer by your side. But when do you draw the line between relying on your trainer to tell you when to put more weight in your heels and being able to do everything on your own?

At some point in time, we all have to become at least a bit independent. What happens when your coach has ten other students at a show and is unable to make it to warm you up for show jumping? That happened to me at an event one year, and guess what? I completely bombed my way through my course. Was it completely because my trainer didn’t warm me up? Probably not, but it certainly got in my head and caused me to over react to small mistakes.

So with this new horse, my new resolution is independence. I can confidently say that I am a capable enough rider to know that I’m most likely not going to get bucked off or run away with, and that I am just as able as most to find a good canter and, therefore, a good distance to a fence. I can do leg yields and I can get my horse on the bit. I can shorten and lengthen her stride between canter poles.

Eventually? I’ll be able to jump her around a course or warm myself up for a dressage test. Do I still want my trainer there to help me? Of course. As a lower level amateur, I know I need the help. But do I want to be able to have enough confidence in my own abilities to know that no coach doesn’t necessarily equate to a problem? Most definitely.

They say that riding builds character, and if I look back on my life, I would say that needing validation is something my mind has always struggled with. Perhaps this is the first step towards realizing that I can be confident on my own without needing as much approval from others.