Area V Young Rider Katie Resnick has been selected to represent the United States in the dressage competition at the 2015 European Maccabi Games in Berlin this summer, and we are excited she has agreed to blog about her journey! Meet Katie and Amanda Katsman, her teammate and best friend, here and read on for her recap blog on her experience at the Maccabi Games this year. You can also read her first blog for EN here. 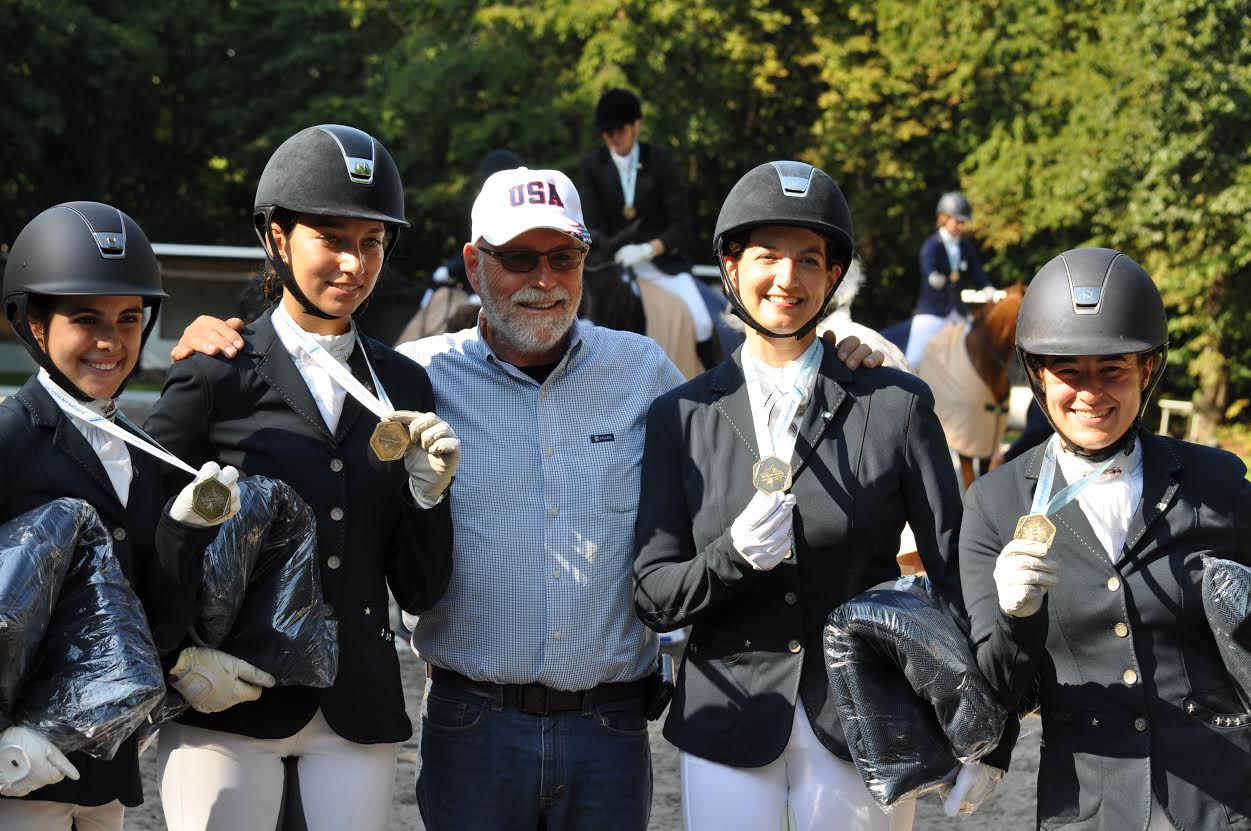 Guten Tag! My name is Katie Resnick and I am 19 years old and from Dallas, Texas. Soon I will continue my education as a sophomore at Texas A&M University studying psychology.

This summer I embarked on the most amazing adventure of my life. I traveled to Berlin, Germany where I was one of four equestrians representing the United States at the 2015 European Maccabi Games. A little over a month ago, I wrote an article about being chosen for the team and my excitement for The Games. Now I come to you with a different perspective, having completed the Games as successfully as one could hope for, bringing home a team bronze and an individual silver medal in the dressage competition.

This was the first time the Maccabi Games had ever been held in Germany. As one of our Team USA Chairpersons said, “We are making a strong and significant statement by being part of the largest gathering of Jewish people in Germany since the Holocaust.” The 2015 Maccabi Games will forever be a milestone in Jewish History.

The Opening Ceremonies symbolized a movement into a new era, especially for Jews in Germany. Country by country, approximately 2600 athletes, coaches, and delegation heads marched into a stadium built by the Nazi regime. Adjacent from this stadium was the grand Olympic Stadium, where less than 80 years ago Hitler had banned Jewish athletes from competing in the 1936 Olympic Games. As you can imagine, this was a very touching experience for everyone.

The moment I will never forget is marching down into the stadium, holding the American flag with pride. The stadium was so loud I could not hear myself think. I tried my best to take in the whole experience – the sights, the sounds, the electric energy. The feeling of pure joy is something I will always remember. And although the picture is blurry, the screenshot by my aunt from the live stream on the computer perfectly displays everyone’s excitement. Next to me are fellow teammates, Anna Jaffe and Amanda Katsman. 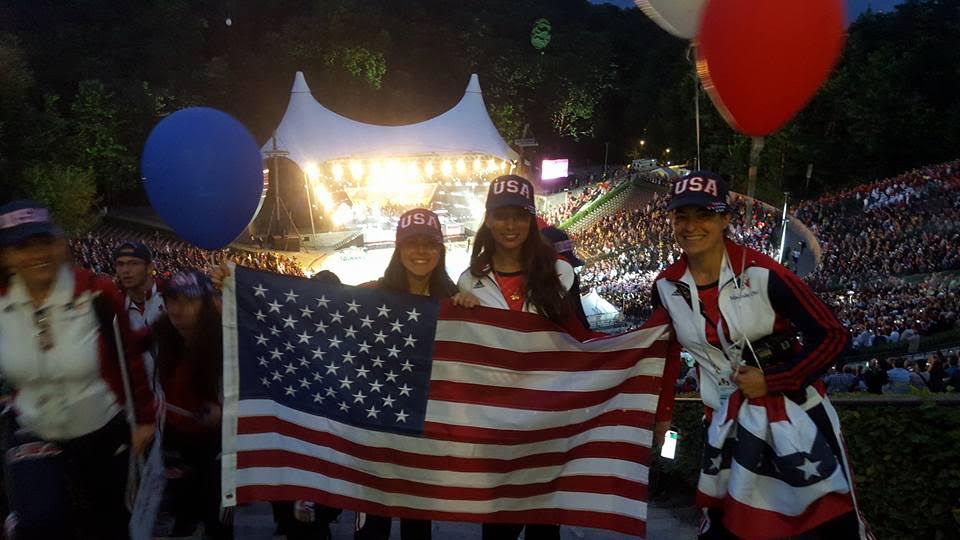 Team USA at the Opening Ceremonies. Photo via Katie Resnick.

Of all the sports taking place, dressage was one of the last ones to compete. This was advantageous for Team USA, because each of us had “borrowed horses,” meaning we did not own and were not familiar with riding the horses we would soon compete on.

Therefore, we used these extra days to get to know the horses. Originally I had planned to compete on a horse provided to me by the Maccabi Games. However, Anna Jaffe, the Team Captain, found me the perfect partner in crime via YouTube and through a friend’s contact.

Instead of having one 45 minute ride if the horse were to be provided by Maccabi, I had six days to ride my pony for as long as I wanted. Yes, I mean pony. Now, please meet the one and only, Elmholt’s Neptun.

Neptun, or Nep for short, is a 15-year-old, New Forest Pony standing 148 centimeters tall. He is a top FEI pony from Denmark and was the Norwegian Pony Champion in 2010. While he may seem small, his personality is big, and it is beautifully displayed by his stunning movement once he hits the dressage ring.

As riders, we know it takes about a year to truly get to know your horse. And six days certainly was a challenge, but I was ready. With the help of internationally renowned dressage trainer, Ron Postleb from New York (who is Amanda’s full-time coach), I was able to learn and understand how to ride Neptun effectively. 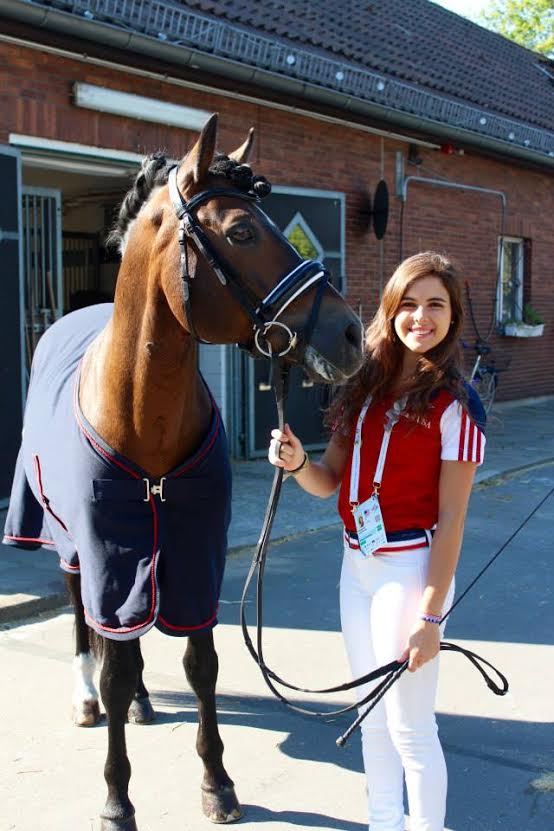 My eventing background served me well, because I was able to be versatile and quickly learn new aids to ride Neptun successfully. From nearly jumping out of the dressage arena during our first ride, to putting in a lovely test to win the individual silver medal on the final day, Neptun and I came a very long way. Riding him was an honor, and I was able to get a glimpse into what true dressage is.

Day one of the Dressage Competition was the Team Competition. Every rider rode the same test, the FEI Medium Dressage Challenge Test. Then, the team with the most points, after dropping their lowest score, wins the competition. Team USA all put in competitive tests in a field that included professional riders from around the world.

The Netherlands and Germany brought their top horses, some of which had competed at the Grand Prix level. It has always been a dream of mine to go watch the World Equestrian Games in person, and seeing the caliber of these horse and rider pairs made me feel like I was watching dressage at WEG.

Being only the second time ever in the Games, the Dressage Competition was truly top notch, just as an international competition should be. Riders from Israel, the Netherlands, Germany, Denmark, Hungary, Spain, Australia and the USA all competed.

At the end of the Team Competition, The Netherlands swept the top of the standings, and their gold medal was well deserved. Germany had two teams competing, and Germany Team 1 took the silver medal. With scores of 72.5%, 69%, and 68.5%, putting Amanda in 7th, Sandra in 8th, and myself in 10th place, respectively, Team USA proudly took the bronze medal.

Amanda and Sandra’s horses were also borrowed from Germany, so with both of them only having a handful of rides before the competition, you can imagine how ecstatic Team USA was with our result.

The next day was the Individual competition. Amanda and I both rode the medium level test again, and Sandra and Anna rode the advanced level test. Nep and I were the second ones to go, and again we put in a lovely test. But, never in a million years did I think that I, the 19-year-old eventer who originally did not get picked for the team and was given a second chance, would ride a test worthy of the silver medal. 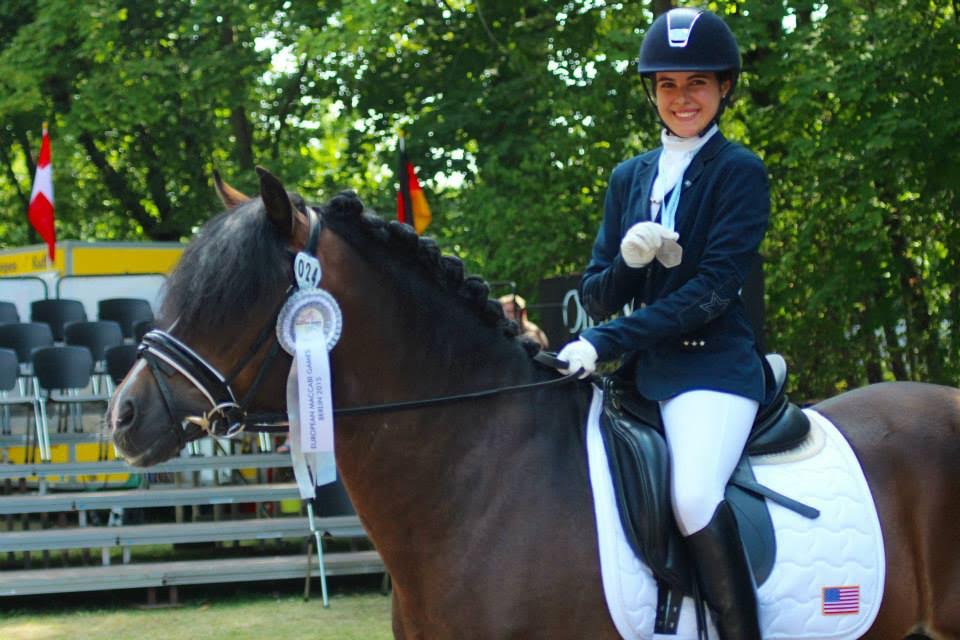 And that is the beauty of the Maccabi Games. While the competition was important, The Games were more than just winning a medal. They were about being in Berlin, making new friends from around the world, representing my country, riding the cutest and fanciest pony ever, being on a team with my best friend, becoming closer to my religion, and being a part of an event that defied a dark time of recent history.

These were all aspects of the Maccabi Games that made it the most amazing experience of my life. I learned as much in the saddle as I did out of the saddle, and winning the bronze and silver medals were icing on top of the cake.

As I write this article, roughly two weeks after the Maccabi Games have ended, I sit here and think about my experience and how I want to do it all over again. In 2017, the Israeli Maccabi Games will be held throughout many cities in Israel, and I am eagerly waiting to fill out my application.

The 2015 European Maccabi Games were truly an experience of a lifetime. I am so grateful to my parents, friends, family, trainers, and the Maccabi Games organizers, coaches, staff, crew, and everyone who supported me and made The Games possible.

Never did I think that the words, “Dressage is fun!” would come out of my mouth, but I left The Games repeating those words, and I finish this article, by saying, “See ya in Israel in 2017!”