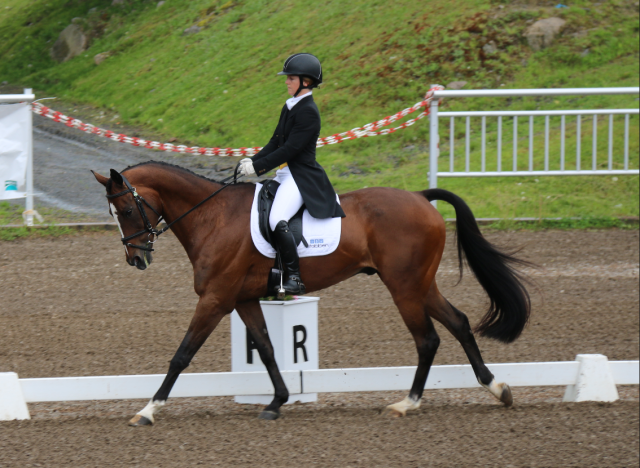 The Oxford English Dictionary, the definitive historical dictionary of the English language, dates the first use of the noun scribe to 1377, and its first use for someone who “writes at another’s dictation” to 1513. Though reference to the first use of the term scribe in dressage eludes me, I would guess that it dates to the Olympics of 1912 and simply merits no special mention in equestrian history.

In any event, current USEF Requirements for Dressage Competition Management provide regulations on Scribes (DR126); the USDF Guide for Scribes provides five pages of detailed guidelines for scribes; and USEF/USEA licensure requirements mandate scribing as a prerequisites to becoming an “r” judge. Many blogs offer personal accounts of scribing for dressage.

Scribes occupy a low niche in the dressage hierarchy — far lower than judges, though perhaps higher than bit-checkers. That status simply confirms the basic principle: a scribe takes dictation — no more and no less. As one upper level judge succinctly puts it: “A scribe’s opinion on the competitors does not matter.”

So why scribe? Why volunteer for what appears to be a purely mechanical task? The most obvious reasons are to serve the equestrian community, to gain insight on horsemanship, and, in theory, to enjoy an excellent vantage on tests being performed (in practice, a scribe might glance up from the score sheet to confirm a movement).

A less obvious reason, though a critical one, is that scribes typically also ride, and riders typically revere the art of dressage and want to help, in however small a way, to preserve it.

Whatever a scribe’s motive, his or her charge is to work, not to talk or tan — or, more precisely, to support the judge’s work. And though the rigorous protocols for the training and licensure of judges ensure a high level of competence, judges themselves vary in seasoning.

In my experience, veteran judges confident in their eye and knowledge speak crisply, clearly, and authoritatively and rarely second-guess their scores. They set and sustain a clear rhythm, and they want a scribe to follow it, listen closely, and record accurately.

Novice judges still growing in professional confidence occasionally ramble, mumble, hesitate, or revisit scores, resulting in an erratic rhythm. They sometimes want a scribe to act as sounding board, and often need one to serve as editor. Whether veteran or novice, however, all judges with whom I’ve worked have been consistent and evenhanded scorers, as well as knowledgeable and gracious individuals who enjoy horse talk.

Since dressage is integral to eventing, horse trials need scribes. Anyone scribing at USEA Area II horse trials — particularly in the Southern Pennsylvania-Maryland-Northern Virginia latitude — enjoys an enviable boon: the ubiquity of Olympic, four-star, and other top-tier event horses and riders.

You can’t swing a cat at an Area II horse trial without hitting a Phillip Dutton or Sharon White, one of Boyd Martin’s or Colleen Rutledge’s multiple entries, or the latest young human or equine phenom. Not surprisingly, the quality of judges is commensurately high, whether veterans with decades of judging (and training and competing) behind them, or novices ascending the ranks of judging (and training and competition), and looking toward decades of judging ahead of them. Top horses under top riders before top judges — Area II is scribe’s heaven.

I began scribing at Pony Club rallies and local schooling shows many years ago, and now volunteer mainly for recognized horse trials at Waredaca, the eventing venue in Maryland where I board. While continuing to scribe for the dressage phase at these horse trials, I’ve more recently also been scribing for conformation judging in the USEA Young Event Horse and Future Event Horse competitions. 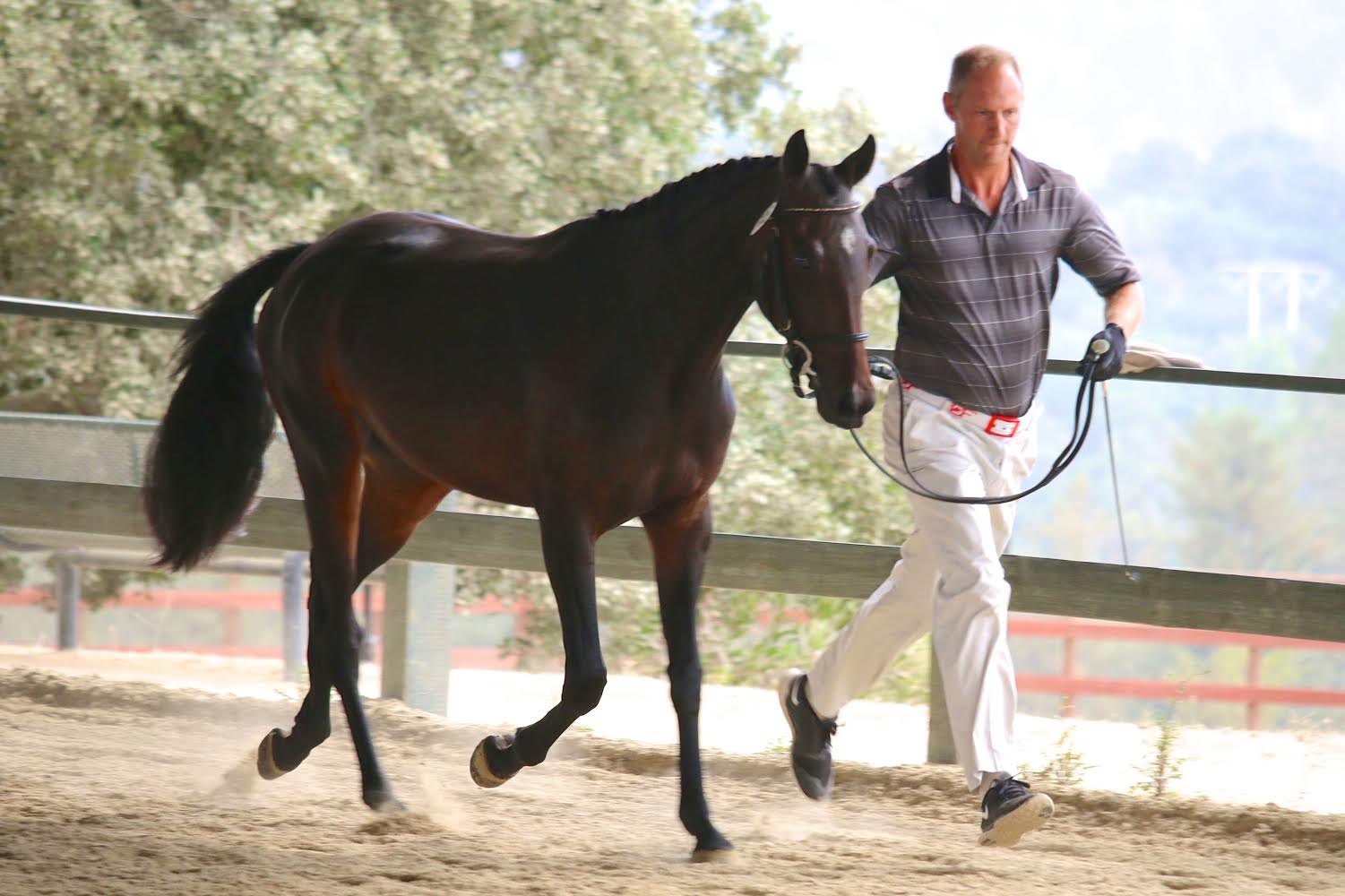 What exactly is YEH and FEH competition? USEA characterizes its well-established YEH Series as an “equine talent search” to identify horses with the potential to excel at the highest levels of international eventing. In YEH, four- and five-year-olds compete in three phases, each phase judged and scribed: 1) conformation and type, 2) dressage, and 3) jumping test/gallop/general impression.

USEA more recently established the FEH Series as a “pre-cursor” to YEH with the same goal of identifying upper level event prospects. In FEH, yearlings and two- and three-year-olds compete and are judged in one phase only: conformation (for type) and correctness of gaits. (A third competition, the New Event Horse, repurposes the YEH format as an introduction to eventing “for horse and rider.”) Full details on the three “young horse programs” are given here.

USEA prescribes the conformation test for FEH in some detail. It comprises four distinct steps: the horse walks a 15-meter triangle and trots a 30-meter triangle (the first triangle is set within the second to form a shared apex, where the judge stands); the horse also stands for “inspection” prior to the walk and again for “final review” following the trot.

The judge provides evaluations and scores for each of the four steps, and can ask handlers to repeat the walk or trot steps in part or whole, or can prolong the standing steps. USEA guidelines for the conformation phase of YEH competitions indicate that handlers will walk and trot horses “in a straight line for soundness and correctness.”

Judges at Waredaca (and I presume elsewhere) typically offer handlers in YEH classes the choice of walking and trotting a simple out-and-back line or the lines of the FEH triangles (since they’re already set up) Handlers, to show their horses to maximum advantage, generally choose the latter.

YEH and FEH Series conformation tests differ in exact scoring criteria, but they share two basic challenges for a scribe — one to listening, the other to recording. First, the judge needs to walk around the horse to inspect it and move around the judging area to evaluate the walk and trot, so the scribe, at least for some judges, must manage simultaneously to remain within earshot, record comments, and not distract horse or handler, and not invite a kick from an unruly youngster.

Second, the judge needs to employ anatomical and not easily abbreviated terms to address the test criteria accurately, so the scribe, again varying by judge, must know this vocabulary in advance in order to record the judge’s comments quickly and not waste time puzzling over their intended meaning.

A judge’s particular style in approaching the test, put differently, largely determines a scribe’s particular challenges. Here are two judges — actually composites of judges for whom I’ve scribed — with very different styles. One judge comments continuously, and in great detail, throughout each step of the test, and across all four steps, requiring her scribe to write nonstop, while in motion, and to squeeze lengthy comments legibly into small spaces on a score sheet.

The other judge holds her comments until all four steps are completed, and also uses broader strokes, making her scribe’s listening and recording tasks easier, though perhaps less instructive. While these judges differ in style, however, they both provide invaluable information to the handler and owner, and, most important, for the horse.

In any case, the scribe’s role is to adapt to judging styles, not to advise on them, and if you are lucky, as I have been, you will be scribing for knowledgeable, exacting, and diplomatic judges and will be responding only to differences in kind, not in quality.

Because scribing for YEH and NEH conformation is so close-up, it offers two signal rewards: 1) the opportunity to encounter, with a tutor, not only a few stunning upper level event prospects—the equine stars of the future—but also many horses destined for fine careers in lower levels or in other disciplines; and 2) the opportunity to learn, from that tutor, about conformation, a singularly important and very nuanced area of horsemanship.

Scribing also provides the opportunity to observe an equine professional managing both horses and horse people. Given the nature of young horses, entries might behave calmly, obstreperously, or both, and USEA, with some understatement, cautions judges not to mark them down for “displaying a little exuberance.”

Given the goals of the competition, most handlers are composed and practiced professionals, but many are nervous first-time amateurs. And given the close quarters of the testing, handlers of either type are often within earshot of the judge. A good YEH or FEH judge, like a good rider, must have patience and tact to spare. A good scribe borrows the surplus.