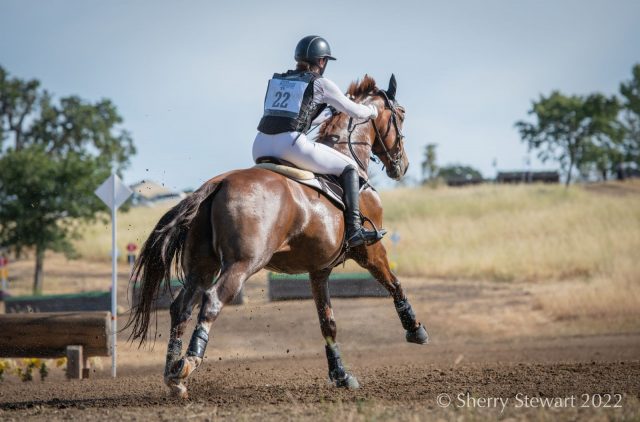 Grace Walker Alonzi and Frantz kick on for home on cross country at Woodside earlier this year. Photo by Sherry Stewart.

Worry for another lost event rippled through the Area VI community late last week on social media as news spread that Robert Kellerhouse’s Woodside Eventing would no longer be organizing events at Woodside Horse Park in California. However, the Bay Area facility, which also plays host to recognized competitions in other disciplines such as hunter/jumper, reining, and vaulting, has confirmed that it plans to still host events going forward.

Kellerhouse Presents/Woodside Eventing had organized three-day events, including the popular annual Preliminary Challenge and international competitions up through CCI4*, multiple times each year dating back to 2004; the venue has hosted eventing competitions for nearly 40 years.

“It is with a heavy heart that we advise that our time at the Horsepark at Woodside has come to a close,” Robert wrote in an open letter announcing the change.

For their part, Woodside Horse Park has indicated that they were notified of the partnership dissolution at the same time as Robert’s statement was published. “Notification was provided to us in parallel with a social media post,” a letter, sent to Horse Park members on the morning of June 24, reads. “Woodside Eventing’s unilateral decision and subsequent announcement do not reflect our deep commitment to quality eventing offerings on the West Coast.”

Robert noted that facility improvements, particularly on the cross country tracks, were needed in order to continue hosting quality events. “While in the past we have made these long term investments, we have done so with the backing of the Horsepark through the length of time we were provided to operate,” he explained in the letter.

Steve Roon, Executive Director of Woodside Horse Park, confirmed that the venue is currently working to secure its own licensing to host USEA and USEF-recognized events (Robert Kellerhouse had previously held the license to run the event at Woodside, and has subsequently applied to use that license for an August Horse Trials at Galway Downs).

In the letter sent to Horse Park members, the facility’s Board of Governors explained the intention to continue hosting events at the facility, which is also home to trainers and competitions from a wide range of other equestrian disciplines. Steve stated that the Park management is currently working with Area VI, USEA and USEF leaderships to obtain its own license to host the originally approved August 12-14 and October 6-9 Horse Trials. “The Horse Park is committed to providing eventing competitions at Woodside in 2023 and beyond,” he said.

Steve also addressed concerns about cross country footing, as noted in Robert’s statement as well as in a few comments from riders on social media. Steve indicated that designer and builder Bert Wood would be returning to work on the course at Woodside for events going forward and was confident that the footing issues will be mitigated. Many of the issues, he explained, stemmed from a mixture of soil types along with some changes to how the ground was managed leading up to the event. Bringing Bert back, he said, will enable the Horse Park to provide an excellent cross country experience.

“I appreciate the time we were provided by the Horsepark Board and its presidents. I am forever grateful to the 20,000 starters we have hosted throughout our 18 years’ time in Woodside,” Robert concluded in his letter. “We could not have done so without the support from the teams we have in the office, XC/SJ design and build, show operations, competition safety, special event prep and planning, sponsorship and last but not least the amazing volunteers at Woodside. You all have been instrumental in our success.”

The latest update provided by Woodside Horse Park can be found here.

This story is ongoing and we will continue to follow up on this to provide more updates as they are made available.