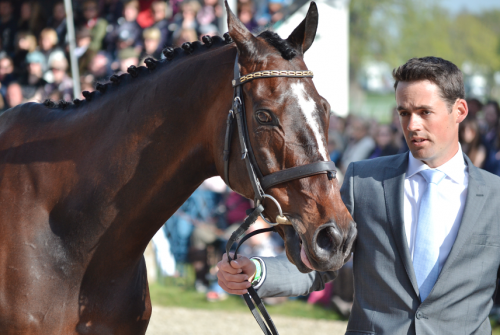 A week ago, the Eventing world was rocked by the news that our 2013 golden boy, Jock Paget, was in trouble with the FEI. His Burghley and Badminton winner, Clifton Promise, has tested positive for a banned substance known as Reserpine, which acts as a long-acting sedative. Another horse owned by Frances Stead from Clifton Eventers, Clifton Pinot, also tested positive. As a result, both horses, Jock Paget and Kevin McNab have been suspended from competition immediately until the results from the “B” sample are returned.

Clifton Eventers (click here to follow them on Facebook) has launched a full scale investigation into the matter, and completely stand by the innocence of their two riders. They are posting weekly updates on their progress in the matter, and are being extraordinarily up front about the process. From their first week update:

“We immediately stated categorically that none of the relevant parties involved with these horses, including ourselves and both riders, had taken any actions with the intent of administering any prohibited substances. This position and statement will not alter at all in the future, as it is a fact that time cannot change.

In the days that followed the original announcement many people have contacted us and the riders to express their support at this difficult time. I would like to express my sincere thanks to them all. The fact there is such a groundswell of goodwill towards us is very much appreciated.

Obviously after the shock and disbelief of the initial news, we knew we had a big task on our hands to prove both riders’ innocence, and since then the team has been working tirelessly on that objective.

The start point of the FEI’s policy is the opposite to normal law process – effectively both riders (as the ‘person responsible’ for each horse) are ‘guilty until proven innocent’, rather than the usual ‘innocent until proven guilty’. Therefore, if it is confirmed there was Reserpine in the blood of these two horses, the onus is on them to prove how it got there. With this as the start point, we have already commenced many avenues of investigation:

1) We have asked the FEI for the level of Reserpine in the horses’ ‘A’ sample blood. This was not in the information from them advising that the substance had been found. Whilst we accept that this is a banned substance under FEI rules at any amount, knowing the relative concentration is particularly important to help us understand how and when it might have entered their systems.

As a comparison, think about ‘drink driving’. With highly sophisticated diagnostic analysis, such as is used by the FEI for its testing, it is likely the presence of alcohol could be detected in anyone who had drunk a single glass of wine or a pint of beer more than a week earlier. This would show up as positive under a ‘zero tolerance’ evaluation of alcohol. However, the same result of ‘presence of alcohol’ would show up if the person had consumed two bottles of wine or eight pints of beer a few hours earlier. Knowing which of these two extremes the alcohol reading showed would certainly help in finding the full story of any drink driving incident. Reserpine is a ‘zero tolerance’ substance with the FEI, so any level found, however small, would lead to a positive finding.

2) We have employed an expert scientist to help analyse the various sources of possible contamination that we have identified. As those involved with high level equine athletes will know, they take a great deal more into their bodies than just grass! As a result, this is a very expansive and complex exercise, and even then it is probably impossible to cover every possible source, but we hope to cover as many as we can and as thoroughly as we can.

3) A week ago, none of us had actually heard of Reserpine, let alone knew anything about it. However, we are becoming increasingly knowledgeable by the day. To this end, we would like to thank all those of you that have sent us information about this substance. Reserpine is a very long acting sedative. It remains in the body for weeks if not months (scientifically it has a half-life of 11 days). It’s in commonly-found grassland and hedgerows plants in the UK, and so it could be grazed naturally or get into hay. It is also apparently used in several human medications, allowing the possibility, for example, that a person using one of these could have contaminated the horses indirectly and unintentionally.”