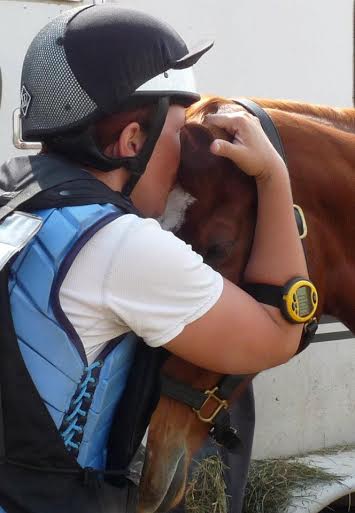 It was a beautiful January day, even for Aiken. Full Gallop was sunny and warm, and the parking lot was packed with competitors there to get 2016 off to a great start. I had competed Win the War, aka Bug, in the Intermediate earlier in the day to a third place and top OTTB, and I had just completed my young horse’s second Training, ending on his dressage score. I was beaming from ear to ear and feeling pretty great about how the year was starting.

My young horse, Bishop de Selah, is a phenomenal athlete and a quirky guy. He is not malicious in any way, but we call him the “grey squirrel” for a reason. He seemed pretty chill and was standing quietly tied to the trailer after his cross country run. He was untacked, and I was hot. I decided to take my helmet and vest off before taking him for a shower.

That is the last thing I remember before waking up on the ground surrounded by a lot of faces.

From what I can gather, I must have bent down to take off his hind boot about the same time that he spooked or I touched a sore spot. I can sit and ruminate on it for hours, but my brain won’t divulge the answer, so I will probably never know. What I do know is he kicked the side of my left arm where the humerus head goes into the shoulder.

The force of it broke my collarbone, most likely popped my shoulder in and out of socket, and then bounced off the top of my head. I am not sure how long I was knocked out, though I am sure it was a decent amount of time. I had blood coming out of my head, and a lot of pain in my left shoulder/collarbone when I awoke.

As soon as I woke up, I was completely lucid besides not knowing what the heck was going on. I knew where I was, why I was there, and I could rattle off my husband’s brand new phone number with ease. The two things that popped into my head as I was lying there were:

1. How the heck am I going to get Bug to Wellington for the Showcase?
2. My collarbone is broken and there is no way I will be able to go to Rolex!

I was more upset about those two things than much else. Once the EMT assured me that I wasn’t dying, that’s all I could really think about.

Fast forward to a few days later. My truck is a manual transmission, so I was stranded in Aiken with no way to go anywhere without help. I was beyond heartbroken about my accident and thus, my plans for Rolex being shattered.

All I wanted to do was figure out a way to get Bug to Wellington for the Showcase. If I couldn’t ride him, I wanted to be able to watch someone else do it. My very good friends, John and Kim Sigmon, came to my rescue. John brought Kim down to Aiken, and she and I set off on a great adventure.

After watching Dan Jocelyn with Bug those few days and being hopped up on a lot of pain drugs, I began the difficult mental journey of deciding just how I wanted to approach the rest of the year. Dan was very kind and did an excellent job with my boy.

Many think Bug is quite easy when they watch him go, but in reality, he is extremely intelligent and loves his job almost to the point of being unrideable at times. He will be quiet and almost hunter­like in the warm up and will go into the arena and be a completely different horse. It was educational and fun to watch Dan deal with Bug, and it was definitely a bit of a confidence boost to see that Dan dealt the same issues that I do.

While watching, I kept coming back to the same question. Do I skip Rolex completely this year and shoot to take him myself next year, or do I find a category A rider willing to compete him this spring and take him?

I have had Bug since he was a 4-year-old off the track, so we have been working together for coming up on 11 years. He and I know each other inside and out, and he is a ridiculous mama’s boy. He constantly kept an eye and ear on me while Dan was riding, just to be sure I was paying attention and approved. He is my heart horse and the horse of a lifetime.

My heart wants so badly to be the one to take him around Rolex for the first time. I want to feel that amazing boy run and jump over the biggest track in the U.S.

However, my mind kept poking my heart. I am not oblivious to the naysayers. There are many out there who think that Bug does all of the work, and I just sit up there for the ride. I am also quite aware that Bug will be 15 this year, and with horses, everything is a ticking time bomb. What if something happens to him in the next year? I KNOW that he is a four star horse with all of my heart and soul.

Do I risk him missing what I truly believe he is ready and made to I talked with a few people outside of my inner circle about my emotional hemming and hawing and even went so far as to talk with Dan about possibly riding Bug at Rolex. I wanted to get the opinion of some people that were not really emotionally involved with Bug and I.

Dan said that it was obvious Bug had what it takes to do it, but he had some concerns about who was going to keep him going and competing while he was in England. Obviously, his concerns were legitimate. Did I really want to pass Bug from rider to rider just to get him to Rolex?

Knowing Bug as I do, I just didn’t think that would be something he would like. However, my mind wasn’t quite ready to let go of having someone else ride him. I made the decision to call Clayton Fredericks. I have ridden with him enough times that he understands Bug and I, and he happens to be a Category A rider.

Obviously, he is coaching Canada, so I wasn’t really optimistic that he would be able to take him on himself, but I wanted to run my dilemma by him. I needed someone who knows us, but who is outside of my normal circle enough to give me an opinion.

I will be forever grateful to Clayton for his words of wisdom that night. In a nutshell, he said that he was sure lots of people would jump at the chance to take Bug around Rolex. “He’s an amazing horse. However, what makes Bug special is his bond with you. Why would you let someone else take this horse around his first four star? You have been working with him for 11 years, and you have made him. You are more than good enough to take him. Bug wants to go to Rolex with you.” Of course, I got all teary and thanked him for his words and time.

Even after making the decision that I would wait and take Bug myself, I still found it very difficult to actually type out the announcement for all of the people on FB that kept asking, “Will you still be able to go to Rolex?” Bug has a very big fan club all his own, and many people were excited to watch us go. However, actually typing out the words was difficult. It felt like my dream was hanging in limbo once more, as so many things can happen from here to there.

Those of us whose hearts beat in time with our horse’s hooves understand the passion and drive that fuels us forward in this inherently risky sport. We knowingly take the risk that our dreams could be shattered, our bodies injured, or our lives lost at any second, and yet, we ride on.