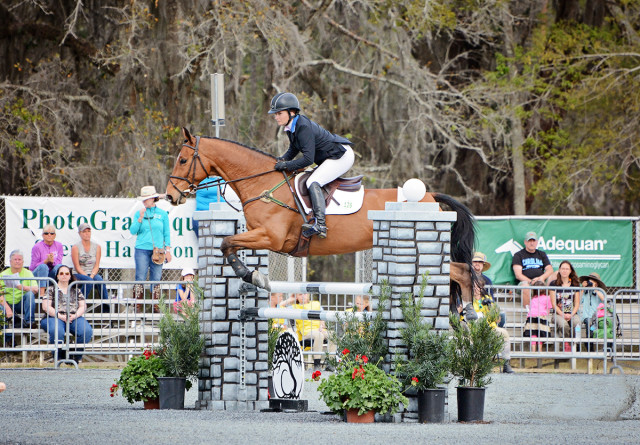 With such a tightly packed CIC* leaderboard following cross country at Red Hills International Horse Trials, show jumping rails proved to be very expensive today. Hannah Sue Burnett and Alonzo III did not have a rail in end when they entered the ring to jump Fuzzy Mayo’s course as the overnight leaders, but they easily delivered a lovely double clear round under pressure to clinch the win on a final score of 41.9.

It’s the second year in a row that Hannah has won the CIC* at Red Hills, as she also finished first last year with Jitter Bug, but this year it was Alonzo’s turn in the spotlight. An 11-year-old Dutch gelding owned by Mary Ann Ghadban, Alonzo (Indoctro x L Ronald) has been slowly recovering from an injury sustained at the end of 2014 prior to coming into Hannah’s barn.

The horse is quite experienced, having finished fifth with Vicky Tuffs in the 7-year-old British Eventing Young Horse Championships at the CIC2* level in 2012 before later being imported to the U.S. as a ride for Sharon White. Since moving on to Hannah’s program, she’s slowly brought him back into form, with Red Hills being his first major competition since the injury.

“He’s a really cool little horse,” Hannah said. “He’s adorable and he has such a cute personality, and he steps up to the plate so much. He surprised me by doing such a good (dressage) test. With cross country he just pinged around — he loves it. He’s so excited about all the jumps, and he loves the crowd. He’s also a great show jumper.” 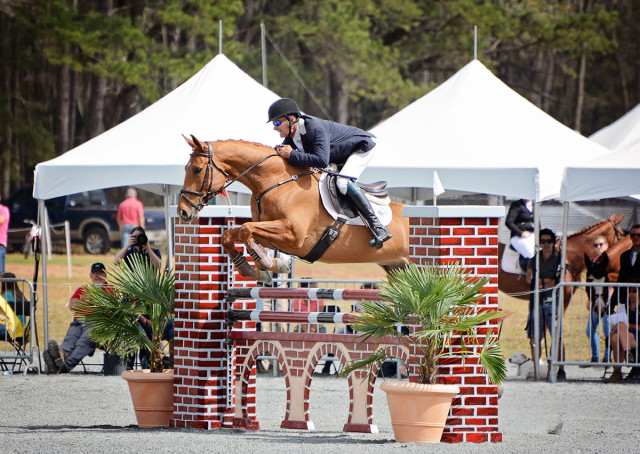 Hannah and Alonzo were sitting in second place after dressage on 41.9, and they moved up to take the lead yesterday thanks to a clear round inside the time on cross country. Hannah has been working diligently on her show jumping with U.S. eventing team show jumping coach Silvio Mazzoni, and Alonzo’s double clear round today clinched the win on their dressage score.

“To ride he’s a little firecracker,” Hannah said. “He really understands the phases. For cross country he’s all excited and really wound up and wants to be out there, but for dressage he’s really quite easy to ride. You just hold the reins and steer him around. I just love him.”

Mike Huber and Russell’s Reserve jumped a lovely double clear round to ultimately finish in second place on their dressage score of 44.7. This pair started the weekend in 10th place after the first phase and moved up to fifth yesterday after going clear and inside the time on David O’Connor’s new CIC* cross country course. 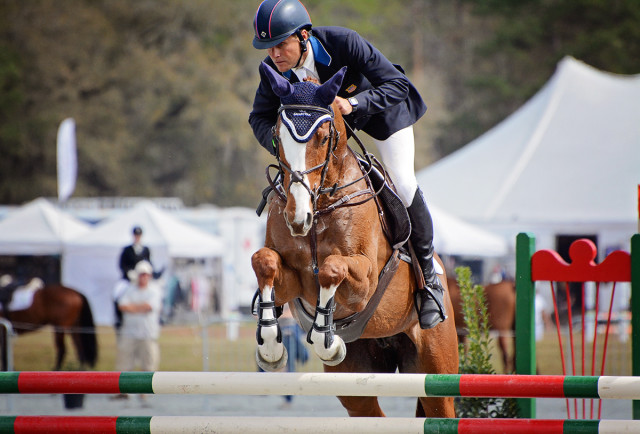 Boyd Martin and Santos led the 59-horse division after dressage on a score of 41.6, and they slipped down to sixth place following cross country after accumulating 3.6 time penalties. A double clear show jumping round today bumped them back up to finish in third place on a final score of 45.2.

Santos, a 7-year-old Thoroughbred gelding by Athlete and owned by Gloria Callen and Ron and Densey Juvoven, has made an appearance in EN’s Got Talent and completed his second FEI event this weekend at Red Hills. The horse bears a striking resemblance to another fiery chestnut Thoroughbred in Neville Bardos, Boyd’s famed upper-level partner and 2012 USEF International Horse of the Year.

“He has very flamboyant movement for an off-track Thoroughbred, and he’s really starting to mature and stay focused, which has been our biggest challenge over the last 12 months,” Boyd said after their test. “I think a lot of this horse, and he’s been at this level for nearly a year. He’s been a bit of a handful to get going, and I feel like we’re just starting to get on the same page.”

Stay tuned for more from Red Hills as we wrap of the Advanced and CIC2* divisions later this afternoon, and be sure to catch up on all of EN’s #RHHT coverage at this link. You can also view a slew of photos and videos from the weekend on EN’s Instagram. 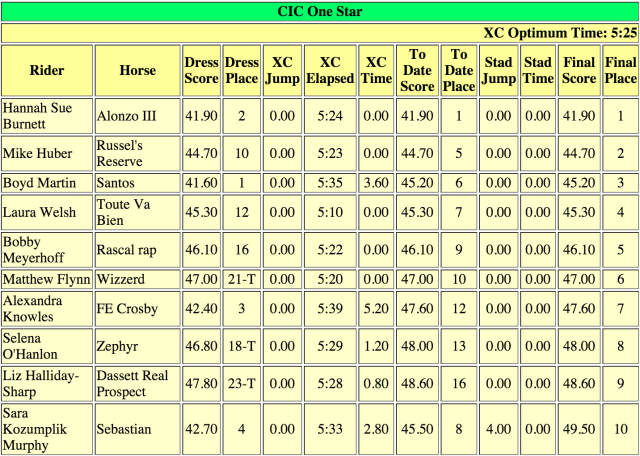