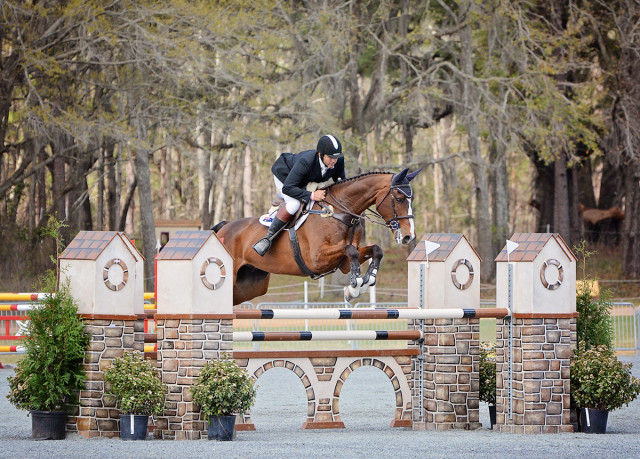 Clayton Fredericks’ morning at Red Hills took an unexpected turn when his one-star mount Subiaco crashed through a fence in the double combination on Fuzzy Mayo’s show jumping course. Betrayed by the laws of physics, Clayton pitched forward just as the horse’s head came up, splitting his chin open in the process.

Six stiches and four staples later, Clayton returned to the show jumping ring to defend his overnight CIC2* lead with FE Bowman, an 8-year-old Wurttemberger gelding he owns with Amanda Bernhard and Diana Crawford. “Bowie” jumped a beautiful clear round inside the time to bring home a wire-to-wire win on a final score of 42.6.

“After all the traumas that I had this morning, Bowie really had to jump clear for me!” Clayton said. “He’s really starting to mature.” (While he is starting to grow up bit, cheeky Bowie couldn’t resist a good spook during the victory gallop, nearly taking out an unsuspecting member of the ring crew in the process.) 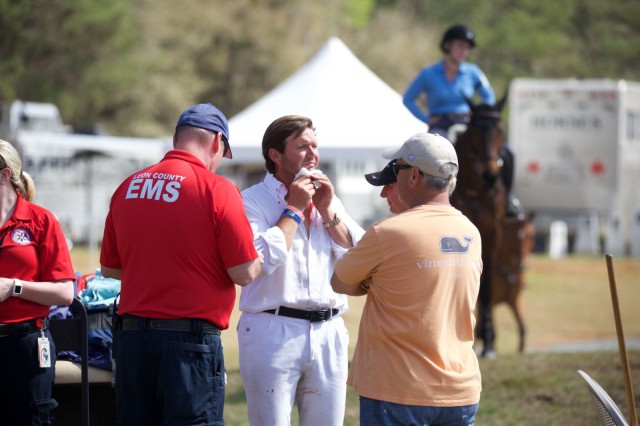 Bowie is certainly bred to jump. By Balloon, a son of Balou du Rouet, and out of a Cabaret mare, his pedigree is peppered with spectacular jumping horses. That prowess over fence has now propelled the horse to the second FEI win of his career, as Clayton and Bowie also won the CCI2* at Richland Park Horse Trials last summer.

“It’s great (to win). This sport is tough. You just have to keep taking a deep breath and remember why you’re here and enjoy the good bits because there’s a lot of other stuff that goes on that’s not so good,” Clayton said. “It’s nice to have to struggle a little bit to get your mind on the job and work through that process again. I think it helps me to coach (the riders) through that as well.”

Bowie will next aim for the Ocala Horse Properties CCI2* next month, though his competition schedule will then take a back seat as Clayton, who coaches the Canadian eventing team, focuses solely on preparing his riders for the Olympic Games in Rio de Janeiro. Both Carolina International and The Fork horse trials are targeted events for Canada, and their Olympic team will be selected soon after the final selection trials at Bromont in June. 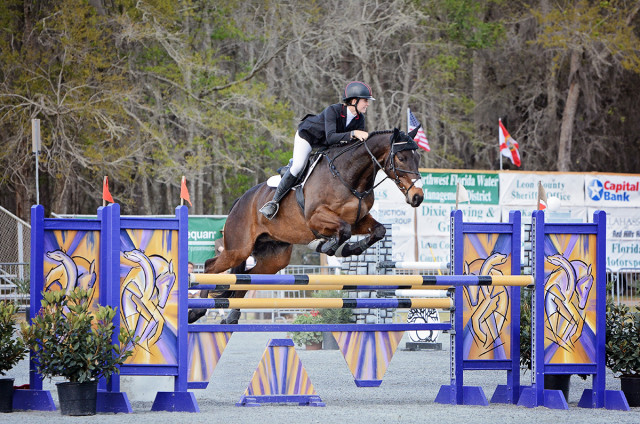 Caroline Martin and Effervescent were one of only three combinations to make the time yesterday on cross country, and they delivered another flawless jumping performance today to finish in second place in the CIC2* on their dressage score of 46.3. “Landon,” a 10-year-old Irish Sport Horse gelding owned by Sherrie Martin, is aiming for a big move up to Advanced at The Fork.

While it’s clear he’s ready to take that next step after a stellar performance across all three phases this weekend, Caroline said it hasn’t always been easy with this horse. JP Sheffield produced Landon (Limmerick x Macrocket) through Training level in England before he came to the States as a ride for Caroline three years ago, and it took time to develop their partnership.

“Taking the reins over on him was a bit difficult to get him on my side because I was a young rider. When I would make a mistake, he wouldn’t really accept it. It’s been a growing process, but I think now he has really clicked,” Caroline said. “He trusts me, and that’s why it was easy to make the time. He’s very adjustable. That’s why he’s quite good on the flat, but that might sometimes get in the way of cross country because he’s quite sensitive.”

You may remember that Landon had his 15 minutes of fame on the internet two years ago when Caroline’s air vest deployed after he slammed on the brakes in show jumping at Chattahoochee Hills, which spooked him badly enough that he went careening around the arena with Caroline clinging to his neck. (If you missed that video, click here to watch.) 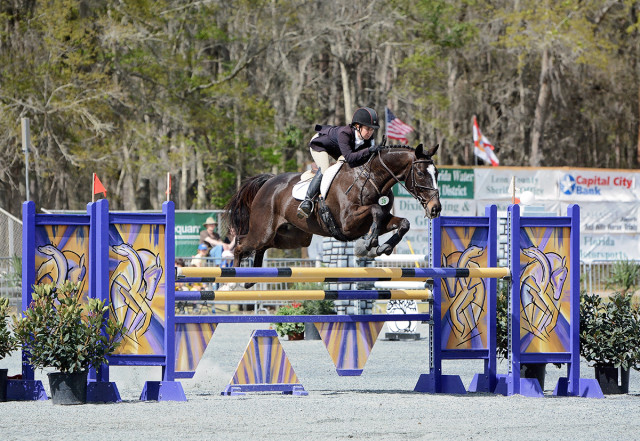 Jessica Schultz and her own Lock N’ Load were one of the only other combinations to make the time on David O’Connor’s new CIC2* cross country track yesterday. They came into the show jumping ring in sixth place and ultimately moved up to finish in third thanks to a double clear show jumping round.

A 14-year-old off-track Thoroughbred gelding (Doneraile Court – Be in Style, by Bering (GB), Lock N’ Load raced 17 times under the Jockey Club name In Don’s Court before starting his eventing career. Jessica got him off the track as a 3-year-old and has produced him herself through the two-star level while balancing a career as a nurse. We’ll update this report with quotes from Jessica as soon as we can catch up with her.

If you’re just tuning in to EN’s Red Hills coverage, Phillip Dutton and Fernhill Fugitive won the CIC3* yesterday, Hannah Sue Burnett and Alonzo III won the CIC* earlier today, and Lauren Kieffer and Veronica won the Advanced division for the second year in a row this afternoon. You can click here to view all our coverage and here to see final scores. 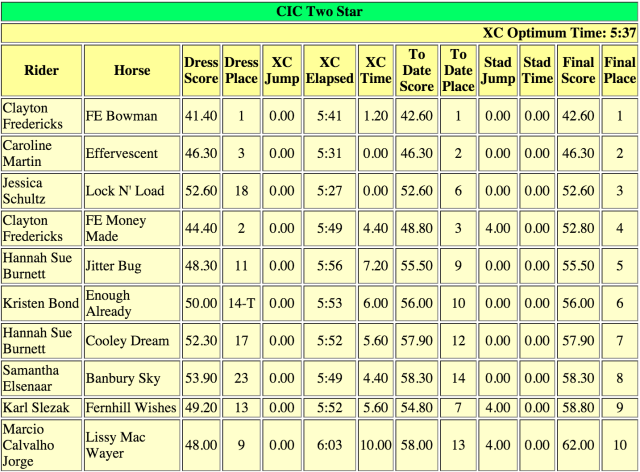