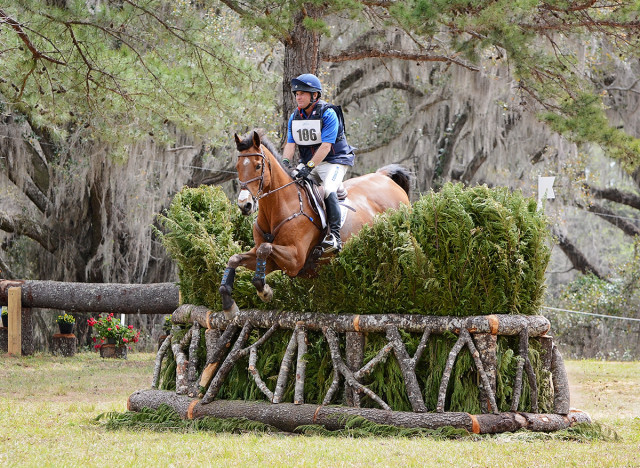 The optimum time is notoriously hard to make in the CIC3* at Red Hills International Horse Trials, and Phillip Dutton and Fernhill Fugitive added just 0.8 cross country time penalties to his dressage score after jumping one of the nine double clear show jumping rounds this morning to bring home the win on 43.2.

Ferrnhill Fugitive an 11-year-old Irish Sport Horse gelding owned by Tom Tierney and Annie Jones, has now won his last two FEI starts, having also clinched first place at the Galway Downs CCI3* in California last fall. This latest victory establishes “Jack” as yet another weapon in Phillip Dutton’s arsenal as we look ahead to the 2016 Olympic Games in Rio de Janeiro.

Jennie Brannigan and Catalina, a 13-year-old Oldenburg mare owned by Candace Kircher and Tim and Nina Gardner, tasted redemption when they also delivered a double clear show jumping round this morning to move up to second place. After their rocky performance in the $15,000 Ocala Horse Properties Eventing Prix Invitational on Tuesday, Jennie and Catalina looked very much back on their A-game today. 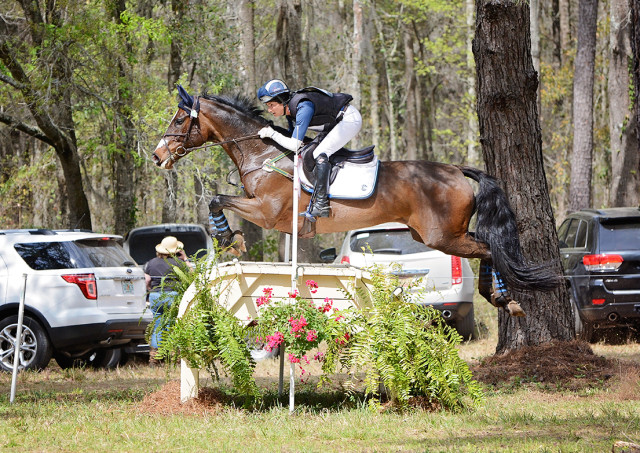 A clear cross country round with 5.6 time penalties saw Jennie and Catalina finish in second place on a final score of 50.0 in the mare’s third FEI competition at this level. After such a good showing in Tallahassee, Team Catalina has to be feeling pretty darn good about aiming for the mare’s first CCI4* at the Rolex Kentucky Three-Day Event next month.

Dressage leaders Hannah Sue Burnett and Harbour Pilot left the door open for Phillip and Jack to take the win this morning when they brought down the first rail of the triple combination and picked up 1 time penalty over Fuzzy Mayo’s show jumping course. Though that dropped them to third place, she can’t be too disappointed considering her longtime partner is finally back in business.

“William,” a 13-year-old Irish Sport Horse gelding owned by Jacqueline Mars, looks to be in beautiful form following his lengthy recovery from a tendon injury sustained at the Land Rover Burghley Horse Trials in 2014, and he jumped clear with 6 time penalties on cross country to finish in third place on 51.4. 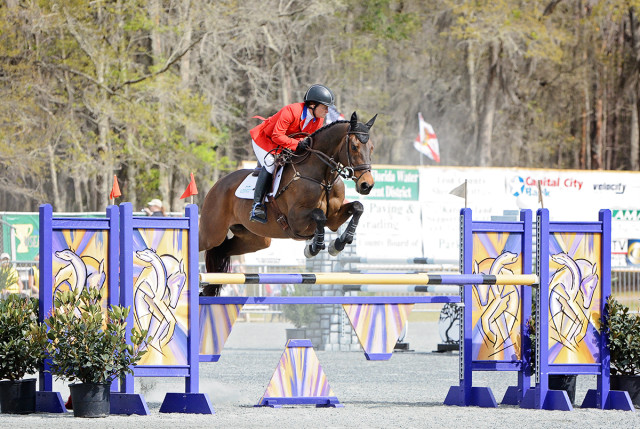 Selena O’Hanlon and Foxwood High, a 13-year-old Canadian Sport Horse gelding owned by John and Judy Rumble, had one rail down this morning and then jumped clear on cross country with 4.8 time penalties to finish in fourth place on 53.5. “Woody” hasn’t finished lower than 11th in any three-star competition in the last year.

Welcome Shadow continues to show she is a serious horse for the future for Boyd Martin. The 11-year-old Irish Sport Horse mare owned by Craig and Gloria Callen bested her previous best three-star dressage score by 8 points to sit in eighth place on 47.6 after the first phase. She only added 9.2. cross country time penalties to that score across the two jumping phases today to finish in fifth place on 56.8.

Sara Kozumplik Murphy and Fly Me Courageous, an 11-year-old Thoroughbred gelding owned by Debbie Foote, win the Biggest Mover Award for the CIC3*. After putting in the best test of his career to score 56.5 to sit in 25th place after dressage, “Ziglet” jumped a beautiful clear show jumping round and then delivered the second fastest cross country trip of the day to come home with 2.8 time penalties and move all the way up to finish sixth on 59.3. 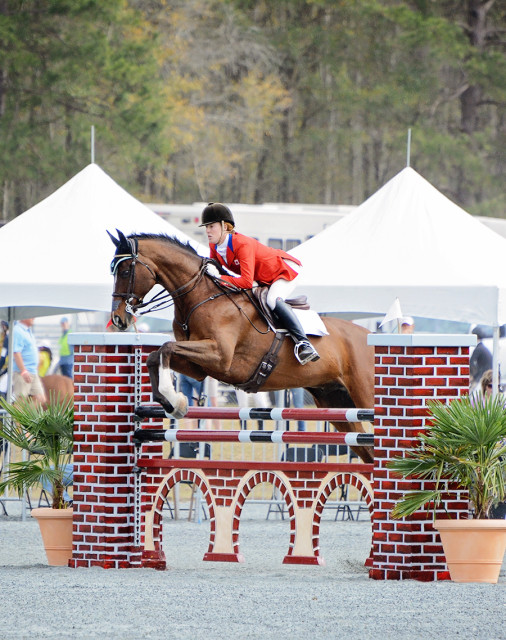 Ellie MacPhail and RF Eloquence finished the weekend in seventh on a personal best CIC3* score of 62.6. “Ricky Bobby,” a 12-year-old Holsteiner gelding owned by Sally Crane, danced his way to fifth place on 46.2 in dressage yesterday with a lovely test. One rail down in show jumping this morning dropped them to seventh, and the picked up 12.4 time penalties on cross country to stay in that position.

In addition to the pairs already named, the following combinations jumped clear and inside the time in show jumping: Lauren Kieffer and Meadowbrook’s Scarlett (11th), Lisa Marie Fergusson and Honor Me (12th), Jessica Phoenix and A Little Romance (14th), Lisa Barry and F.I.S. Prince Charming (17th), Courtney Cooper and Who’s A Star (26th), and Madeline Backus and P.S. Arianna (30th). 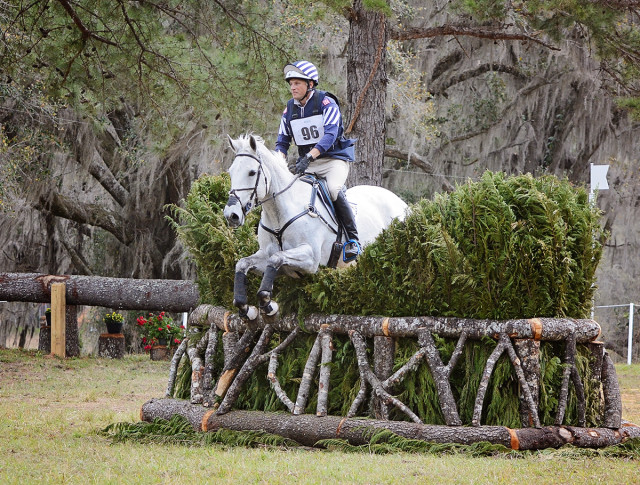 There weren’t any refusals in show jumping, but there was one fall when D.A. Duras plowed through the middle element of the triple combination and unseated Lauren Kieffer over his shoulder, which unfortunately eliminated them. Lauren was quickly back up on her feet and went on to compete all her remaining horses today.

Looking to cross country, there were only four refusals on course. Madeline Backus and P.S. Arianna glanced off to the left of the second angled brush in the combination at fence 4. Both Shawn Ferguson and Cruising Guy and Emily Hamel and Ramsey had runouts at the arrowhead brush coming out of the water complex at fence 15c. Courtney Cooper and Who’s A Star picked up 20 penalties at fence 12a, the first corner in that combination. 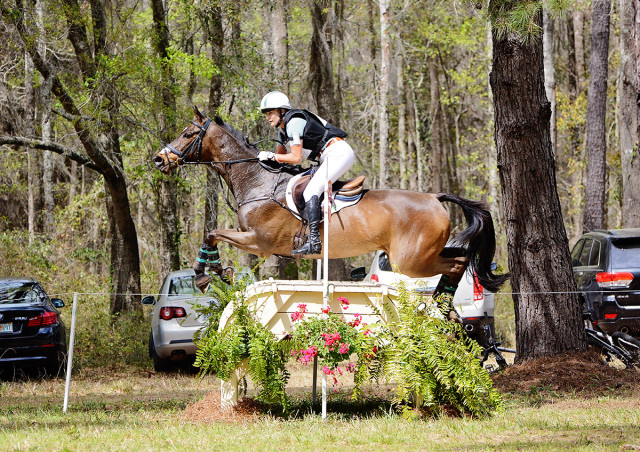 Daisy Trayford parted ways with Normandy Soldier at the angled brush at fence 4b when he got tangled up in the fence and stumbled on the landing side, pitching her off to the right. She confirmed to EN that they are totally fine after the fall, and the off-track Thoroughbred gelding enjoyed a brief tour of the grounds before being caught near stabling.

CIC3* course designer Mike Etherington-Smith made a huge effort to give this notoriously twisty track a more open, galloping feel, and it rode very well across the board with few problems, making for a safe day of cross country. We still have much more to bring you from Red Hills. After cross country in the other divisions, Clayton Fredericks and FE Money Made lead the CIC2*, Lauren Kieffer and Veronica lead the Advanced, and the CIC* is still underway. Stay tuned! 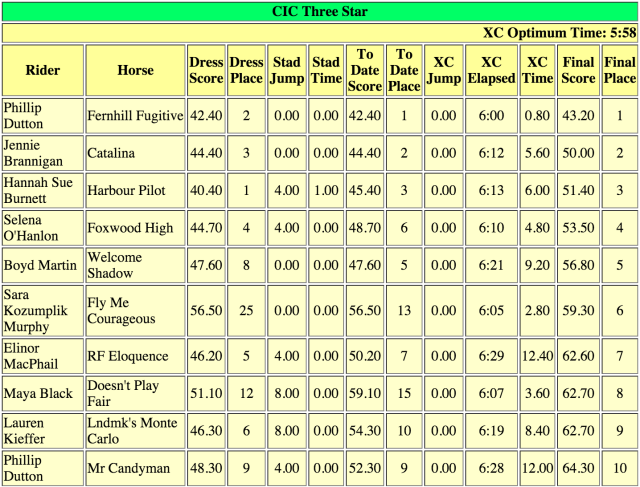