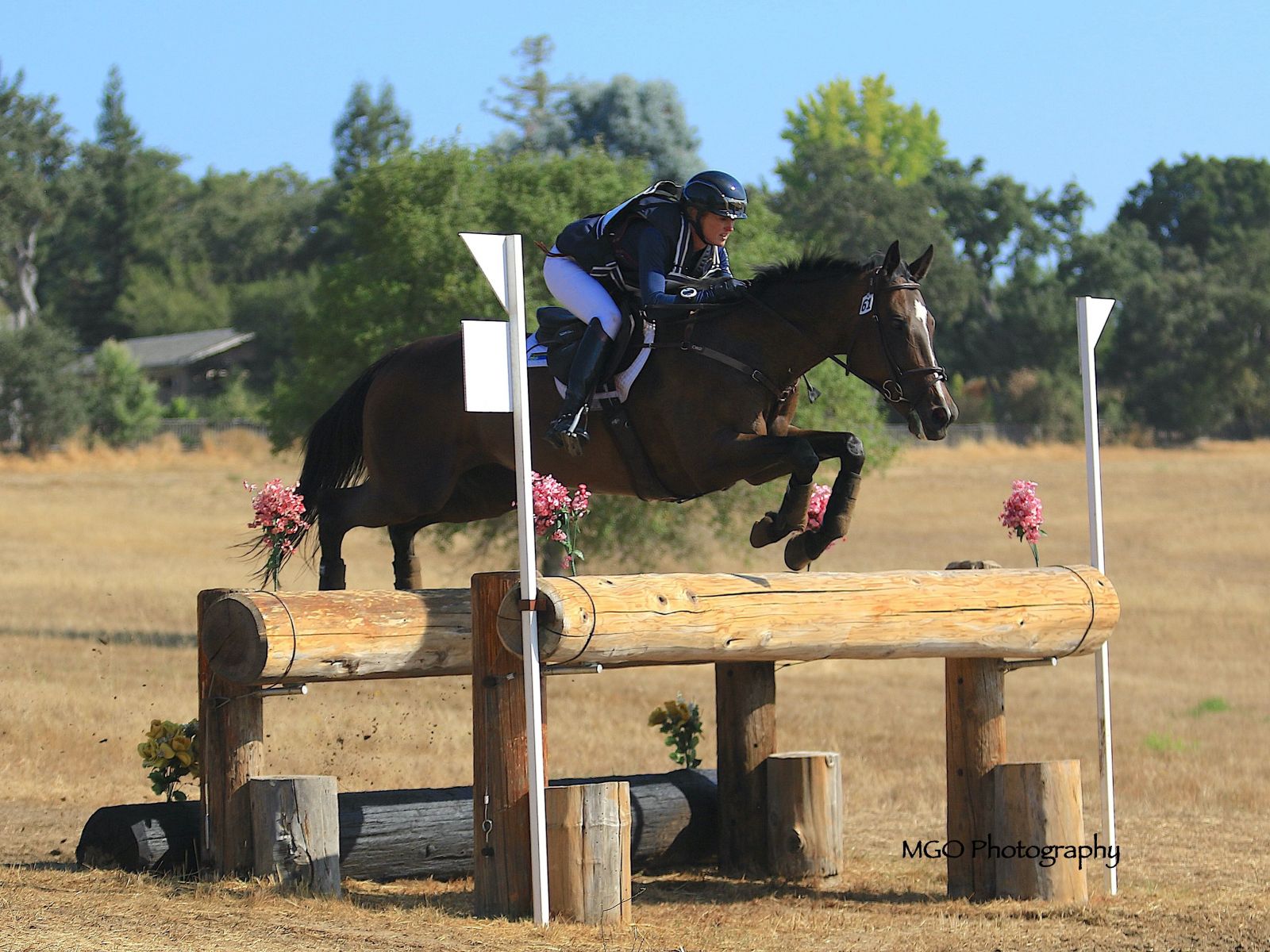 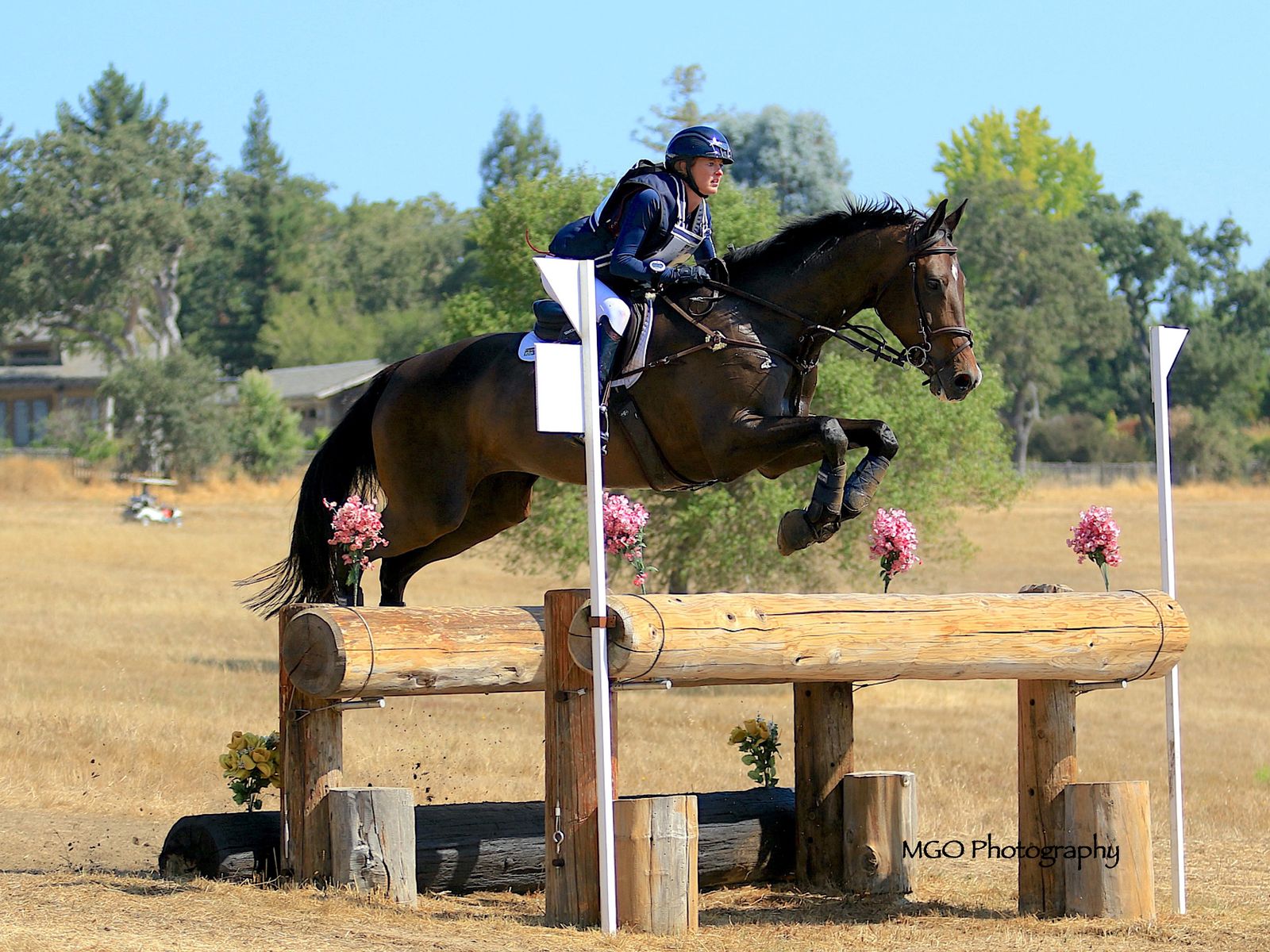 Last year at The Summer Event at Woodside, among the ribbons won and personal bests achieved, there was a quieter victory that represented a full-circle path for Paso Robles, Ca.-based rider Andrea Baxter. It was here that Andrea would ride her longtime five-star partner, Indy 500, and also her homebred gelding, Laguna Seca, the only foal Indy 500 has produced to date, over the same cross country track for the first time.

But in order to understand the brevity of this particular weekend in August, one must rewind the clock a few years, to a local tack store in 2013. 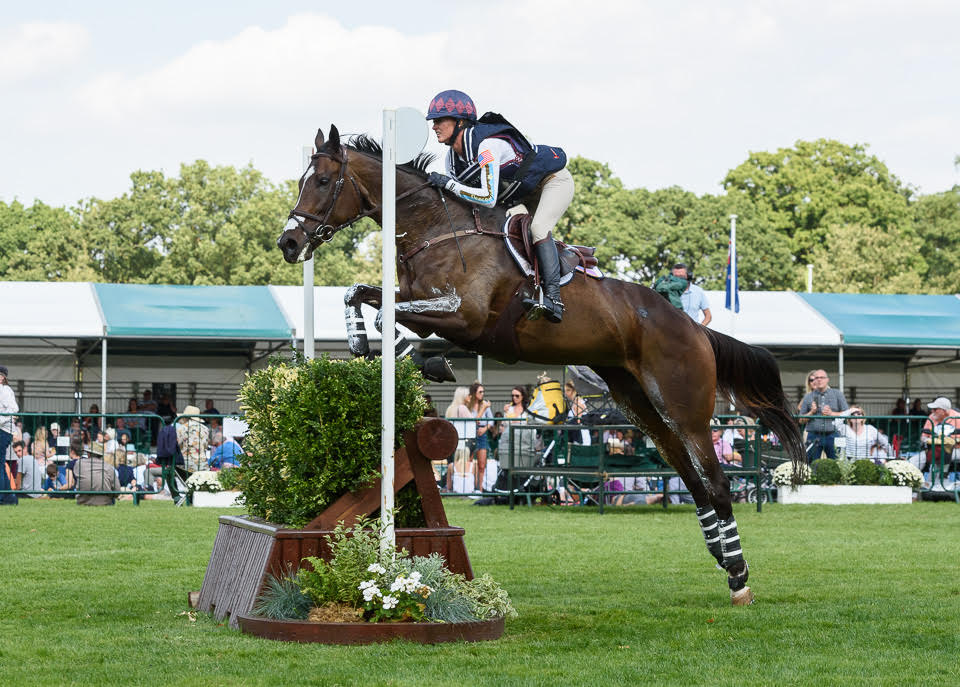 Andrea laughs when you ask her about how she came to be acquainted with the unassuming bay Thoroughbred mare, Indy 500. “I actually saw her on a flyer in a tack store when she was two,” she recalls. “She looked nice in the photo, but when I went to see her, she was as downhill as a wheelbarrow with legs the size of toothpicks. I passed, and when Indy was four, her owner called and asked if she could send her to me for training to be sold.”

In the lead-up to Indy’s arrival at Twin Rivers Ranch, where she and her family have put down roots and continue to put on one of the most popular events on the West coast, Andrea heard a slew of stories about the “crazy” mare heading her way. Yet when the mare stepped off the trailer, she looked around the property as one might imagine Queen Elizabeth sweeping the crowd upon arrival to a party, decided that this place would suit, and never once gave Andrea any behavioral trouble. “It’s like she took one look at Twin and decided she would stay,” Andrea describes. “I’d love to take credit for training the ‘crazy’ out of her, but she really never gave me any trouble.”

But the fact remained that Indy 500 was lacking in the conformation department. Still – upon appearances, at least – unsuited to life as a sport horse. Selling her remained a challenge, but in the meantime, Andrea took a liking to the little mare. “There was something about her,” Andrea recalls. “I would always go down to the barn and ride her first. And she was really trainable. I got her, unbroken, in May and by July, she was winning the four-year-old Young Event Horse divisions.” 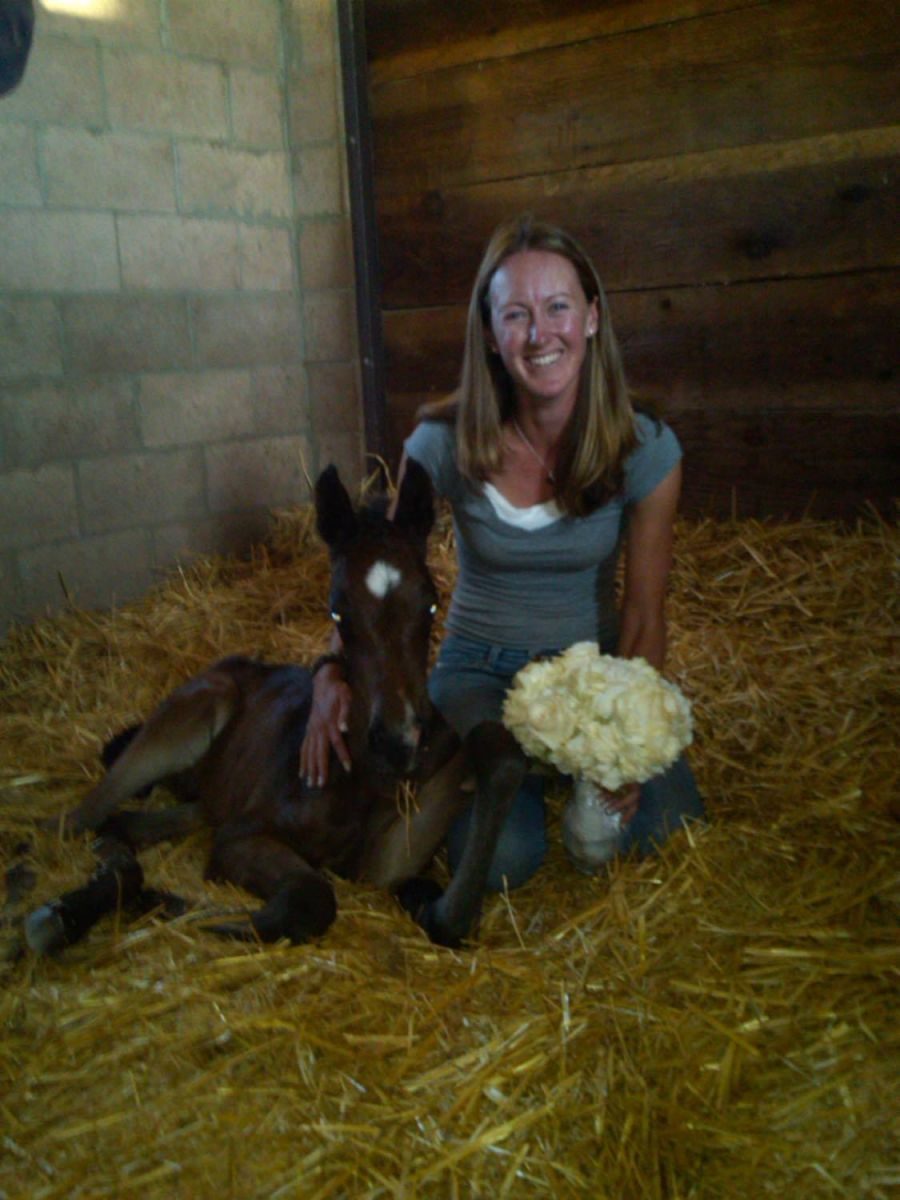 The next call Andrea made was to Indy’s former owner, Linda Miller. A trade was made, and Indy became the newest member of the Baxter family. Having gotten so much under her belt at four, Andrea decided to breed the mare rather than continue to push her training. More time never hurt anyone, she thought. On August 1, 2010, on the day of Andrea’s best friend’s wedding, Indy 500 gave birth to a leggy bay colt who would be named Laguna Seca.

Indy, however, did not take to motherhood with aplomb. She struggled to bond with the colt and also underwent several bouts of postpartum colic, one of which would necessitate a gut-wrenching decision from Andrea. “She colicked really badly during a big show at Twin,” Andrea recalls. “She wasn’t insured, and at the time I didn’t have the financial means to do the surgery. I had never had to make that choice before, and I felt awful. I was hysterical.”

Somehow – Andrea believes that a visit from Linda Miller truly helped Indy round a corner – she would make it through the night. And the next. “I swear, ever since that day she has been a fighter and just wants to be the best,” Andrea says. “It also made us really bonded – more than I ever have been to a horse. She didn’t start out as my favorite, but through that we became more connected.”

Andrea would go on to tour the world on the back of the little mare that could, completing 36 FEI events, to date, including three trips each to Burghley Horse Trials and the Land Rover Kentucky Three-Day Event and another overseas trip to Blenheim.

Meanwhile, back on the Ranch, Laguna Seca began his own journey, waiting in the wings. 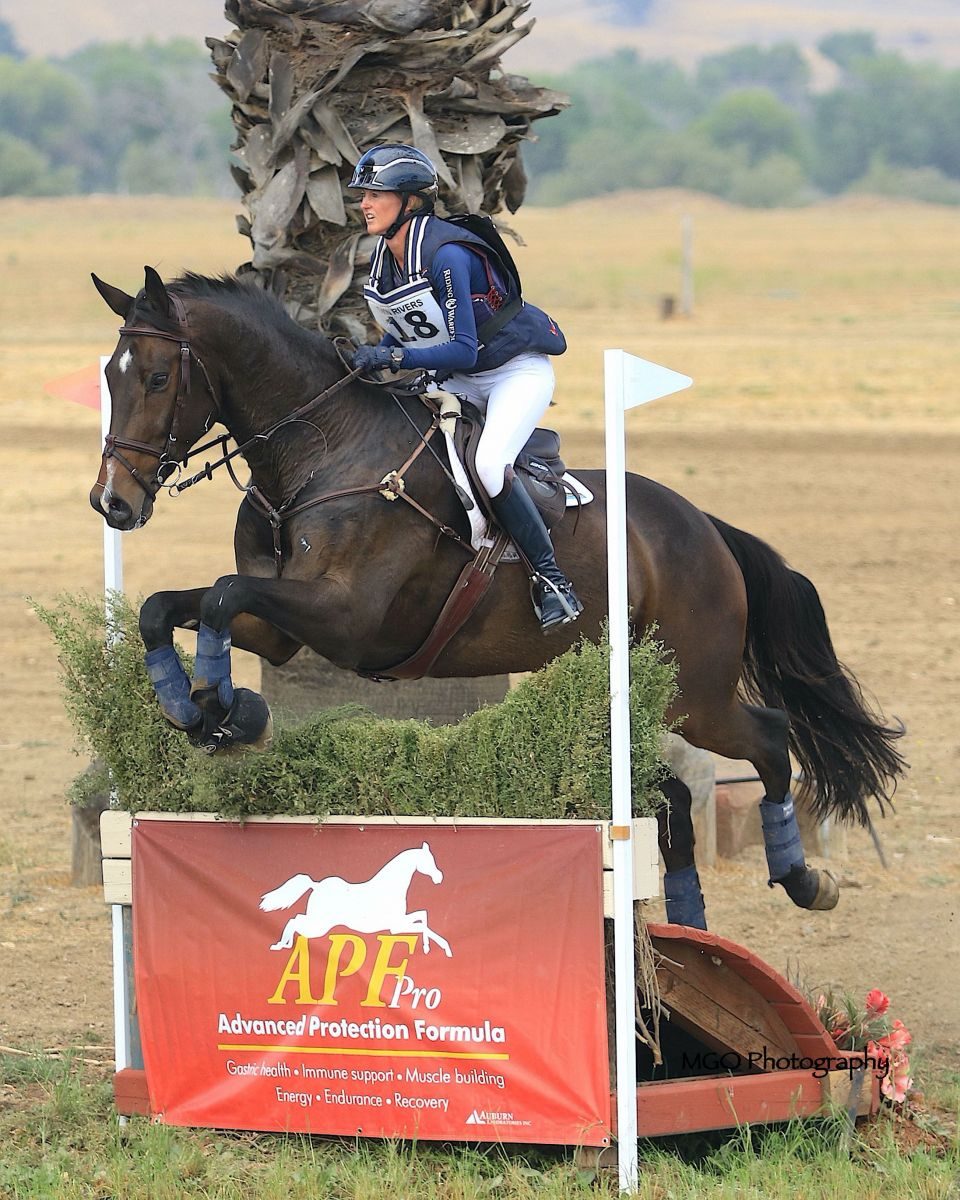 Andrea and Laguna Seca at Twin Rivers in 2020. Photo by MGO Photography.

For what Indy 500 lacks in size, her stallion match and Laguna Seca’s sire, Linaro (Landgraf – Calypso, by Ladykiller), has it in spades. It was a bit of luck that led Andrea to choose the Holsteiner stallion stood by Fox Fire Farm, who has also sired upper-level horses such as Betawave (Robyn Fisher), Uphoria (Frankie Thieriot-Stutes), Let’s Go DF (Earl McFall), and Lafite (Liza Horan).

Andrea and her mother, Connie, share an affinity and a knack for breeding (Andrea’s first five-star mare, Estrella, was a homebred out of her Young Rider partner, Say Grace), but the options for fresh semen this late in the season, for a maiden mare, were limited. Nonetheless, the match was made, and Laguna Seca was everything one would imagine a top event horse to be: tall, refined, athletic. “He was always a really good looking horse, but when I started to break him in he was a real pain,” Andrea laughs. “He was a weird mix of super lazy and super reactive. He was also really big,LONG, strung out, and hard to put together.”

Andrea, who is 5’6”, said putting her leg on the big horse was challenging. Couple the size with the “baby brain” and the “random acts of terrorism” and reactivity and, well, one can guess how well it went. After chipping away and struggling with “Junior” for his four- and five-year-old seasons, Andrea enlisted the help of a longtime friend with slightly longer legs: Tamie Smith. 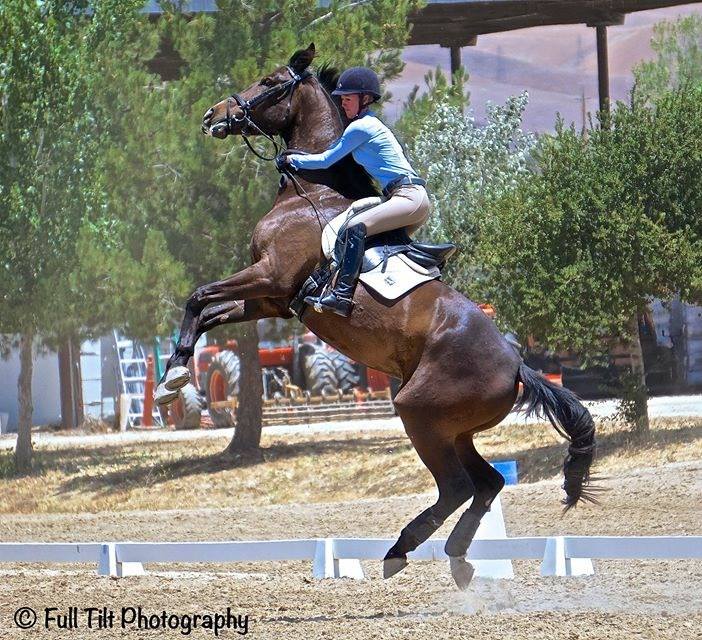 “When he was six, I sent him to Tamie,” Andrea recalls. “He needed to be stronger, but he wasn’t yet ‘broke’ enough and I wasn’t big enough to put him together.” Andrea would also later hand the reins to her good friend and business partner, Bec Braitling, and credits both her and Tamie with helping her produce Junior, now affectionately nicknamed “T-Rex”.

All systems were go with the young horse’s education until, as things often go with horses, “Junior” turned up not quite right getting off the trailer at Rebecca Farm in 2017. After extensive testing, it was discovered that the gelding had somehow fractured his hock; veterinarians couldn’t pinpoint exactly when, but the absence of arthritis indicated that it was not an old injury. There was a surgical treatment option, but it was relatively unknown and had not shown overwhelming success. So Andrea opted to give the horse a year off.

11 months into his time off, Junior was still not quite right on the leg, prompting Andrea to try the surgery. Why not?, she reasoned. Despite whatever misgivings she had, the surgery turned out to be a success; Junior had two screws placed in the hock and “he’s never been sounder”.

Two years later and Junior is hitting his stride. He’d shown flashes of brilliance – Tamie Smith even showed interest in him for herself while she had the ride – but now he was gaining the miles to back it up.

Laguna Seca, who is 11 this year, has now made the step up to the three-star and Intermediate level, and Andrea says she’s elated to be realizing these goals with the son of her horse of a lifetime. 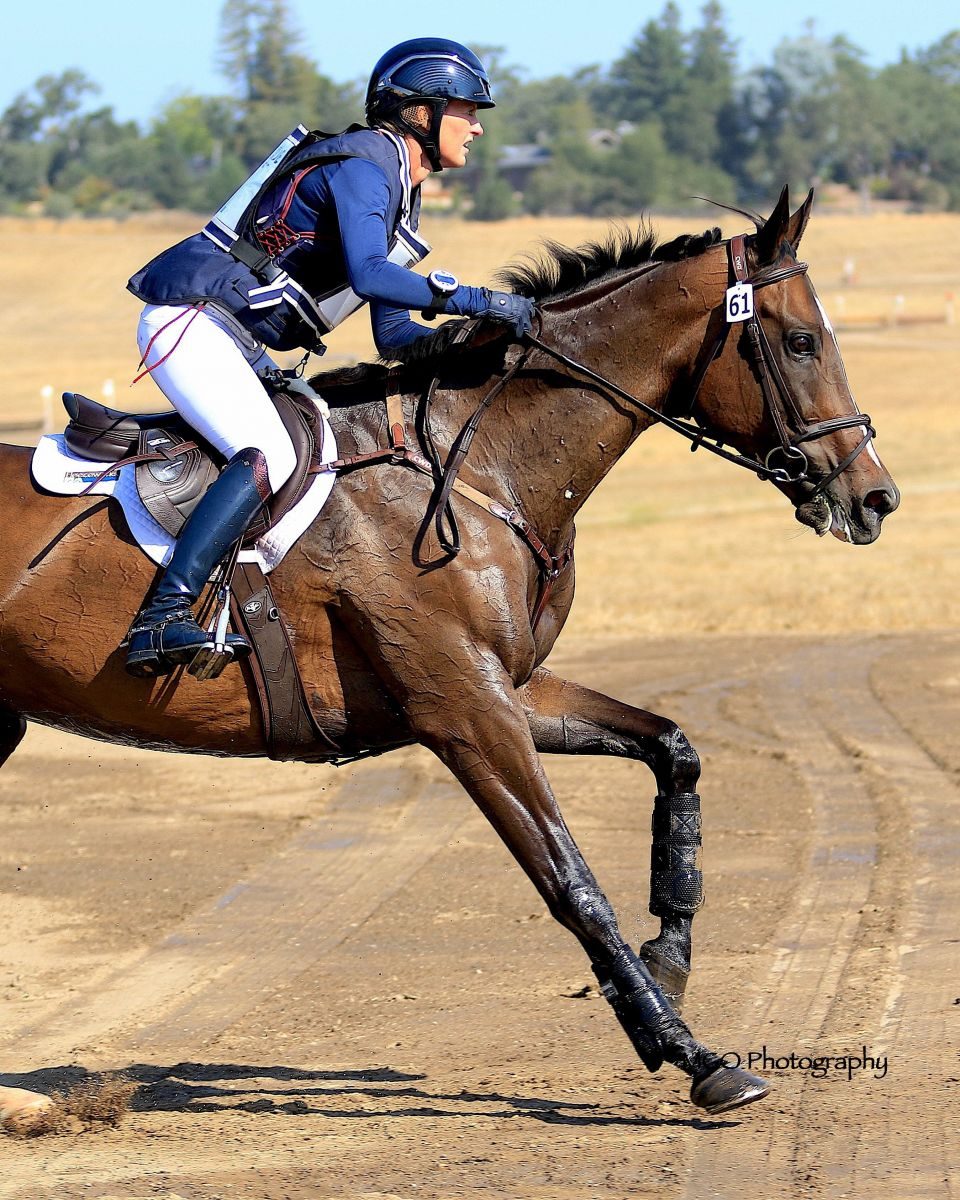 Andrea and Indy 500 at Woodside. Photo by MGO Photography.

More Than Worth It

This perfect breeding match may have yielded Indy 500’s only descendent, too. Andrea has tried, unsuccessfully, to breed using oocyte (egg) retrieval and embryo transfer with her mare in the years since Junior arrived, but Indy appears to have other plans. “I’m just not sure she wants to play that game,” Andrea says now. “She doesn’t seem to even produce a viable egg to harvest or inseminate, which makes Laguna Seca that much more special.”

And so if the tall and striking gelding is to be Indy 500’s only son, how poignant it was that the plans aligned to place both mother and son – and the woman who has bonded with each of them – on the same cross country course. This brings us back to that moment at Woodside Horse Park earlier this summer, where both mother and son – along with Andrea, the owner, rider, and breeder – jumped clear around the same track, on the same day; Indy 500 was running the Advanced/Intermediate and Laguna Seca was entered in the Open Intermediate.

“It was the same cross country course,” Andrea explains. “I got the pictures and wow – they looked exactly the same. I really enjoyed following Tamie and Bec riding him, but it really didn’t hit home until then that I got to ride them at the same competition. Indy hadn’t really been at the same shows.”

Of course, coronavirus and the horse health gods-willing, there is more yet to come in the career of Indy 500, who has herself benefitted from a “lifetime of fitness” and the addition of treadmill work in the extended off-season. Her dressage scores are dropping, and she’s one you feel confident will jump around the biggest tracks with much enthusiasm. And following close behind will be Laguna Seca, maybe destined for some of the same famous eventing grounds that his mother has galloped across.

It was as if Indy knew the doubts others had about her. Everything you said she couldn’t do, wasn’t suited to do, would never be good at – she has done. Laguna Seca is just one more emphatic “yes, I can” to add to the list of Indy’s accomplishments. “She always wanted to prove to me that she was worth it,” Andrea says. “Which she has more than done.”