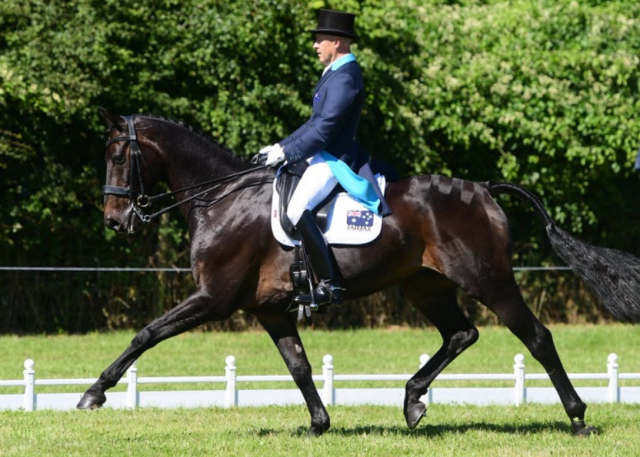 Seven-time Olympian and three-time team gold medalist Andrew Hoy (AUS) is maximizing on a non-Olympic weekend by tearing it up in the Event Rider Masters Division at Gatcombe today. He and Cheeky Calimbo scored a 36.6 at the storied event to lead the 38-horse pack going into show jumping Sunday morning.

His nearest competitor is Oliver Townend and Cillnabradden Evo, who sit on a 39.1. Oliver had a strong test aboard the ten-year-old Irish Sport Horse whom he acquired from Andrew Nicholson at the end of last year. The two have had a strong season together, winning the CIC2* at Alnwick – Burgham just last week.

Izzy Taylor and KBIS Briarlands Matildo round out the top three with another strong score of 42.9, less than a point in front of Paul Tapner and Yogi Bear VIII. With many riders across the pond in Rio for the weekend, this top four is no surprise; it was more of a question as to which order they’d come in and who can give themselves the best head start going into the jumping phases tomorrow.

Katherine Coleman and Longwood are the lone American contingent in this division, and they currently sit in 32nd place with a dressage score of 55.3. Katherine and Longwood have been on fire in the cross country phase and solid over the poles all year — especially since crossing the big drink this spring to compete in Europe — so we predict to see a strong move up the rankings tomorrow from these two.

We’ll also expect to see strong jumping phases from Blyth Tait (NZL) and Bear Necessity V who sit in 13th, Maxime Livio (FRA) and Pica D’or who are in 14th, and Nicola Wilson and Bulana, currently in 19th. 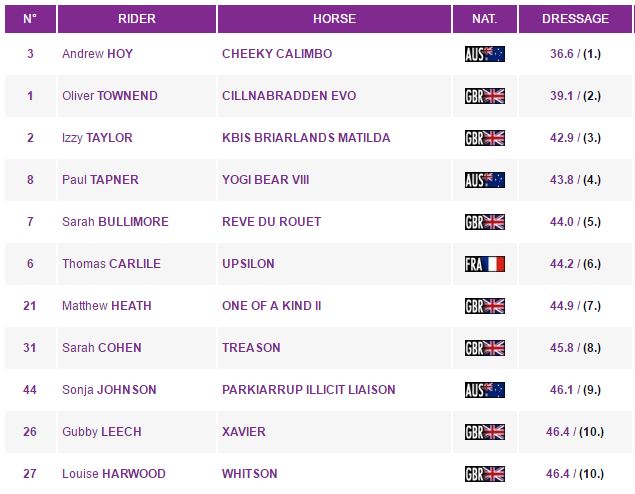