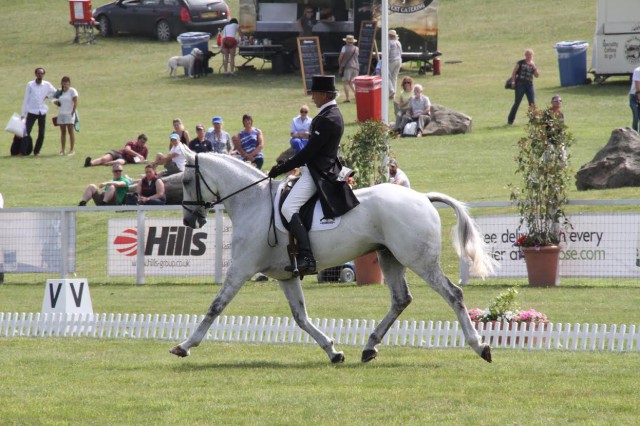 Much hype is buzzing at Barbury Castle this weekend as Andrew Nicholson and Avebury seek their fourth consecutive win in the CIC3*. They’re off to a strong start, putting in a lovely test to score a 33.9 to win the dressage over a field 100 deep. Mark and Rosemary Barlow’s 15-year-old gelding has had a relatively light 2015, but he came out swinging today to best the nearest challenger by 3.2 penalty points.

Naturally, this weekend will be anything but a dressage competition, but Andrew and Avebury will be putting forth their strongest effort to clinch a historic win come Sunday. Andrew was pleased with Avebury’s efforts today, and seems quietly confident for the rest of the weekend.

“I don’t warm Avebury up for too long, I trust him, he is fifteen now and knows his job,” Andrew said in a press release following the day’s competition. “It’s mission accomplished so far, it’s only a starting number but it’s a good one, and it would be great to make history again by completing a four timer here at Barbury.”

As expected, the leaderboard shifted quite a bit with today’s riders, and it’s now Francis Whittington and Easy Target who will take second position into tomorrow’s show jumping on a score of 37.1. Catherine Witt’s 14-year-old Irish Sport Horse gelding was withdrawn at the final horse inspection at Rolex earlier this year and has since had an easy go around the Open Intermediate at Nunney last month.

This is another pair to take very seriously this weekend — they were second at Barbury last year and have bested their dressage score by a hefty amount to put them in an even better position in 2015.

China’s Alex Hua Tian is well-mounted this weekend with the third placed dressage horse, Don Geniro. This is an exciting young horse, an 8-year-old British Hanoverian gelding owned by Sarah Higgins, Pip Higgins, Pam Dews, and Peter Scholefield, who was second in the CCI2* at Le Lion last year. This is Don Geniro’s first CIC3*, and he seems to have taken to the dressage test quite well with a 37.3 to take into show jumping.

Andrew Nicholson held the lead after the first day of dressage with Nereo and will now settle for fourth place overnight, certainly still well within striking distance just 4.4 penalties behind Avebury.

Sir Mark Todd also made a statement today with Leonidas II, earning a 38.4 from the judges for fifth place. Leonidas II placed fourth at Badminton earlier this year and was ninth at Barbury in 2014. The field is certainly not lacking experience this year!

Two other newcomers are now settled within the top 10 after today: Pippa Funnell and the ever competitive Redesigned in sixth place, Sarah Bullimore and Lilly Corinne, who brought her A game today for a 39.5 and seventh place, and Francis Whittington with Hasty Imp, who shaved nearly 8 penalties off of his dressage score from Barbury last year for ninth place.

The CIC3* pairs will show jump tomorrow beginning at 9 a.m. local time / 4 a.m. EST. If you’re feeling extra ambitious, you can catch the live stream which can be found here. We’ll have much more from Barbury throughout the weekend, so keep an eye on EN for the latest news.