Andrew Nicholson joined a team of 12 jockeys in this year’s St. Patrick’s Day Derby Charity Race, benefiting the Injured Jockey Fund. Held at the Cheltenham Festival in the UK, the race was a grueling 1 mile and five furlongs long with a gallop up the famous Prestbury Park Hill.

Here he comes! On course. pic.twitter.com/RTBDAhsXRb

Andrew piloted Golden Jubilee, who is trained by Nigel Twiston-Davies, to a third place finish behind favored winners James Collins aboard Knights Parade and runners-up Hayley O’Connor and Hurricane Ridge. Andrew appeared to have a good trip around the track, holding a mid-pack position for the majority of the race with his signature galloping style in full use.

“Much better than doing dressage! Very exciting,” Andrew said in a post-race interview. “It’s a shame the start was a little bit slow because I was in a good position the first time. But I think I would have had a job to catch the first two. I really enjoyed it.”

We’re thrilled to see Andrew having a blast in the irons on the track, but we must say we’re quite happy he’s a part of our eventing community. The St. Patrick’s Day Derby looked like great fun for a wonderful cause, and that’s something we can all get behind.

To enjoy this video replay of the St. Patrick’s Day Derby from RacingUK, please click the screenshot below or this link. 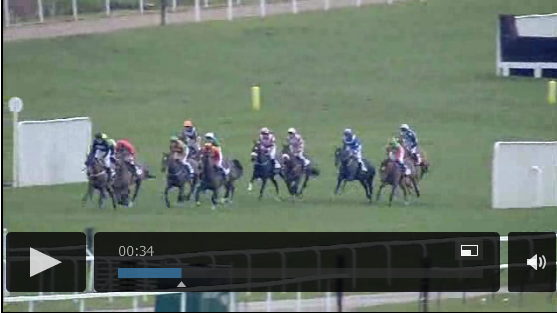